Computers are past masters at that!!!

I used to know somebody who repaired various electronic things, and he got hold of an electronic doorbell kit that would allow you to record your own sounds. He managed to make a recording that he called "Self Repairing door bell". The bit that was clever was the intonation for the second bit; it sounded questioning. You will have to use your imagination, but it went something like this;

How about this for a laugh;

Hell Razor5543 wrote: How about this for a laugh

That is priceless James... Had me howling!
Top

Computers are past masters at that!!!

Indeed. Add to the equation that it's a machine which is 23 years and a few months old and it obviously makes things even more "interesting" from time to time. It's had time to develop a sense of humour over those years.
Top

And a very dry one if the sense of humour a lot of the old stuff I play with is anything to go by...
Top

This one is a particular master of "it worked fine until I put the case back on." Which is a particular pain in this case as getting the case back on in this case is a bit of a faff because of the gigantic power supply umbilical hanging off the back of the top cover (the 16A flex is kinda overkill but was the only thing with three cores that I had to hand when I put it together when the original power supply died - at some point I will actually hack the lead off the dead supply and make it so the PSU plugs in again).

In fairness though, I really can't complain at its reliability given how long I've had it and some of the bodgery it's put up with over the years.
Top

Speaking of senses of humour there is of course the sense of humour exercised by the original designer of the piece of equipment...

A typical example.. The other week I was very lucky to acquire a duff spectrum analyser dating from the early 80s. Fault was severe field non-linearity and lack of height on the CRT display...

Then it's impossible to run it for test purposes without reassembling the whole thing... The fault turned out to be dried out electrolytics in the end but it took hours and hours and hours to sort simply because of the necessary disassembly and reassembly to get to them. I didn't replace the duff one, I replaced the lot wholesale... Don't want to have to repeat the task any time soon...

Closer to home, to swap hard disks in the old Lexia 2 diagnostic machine means a complete and utter strip-down to the last component

Put another 525 miles on the Xantia from MK to Aberdeen. Haven't worked it out precisely yet, but 50mpg plus again...
Top

How long time driving did that take Zel? I'm curious incase I fly down in the future to retrieve my car.
Top

Too right it was!

Takes me roughly 8 hours driving time plus any delays. Can pretty much do it in my sleep now to be honest!

It's not a bad drive really so long as the traffic plays ball, always gets a bit congested around Birmingham (I always use the toll road) and Glasgow, but so long as nobody has an accident it's usually fine.
Top

Gave a long time friend a brief shot of my Xantia today, then showed him what they change hands for.

Was later spotted poking around Autotrader.

Suspect we may have a future owner inbound...
Top

So here she is, back home after a busy weekend. Little under 2000 miles in four days. Managed just over 50mpg on the way up, and 48mpg on the way back down (which makes sense, given that the weather was awful on the way up so I was having to take it easier, whereas it was lovely and sunny today and the road was virtually empty, so was in full juggernaut mode - legally of course). 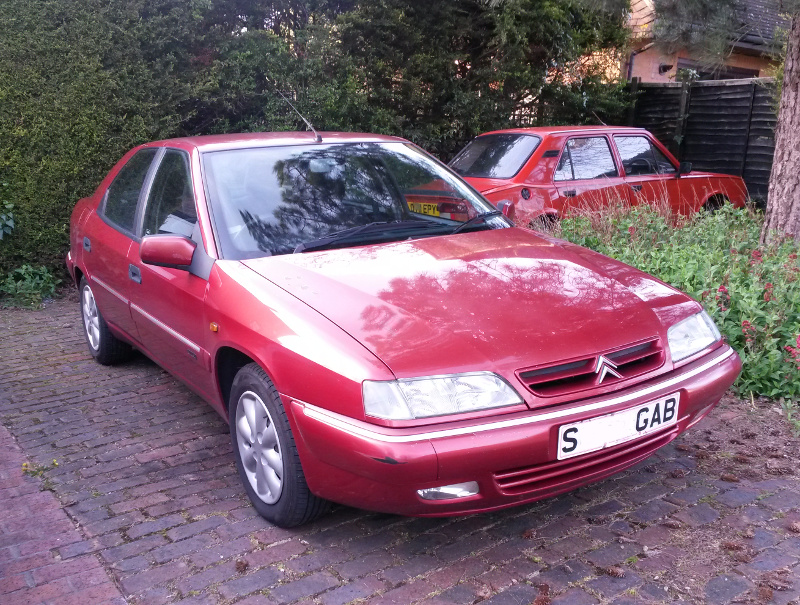 Hasn't missed a beat all weekend despite the best efforts of the weather, and will now be treated to a well earned wash to get rid of all the salt, and a routine service which is just coming up to being due.

Couldn't have asked for a better companion on a long run like that to be honest (well, unless I'd had a chance to find and fit cruise control!), have never had a car before which could be such an effortless motorway cruiser. Saab will happily cruise at the same speeds, but you're much more aware of it - Xantia just rockets along with total ease. The diesel torque allowing you to just instantly dial an extra 20mph onto forward speed to overtake almost instantly without even needing to drop a gear is nice too...

Would have made it in less than eight hours too save for the one bit of traffic I hit - all of 30 miles from home too!

I do have to admit that I really enjoy long distance driving like this, not sure why, just do!
Top

Okay, Murphy's having a go at me again...

This morning our guests from the US arrived, staying here for the next couple of weeks. About 20 minutes after we got in the door I got a phone call from my father's care manager up north. She gave me the news that he has passed away. Given the state of his health (both mental and physical) lately to be honest that really might have been a kindness, he really didn't have any quality of life left and never really got over my mother's passing a couple of years ago.

Seriously though? This week...any other and I'd pretty easily have been able to drop anything and leg it up there to sort things out. Currently frantically shuffling things around so I can get up there to get things sorted out and closed off. Clearing the house is going to be the biggest headache...suspect it may be another "hire as big a van as I can get hold of and drag it down here" job again, probably even then will take a few trips...at 8 hours or so each way apiece. Oh what fun.

So if I'm largely off-grid for the next couple of weeks, that would be why.
Top

Zel, you have my condolences. Terrible news (although I understand the feeling it was a kindness), and, as you said, any other week and you would be able to deal with the situation. I hope that your guests are understanding.
Top
Messages: 5148