Hell Razor5543 wrote:I recall one occasion where somebody parked their original Mini across our driveway when Mum had to go out. She was not best pleased, so we (Mum, Max (my step Father), and I) moved the Mini. We left it neatly parked, but none of us (read that as ALL of us) noticed that we had left it on double yellow lines. Half an hour later it had a ticket on it. Said idiot was not impressed, as a week or so later they parked a bigger car across the driveway again (we saw them doing it late that evening), so this time we all moved it somewhere else. The result was a major traffic jam the following morning, due to a car parked across a major junction. The police got involved, but their attitude was that the driver got what they deserved, and clearly indicated that the driver was in trouble, either way, and that WE were not to blame.

You're too polite James. Some oik in a MK2 Granada blocked the haulage depot entrance many years ago by my gran's house.

They just got the forklift out and dumped it in the hedge opposite.

If we had use of a forklift truck we would have placed said car somewhere awkward, but as all we had was muscle power we were limited on what we could do. Still, that idiot never gave us any more problems.
Top

Not washed mine in months...

One advantage of mine being sliver is it doesn't seem to show the dirt very badly...
Top

One advantage of mine being sliver is it doesn't seem to show the dirt very badly...

Got some new mats for it today , it needed a good hoover out. Feeling how I am this week, I couldn't be bothered so it got taken to be done. I shall service it soon. I can't really be bothered but I have all the bits and it needs doing.
Top

Was that the mats you ordered from c1oc shop arrived at last?

Sent from my SM-G361F using Tapatalk

No I gave up on that toss-pot. I ordered some from Amazon and sent a form to my credit card company to dispute it. He reckoned again on Monday that he'd resent them as Hermes screwed up (I can believe that) ..
Top

In fairness, we lost three jackets that were sent via Hermes because the driver "couldn't find our house" and had held onto them in the van rather than return them to the depot.

...Um, we're in a street with a grand total of eight houses on it, two minutes from the city centre...How can you not find it?!?

Regarding the school transport nonsense, it really is stupid. The school has a tiny catchment area (as pretty much every neighbourhood here has their own school), and the vast majority of them live *well* less than a mile away. Last winter one of said idiots managed to get stuck, in their supercharged Range Rover, and was failing to realise that you can't just Clarkson your way out of trouble on ice. I ended up intervening because they were sliding progressively clover to my cars, and proceeded to tow said Range Rover off the pavement, and back up the hill with the Xantia - which at that time had absolutely rubbish tyres on it. She was not best pleased.

...She lives a grand total of 850 yards from the school...literally up our road, around one roundabout and they're there. It surely takes them longer to get the kids into the car, belted in, to reverse out the drive and then park up here than it would to walk...I just don't get it.

Anyone know if the wings just bolt on to the 107? ...Still have nightmares of getting a wing off a Lada Riva, that was held on by approximately three million seven hundred thousand one hundred and ninety-three spot welds...
Top

Yes they are bolt on..

My missus always walks the 400 yds to school, comes back, gets the car and goes to work.

Me? I take the car, drop him off and carry on on my way. I know plenty of other parents simply drop the kids off however close they live. Oddly, for where we live, we don't have any Chelsea tractors. The only one that could be described as such is a P reg Hilux Surf owned by an Italian mate of mine!
Top

Still keep meaning to get my mate who has a coach to "just happen" to come down the road at school kicking out time, stand back at a safe distance then watch the chaos unfold.

...it's fitted with the horn from a US freight train too...ideal for such situations.
Top

The problems here aren't caused by the school run at all. It's a bit haphazard but that's because of commuters using our estate as their own private parking spaces and creating havoc for everyone. Only a couple of days ago badly parked cars caused someone to swerve to miss an unseen car coming on a blind bend and this happened.... 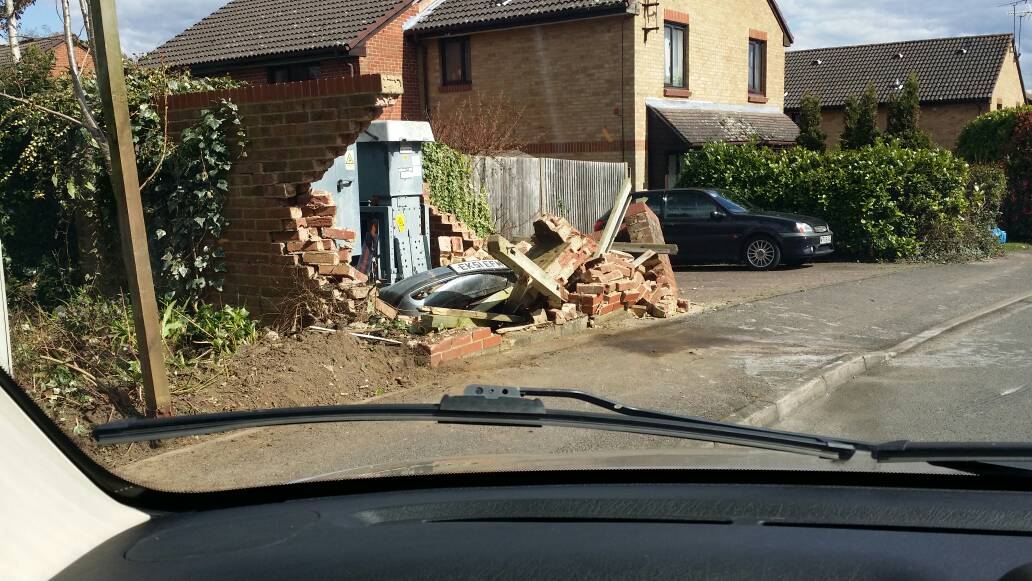 Taking photographs of dents on black cars is surprisingly difficult.

This is the damage sustained by the poor 107. Ignore the partly detached bumper, that's from a completely different incident and there's a new bracket on the way to finally sort that now it's off the torturous commute it was on before when that happened. Wheel cover came off a lorry going in the opposite direction when it hit a pot hole and sent said wheel cover straight into the front of the 107 - thankfully not on the radiator side! 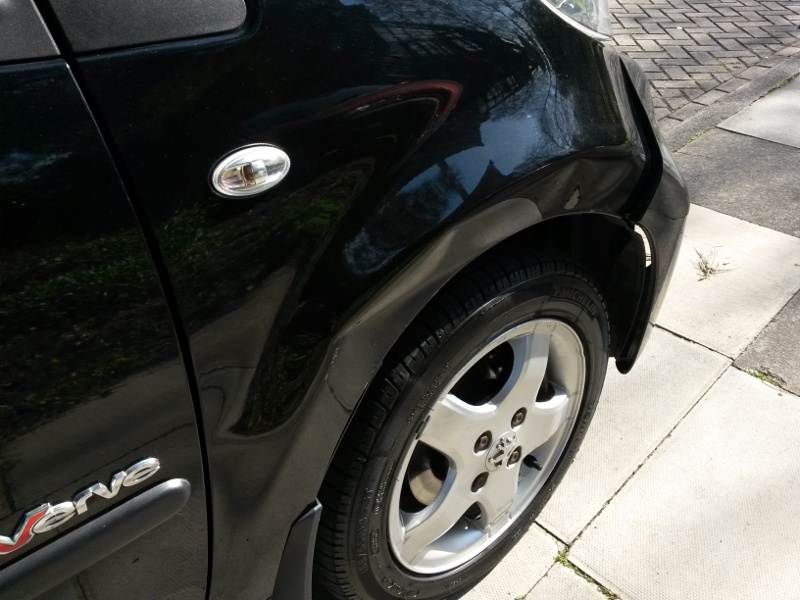 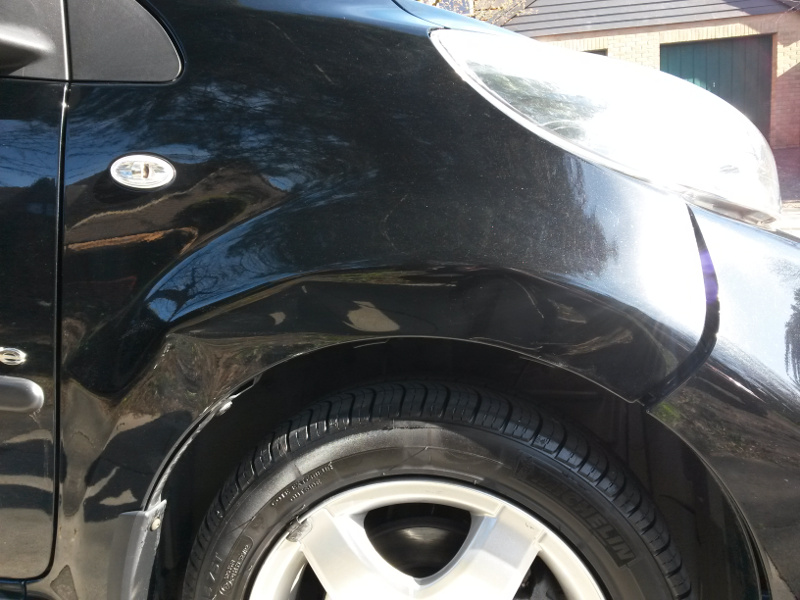 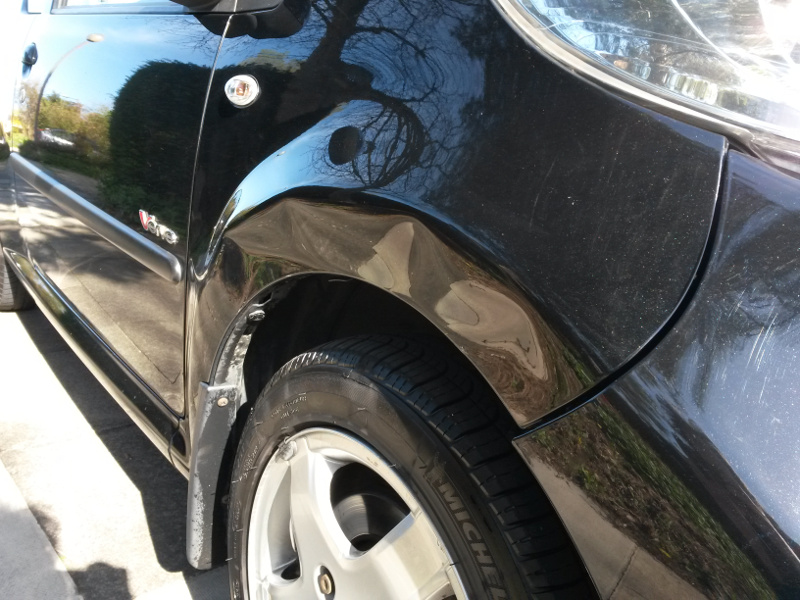 Very little done to the cars this week save for the 107 getting its MOT and a valet as I've been going pretty much flat out getting the garden in order. Built a surround for the raised bed out in the front garden and then have started getting the fences painted. ...and continued painting...and painting...and painting...We have far, far, far too much perimeter fence. Oh...and installing the automatic window opener on one of the skylights in the Atrium...about 30 feet up in the air, when I'm not comfortable with heights, that was "fun" work.
Top

Book time 1.5 hours to change the wing. Words (if you pm me your e-mail, I'll send you the PDF with the pictures!!):

Unclip and remove the embellisher ( 1).

Not a bad job at all then to swap a wing... No welding involved at least!

Zel, will you be getting a new one, having that one panel beaten or something else?
Top

Haven't really decided yet. Will ask around at a few body shops and see what they say, if it's going to be big money or difficult to sort will likely look to get one from a breaker. At least I'm led to believe that Raven Black isn't a massively rare colour!

This evening was planned to be productive, then my Amiga decided that it didn't want to talk to its hard disc any more. Of course this problem was resolved by dragging the "box o' drives" out of the loft, removing the case, testing out a few potential candidates and then trying the original one again. As this machine has proven to me on many occasions now, the threat of replacing any component immediately makes it behave again for several years further. It's been churning away at intense HD activity (looping benchmark) for a couple of hours now and seems quite happy. Got to love problems that fix themselves.

My guess is that it was probably just oxidation on the IDE connector pins. Have a few potential replacements anyway if this one does fall over, it's only a 260MB drive at the moment anyway, and could probably do with a bit more room given that I'm actually using it these days for something other than pulling disc images off the floppies and throwing them at the network for UAE to use. Can easy throw in one that's a few gig without problems. Not sure what the volume size limitation is for the Amiga Fast File System, but 4.3GB works just fine as I've previously run one that size in this very machine before I stole it for something else...
Top

I know not a lot about computers Zel, but a 107 wing in black to bolt straight on shouldn't be too difficult to source.

Computers are past masters at that!!!
Top
Messages: 5230