The Model Y will be coming to the UK, probably 2022. Ticks most of your list, plenty of poke, panoramic roof, occasional or regular dog room and plenty of people room (not much less then the Model X) and price new (when it arrives) probably comes in there or thereabouts with a second hand model S.

I always tend to go to fully charged for a review. Extract from it what you can.

Probably the biggest thing which would put me off the Model Y (which I'd honestly forgotten even existed) is probably the interior. I'm not a big fan of the ultra, ultra, ultra-minimalist design in the Model 3. Just a matter of personal preference, but it's just not my favourite.

Plus by 2022 it will need to have everything incorporated in terms of the latest generation of government mandated driving "aids" such as automatic speed limit enforcement enabled by default on every journey won't it?

I don't dislike the idea of having that as a feature that I can switch on - but the whole idea of having it forced on me because the government has said so just puts my back up.
Top

Zelandeth wrote: ↑
20 Jun 2021, 13:32
Plus by 2022 it will need to have everything incorporated in terms of the latest generation of government mandated driving "aids" such as automatic speed limit enforcement enabled by default on every journey won't it?

Yes it would be enabled by default every journey, but as of now there would be a turn off choice, but returned to the default "on" condition every restart.

The Tesla Model Y may escape seeing as it was in production before 2022, with the new rules just applying to new models in production after 2022, and then to all new cars from 2024. If you chose to buy a TESLA, their own monitoring and safety features are way ahead of the EU and UK's mandatory safety features which are being introduced.

It would be difficult even buying a used TESLA to escape the clutches of the TESLA data harvesting machine on the tracking of your driving behaviour. You may even opt to take out TESLA insurance, which I did give an airing to here...very big brother.

I think the "big brother" side of things is pretty unavoidable these days, heck the systems in any modern VW, BMW etc are pretty much constant contact with the outside world anyway. If anyone wants to perform analysis on the data behind my driving habits...meh, it's boring enough I couldn't really care. I just kind of accept that's just part and parcel of buying any modern car and going in with my eyes open.

Black box based insurance things is a worry though as it tends to be very critical of hard braking and acceleration - and would basically consider you a blithering lunatic undertaking any normal journey in Milton Keynes!

Systems like automatic speed limiting being turned on every journey without any option to change that behaviour would be a deal breaker for me. Just like on a lot of petrol cars not being able to chose whether I can turn on/off stop-start systems and just have them stay as I've set them until *I* change them, rather than when the car or some government official deems that I should.

Just the inability to turn stuff properly off for me is where there's a line crossed between assistance and interference.
Top

Not been much to report on the fleet really. My Covid jab left me feeling pretty well wiped out for a few days - nothing really to write home about, just absolutely dead tired. Having hurt my hand also largely put me off doing much in the way of practical work.

Feeling more myself today though and my hand is pretty much sorted (though it still looks an interesting colour of purple), so took TPA out for a run today to get some errands run. 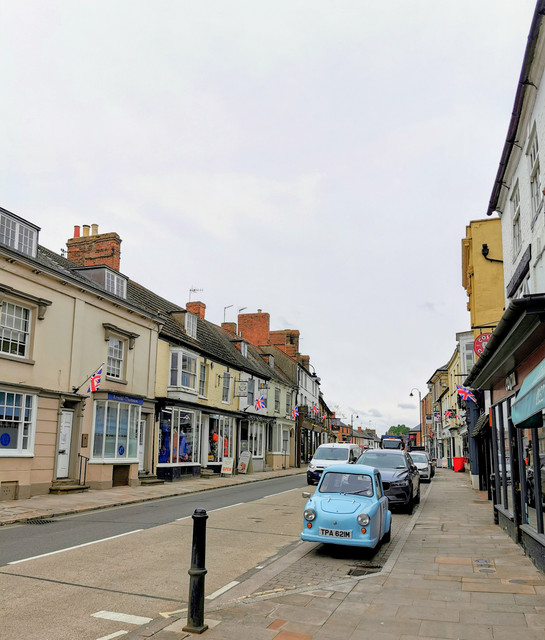 Seemed to dodge the worst of the weather too, given that it rained quite heavily just before I went out and just after I got home. Was a little breezy for her on the A5, but nothing too drastic. Just meant made a point of keeping the speed down a bit and being ready to counter the inevitable wobble at a couple of points.
Top

Nice empty streets, just the way I like them.

Is that Jimtown?
Top

Towcester on this occasion. Last couple of times I've been over Jim's way the place has been really busy. Good for the businesses, not so good for the likes of me when nobody's making any attempt to keep their distance etc.

Unfortunately had to go into the town centre (briefly) yesterday and in the main shopping centre in the ten minutes I was in there I must have counted 40+ people not wearing masks despite there being signs about every twenty feet saying they were mandatory. Can't quite tell if people just don't care or if they really are just that oblivious...

If the latter, it would explain a LOT of the nonsense I see out when driving on a day to day basis I guess.
Top

I was in Gloucester today, the main square is being rebuilt for the umpteenth time so one of the roads alongside the defunct Debenhams store is closed off with contractor's fencing, nothing else needs to or can access to the area it's just an empty street, there's a solitary car parked and the blessed traffic warden sticking a ticket on it.

I was in Gloucester today, the main square is being rebuilt for the umpteenth time so one of the roads alongside the defunct Debenhams store is closed off with contractor's fencing, nothing else needs to or can access to the area it's just an empty street, there's a solitary car parked and the blessed traffic warden sticking a ticket on it.

Sounds like me trying to get to the Argos store near here the other day. I must have driven around in circles for an hour trying to fathom out how to get into the blasted car park as their diversion notices (all three of them) just send you around in circles. Eventually I twigged that you had to drive through the privately owned car park of the Morrison's supermarket at the far end of the road to get into it. Half a dozen ways *out* but only that one way in!

If I'd found signage like that on a set of works back when I was in Aberdeen I'd have had a conversation with the site foreman and hopefully got it sorted. If I went back after 24 hours and it was still as bad I'd have had another conversation with him, except this time his ears would probably be ringing for days. If that didn't work I'd have set the gent who ran the street occupations team on them. Lovely guy, but you didn't want to cross them...They had been in the game a long while and knew every bit of legislation involved backwards and wasn't afraid to use it. They were also well aware that where contractors doing work on the public highway was concerned that much as the contractors didn't like to admit it...They needed us a lot more than we needed them, and that we could make their lives WAAAAAY more difficult than they could make ours...So it really was just best to do what the council told them. It was always interesting when you'd dragged someone into a meeting because they were repeatedly doing something stupid and they started out with the air of "We're (let's just call them a major national telecoms firm...), you can't tell us what to do!" and there was a very distinct point where they usually realised the truth of my previous sentence and rapidly started backtracking frantically and falling over themselves to be helpful.

Saw one "major services provider" get kicked off their own site and us hire in a private contractor to make good the mess they'd made, billed to them, and then they had to return under the watch of said contractor to complete their work at a date and time we decreed to be suitable. All completely needless if they had just used common sense and played by the rules in the first place. Not totally sure how they expected us to NOT notice them taking the A96 down to one lane right before a major roundabout in rush hour in the run up to Christmas (when there's already an embargo on any street works on main routes other than emergency repairs in place) and digging it up to route services into their new block of flats...The tail back reached all the way to the city centre, you could probably have seen it from orbit. "We thought we'd be done before we bothered anyone..." didn't really cut it as an explanation.

Really would be nice to get out somewhere to grab some more interesting photos one day... 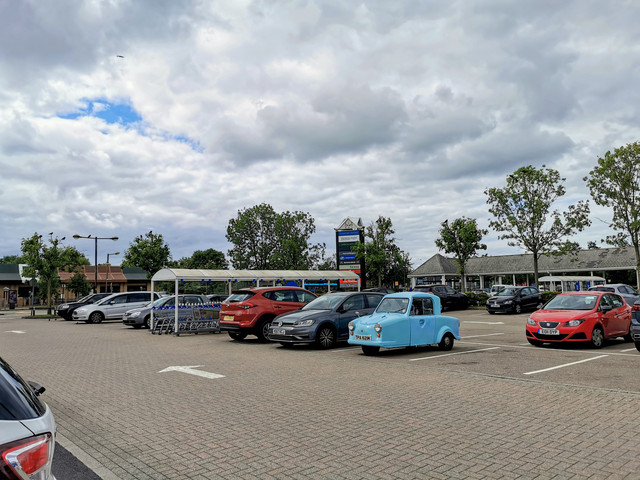 Though she did tick over 13K miles today. Quite astonishing how much more quickly that has rolled round than 12K took! 350 plus change miles to go and that will be two thousand miles she's covered under my ownership.

Once we get there it will be time for a proper service again. Oil, filter, check plugs, check points, clean fuel filter & carb inlet screen, check and adjust valve clearances, change gearbox and final drive oils, grease driveshaft slip joints, inspect CVT belt, check front wheel bearing, grease all the grease points, adjust brake shoe free play...and probably half a dozen other things I've forgotten. Aside from the obvious "have a good crawl around in, around and under the car and address anything which seems amiss."

To be fair the thing on there which probably takes the longest is actually removing the service hatch in the back of the cabin to get to the gearbox/CVT/final drive assembly as it's a bit fiddly. Well, aside from the valve clearances anyway. Though at least I have new rocker cover gaskets this time so not trying to save those will save me a few minutes.
Top

Well, Thames Water recently got their wrists slapped (albeit very lightly) for causing avoidable chaos in the Wandsworth Council area;

just before your 2,000 miles in ownership servicing trigger

I liked the Triplex toughened windscreen label capture against the blurred outside view through the windscreen and the 13,000 odometer in clear focus. Its turned out to be a nice image

Did you engineer the location for the 13,000, rather than a stop when it happened naturally approach

Though she did tick over 13K miles today.

I wondered if these might interest you Zel? I'm thinking that is a Commodore 64 at the front!

I'll be staggered if that goes for the estimate... Anything with a Commodore logo on from that age seems to attract a lot of "serious" collectors.
Top

The only thing about this lot is that it is in a general house clearance sale so may slip under the radar of serious collectors. I only came across it because I am looking for some special glassware for a friend! You never know it may go for a song!