I remember this problem making it onto something like Watchdog.
Top

Gosh! That is amazing Zel

My parents had a curved shower screen door go the same way. Makers were not surprised, and said quite a few go.... Toughened glass is all very well - until you break it! We've got it in our greenhouse and have lost a few panes - clearing it up is a right pain, as there are tiny fragments everywhere.
Top

Not been up to much in the last couple of weeks, though I did drop the Saab off for a mini-valet at the weekend as it was turning green and was full of dog hair.

Right idiot wasn't I? Went and forgot that it doesn't have a clearcoat so the traffic film remover has stripped all the wax off leaving mat streaks all over the place. Rookie mistake. No damage, it just needs a polish and wax (which it did anyway!).

Think I have now sealed the water ingress point on the Xantia as well...if it's still leaking now it's definitely getting in somewhere other than where I thought it was. Was planning to double check this evening, but lost a significant chunk of today to trying to figure out how on earth to work Blender, which has to be the most aggressively user-unfriendly piece of software I have ever encountered. Sure it's fine once you've got used to it, but as a first time user it's shall we say...somewhat daunting. Will fall back to Sculptris if I can't get along with it, but I'd rather not as that means having to boot the PC into XP mode and that sounds like hassle.
Top

I have a working cooling fan again...sort of!

When I was up in Aberdeenshire dealing with The December From Hell, it developed a fault whereby the moment you turned the ignition off the fan started cycling on and off...stopping again when the ignition was turned on. Odd. Given it was well below freezing and I wasn't doing town driving, I just pulled the relay.

Still no idea what the heck is going on, but have just attached an appropriately rated switch to the front of the relay box. If I'm doing driving around town, just turn it on manually. Not bothering to wire it into the car as in the spring I plan to pull the nose apart to sort the loom under the rad properly, so it's just a stopgap.

In celebration of having working active cooling again took her out for a good old Italian Tuneup. Still surprises me how well that car can get up to speed for having 90bhp with that kerbweight. Think the driver of the Audi who was tailgating me thought the same - not that he could see me until I got to fourth gear for the soot! Few roundabouts later running much cleaner though, still a bit of colour on full throttle, but what do you expect at this age?
Top

Spotted this evening when I got back from walking the dog that the Xantia's undertray is hanging off at the back.

Will try to get that sorted tomorrow then...
Top

You mean it's still got one Zel? Amazing!!!
Top

Yep! Even still has the cover for the sump plug, that was in the boot when I got it. Took me a while to figure out what it was. Put that to one side with the intention of refitting it, then an excess of real life intervened and I've not the foggiest idea where I put it...
Top

You'll find it when you're not looking for it Zel!
Top 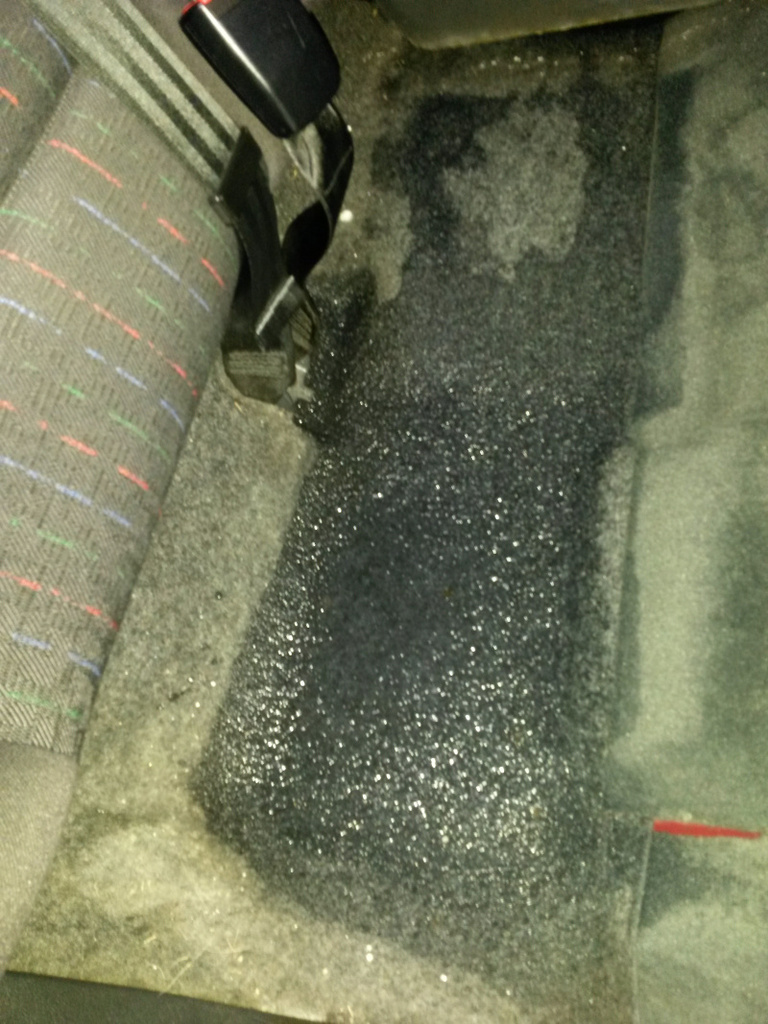 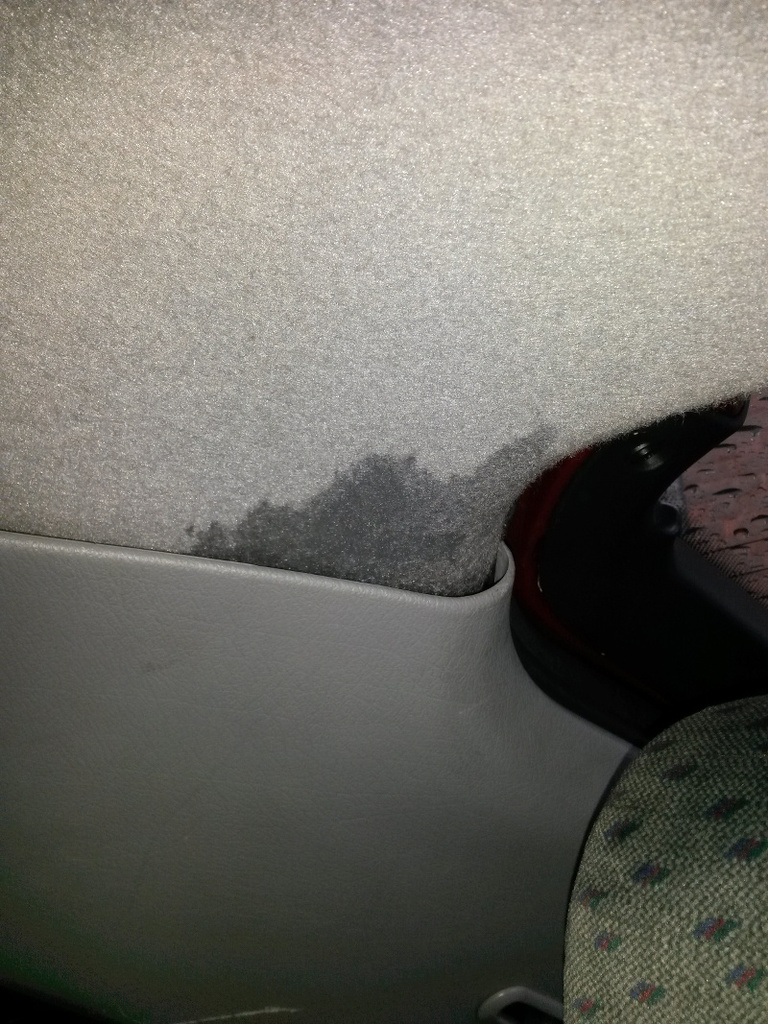 It's actively dripping in, but I cannot for the life of me figure out *where* it's getting in. Best guess at this point is the actual line between the B pillar and the roof panel? The paint in there does look a little cracked, so it's not impossible I guess. 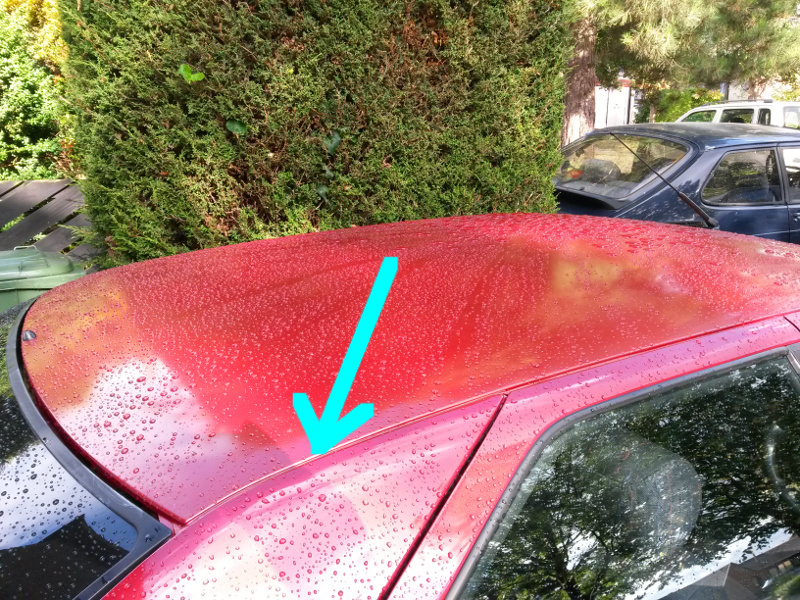 Area around the bootlid hinges and the bonded panel joints there has been thoroughly sealed up, so that's out. Gave the area around the cabling from the bootlid a going over too just in case, even though it's so far recessed I can't see it getting wet. The seal itself is in good condition and is properly seated. The water is *not* creeping in under the seal as it might appear in that photo - the area actually under the seal is bone dry. It's not getting in around the washer jet and running along the pipe...so I really can't see anywhere other than the seam mentioned above that it can possibly be getting in from!

This problem is really starting to get on my nerves. Can't really do much about it right now as it's tipping it down out there.
Top

Gonna have to get the headlining out....

I had a similar leak on a BX, that I am pretty sure was the roof to side panel joint. It sealed itself up after I carried a heavy load on the roof rack.....!
Top

I don't know about irritated Zel, more like irrigated...

Check the tops of the rear wheel arches were you may find bungs sealing 9or not) the holes for the sunroof drains if a sunroof was fitted. I know yours hasn't but worth checking all the same...

Car hasn't been driven since yesterday (when it was bone dry) so don't see how it could be getting in around wheel arches or anything like that - will check anyhow though, it's definitely dripping in from above (hence the damp patch of headlining you can see). The hatch seal seems to be fine, and the boot area is bone dry - it's getting in some where around the top of that pillar then running down the back of the plastic trim, behind the plastic bit that's behind the rear seat back by the door closure, and appearing under the rear seat.

Because that whole area is double-skinned it's just about impossible to actually track where it's coming from.

The seam between the pillar and the roof panel seems to be about the only possible ingress point left unless the water has figured out some way to actually phase through the metal itself...

Thankfully it hasn't made it as far as the floor, as drying those carpets and the sound deadening out sounds like all manner of fun!

...Not that I'm not considering taking them out anyway as I'd really like to attack them with the pressure washer and some carpet shampoo as the driver and passenger footwells are areas that do look like they've done 200K miles and it bugs me!

The headlining is already pretty mutilated back there, I reckon from the previous owner trying to figure out where the heck the water is coming from...Though it does mean that I can get access to the area above it at the back - and that achieves absolutely nothing as far as figuring this out it turns out.
Top

It would be a bit rough, but maybe worth it to find out, run clear bathroom sealant along the joint and see if that stops it? If it does then find a way of a permanent repair.
Top
Messages: 5231