Come and see me for No.4 Zel, I'll show you how

As I say, a proper cranked ring spanner is your friend...
Top

Might take you up on that Jim at some point. I'll have another look too, had run out of daylight yesterday though, and suffice to say my nerves were a bit frayed by then after discovering that someone had previously mangled the threads on no 3.

At least it's not quite such a priority now as the car does now have four working plugs, even if the one in no 4 is maybe past its prime. Have noted on the servicing label for them though that no 4 remains to be done so shouldn't forget at least.
Top

Well took it out for a test run today, what a difference.

Power delivery has always been a bit "lumpy" for want of a better term, that effect is now completely gone and power delivery is now silky smooth. Really didn't expect that to alter.

Discovered while doing this that the hose clips on the PCV hoses need changing (I was able to just slide them off with virtually no effort) and the main fuel hose rotates quite happily on its stub...so I reckon that could do with being a bit tighter. Hoping sorting the PCV terminations out might help keep slightly more of the oil inside the engine...

Stuck some Osram Nightbreaker lamps in the headlights while I was there yesterday which look masses brighter, not actually driven with them yet though. Got everything I need to do the relay mod rattling around in boxes here, just need to get around to it. Can't believe how tiny the wires to the lights are in this car!
Top

A glow plug does not affect how the engine runs. it makes the engine start easier when cold and run smoother the first minute, but out on the road it is doing nothing.
I suppose you already knew that though

I do, which is why I'm somewhat puzzled by it!

My guess is that it was subtle changes due to the carbon buildup on the tips causing hot spots and affecting the overall burn pattern. Either that or it was something else I disturbed while doing it...either way the car feels like it's running a lot better.
Top

The problem I believe is that the seam sealer around the boot hinges has cracked. Water is then getting inside the pillar, running down the inside of the trim and then ending up underneath the back seat.

The flash has actually made it quite hard to see the cracks in this photo, but you can just about make it out. 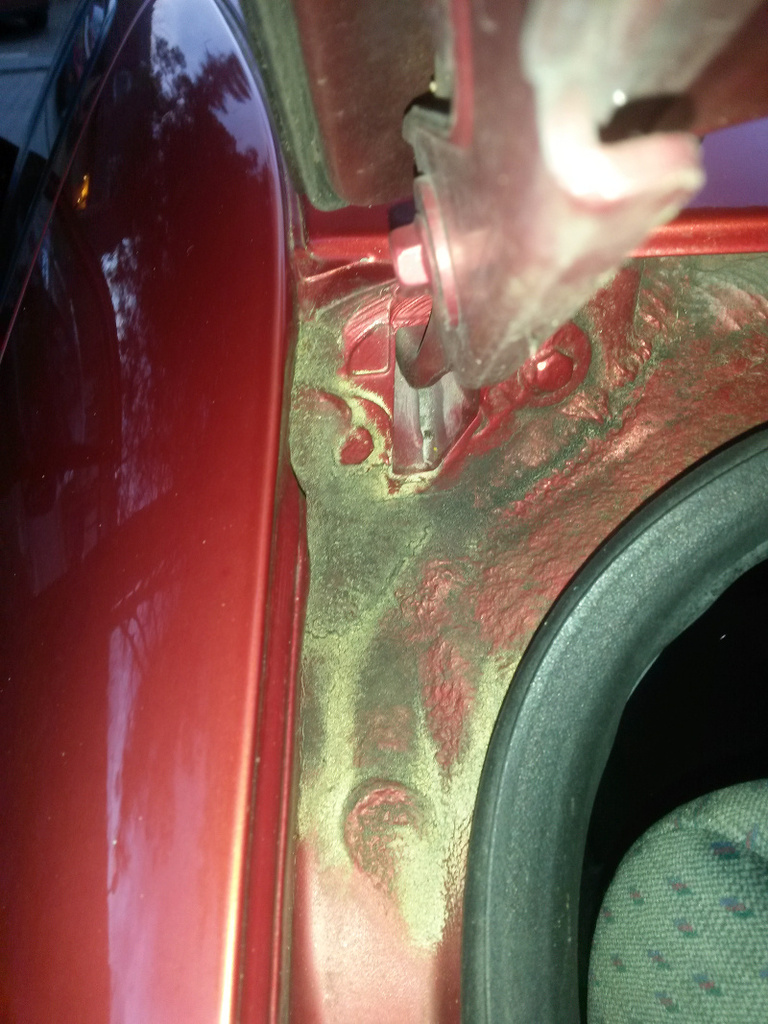 Solution is pretty simple, goop Tigerseal all over the offending area. It's not pretty, but I'll paint over it once it's set so it shouldn't look any worse than the original seal. 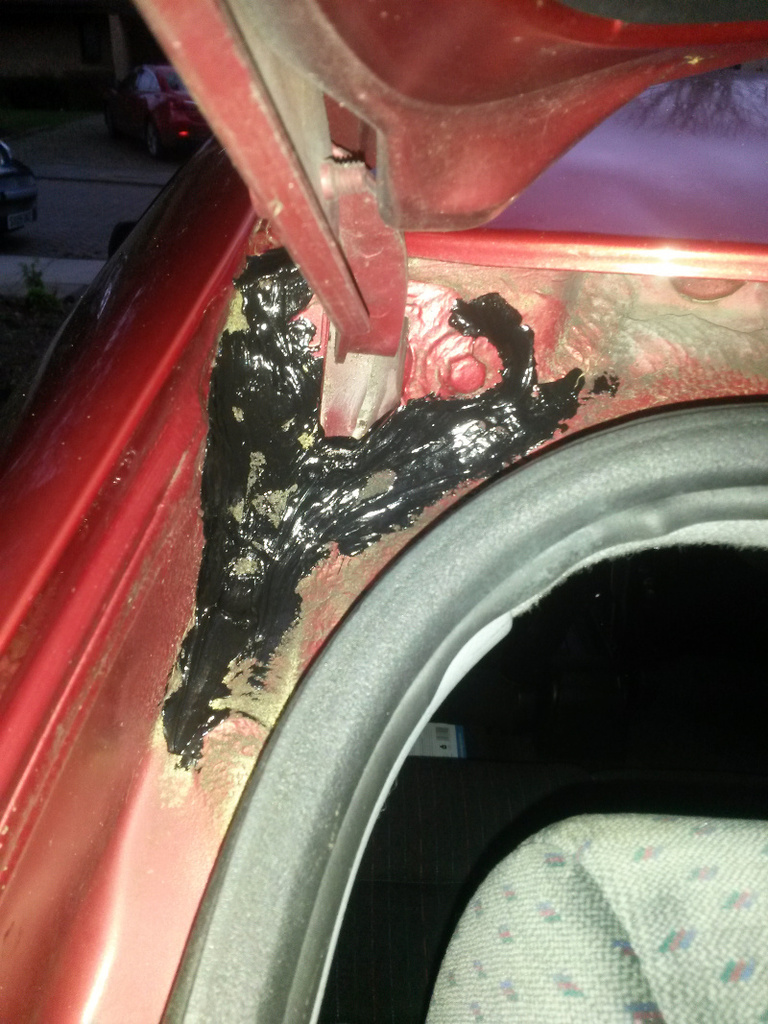 I'll give the thing a good soaking tomorrow and see if any water is still getting in - I'm hoping this will solve it though! I can't see any other way that water could be getting into that area other than that very conspicuous crack.
Top

I have the same problem with my C8 ... water pouring in by the hinges - filling the roof and soaking me when i brake. if i start out with a swift acceleration i'm spared as all the water dumps down the rearmost pillars. . .

I haven't sealed mine yet as i figured it out just this weekend. I wish u luck and cross my fingers that it will work for u and me both ..
Top

Heh, reminds me of one of the more annoying features of a mate's Duple Dominant II coach (Bedford YNT chassis). There's a chrome strip where the flat and slanted parts of the roof trim join. On a wet cold day condensation forms on that strip, which then drips into your lap every time you brake.

Doesn't half get irritating after a couple of hours! Not sure which was worst...getting dripped on or dealing with the gearbox...

...The solution we came up with after a while was to stick a bit of masking tape on the strip a couple of feet back so the drip fell off before it ran far enough forward to land on the driver. Bit of a bodge but it works.
Top

Water is still getting in. Will have another shot at sealing it tomorrow, as I've noted that there is another seam hidden under the seal which is also a possible suspect.

Left the headlights on in the Xantia for 20 minutes or so this afternoon and that was enough to totally flatten the battery. Think I'm going to have to just admit that I need a new battery at this point as that shouldn't have rendered it flat enough that the dash lights were barely glowing...

Have stuck it on the conditioning cycle on the charger and will see if that helps at all, but not really that hopeful.
Top

Have you checked your roofrack fixing holes Zel?

Thought of you this afternoon, spotted a nice Saab 96 in town...
Top

Red one, Jim? If so I've spotted that around this area a few times.

Roof rack fixing holes have been checked and all still have their covers on. Possibly not for all that much longer as I may well be picking up a roof rack before we make the run to Center Parcs later in the year - basically to stick the Sinclair C5 on rather than it taking up the entire back of the car (given that I'm the one with a tow bar I'll be designated cycle carrier anyway!).
Top

Zelandeth wrote:Red one, Jim? If so I've spotted that around this area a few times.

That's the one Zel, in a rather fetching shade of brick red

I did not catch any other details of it but it sounded lovely with want to me sounded like a vee burble so I'm assuming it has the V4 engine..

Which Center Parcs are you going to? I've had some great holidays at most of the UK ones over the years...
Top

Yeah, the 96 from that era would have the V4. The earlier models sounded rather interesting as well with a three cylinder two stroke under the bonnet.

We'll be going to the Sherwood Forest one this time. We've been there, to the new one just down the road here and to another one that I can't remember the name of right now. The Sherwood one we've all agreed gave us the best experience overall.

Had the battery tested today and it got a clean bill of health, so will just make sure it's given the chance to take a good charge. Must have just been dragged down when the glow plugs were on the way out.

Also finished the work on the C5's indicators as the flasher unit arrived this morning so they actually work properly now.
Top

Nothing car related today, though I had actually *planned* to do a few things today until life intervened. It's kinda an oddball event though so will relay anyway.

Early afternoon approaches, and suddenly there's a deafening bang followed by a crash from downstairs. After a bit of head scratching and peeling the dog off the ceiling, we figured out what had happened.

Apparently, for no reason other than that it thought it was a good idea, the middle shelf in our TV stand had, the only word I can come up with for it, detonated. It is (well, was) tempered glass and has gone pop. 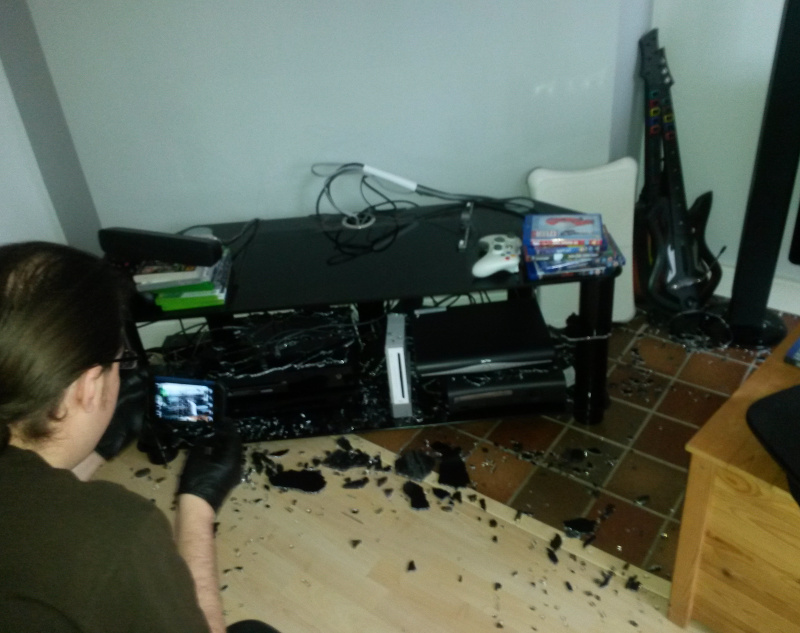 That's about 50% of the way through the cleanup operation! The blast radius is a good 15 feet or so, and I reckon despite my best efforts we are going to be finding bits of glass for months. Obviously having a dog around I'm being thorough with this. Obviously in that photo the TV and game consoles that were on the top shelf have already been evacuated in blind panic!

We're rather glad though that it was that shelf not the top one that decided to do this, otherwise instead of needing a new TV stand, we'd probably be looking at a replacement 50" TV, not to mention whatever out of the couple of grand's worth of game consoles underneath took exception to having that much weight land on them!

Nothing fell on it, there were no scratches or anything, and there wasn't even anyone in the room when it happened...just a manufacturing defect in the glass eventually taking exception to life as best as we can tell.

Made a right old mess is all I can say!

You will not be surprised to hear that the replacement that we picked up from Ikea contains absolutely no tempered glass.
Top
Messages: 5261