Well nearly there today, reckon the belt I have is a fraction too short as I can't *quite* get it over the last pulley. Grr.

Ah well, switch it tomorrow for a longer one and then we should be good. I knew there was going to be some trial and error involved here. Then will get the A/C degassed and see about pulling the compressor out and take a look at it on the bench (well...atrium floor anyway...) and decide whether to refurb or replace it.

A 1/4" to 1/2" adapter in the tensioner makes my 1/2" driver handle (with the handle from my trolley jack on the end as a breaker bar) is a perfect fit for releasing the spring tensioner.
Top


Zelandeth wrote: A 1/4" to 1/2" adapter in the tensioner makes my 1/2" driver handle (with the handle from my trolley jack on the end as a breaker bar) is a perfect fit for releasing the spring tensioner.

That's an excellent tip.. I once made a special tool for the job but that's a lot easier and quicker...

Hopefully the A/C compressor can live again... If it's gassed up then it will but to change the bearing you don't need to remove it... It can be done in-situ with the proper puller...

You can borrow my lathe to make one if you fancy...
Top

I need to have a look around for the bits to sort the bearing, see how much it comes to - and as you say would need a puller. Been forever since I used a lathe, probably was still in secondary school! Wonder if I can even remember anything...

Didn't get a chance to do anything with the cars today as I was otherwise engaged picking up Abby's new wheels to get to/from work, well part of the journey anyway. It's a Gazelle branded E-bike (can't remember which model off the top of my head), but will be cycling to the station from here, then on the X5 coach to Oxford, and then cycling from there to work. Means the 107 is finally free from that torture!

Really nicely made seeming bit of kit, weighty obviously but you don't really notice that when you're on it. Even though I did feel like I was cycling on a double decker bus when I took it for a spin, being used to the Sinclair! Did luckily remember to put my feet down when I stopped too...

Tomorrow, back to getting the Xantia mobile again, and then hopefully give the Saab some TLC so it's running in tip top condition again. Definitely seems a little down on power just now, hoping that an ignition system service, new fuel filter and a good clean of the throttle valve and the injection system air metering flap will restore normality. In fairness, aside from regular oil/filter changes it's been barely touched mechanically in the last couple of years...it used to get far more spoiled than this!
Top

I can now confirm that the belt size you need to bypass the A/C compressor *with* the eccentric tensioner still in place is a 6PK1152, so 1152mm in length (£11 from GSF who have been very patient with my switching and swapping belts!).

Battery is a bit low from sitting for a while and some short runs beforehand, so will leave the charger on tonight.

She burst into life though (blanketing a significant portion of Bradwell Common in grey fog in the process...I really need to change those glow plugs!) and is now devoid of any rattly, whiney noises - confirming that as the cause of them all. Car seems creepily quiet now in fact...

At least it's mobile again now, can look into a permanent fix in due course.
Top

good to hear the belt is on Zel...

E-Bike is interesting.. A good way of commuting that's for sure... Just the job for a run around MK. What's the battery life like and what's its top speed?
Top

Battery life has yet to be determined, brochure claims something like 90km though depending on terrain. Assist runs up to 15mph as is the legal limit, though obviously how fast it can actually go depends on how fast you pedal beyond that.
Top

15mph is a nice cruising speed on a bike Zel...

It doesn't recharge the battery whilst pedalling or going downhill I take it?
Top

Don't think it's quite so clever as to do regenerative braking, nice idea though!

Been pretty quiet on the car front over the last few days, I've got the bits here to give the Saab a service - but most of my tools are buried in the garage behind half the stuff I had to bring down from up north at zero notice and I haven't summoned the courage to disturb that van sized game of Jenga yet...

Had a bit of a poke around the organ this afternoon though, figured out that the lid is actually only held on by two screws and a couple of clips. Think I've worked out how to get into clean the contacts on the drawbars now - actually from the front (the surround around the tabs, drawbars and the manuals comes off) rather than the back as I originally thought. See if I find time to actually sort that out tomorrow, as that's the only thing not working perfectly on it now. 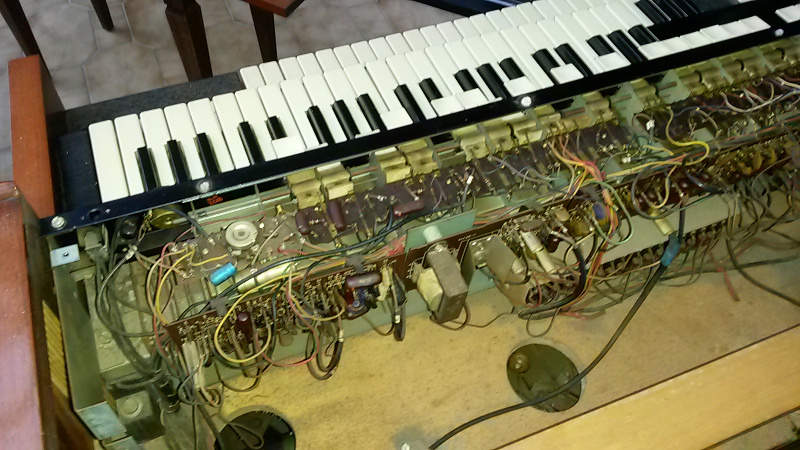 While all the connections between the tone generator and the rest of the organ aren't hard wired - they're socketed on individual pins so separating that is going to involve having to disconnect a squillion wires and hope they go back in the right places...Hmm...would rather avoid that if I can! However I still don't rate out chances of getting 135kg of organ up the (spiral!) staircase with it and us in one piece!
Top

You could always try and properly do what they did in the old silent comedy films; long rope and pulley, and winch it up the outside of the building (provided a windows opens far enough)!
Top

I've half considered up and over the handrail to the balcony with a block and tackle, can't find anything solid enough to anchor it to though...

The external windows are all pretty small so that would be a none starter.

It's annoying that the tone generator connections pass through a hole in the shelf as otherwise it would probably be possible to remove most of the guts of it as one assembly just having to disconnect a few power and speaker connections. The tone generator weighs upwards of 50kg apparently, and looking at it the manuals must be 20-30kg...so if I could separate them it would simply be heavy and awkward rather than dangerously heavy and awkward.

Still don't know why in my head this thing was lighter than the last one I helped move!

Could be worse though, it could be one of the theatre organs that used to accompany the silent movies, or some of the early electronic church organs, was following a thread on another forum where a 50s Miller church organ was being moved, the tone generator on that thing was about the size of a telephone box and they reckoned it weighed around half a ton...wouldn't want that dropped on my toes...
Top

Get one of these:

You can easily get that upstairs

Looks like it's doomed to live downstairs Zel!
Top

Attempted to seal the water ingress problem on the Xantia for the second time, time will tell if I was successful.

Finally had the opportunity to fit a couple of accessories on Abby's new bike (trip computer and water bottle holder), and attack a couple of areas with cable ties in the interests of tidiness and things not getting snagged in daily use. Had to resort to cable ties and a bit of non-slip rubber mat for mounting the bottle holder as there are no mounting holes provided...Probably want you to use some official manufacturer part that costs several tens of pounds...I think not. While out for a ride this afternoon the C5 developed an intermittent electrical issue whereby I was losing all electrical power (including the permanent feeds to things like the lights). Given that it affects *everything* should be pretty easy to track down as it can only really be:

I think number three can be discounted as well as I'm pretty sure that the control/ancillary connections come out the socket on a separate wire, so the connector itself is probably the main suspect. It is a moving part, and is 31 years old.

Will give the thing a clean tomorrow then drag it inside to give it the once over...about time I gave it a health checkup anyway really, it's done several hundred miles since I dragged it back into the land of the living (doing the bare minimum really...new chain, lubrication of various bearings, new tyres, one new (secondhand) relay and a diode robbed from a spare control box), without any problems save for briefly developing a mind of its own when the control box got wet a few weeks back, which was easily sorted with some WD40 and a better seal.
Top

That bike looks not unlike a "Boris Bike"..

One was found in a competition very recently...