It's always amazing and entertaining just how much smoke can be generated by a good Italian Tune-Up!!
Top

Well, deliberately gave it the beans around town (not hard in MK with all the roundabouts and 70mph dual carriageways!) for a few days and smoke levels even of full throttle are now near zero...astonishing the difference, and I thought it wasn't bad before!

Definitely need to get the spheres done soon though, rears are really rather sad, especially the offside one. Not sure how much life is left in the fronts, so will probably just do the lot. Accumulator seems okay though as the pump is only clicking every 30-40 seconds.

...need to pick me up a set of ramps first though, and can finally stop putting off tweaking the ride height which is a bit high and has been since I got the car.

Full year I've had the Xantia now, bit more than the few months I was thinking of when I was planning the pirchase.
Top

Zel, you're very welcome to pop your spheres on my sphere tester and see how good/bad they are...
Top

Thanks Jim. Front ones it may be worth checking (they were working secondhand fitted about this time last year), rears though I am pretty sure are shot hough. Time to start introducting them to my friend Plusgas I think...
Top

When you get around to changing the spheres AEP Direct gave me good service, prices, and rapid turn around. They will want the vehicle reg when you place the order, so that they can check you have ordered the correct spheres for your car.
Top

Yep. planning on using them I think. Hopefully they won't have the same problem that a lot of parts places do with my reg - many seem to return that it's a Saxo rather than a Xantia for some reason!
Top

OK, good luck with that. A trick I got into doing was to loosen off the spheres every 6 months or so (not much, just enough so you could turn them by hand), and then do them back up hand tight. It made it a LOT easier when the time came to replace them.
Top

That's a good tip that is. Worth tacking onto the usual oil change and general inspection procedure for the sake of a few minutes work. May as well check and grease the rear height corrector while under there too...

Looks as though she might have a bit of an epic road trip coming up in March, so will be attacking the to do list in the near future I think.
Top

Not been a huge amount going on lately.

Gave the Saab a bit of a run today as it was dry, and once again had that moment of realisation of "Hey, this thing is actually quicker than I thought" as I seem to every time I haven't driven it in a while, and I always forget what a lovely noise the exhaust makes.

Yesterday finally got around to getting the Xantia's wheels balanced in an effort to eliminate a really annoying vibration at exactly 70mph. Turned out that they were all pretty close, only one of the rears was out by 10g, but it was apparently enough as the vibration has now completely gone.

Was meant to be giving the Xantia's interior a clean this afternoon but got sidetracked by a new bit of tech, having managed to score one of the little Bose Wave CD/Radio things for the grand total of thirty quid. I've been wanting to get hold of one for ages, not least because the engineer in me wants to take it to bits and examine the audio witchcraft involved, but refused to pay £70 odd for even a broken one which they seem to go for on eBay.

I do have to confess to the fact that it actually sounds not half bad either...Not enough that I'd have paid £500 odd new, but for £30, it'll do quite nicely for my computer's speakers I think...
Top

I've got a bluetooth speaker called a Juicebar... Remarkably tiny but sounds very much bigger!
Top

Could happily bring it over for you to have a nosey at one of the days Jim, it's a tiny little bit of kit for what it does and is definitely portable. They might have missed a trick there actually, could easily have adapted this to be easily carried I would think. The ability of it to fill a room really is quite astonishing for the size, that I will definitely give it. Happily goes well louder than I generally listen to music without distorting as well, which for something using a pair of 2" drivers is kinda impressive I think! 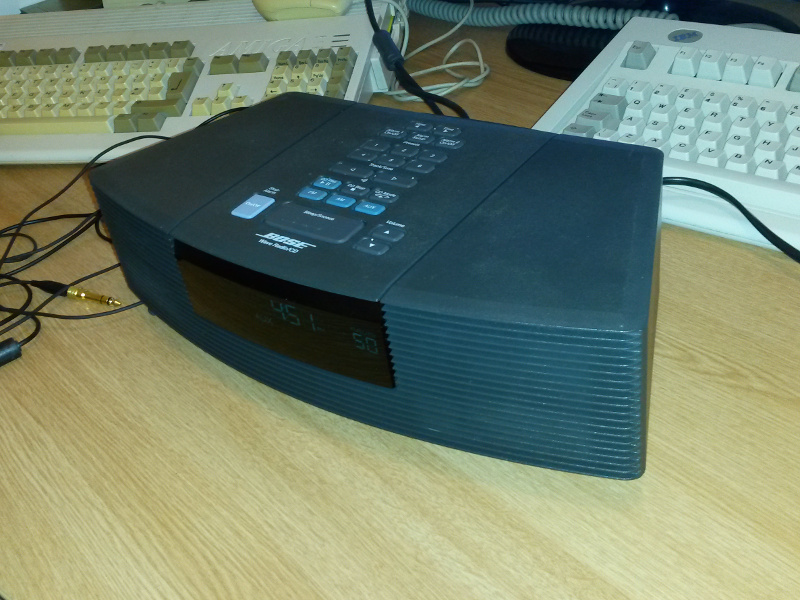 Says a lot I think when you're looking at expensive audio gear which makes a point of *not* having a million controls that you can mess with.

The "if it's heavy then it's expensive" rule does seem to apply here - for the size of it the thing weighs a ton!
Top

When my cousin Bob was speccing out his Audi TT 3.2 RS he chose Bose speakers. I have heard them, and they are louder than his car, but the sound quality is very good. If they made your ears bleed you would know what notes did it!
Top

Bose do make some cracking kit, but you'd expect it for the price...I just can't help feel that even if I could afford it that I'd probably still end up with something else. They're good...but are they really worth that much more? Not convinced.

Having had this thing on most of the evening now I do admit that it blows anything else that size out of the water for clarity and generally managing to sound like it's coming from a unit ten times its size. You don't really notice it - you just hear the music, which I reckon is always a good thing for a speaker system.
Top

Helping my father move house at the moment (which has turned into a right old saga of course), and today's main large item to move was his car. After a two hour phone debacle with Motability to get me on the insurance.

Hate the giant touch screen, the steering wheel is too thick and rear visibility is a joke. Tell you one thing though, and that's that it doesn't half shift. His previous car was a virtually identical 208, but the 1.4 version (until it got written off by a van driving into the side of it). I really hadn't expected such a vast difference between the two. The 1.4 was perfectly reasonable, but the 1.6 feels really properly rapid for a little hatchback. Could encourage you to be a bit of a hooligan that car could.
Top
Messages: 5147