Just had a look and the code stamped on the offside rear of the engine bay is KJAD. 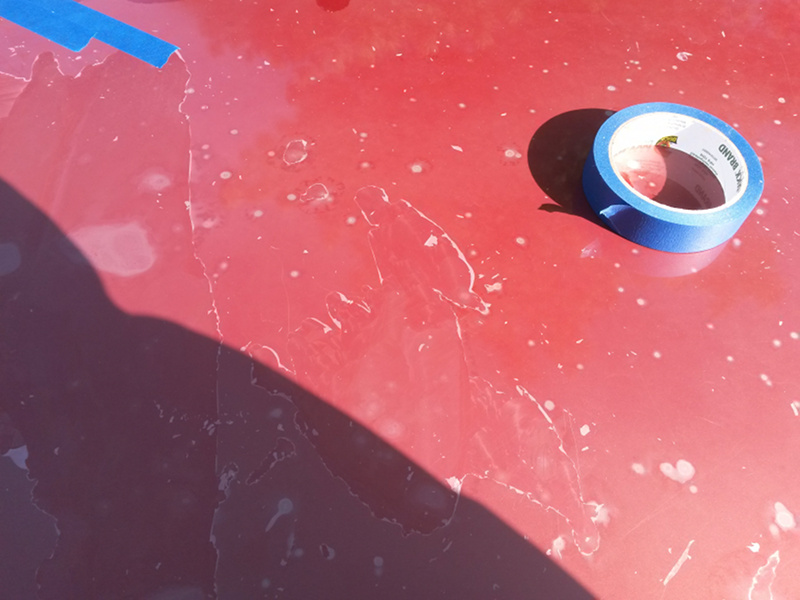 My plan is basically to remove as much of the flaking, pitted and bubbled clearcoat as possible, then to slap some fresh laquer over it. It will never be anything close to perfect, but will be a heck of a lot better than it is just now. I don't mind the car wearing some battle scars for its miles, so long as it's at least obvious that some effort has been made to take care of the injuries.

The masking tape idea seems to work pretty well actually to strip off the loose stuff. Going to drop by somewhere later and get some wider tape so it's not quite as tedious! 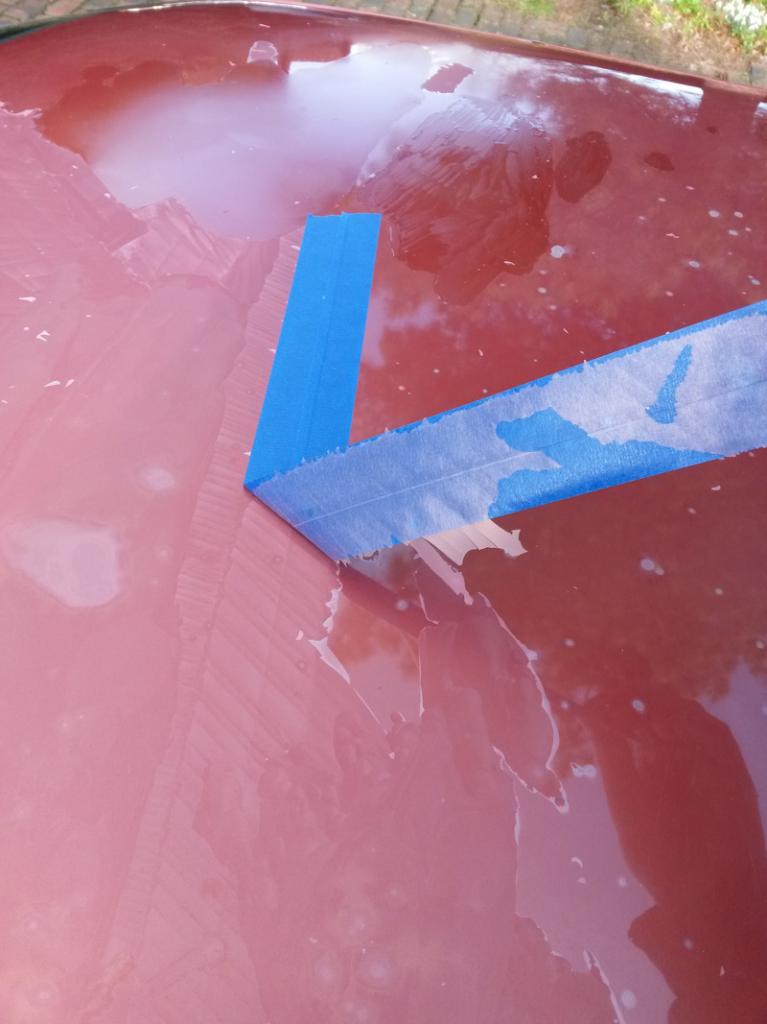 It's really rather satisfying it has to be said as well.

...Plus unlike picking it off you don't end up with a zillion bits of laquer pinging off and sticking to everything.
Top

My Activa peeled terribly and last year I had a partial respray...

I'll be interested to see if a spray of clear lacquer over the cleared base improves matters...
Top

may be it will be possible to apply a clear etch coat rather than rubbing to old base coat down???????
Top

No idea to be honest! This isn't being done in a terribly technical way, more just a "Okay, I've got this, this, this and this laying around, let's give it a shot and see what happens."

The very worst that can happen really is that it peels off again, in which case I'm back where I am now.

I did patch up a couple of the smaller trouble areas by hand shortly after I got the car and they still seem to be firmly affixed.
Top

That's pretty much the plan. Clean it as best as possible, mask off everything around it and then spray it.

It's never going to be anything like perfect and I fully accept that, but anything pretty much would be better than the state it's in now. Reckon I'll be more likely to get an even looking finish spraying it than brushing.

Wondering given that it's relatively easily detached if it might be half way reasonable to consider approaching a bodyshop to see whether the bonnet could just be resprayed properly at a sensible cost.
Top

It might be an easier job to just flat the basecoat down and spray it with Celly. Then polish it up without lac.
Need to check what you are putting on is ok with the red basecoat. Other wise you would need bar coat. The basecoat on a BX will be 2k?
You might be able to flat the red basecoat a little, the lac it? Try a bit somewhere inside boat maybe.
As Malc says, the clear lac is normally put on just as the base is flashing off. If you leave till you are outside "window" you must sand, but that may change colour slightly. Like I say , try a bit or ask pro painter about that.
Top

Can somebody please point me towards somebody selling the correct aux belt tensioner? I seem to be going around in circles at the moment, especially with the amount of sellers who don't have photos of the unit, part numbers (what *is* the part number?) or whose lists keep telling me it's the non-spring loaded one...

I've sort of reached that point where my patience with the internet has run out there, and I find myself very much missing the days where I used to have a little local motor factor who I could walk into and pick things like this up at decent prices knowing at least 95% for certain that I would be getting the right part. Even if they did occasionally want to run screaming when they saw me walk through the door given my somewhat odd choice of vehicles sometimes.
Top

Post up the VIN, and we can check. There are only 2 sorts though - the early type which is is a small self contained unit, and the later type which has a larger exposed coil spring (and is rubbish!!). The difference is obvious to look at, but yours may be equipped with either depending on when it was actually made.
Top

Is it visible enough which type it is when in situ or is it well enough buried that it's hard to see?

Have so far been sent two of the earlier type despite the respective sellers listing them as being correct for the vehicle, hence my asking if anyone knew of a place which will actually send the right part. ...if it turns out I do have the older type on there that will be a distinctly annoying moment!
Top

If you can see a big coil spring on it Zel, you have the later one...
Top

service.citroen suggests the later type. Note there is, however, also an eccentric manual tensioner- perhaps this is what you have been sent? Can you post a pic?
Top

At least that ties in with what I was expecting. Just had a peer down the side of the engine and can't immediately *see* a whacking great coil spring (we're shortly heading out to dinner and I was just playing automotive Tetris to get the 107 out so didn't have much time to check), though given how limited access to that end of the engine is that doesn't necessarily mean anything. 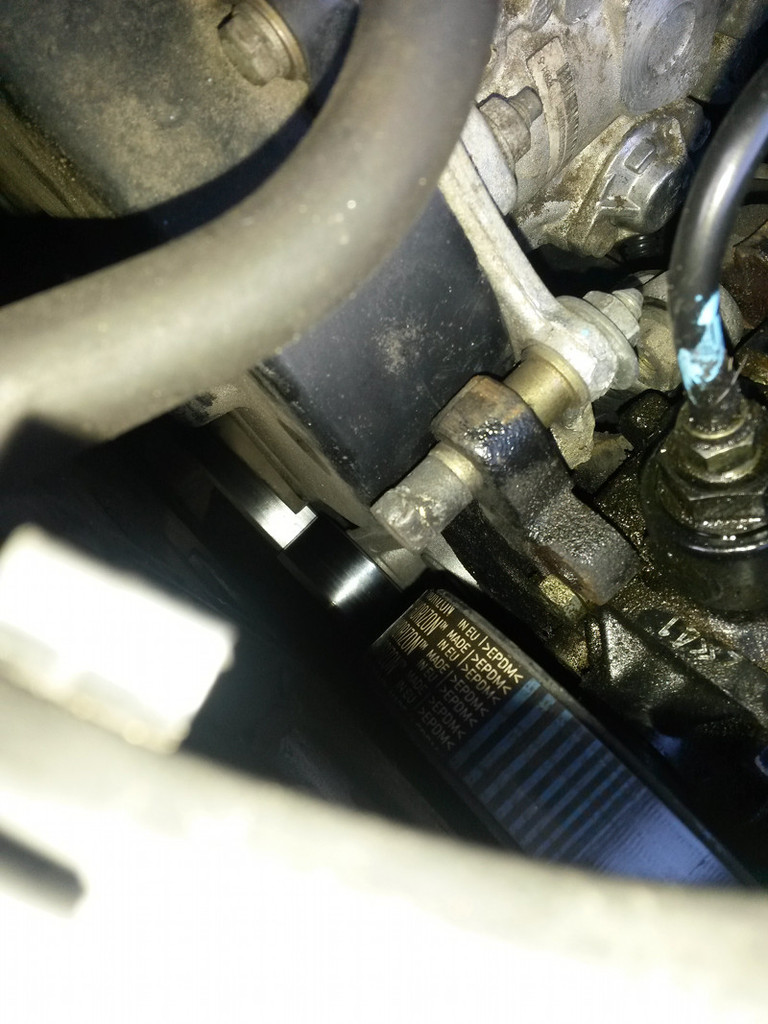 This is the one which appears to be making the characteristic dry bearing drone/whine and looking at it looks as though the belt is running slightly off centre on it. Not sure if this is the tensioner though or whether that's the other pulley buried down in between the hydraulic pump and air con compressor? If I'm taking things apart anyway I fully intend to change all of them to save hassle in the future.

Sorry to sound like a complete rookie, I'll learn eventually! Just a few more bits in this engine bay than I'm generally used to, and the belt routing seems fiendishly complicated compared to what I usually have to deal with.

I don't have photos of the presumed incorrect parts as they've since been returned I'm afraid.
Top

...was afraid someone would say that!

Oh well, I'll take a closer look tomorrow and try to get a better look at it to confirm if I can do that without X-ray vision.

Guess I need to add the idler (?) down by the alternator to my shopping list given I never even spotted it until today. Oops. Fingers crossed there aren't different versions of that...
Top

i can see the top end/mounting of the big spring in your picy Zel,just the other side of the hydraulic pipe with the white splodg on it, if you look down the back of the hydraulic pump and under the fuel pump you will see the spring
Top
Messages: 5148