Definitely one of those moments which gives you an abrupt insight into the laws of conservation of angular momentum and alerts you to how much kinetic energy is actually involved in spinning that little plastic disk at a couple of tens of thousand rpm.

One of the creators behind one of the YouTube channels I follow once described such occurrences as incidents of "real life physics engine malfunctions" which I think fitted quite well.

I still confess to being somewhat curious as to how many more walls my DVD would have bounced off if it hadn't been captured by the bookcase.

The disc in my case actually survived without either shattering or getting scratched by some miracle as well.

How the heck did a disc get out of a disc duplicator? At least my escaping DVD had the good excuse of my own dodgy bodgery being to blame...
Top

I was sitting behind it Zel, I was only alerted to the incident by the screams of the operator....
Top

CitroJim wrote:I was sitting behind it Zel, I was only alerted to the incident by the screams of the operator....

I hope that these were screams of fear, and not of pain.
Top

Fear yes, thank goodness. Those that saw the incident felt the force could have decapitated her..
Top

My Grandad was night foreman at the Cellophane plant in Barrow in the 70's. They had a steam turbine generator on site - it had been running at full chat for a god while, when the power side tripped and unloaded the turbine. The governor stepped in, but since the control valves had been wide open for a good while, they failed to shut.... The overspeed rate of an unloaded turbine is something like 25% per second (turbine trip systems are supposed to operate within 200ms), so the first thing to give way was the main gear wheel in the gearbox - this exited the casing, and then the building, ending up in the field next door, taking all the site phone lines with it, so they had to leg it to the gate house to phone the on-call manager and give him the good news!
Top

That must have been some fair old spectacle... I can almost picture it...

How long before the factory was back to normal?
Top

Yesterday and today I've finally been able to give the poor old Saab some attention.

Oil and filter changed without incident (or any spillage thankfully), the filter on the 900 is in such a location that if it decides to come off it's dead easy - if it wants to put up a fight however it's a real pig as really difficult to get a strap wrench or anything on and turn. 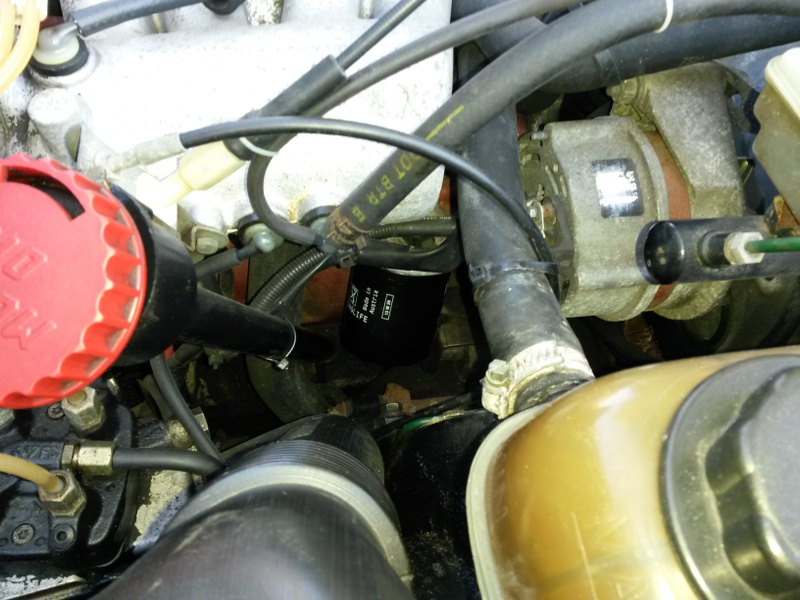 Getting your hand onto it isn't difficult, but tools are always harder.

Have also started shifting the tree sap off it, which after trying everything I can think of, have had to revert back to a pretty aggressive cutting compound as nothing else I've tried has even touched it, even after trying to soak it in hot water for hours. Not the approach I wanted to use, but I'm at a loss as to any other way to get rid of it. Have got 90% or so of it off the bonnet now, roof is next on the list.

After taking it out for a test run after doing the oil, just as I turned back into the driveway I hear an almighty *ping* and I found myself sitting an inch or two lower - it appears that one of the supports in the driver's seat has collapsed. Will investigate that further soon...
Top

Gosh, that oil filter is really in a fun place Zel...

Has nobody created a special tool for shifting recalcitrant ones? Something along the lines of a Pleiades sphere tool?

Hope it's nothing serious in the seat that's gone...
Top

It's easier on the 16 valve cars as the air intake "snorkel" is in a different place (I think the inlet manifold is shorter as well so gets in the way less too). Being honest it's really not too bad provided the filter is co-operative. You can just about get a strap wrench onto it (taking up the slack in that is usually the hard bit - careful not to short out the terminals on the back of the alternator...that's a good way to wake yourself up...), so no specials really necessary. Only ever had one I couldn't shift with a bit of a faff, and that was when I just said sod it and punched a screw driver through it. Made a mess, but problem solved. Sadly you can't really do that with spheres!

Worst car I ever had for oil filters was my L plate Corsa 1.5TD. It's buried right down the back of the engine directly under the coolant header tank. No access from underneath because the subframe is in the way. So you have to remove the header tank and basically stand on your head while doing it. Of course it's a horizontal filter as well so you inevitability end up with oil everywhere too. Would the one on my car come off? Of course not. Took me about an hour of swearing at it, and I very seriously considered taking the bonnet off to improve access - especially after the second or third time I knocked the stay out and had it clock me on the head.

Could be worse though...you could be trying to change the thermostat on a Rover KV6 engine...
Top

Zelandeth wrote: Could be worse though...you could be trying to change the thermostat on a Rover KV6 engine...

Or even the thermostat on a Citroen ES9 V6... It is a right 'mare of a job

Oil filter on a 2.0TCT engine can be a pain, especially when fitted to an XM. Not quite so bad in a Xantia Activa but bad enough..
Top

Ah, same thing as the Rover, buried in the V of the engine with every conceivable ancillary component on top of it?

Seem to recall I said some rather unpleasant things about the hydraulic pump on my Xantia when I did the filter on that too...granted, it was well stuck in place so normally wouldn't be too bad I think.
Top

Hydraulic pump on the V6 is a bit of fun too Zel!
Top

Okay, it's taken me at least four or five afternoons of wrist-cramping scrubbing, but the Saab is *finally* clear of tree-sap. There will always be slight blemishes where it's been, but I'll just have to deal with that. At least it's not obvious unless you're really looking at them. Will definitely be getting a cover for the car soon so I don't have this game again next summer. 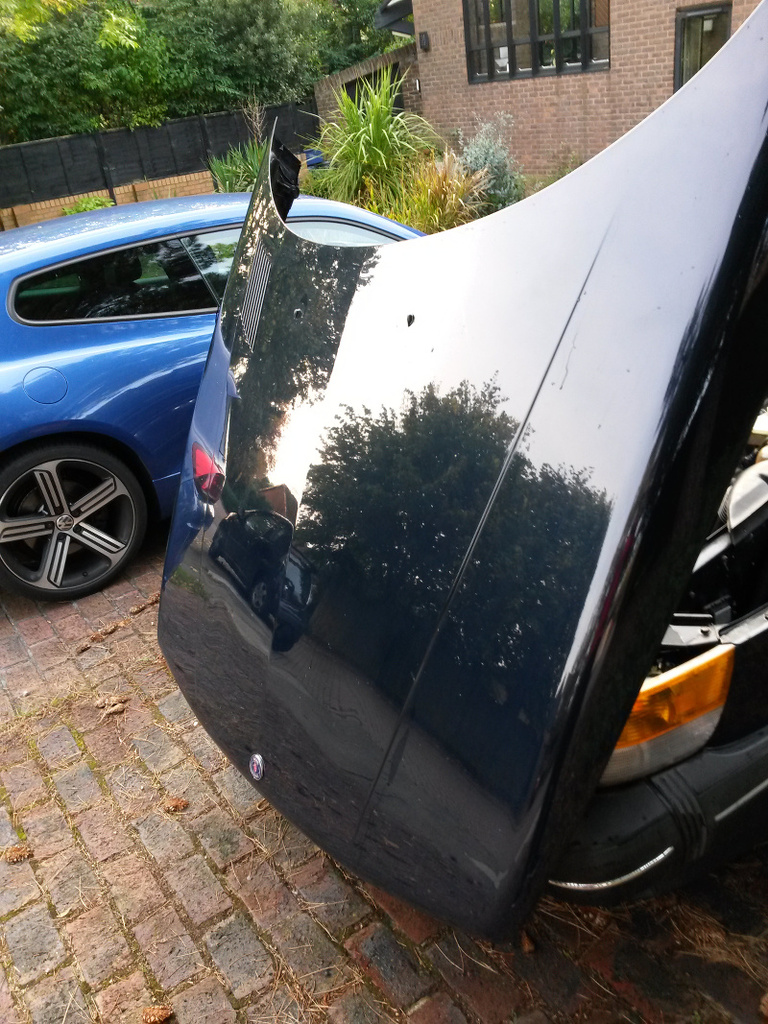 So that's where we are now. Has been washed down and clay-mitted. Will give a skim of polish then as many coats of wax as I can fit in through the day tomorrow, hopefully give the plastics a skim over as well.

Also discovered a tube of metal polish randomly in the box, so decided to poke the cam cover with it, as it's oxidised quite heavily while the car was out of use. Looks like it will scrub up not too bad really. 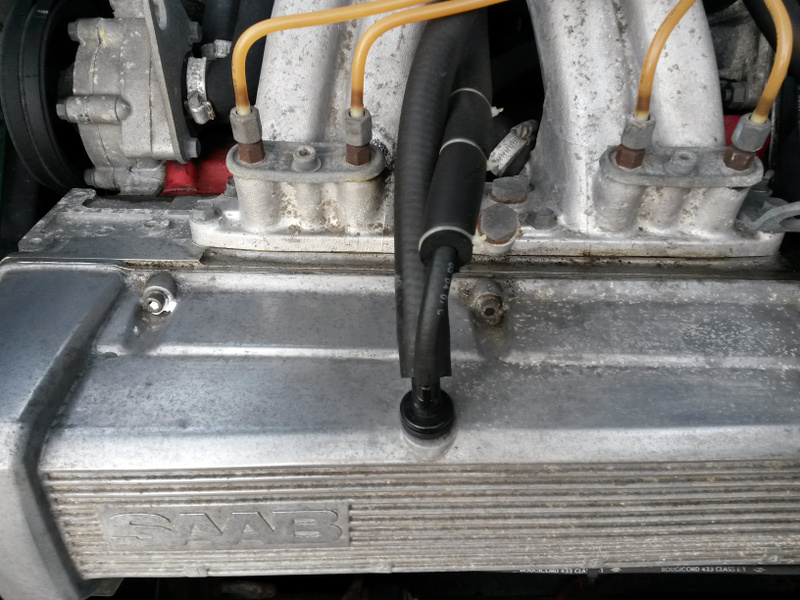 Won't do anything about all the oil leaks mind you...but I do have a new crankshaft oil seal in the glove box which I'll hopefully get done soon (though I think that has actually stopped leaking since the oil change!), and keep promising to get a new seal for the cam cover ordered...will be getting some stuff from Parts for Saabs to service the ignition system shortly, so might include that then...I reckon that's where at least 80% of the oil leakage comes from...
Top

Had a ten second window to have a look at the seat on the Saab this evening before heading out to the shops. 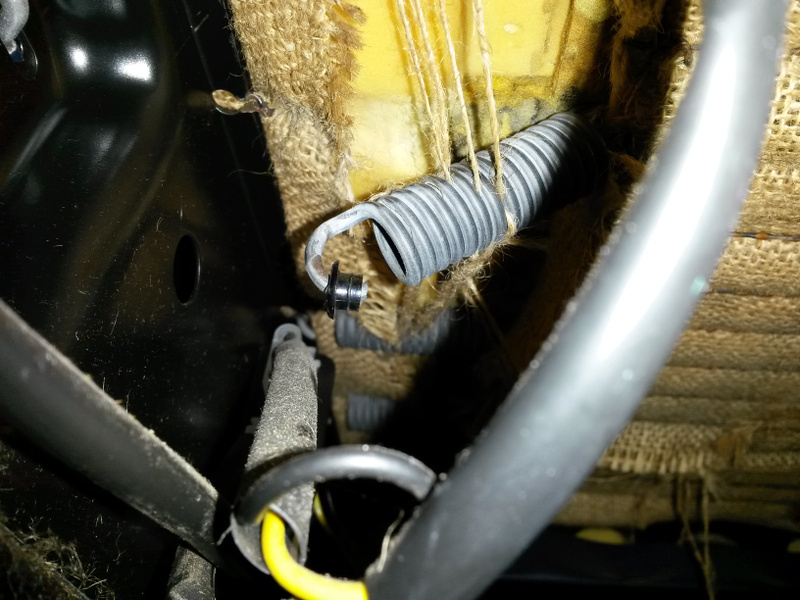 Easy enough fix though. Will drill another couple of holes and bolt a plate on there to re-attach the spring to, problem sorted.
Top
Messages: 5233