Well nobody I've contacted ragarding welding has bothered to get back to me, so will give the garage a shout tomorrow and just book it in for them to do. Will make sure the interior trim is off and that the area is cleaned back to fresh metal etc before it goes in, which should save a few quid.

...especially given that the Skoda decided to overheat somewhat this afternoon for some reason...so need to look into that shortly, but it may well be that the somewhat dodgy head gasket has finally decided that it's had enough - which is entirely justified given how long I've been putting off changing it! Well timed if so as the Saab should be back on the road shortly so it will make pulling that to bits easier.
Top

Saab now has a year's test once more.

The welding repair actually turned into a moderately complicated bit of reconstructive surgery due to the location, requiring no less than five separate bits of metal to be used to rebuild the complex shape at the base at the back of the door closure. Still, looks to be a decent job they've done of it, hopefully good for a few years yet. As of the 1st she will be back on the road again.

Skoda is tucked away under the car cover to keep the rain, and crud generated by both the birds and the tree while we get the next few weeks out of the way, then it will have the head pulled off and the necessary repairs undertaken to put paid to the ongoing head gasket leak and to also let me sort the dodgy exhaust downpipe to manifold stud so that I can get that sealed properly.

Most likely will be considering putting that car up for sale once all the problems are sorted and it has a fresh test on (think it runs out in July) as I really need to thin the fleet out a bit sadly due to space limitations as much as anything else.
Top

Result on the MoT Zel

Today saw the 107 get its new A/C condenser and radiator fitted. What a faff that was!

The radiator in the 107 I discovered is not bolted or clipped in in the conventional sense. It has two little plastic pegs at top and bottom. Top ones locate in holes in the slam panel, fair enough. Bottom ones locate in holes in the front crossmember...yes...you have to unbolt the crossmember to remove the radiator. This also means you need to remove the big plastic shock absorber thing which is held in by about 500 screws. Beware the ones holding the crossmember on are made of cheese. Need to go back next weekend and drill two that snapped off out.

Still...is done now, not really difficult - just ten times more time consuming than it really had to be.

Oh...and the bleeding and test run I realised is really unnerving in a car without a temperature gauge.

Hopefully Abby will get home early enough tomorrow that I can get the A/C recharged then in preparation for the silly temps forecast this week!
Top


Hopefully Abby will get home early enough tomorrow that I can get the A/C recharged then in preparation for the silly temps forecast this week!

I'm okay as far as transport climate control is concerned as the system in the Xantia is working perfectly - but Abby commutes between MK and Oxford, so spends a minimum of two hours every day stuck in traffic (often more like four), and like me she doesn't deal with high temperatures well...so the non-functional AC is resulting in me getting a lot of ear bending!

Next on the list will be coolant changes for both the Saab and Xantia, and a routine service for both of the above as they're both due an oil change, Saab will probably get a set of plugs, distributor cap, rotor arm and fuel filter (because I've been putting off doing that for far too long). New set of brushes for the alternator are hopefully on the way to get that working reliably again as well.
Top

Of course no trip out in that car for me seems ever to go without noticing a fault...today's being a nasty hollow clonking noise coming from the nearside front. Initially I thought this was probably going to be a dodgy track rod end (as I could make it do it by rotating the wheel left/right). Actually turned out to be the locknut for the adjustment screw on the track rod wasn't tight. Nipping that up removed all play and stopped the noise. Tracking will obviously need to be checked, so will get that done when the new n/s/f tyre is fitted later in the week (to match the offside one that was changed due to a puncture a couple of months ago).
Top

Finally managed to get hold of the 107 long enough again to get it's new nearside front tyre fitted and to give it a wash. Really wants a good going over with the clay and a proper wax to be honest, but that will have to wait.

Xantia I'm definitely going to either valet or have to get valeted before the end of the week as the weekend is going to be hectic, and I need to get my husband's parents from the airport on Monday...and I'm ashamed to even let them see the poor thing at the moment, never mind travel in it. *mutters something about a part husky canine who has been in peak shedding mode for about the last month*

Have also ascertained that the battery in the Saab is stuffed. Reckon the damage was done months ago when it was over discharged when the alternator packed in. It's generally behaved okay until the last few days, but the cranking ability has dropped way off. When checking the electrolyte level it became obvious that things were far wrong as in five out of the six cells, it's turned the colour of burnt coffee...new one on me!

...anyone got a type 072 battery laying around? Had forgotten how expensive they are!
Top 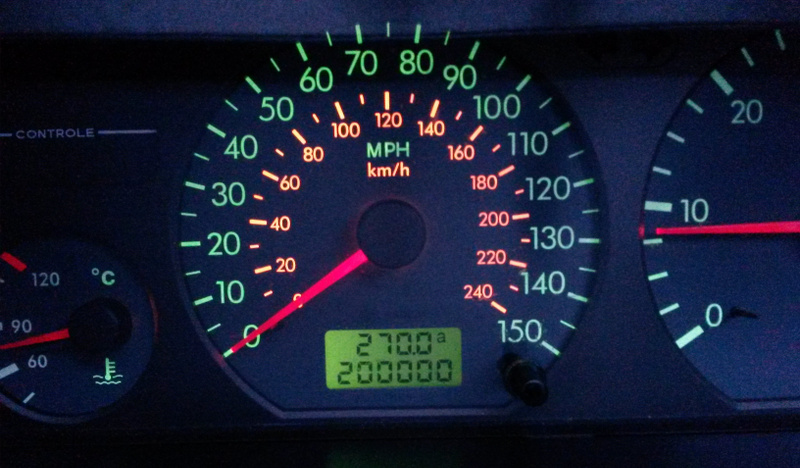 
I'm wondering how long it'll take me to do that in my C1... I reckon I'll be into three figures myself before that happens...
Top

I'm wondering how long it'll take me to do that in my C1... I reckon I'll be into three figures myself before that happens...

You already are, if you calculate your age in cat years (or months!).
Top

I'm wondering how long it'll take me to do that in my C1... I reckon I'll be into three figures myself before that happens...

You already are, if you calculate your age in cat years (or months!).