Zelandeth wrote:Just thinking now, a screaming little three pot two stroke would have been epic in the Ka, given how it handles that would have suited it perfectly!

Worked well in the original SAABS!

Good points well made on both counts! Two stroke triples are lovely engines.. I love them in bikes of the motorised variety, especially my old Suzuki GT550

The only problem the Swedes had with those engines was when they went down twisty hills. As the two stroke engine has the oil in the fuel you had to keep your foot on the throttle in order for it to remain lubricated, and your foot on the brake to make sure you did not go down too fast. When (if!) you DID get to the bottom the brakes were a tad warm and might not work properly.
Top

Hell Razor5543 wrote:The only problem the Swedes had with those engines was when they went down twisty hills. As the two stroke engine has the oil in the fuel you had to keep your foot on the throttle in order for it to remain lubricated, and your foot on the brake to make sure you did not go down too fast. When (if!) you DID get to the bottom the brakes were a tad warm and might not work properly.

That's true James! We had the same issue when racing 100cc karts, a period of closed throttle at the end of a really quick run along the back straight at full-pelt could lead to a seizure due to lack of lube...

Our work-around was to clamp a gloved hand over the carb air intake to richen up the mixture at the end of the straight and thus draw in a big gulp of oil to see the engine through its lean period...

Info on the Ford 2-stroke: 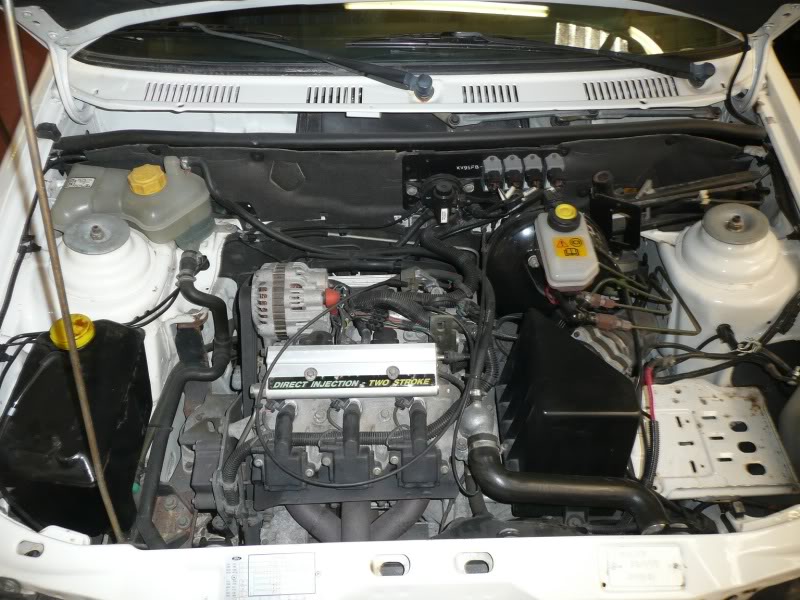 That is really interesting, they'd obviously put a lot of time and effort into that engine...shame it never saw proper production.
Top

Zelandeth wrote:That is really interesting, they'd obviously put a lot of time and effort into that engine...shame it never saw proper production.

Can't really add much to that, except to wonder if it may see further development with further advances in electronics & 2t technology. I actually pondered at one point if its possible to create a 2t cycle engine without total loss lubrication, something along the principles of Detroit diesels where they use poppet valves and a supercharger to create the scavenging effect. With direct injection & a low blow centrifugal (maybe even electric powered) supercharger.

Surely someone must be looking into it, as double the power strokes for a given speed has to have worthwhile gains left to be had?
Top

Richard, thanks for that! An incredibly interesting article on the Ford 2-stroke KA engine

What a shame it never saw the light of day

Dan, 2-strokes have massive advantages but like Wankels, emissions are always the problem with them... Especially these days...
Top

Speaking of 2-stroke emissions, the Napier Deltic as used in the Class 55 Diesel railway locomotive was a 2-stroke diesel and it used to smoke almost as much as the steam locomotives it replaced

A very characterful engine though!
Top

Wow never heard of that before. What a very neat installation as well.

[] Sorted out the battery feed wiring so it now reached properly. It's just got screw terminals for now - because my soldering iron is currently in hiding somewhere - but will be soldered and heatshrinked once I find it. Used a couple of bits of ex Lada wiring loom, so they are pink and brown leads which match the existing palette. Not that you'll see them once they're all loomed up anyway.

[] Attempted to do some sound and vibration damping around the fuel pump to cut down the horrendous racket it makes. It has definitely helped, but it's still noisy. The line is still rigidly fixed to the body in a few places though, so once rubber sleeves have been added there will see if that helps. May also throw some sound deadening in the void in the rear wing where the pump is as it may well be acting as a big resonance chamber.

May just end up getting a new, quieter pump at the end of the day... I'm using this one purely because it was one I happened to have laying around - and it's got 112K miles of wear on.

[] Poked the non-working check engine light. If I'm interpreting the diagrams right, it should provide a ground path for the light (much the same as the oil pressure light in most cars). Basically, it isn't. Not a wiring fault either, as I've probed the pin on the ECU connector - will double check from the pin on the board just in case it's a faulty connector too. My guess though is that the transistor associated with that function though has either died or been killed. It's not a hugely complex board (only double sided) so should be pretty easy to trace out the signal path - and cross my fingers that I find a transistor rather than it vanishing into one of several proprietary Delphi branded ICs.

Will see whether I can track down a second ECU - both to test my theory, and because let's face it, having a spare isn't a bad idea anyway. ... especially when I inevitably start fiddling with the firmware!

Not with a view to fiddle with it, but one of my next tasks will be to make up an interface cable to connect to the ALDL bus (just pre dates ODB2 sadly!), as someone has written software which allows quite extensive monitoring (and I believe logging) of real-time data, which to me just seems like a really useful feature to make use of.

Likewise the CEL, it not working isn't really an issue until next MOT, but given this thing does so much in the way of self diagnosis, it seems stupid not to take advantage of that ability - especially when that can save you from damaging the cat or even the engine.

The CEL itself is currently wedged in the ashtray. Having said that, the wiring loom is cable tied to the dash and passenger seat base just now, and the fuel pump supply is just running under the front seat and over the rear one. ...suffice to say "tidy up the in-car wiring" is high on the list just now!

One other thing I've not 100% decided on is whether to stick the intake horn and warm air intake back on. It's essentially unnecessary given there's no carb to ice up (bearing in mind there are several hundred watts of heater built into the inlet as well). It will be carried and definitely added for shows. Day to day though I'm not sure if the larger inlet diameter is actually more useful...really should test if it makes any odds.

Plus it currently produces some highly entertaining noises - the sort of hard edged bark on a blip of the throttle that you normally would associate with something running a rather tasty big Webber or similar carb...the novelty might wear off eventually...maybe!
Top

Getting the diagnostics working will be a great boon to you in fin-tuning the system Zel - and you'll be able to properly monitor the oxygen sensor too...

The Injection DSs were prone to noisy fuel pumps so you're in good company! Hope you can silence yours as the noise will soon get very annoying... Unless you install a very loud stereo to mask it!
Top

CEL not part of MOT - even if it is lit, it might just warrant an advisory as long as it passes the emissions test.
Top

RichardW wrote:CEL not part of MOT - even if it is lit, it might just warrant an advisory as long as it passes the emissions test.

That's good to know, I was always under the impression it was an instant fail and the reason it was lit (or did not light at ignition on) was immaterial...
Top

RichardW wrote:CEL not part of MOT - even if it is lit, it might just warrant an advisory as long as it passes the emissions test.

They changed that then? It always used to be like the ABS light in that the tester's had a table showing what the correct behaviour at startup was. It failing to do that (usually because the bulb had been removed!) would warrant a fail.
Top

Nothing major here, just a couple of photos to show where we are just now.

Here's the box of "leftovers" that have been taken off the car.

This is the current state of play in the engine bay.

Note that the bundle of red wires by the bulkhead are the "adaptor" to connect the Lambda sensor, and will be banished once the correct sensor is fitted which will instead plug in neatly. Likewise the screw terminal blocks will all disappear in the near future. The ones in the power supply line from the battery are simply because I didn't have my soldering iron handy to solder and heatshrink those connections, and the ones near the fuse box are being a placeholder for the vehicle speed sensor.

Yes, still a few things to do, but it's starting to look like an engine bay again!

In the boot it's not hard to see where the fuel pump lives...The rubber line is the suction feed from the original tank pickup, and the copper line is the HP feed that runs down under the car to the engine bay. Currently these are just going through the access panel in the boot floor, but I'll drill holes through into that void from under the car in due course (there are already a couple as that's where the fuel tank vapour separator and vent hardware lives). That way I won't be left with anything visible inside the car, but the pump will still be both easily accessible to servicing, but still inside the car so protected from the elements.

Finally for now, we have the interior...where I'm currently rocking the "rally car exposed wiring look" until I get around to tidying it up.

I can actually sort this lot out now that I know it works! Made sense to make sure it worked *before* faffing around routing things under the carpets and such. Need to get the nearside carpet out anyway as I need to remove the existing ECU for the old carb system...it's just taking up weight now! I *will* keep hold of it though in case for any reason I do reverse this mod at any time (can't see that happening given the *massive* improve in driveability!), as the AFR modules are pretty hard to get hold of these days - especially given their tendency to fail if you so much as look at them wrong.
Top
Messages: 5233