Good that it's working again, but what a dreadful location for all those relays and connectors (to the right of the fan) - are they normally covered up, or open to the weather?

On the cable length that came with the fan, it could be that that same part no./fan was also fitted to other vehicles, so maybe a different lead length.
Top

There should be a cover on the relay box - mine has and I was for a moment tempted to open it and look inside but decided that the clips would likely break and cause more headaches so took the "If it's not broke, don't fix it" approach.

It was me who mentioned the lead being too short. I re-routed mine in the best bodgy fashion.
Top

There is a cover.
I had it off during fitting the fan, because I needed to re-route the cable slightly and wanted to check overall tension on it from start to finish, as well as give the connectors in the Relay box a quick check over at the same time. All refitted now.
It's annoying that the cover of the Relay box has 4 clips, but the back of the box has only 3 lugs (from new, mine hasn't been broken).
Top

Flipping thing.
Went out to start it today, unlocked normally, dash didn't seem to react quickly when I stuck the key in and straight round to start (as normal) sluggish starter, no sign of firing, centre console display is showing zero'd dates and time

Good job the Mrs C2 was here cause I was in a rush and don't have time to (-expletive removed-) about doing a bsi reset.
Bloody modern cars.
Batteries go flat. It happens. Always has, always will. The things should be designed to be able to cope with it and not need some Bollocks complicated reset procedure that no normal person would ever think up - and no 'normal' (non self maintaining or technically minded) car owner would even comprehend having to do, or be able to do!
Top

And yes... I feel better after my rant

Went to use the car on Sunday to head over to work on and then tow one of my CXs to its new home.
Fully loaded up the boot with tools etc. etc.
Hooked it up, drew it forward just out of the barn and unloaded the second Xantia (currently living temporarily on the trailer) and then plugged in the electrics... Foglights on permanently...

That shouldn't happen.
Tested the others... Nothing

Bloody thing.
I had re-wired the trailer when I got it, so was pretty sure that wasn't at fault. Checked the pin out from the car and it was indeed showing fog lights on permanently, although on the car all seemed to be working normally.
Was fine last time I used it in circa Nov, to pick up the second Xantia.

As I mentioned earlier, the boot was fully loaded

so had to clear some of that crap out and started dismantling the boot lining.

Was presented with typical incompetent dogs breakfast of someone having crudely opened up the car loom, slaved into it in a random place via scotchlocks and run the new cables ridiculously tight 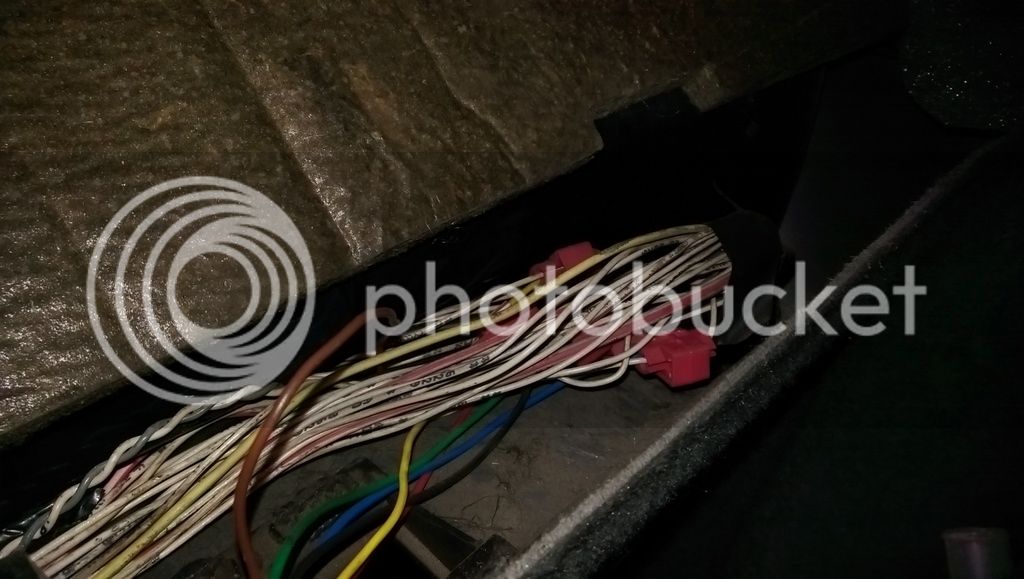 Not only that, but there were wires with scotchlocks fitted but no slaved wire (i.e. no reason to have vandalised it) and (what turned out to be) the brake light wire had about 4 nicks in the insulation where they had fitted one several times over and then moved it (not taped up again after of course!)

Didn't have the C5 manual with me (of course) but using the 'correct' wiring colour ident for trailers, I checked the feed on the original car loom for the fog light and that was working fine.

My mate (not well, but kindly coming over to help me relocate a couple of the CXs) turned up at that point.

More digging uncovered a black box on the end of the slaved in wires; 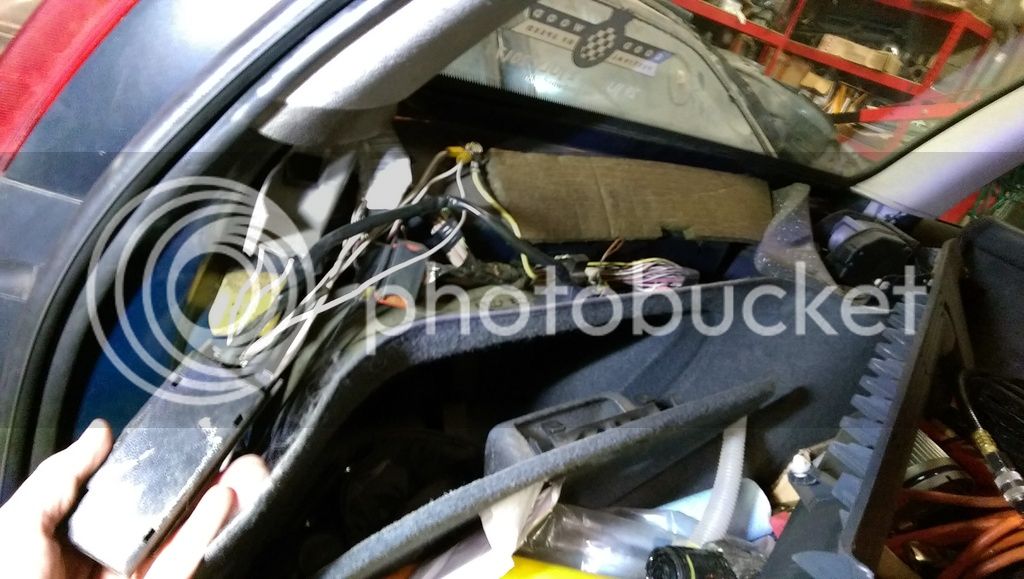 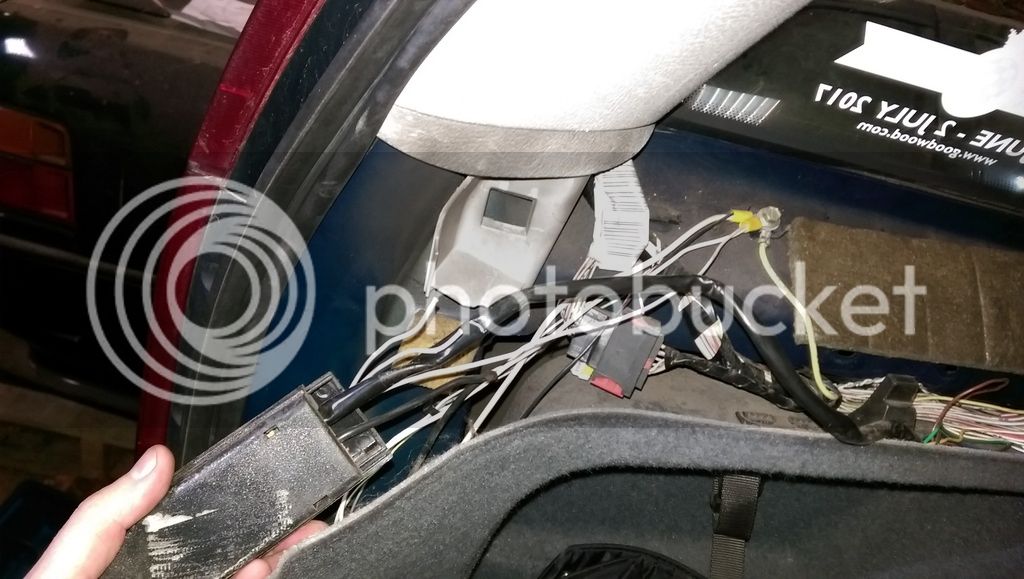 This was the first time I had worked on trailer electrics on a multiplex car, so I hadn't previously heard of what I now know is a 'bypass relay'. However, the idea of this thing made sense to me and at least I had found a likely cause... So now to find a replacement. On a Sunday.

All autospares shops in the nearest reasonably size town were shut, so headed to Halfords in Chelmsford (back in the direction I had started my day). Checking online they showed one in stock...
Of course they didn't actually have one... (this is the second time I've had that problem with Chelmsford Halfords) and they told me they had never actually stocked that item and had written the '1' off, no fewer than six times already! In fairness, the floor manager was very helpful. She rang another store to check they did actually have some in and I set off to Rayleigh.
£40 and 2 hours later

I was back at the barn, in the freezing cold to try and remove the old one and fit the new.

Such a PITA job, fiddly, working in a tight space and in the freezing cold.

Anyway, all done and now much neater of course! 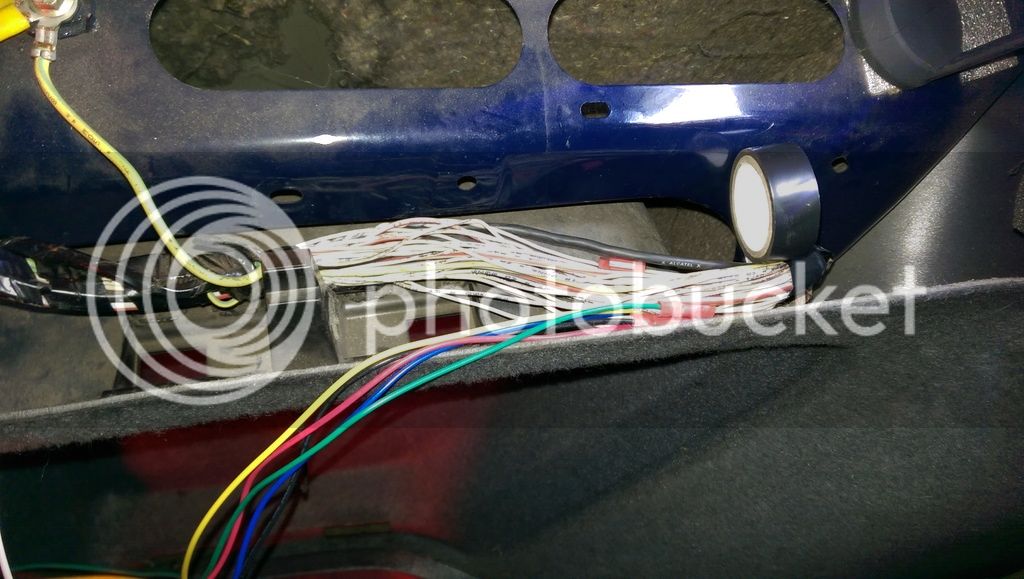 I would have loved to solder the joints and cover in heat shrink, but it's not easy with the multiplex wire (so thin) and in such a tightly confined space to try and break out the loom, so we had to settle for butt connectors. At least they're done with a proper calibrated crimp set though

I didn't take any more pics of the rest of it (was too cold) but it's all loom wrapped up and put away neatly.

After all that (took another two hours to strip the old crap out, tidy it up, fit the new stuff, test and then box the car back up) it was too late to get over to the other barn - so achieved... a bit fat zero for what I had planned to do! Also ended up messing around the owner of the new barn (arranging a time to get in and then cancelling it)

At least it works though and there's one glimmer of hope I have...

Well all looking good on this being the cause of the odd tail light behaviour (makes perfect sense) but unfortunately not the cause of the battery randomly dying. So, no more messing about - a replacement Bosch Silver has gone in.

First time I've replaced a battery on a C5 and I must say... Gosh! What a brilliant bit of design! Easiest battery replacement EVER.
No tools, all by hand in literally minute, no awkward reaching - absolutely brilliant!
Top
Messages: 82