Right, I've not been on here much (no time - and even less to work on any of my cars

) meanwhile this thing has been plodding on giving generally good service, albeit with a few minor gremlins (post here to discuss them) and one hard fault that has caused grief.

I had noticed recently that the a/c seemed to be pretty inefective and when stationary I thought the pump only seemed to cut in very very briefly then cut straight out. This had suggested to me that the cooling fan wasn't being switched on by the system but I hadn't got round to looking at it and since the engine temps had never strayed above mid-way, I assumed it was an a/c control related fault rather than a cooling fan fault (so hadn't seemed urgent).

Anyway, a couple of weeks ago I was sat waiting in a carp park on a baking hot day, with the a/c on while I looked around on my phone for best deal on something I was intending to buy. I was woken from my phone-daze by the car beeping at me and looked up expecting to see a low fuel message... Instead it was engine coolant temp too hot. Checked the gauge and yep - had just popped into the red

Switched the engine off and it dropped pretty quickly by enough to lower it off the red, restarted and moved off. No puddles behind so it hadn't boiled over/lost coolant. Drove at low engine revs in clear air and the temp started to come down sooner so... yep, looked like cooling fan knackered.

This weekend I went out and checked things over...
I didn't expect it to be the relays/wiring (known trouble spot) because I had looked all that over when I had the bumper off last year to fit the HID headlamps.
First things first - fuse. Yep, MF1 50 A fuse blown.
Second - Check the cooling fan and... Seized.
I could force it over, then I would get about 30 degrees free run and it would seize again. It's not catching on the housing, it's the bearing/motor part that's mechanically seizing.

A quick look round online shows this isn't an unknown phenomenon, but I couldn't turn a replacement nearby and the cheapest used fan (of the correct type) I could find was £24 delivered.
eurocarparts have a 66% sale on this weekend, so... means a new one from them is just under £60.
The extra £35 is easily worth it IMO, given there's no knowing how long another used fan will last (given reputation that they do fail - which is pretty p**s-poor imo on a car that's only 16 years old, but I guess that's the world of modern carp parts for you...) and that it's a bumper off to replace.
Gone for that, just got to wait for it to be delivered now.
Top

Amazingly quick delivery by eurocarparts. Ordered it on Sunday afternoon, Monday was bank holiday, mid-day Tuesday it had arrived!
Yesterday I set about fitting it and...

it's the wrong one 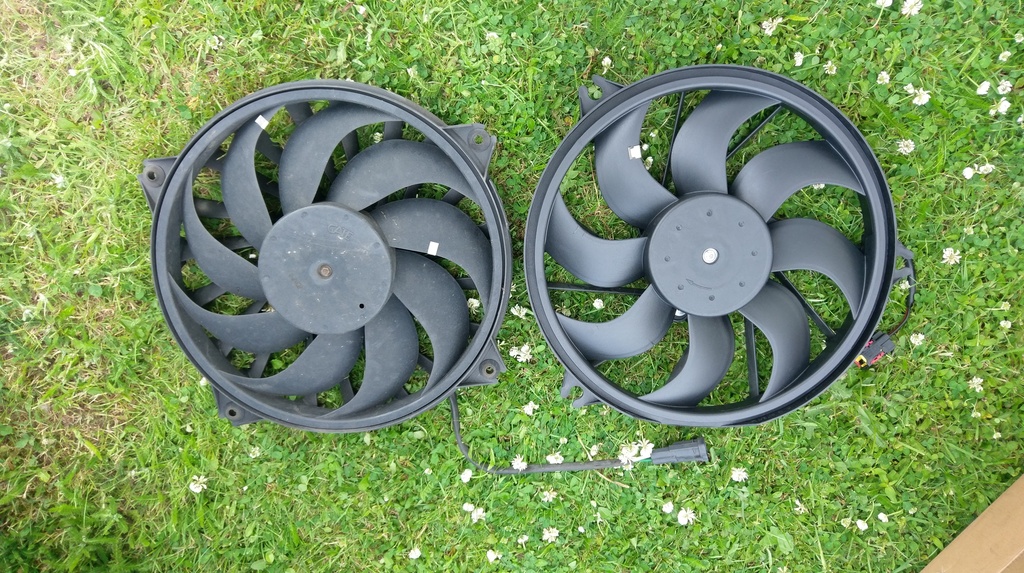 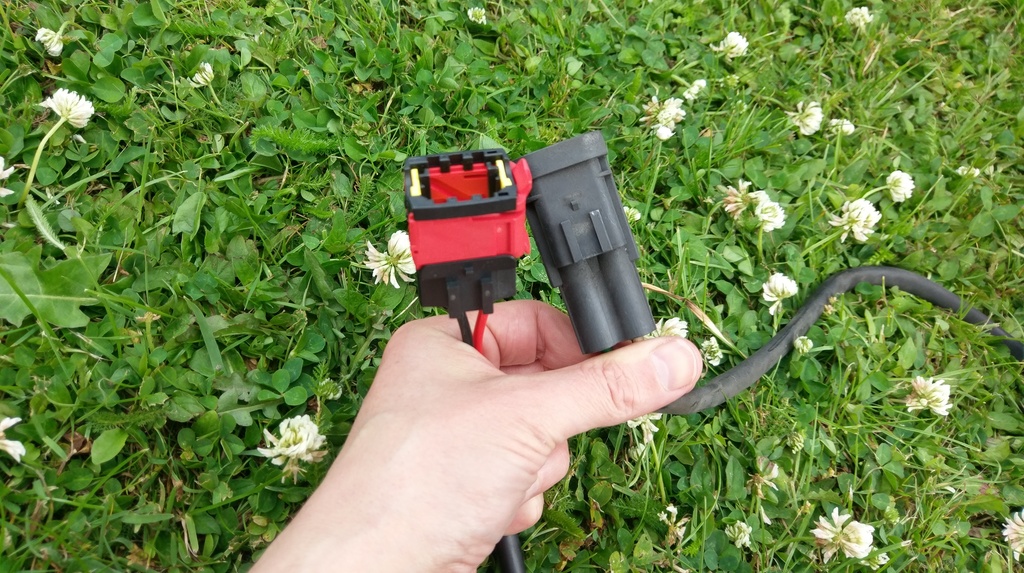 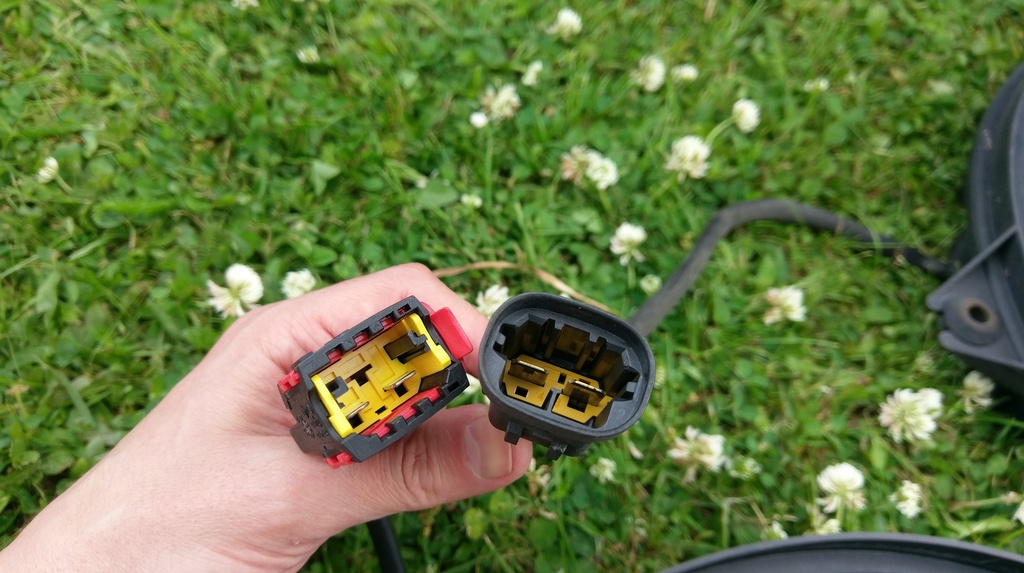 The details (photo and part drawing) on the website are correct, part number on the box is even right. looks like the wrong item packed in the box by the oem. Frustrating... Have to see what they can turn up for me next week.

Took the opportunity to change the second hid bulb though (pax side is a nightmare without taking the headlight unit out of the car) clean out the rad area and vac the condenser fins clean though. Condenser isn't in great shape where it sat behind the fan motor. I guess it gets no air flow there, so just ices up continually, which will do the aluminium no good. 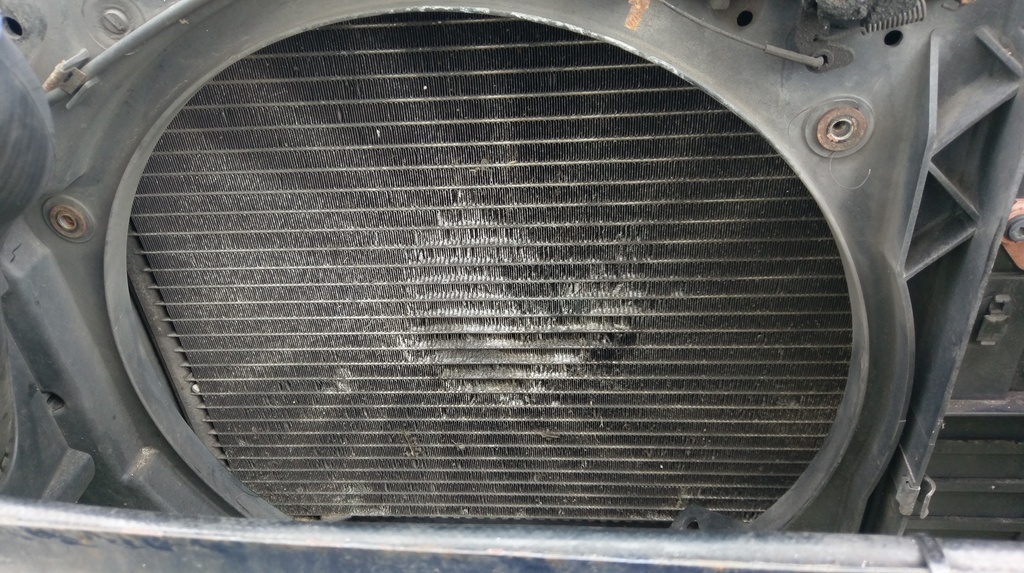 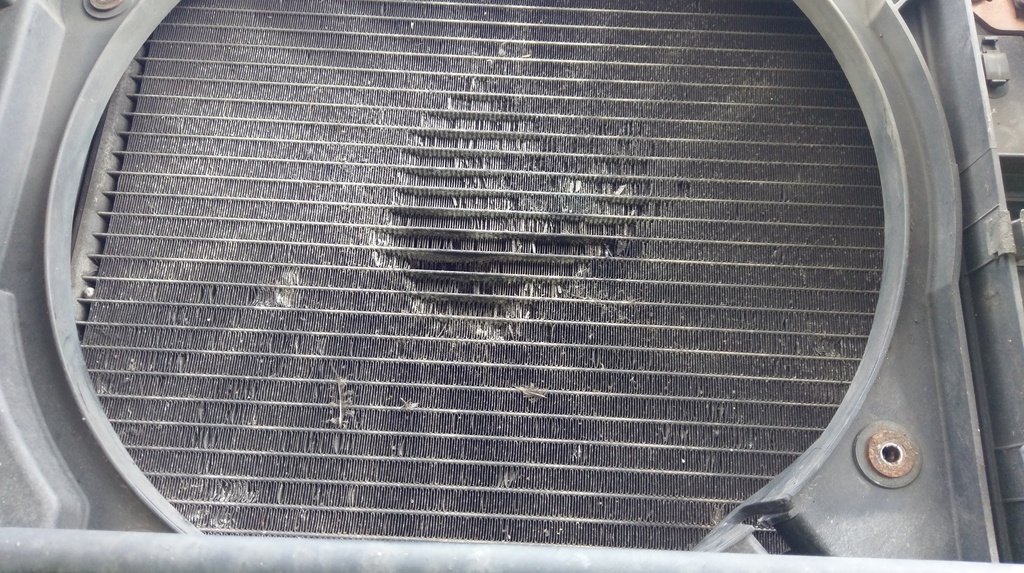 I was wracking my brain cell to try and remember where your post was as my fan seized too - had an EML up last Friday (28/5, ambient temperature here was 37°C ) and the and coolant temperature was a bit higher than normal. Investigation yesterday proved the fan was indeed stuck.

Looked on ECP and GSF as well as eBay and the ones on ECP and GSF were £96~£135.
With GSFs discount that would have been OK but they were out of stock.

Couldn't see how you had only been charged £66 and they said there was no home delivery on them.
Yesterday found the discount code so also got mine for £66.50.
They would have done home delivery - there are three branches all within a ten mile radius of my home - but will call and collect tomorrow evening.

That's a bit niggling with the fans and connectors Iain

CitroJim wrote:That's a bit niggling with the fans and connectors Iain

If mine is like that when I collect it I'm tempted to do a cut and paste type bodge on it - then it will match the rest of the car.
Top

that the staff were trained to get the sale wherever possible, and this included deliberately supplying a part known to be wrong - the idea being that they'd then hurridly get the right part in stock so that when you phoned up to complain a day or so later, they could say "ah, sorry, yep... we've got another one on the shelf that's right".
There were also tales of them getting their own brand batteries (might have been something like 'Tiger' brand

) made in China - and when they investigated why so many of them were coming back under warranty, found some of the lead in them was replaced with wood

bobins wrote: There were also tales of them getting their own brand batteries (might have been something like 'Tiger' brand

) made in China - and when they investigated why so many of them were coming back under warranty, found some of the lead in them was replaced with wood

I laugh but that I can believe...

Many years ago I was unlucky enough to receive a couple of counterfeit diesel filters from possibly the same outfit...

They failed spectacularly after only a few hundred miles... The glue melted and gave way on immersion in diesel!!!

I complained and eventually I got some satisfaction but it was hard work...

I posted about it on here and initially upset the moderators for being a bit too accusing and naming/shaming the company!

Collected my fan from ECP Gateshead this evening and the connector is the correct one so presumably yours was incorrectly boxed or labelled.
Top

Excellent news myglaren.
They've told me to return it to my local store and they can arrange refund or replacement. I'm off work for a week from tomorrow, so can get on it from then.
Top

I have never heard the fan in mine . Looking from the front, what direction does the fan turn in?
Top

Yes, you are right... I was thinking of building a/c systems when they work as a heat pump (run in reverse to provide heat as well as cool). In which case, I'm a bit lost as to why it's corroded behind the fan boss then!

maybe no air/rain flow means road salt doesn't get cleared away from it, so that builds up instead?

As for the replacement fan... Dropped it into my local store yesterday, fully refunded (including delivery charge) and replacement due in today with price match

lexi wrote:I have never heard the fan in mine . Looking from the front, what direction does the fan turn in?

Clockwise according to the arrow on the fan boss.


Mine 'fit' but the lead was too short to follow the moulded channel and still fit the plug, unless I have missed something.
A bit of bodgery took place and it now works (I think)
Haven't actually heard it running but engine temperature according to the gauge on the dash is now back to where it usually lives - sort of 'seven O'clock-ish'
Top

Second one that came in stock this morning was the same as the last (the same guy served me and checked it in store). He found another one at another branch and got them to go out to warehouse, open it up and check it first. Was the right one, so he had it couriered over for me within 2 hours. Excellent service, I have to say.

Just about to go out and fit it.
Top

Got it fitted that evening.
Fan fitted fine and the correct connector, but as someone else mentioned recently, the tails for the plug were a lot shorter, so it's not possible to refit the plug correctly on its original mountings.
This shows the length of the new plug at the bottom, taking the route it should and the top plug on the car side, pulled down further than it should be - big gap still; 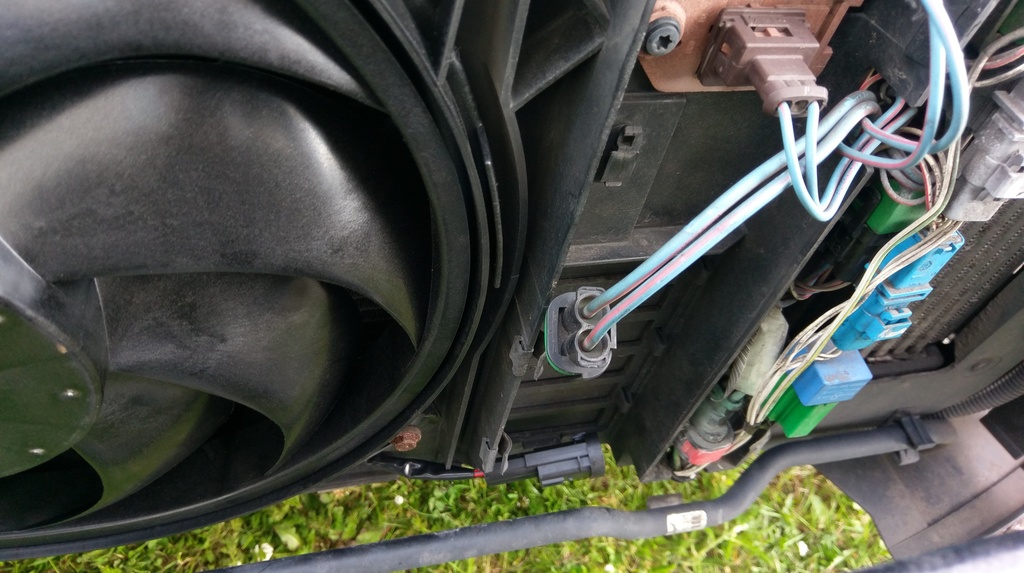 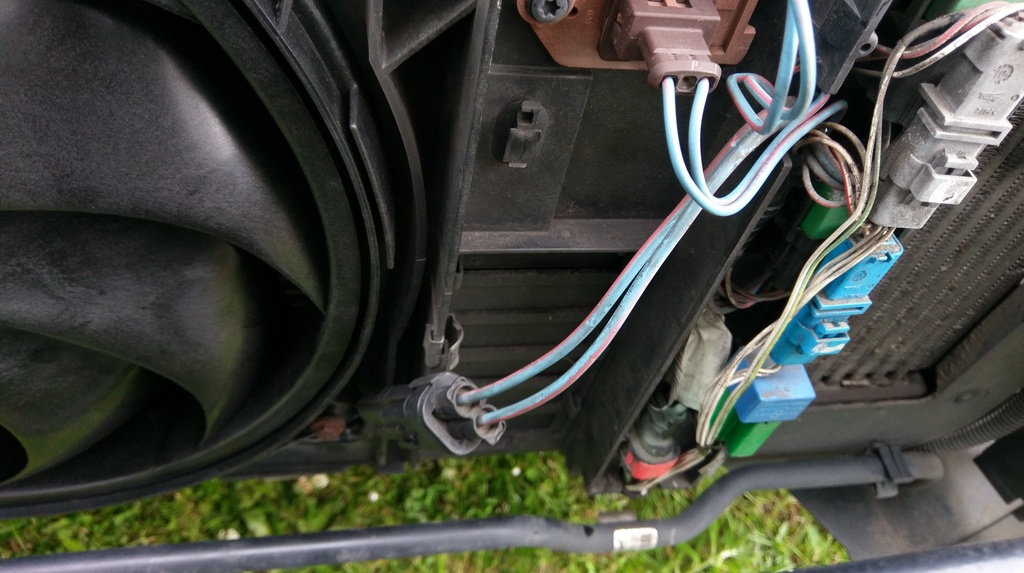 I was able to move one of the cable clips so that it least the bottom part was still held and not completely flapping about; 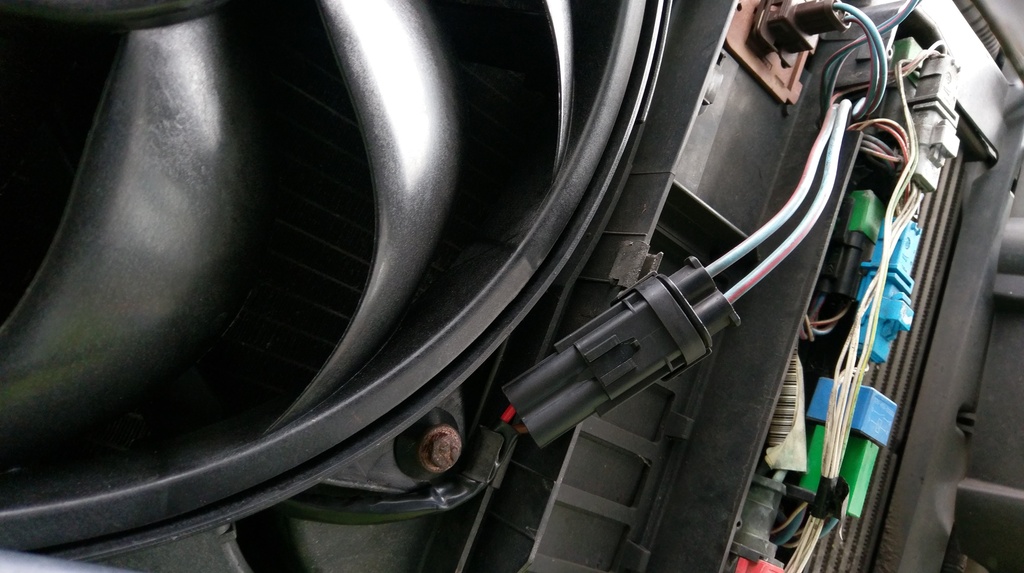 It's far from ideal. Cables aren't pulled bar tight, but still too tight for my liking, plus the plug is now exposed to the open part of the grille and not secured (itself) to the front panel; 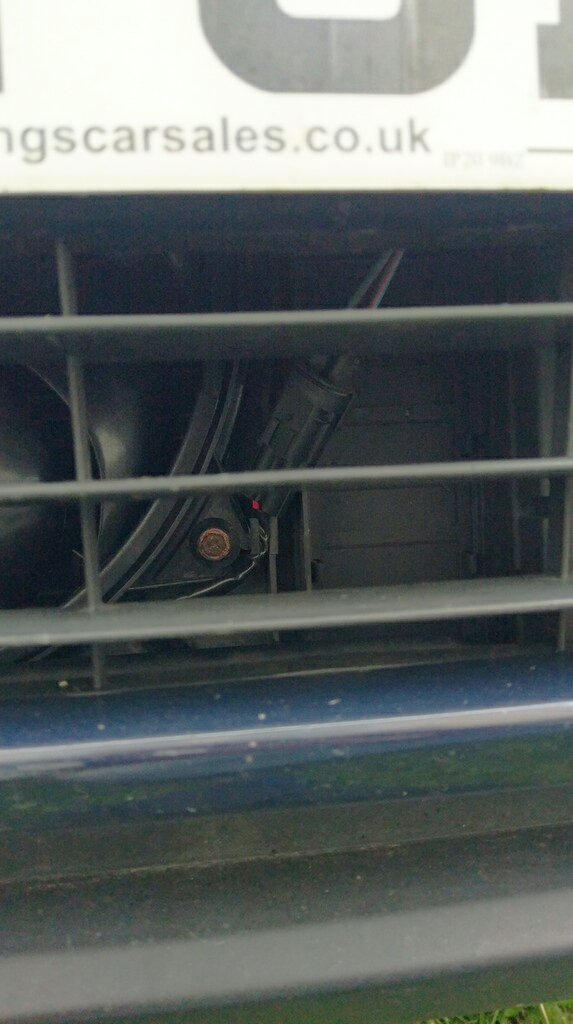 The only proper solution is to extend the wires, but it was starting to rain, so I wasn't in the mood to be getting on with that... I have cut the full length of the plug/cable off the old motor so I can use that to solder on and extend someday in the future.

Great to know it's all working again though. It runs surprisingly infrequently with a/c on - just cuts in for a couple of seconds and then out for a few minutes. It's a massively thirsty bugger though, so perhaps that's for the best!
Top
Messages: 82