So done by the weekend then

elma wrote:It has a sunroof and no aircon. I had a look but wasn't sure, mine are like the diagram below. 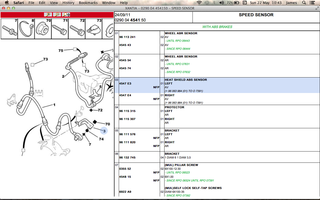 Do I need to remove the sensors to see these posts? I'm going there today so will have a go at getting one out.

As far as i recall the sensor fits into the hub and then the pillar with a central nut holds the sensor in place although it wont come out even after you've removed the pillar. On the top of all that the heatshield and then that itself is held on by another small nut. So .. the sensor itself doesnt need to come out, you just remove the top nut, lift the heatsheld off (unless it goes to dust itself and then unscrew the pillar via the slightly larger nut which is fused into the pillar itself. If poss, give them a splash of releasing fluid ... plusgas etc. And, I could be interested in your sunroof, giveme first dibs if the car eventually does go to its maker

Theres not much to report on the Vsx front at the moment.
The poor cars been sat outside minus its headliner for the last few weeks. I found when replacing the sunroof motor that the mechanism was truly jammed and needed replacing itself.

In removing the headliner I noticed a few other things that have really put me off doing any further work to the car. Firstly the braces that give the roof it's stiffness have held condensation over the years and there is rust between the roof and the braces. Secondly the seatbelt mountings and hangers are looking past their best, they are fatigued and old. Finally theres been a fair bit of electrical overheating going on which is sure to cause problems in the future if not tended to.

I'm yet to make a decision about what to do but I no longer feel like the extortionate cost of tax and insurance for this car are worthwhile. My gut feeling is store it and fix the problems one at a time as I'm able, the price of running a Xantia has been silly for me so I may move it on rather than let it sit unused and call it a day with Xantias. I actually called it a day with Xants many years ago because I thought they were getting hard to keep on the road, these most recent 2 were a welcome surprise but the expense and difficulty in keeping them on the road has been a real pita and I honestly haven't enjoyed them like when they were 10 years younger.

As for the Scenic I'm still really enjoying it. Our time together is due to end shortly but it's been a nice experience to drive a fairly modern car for comparison. It's not 100% healthy at the moment unfortunately. When I showed Dad what was wrong he basically said well its over 80k maybe it's time to get rid. In which case I'll definitely be the new owner even if the engine isn't quite the one I'd choose.

Faults with the Scenic include: cutting out when started from cold, an oil leak from the rocker gasket, air in brakes, missing engine cover, lost power and it's wobbly turning left like theres a worn suspension bush. Nothing too bad really, the cutting out could be the dephaser pulley but that was replaced not long ago and is under warranty. I'm hoping I get approved to spend an afternoon sorting it out, I don't see the point taking it back to a garage who did poor work to get them to improve it, they've set their standards and pinched the engine cover.

Shame because I found Dad a really good independent after the last Renault main dealer fiasco. What actually happened that time was it went in for a fan belt and they quoted £850 for a new alternator and refused to give the car back until the alternator was fitted because it was dangerous. Wouldn't let me near the car to check it either so Dad sent an Rac inspector who said they were telling porkies. Different Renault garage but same old service levels.
Top

I was well taken with the Scenic James. Especially the keyless entry system...

I se it as a quite worthy stand-in for the Xantia whilst you set about making it all good again...
Top

Have to say, had it been a BX with the hole in the bulkhead, I would have sorted it,but I thought the Xantia was not worth it in the end.
Top

I've ruled out the C5 already on the basis that I don't like the Mk1, plus would have to be hydractive and hence I think more trouble than I'm up for.
I'm more interested in something like the Scenic, a 207SW, Berlingo etc. I probably want a medium size engine like 1.6 petrol or Hdi and I find myself looking at camper vans every time I search. A camper van totally doesn't fit the brief but I feel like it's whats coming, I keep looking at this at the moment. looks like it just needs a night heater and it'd be a perfect little hotel on wheels.
Top

Berlingo is excellent James and you know well what I think of the 207....

I once had thoughts about a camper and was thinking of a C15 conversion but for reasons you know that's now never going to happen...
Top

I'm totally sold on another van now, been dreaming all day about spending weekends living in the hills with the Dog. I'm not sure exactly what size, in my dream its a LWB but in reality the smallest I can lie down in will do.
Top

Your still looking for a berlingo then [emoji4]

A Berlingo will tick all the boxes James... Van, estate and casual camper all in one...
Top

And cheap to run, small enough to park, etc

Thats the sort of thing, compromise on those is the low roof which makes sitting in it and getting dressed a pain. Something like a Peugoet Expert High top might be ideal.
Top

I know nowt about hydractive 3+ but I find the hydractive3 on Otterchops to be reliable. Bit firmer than hydractive 2 but not as good overall as the BX which had a lovely mix of pliant straight line ride that firmed up,to perfection in the twirly bits. I found the Xantia had a bit much body roll for me,
Top