Congrats on the qualification elma

WELL DONE Sir......now you can pop over and wire my garage for me as practice

I'd love to, however there is a 3 week wait on the wrong parts.

elma wrote:I'd love to, however there is a 3 week wait on the wrong parts.


Trade you some Exclusive Alloys and some Heated Leather....

I've no need for either, just take me out in the Activa.

Is the Leather black?
Top

It's been a while now since I wrote anything here. I've been really busy with my new job, travelling 140miles a day and working 10-14hours. It's left me and the car both a bit unwell so I've given myself 2 weeks off now.

Poor red is not taking things very well. The suspension is still rock hard with the rear developing a mind of its own lately. The idles wonky and the smokes plentiful. Its rattling everywhere and cornering is dangerous in the wet. I don't have the patience anymore for it, this cars had so much work and progresses steadily backwards.

I'm going to have to get greens clutch sorted, probably next week. Im really weak after working so recovery first. Once greens sorted as my work car I'll be shopping for a toy to keep at home. Activa, Xm, CX, mr2 and. Volvo Amazon is the shortlist.
Top

Take it easy James and recover fully before tacking the clutch... That's a heck of a schedule you've been trying to keep up with there. You seem to have taken it better than Red... It would have killed most by now I reckon...

You must be made of very stern stuff

I recommend an Activa as a toy...

Yes, that mk1 has been in my mind all week now.
There's a local Xm as well to look at and I'd drop everything for a CX.
The other 2 are long term ambitions.
I've never been car shopping with more than a few hundred before so I'm going to do a lot of looking and get this right.

I used to be very tough Jim, crossed the Karakorum highway by pedal power. Nowadays all I have is will power, it works though.
Top

elma wrote: I used to be very tough Jim, crossed the Karakorum highway by pedal power..

There has got to be an incredibly interesting story here James. Do tell please, love to hear it

Just been reading about the Karakorum Highway on Wikipedia

It was a 2 week hop, we went from Gilgit to Chichal. I took an '01 Klein attitude Race, lightweight MTB that was born to climb.
I'll have to scan some pictures for you, especially the mountains and bridges. It's hard to describe in words really. Our back up vehicle was a Mohindre, Jeep type thing I think is made mostly of Peugeot 205.
We encountered everything from snake charmers to landslides along the way. Our camp sites were varied including the famous polo pitch at the top and the courtyard of a princes castle. If you've watched Michael Palin's Himalaya I basically did his journey in reverse. I got hooked on Asia and its people while I was there and its shaped my life somewhat since I returned.
I've been planning for years to rode the Khardung Lah from Manali to Leh. It looks and sounds even more disturbing. Not sure if it'll be touring bikes or supported MTBs but at those altitudes MTB is preferred.
Top

Love to see some pictures...

Wow I had an amazing night watching the Perseid Meteor shower. Very lucky for once North Wales was the place to be and I only live a 1.5 mile drive from a completely dark lay bay thats quite high up on backroads. Red came along with me and we sat for several hours watching. One that I will never forget was followed by a second, duller, more orange trail. No idea how that happened possibly breaking up or ionising atmosphere in its wake that burnt. There were some longer pauses but generally something to look at and at times it certainly was a shower.
Unfortunately I am now hobbling around with a stick due to an infection. It's not fun and I can't change any clutches, not to be beaten though I did manage a windscreen wiper. My Consultant missed our 2nd appointment today so I may be hobbling for some time. 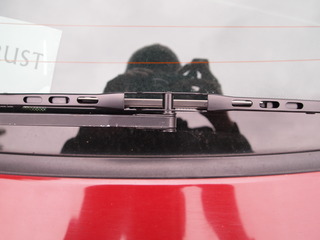 Reds feathering the outside of the n/s/f tyre so I've no choice but to get her in the air and investigate. I've checked before and found nothing, the only thing not replaced recently on the front axle is the drop links and inner track rod ends. Theres definitely a tug in the steering when turning right. I'll enlist help this time, can't carry the jack or shake the wheel hard right now. Hopefully tracking will solve it, I don't think they got it quite right last time.

It's my Dads birthday today. We decided (Mum and me) that it would be nice for him to drive a steam train as his present. Being expensive we ran it by him after making all the relevant enquiries. He said he'd rather have a go at the Land Rover experience, I think he's lost his marbles. Lets hope he enjoys tearing round in a landie.

I promise to get pictures up of Pakistan shortly. I have to collect them from storage though so may be about a week. When I moved I only took the car, clothes, tools and Dog as I need to move again asap.
Top

I've only seen a good meteor shower once (about 18 years ago now) and it was absolutely incredible. Truly something not to be missed.. This time it was overcast here and well past my bedtime...

Sorry to hear about the hobbling James and I trust it's nothing serious... I dead such a thing as it would stop me doing so much I love, including swimming, karate, cycling and the cars. All I could do would be baking, cooking and vintage wireless!

I'd love a drive of a steam train and I'd favour that over a Landie experience any day! I have done one of those Landie days in a V8 Range Rover and it was good fun but not as good as a steam train though..

If the feathering is caused by the inner track rod ends then you'll be able to feel the play in them. If no play then they're OK. I'd critically examine the 'P' bushes and especially the forward wishbone bushes as just the tiniest amount of play in the latter can translate into a lot of movement under load...
Top

We're very lucky here, I've viewed the Northern Lights from the forest in Capel Curig several times when I lived in the wilderness. It is quite stunning, like microscopy on a massive scale. I always find myself thinking of Brownium motion whilst stargazing.

Hobblings caused by my kidney stones, I've lived with them for a couple of years now. Haven't cycled in ages. I get constant bladder infections which I can't have antibiotics for as I've used my quota. Stones at 8mm now and I fear I'll be dropped off at Hospital again before I'm seen by appointment. To say I'm angry is an understatement, I can't even get a consultant to turn up when I pay for their time privately.

Steam train is more than a machine, it's alive. I've ridden down Snowdon on the footplate of one when I worked at the summit. I really feels like you're on a machine with a heart and lungs because of the slightly off beat rhythms. Until I rode on one I never understood though. I will probably buy myself the experience Dad declined in the future, seems a waste to do all that research for nothing. To be fair on Land Rover their experience does look terrifying. I drove right by the Halewood one everyday for 2 weeks while I worked there and they have some really big stuff to destroy their cars on.

I couldn't feel play in the inner track rods when I checked recently. The bushes (front and rear), track rods and balljoints are all new and tight as are the strut tops. Good brands were used like Febi Bilstein and Lemforder. I need an OS drop link I know, but that isn't the culprit, it's probably grip transferring between the wheels due to the tracking. If theres nothing obvious I'll swap tyres between axles and get the tracking done.

The cars really getting on my nerves, It's chances of surviving the Green one getting on the road are diminishing. I've never had a Xantia that spat out repairs in my face like this one. I think it just plain doesn't like me which is ridiculous as I've given it so much to keep it alive. Sorry to bitch about you car but you're doing yourself no favours, I didn't have to buy you that windscreen wiper did I?
Top
Messages: 1560