The control arm bushes are sorted now. Press worked wonders taking out the old ones. Didnt do any car work today I've come home for bath and bed as Im worn out and starting to feel ill.
Top

is it possible someone has mixed the oatty/red/orange antifreeze with the blue/green stuff ????, as although i have never seen it mysel, its meant to congeal if mixing both types,

on you first attempt removing the swivels did you refit the swivel nut nice and snug to stop the tool lifting out ?????
Top

I flushed the coolant when I did the water pump. It was refilled with blue and has not been topped up since. I don't have time or strength to sort that out right now. It won't fail the mot and I have a virus which has knocked it out of me.

The nut was definately tight on the balljoint, it was just so seized it didn't want to come out. I've done them before on a xantia so I knew what to expect. That one was tighter than usual. I think the n/s has been rebuilt more recently than the o/s. All the seized bits (ball joint, brake hose, drop link) and the really knackered bushes were o/s which seems unusual. I heated the n/s just to make sure but I doubt it was as tight/seized.
Top

In response to myself, the coolant will be flushed and cleaned again as soon as the car is home. I was just being lazy because I felt bad. My tyres and exhaust gasket (it's not a brillo gasket now I've seen a new one) have arrived today so bar the coolant I've got everything to get it finished.

I've took the day off, other than dogs walk, and got the house tidy today. Feeling more normal now but may have another easy one tomorrow, see how it goes.

I've been contemplating my next tool as well. I quite fancy a coolant pressure tester. I have a leak somewhere that I can smell in the car but is so small I can't find it. I suspected the heater matrix but I'm not sure. The front carpets do get wet but it's winter and there are holes in the matts. Once the bills are paid next month I think I'll get one. My bike pump goes way over the required pressure though, I may be able to modify an expansion cap with a bike valve. Looks like the 306 is about to donate another piece.
Top

A duff matrix will give itself away with the smell Elma so if you can't smell it I doubt the problem is the matrix...

Rest well, have a good weekend. Looking forward to the next instalment

You need a mahoosive compressor to get best out of a rattle gun.Forget 3hp motors and 50 litre tanks........that's what is here.
Mate has a giant Broomwade in his place. My 240v Rattle gun can't compete with that.....no way.
Top

Well I seem to have had a bit of a lie in today. Feeling alright so I'm going to spend the afternoon with the car. I'd like to get it back on its wheels today.

I totally agree about the compressor, I used to have the biggest sealey one when I built bicycle frames. For me now though the 240v is more sensible. The compressor cost 10x what the 240v gun did and was second hand. The bigger issue though is having to drain it and maintain it if you don't use it a lot the big tanks eat through electric and you shouldn't leave it full over night. I'd buy another one certainly, but only if it were making me money or i had over 2k a month coming in. In fact I do miss it.
Top

Progress is happening again slowly. Its all back together finger tight. I've changed the track rod ends too. I'm having trouble getting the ball joint nuts tightened, just spinning and no Allen head to stop it. Tried twisting to no avail so will try car weight next. Its a bit damp round the brake hose as well so I'm going to tighten it all up and get the system pressurised to see before I go home. The last little issue is one of the ball joint heat shields broke, my fault it was the better one. I've no choice but to go on without it. Hopefully I can get one before the rubber fries.
Top

Got my laptop now so can elaborate a bit. I think it's bad me having the tablet thing, look at all the posts. I'll try to stop that now.

So quite a lot of good progress today. The front is rebuilt and back on its wheels. I found a broken clip on the air pipe to the diesel pump which may help with my idle/turbo problems too. 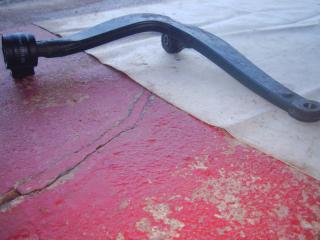 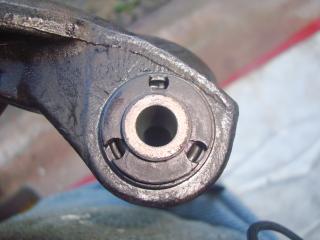 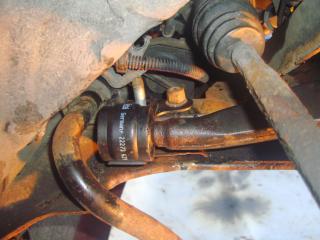 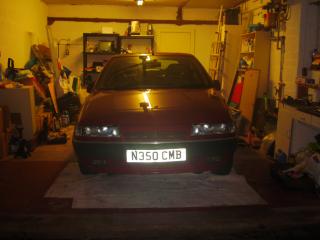 It's nice to see the car back on 4 wheels again.

As for the bushes those little ones are a pain to change. I can't decide if they are worth the hassle or not, seems a big waste to throw away a perfectly good control arm though. I was a bit baffled when I went to press in the new bush, the arm is in the way so it can't be pressed. I thought it was game over but it turns out you can squeeze it in with a vice. Everythings fitted and torqued anyway, balljoints included. I had to put the weight of the car on the wheels and turn the steering to get the balljoints to stop rotating with the nuts. I'm impressed with the apparent quality of the FEBI bushes I bought from euro car parts and also the Lemford track rod ends which had new nuts included.

A few less good bits happened as well though. 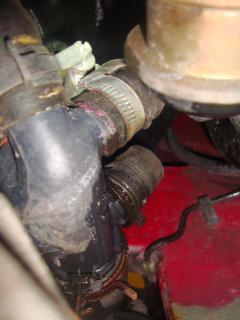 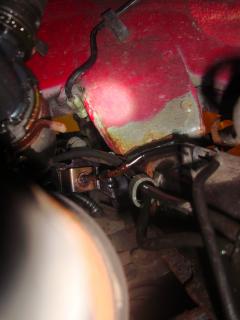 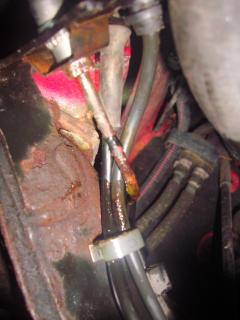 The thing in the first picture seems to have leaked coolant from one hose previously and be leaking LHM from another now, bit weird. The part is just below the turbo and I haven't worked out what it is yet. The other two are that brake line. It's becoming my nemesis on this car I really thought I had it done a few days ago. I shall have to buy a flaring tool, I'm fed up of this happening it isn't the first time. I didn't really want to drive the car until I got the tracking done now I've done all this work so it's probably not a bad thing. The car doesn't stay up for 5 minutes now that it's got all these leaks and not been bled. Poor thing.

I'll fix as many leaks as I can tomorrow, clean filters, replace the rear callipers and give the car a clean because it's going to bed for at least a week. When I wake it up I'll have a flaring tool and a few shiny end bits and we'll go straight to the MOT from my parents after bleeding. Just hoping I don't end up welding nuts to snapped bolts.

Any recommendations on a flaring tool? I had a quick look and theres a vast range including a weird offering from Sealey. No experience using them myself and probably don't want to spend more than £50 but hopefully less.
Top

to tighten the track rod end nut place a jack under the swivel head, and jack up enough for the tapper to hold tight in the eye
( no not your

There's a mob in Buckingham called Automec who do a very good set of flaring tools Elma..

Worth having a natter with them... I spent some time speaking to their rep at the NEC Classic Car Show last year and got to try them out on Citroen piping..

Excellent I will get onto them. Stupidly I didn't measure the pipe diameter, could anyone please assist? I shan't have a chance until Thursday.
I just cleaned the car today and lay it to rest, it looks lovely and won't mould while its stood now. I cleaned the scenic to say thanks as well, haven't seen it shining like that for years. Didn't do any actual work, fed up of cars right now and as we know I brake stuff if I'm in the wrong mindset.
Top

elma wrote: I brake stuff if I'm in the wrong mindset.

We all do, which is why it's important to attack jobs only when the attitude is right...
Top
Messages: 1560