It's an intriguing point, my Polish friend Marek and I have argued this for years. He says almost exactly what Jim says regarding being right handed. I argue that I am right handed so I'll keep that one on the wheel. Marek does struggle with RHD though and will buy LHD cars over here. He does exactly what my Dad did in hire cars on family holidays, accidental downshifts instead of upshifts. The only way to find out is to try I suppose, I've never driven any Lhd cars.

If this does turn into a must have then it will be some time in the making. I'll get to know the cars and engines before I buy one plus theres probably pitfalls to avoid with the importing. I've promised myself a LT35 camper van when the Mushroom Farm finally gets going so that will be first. Also theres another Xantia I'm after too. Maybe I'll manage a holiday this year, I'll try a hire car abroad and see how I get on.
Top

I couldn't get on at all the one time I had a hire car in Tenerife. I had to laugh though it has winter grips on it. It was January lol. I couldn't position the car, struggled with the gears and struggled with roundabouts. If I ever hire a car abroad again it will be an auto.

Well its chucking it down again. I'm fed up of wondering about the alternater so I'm off to get stuck in /drenched. I don't think there's any other jobs left I'll do in the rain though after that, they all have an element of 240v or hydraulics.
Top

Hope it all goes well Elma. It's chucking it down here now...
Top

Awesome, done and it was dry. Unfortunately revs still dropping with load when hot, although less so. Next all wires and diesel pump are suspect. The old alternator has something rattling around inside it so was duff anyway. Mileage was107849.
Top

Not the best timing but look whats come to light today.
v6 24v manual rhd
They're out there if you want one enough.
Top

Go on club-xm. I bet they know this car and all of it's history...

I could be very tempted if I had a spare 2.5K burning a hole in my pocket...
Top

I want to Jim but I can't, I'm on a tight budget for now. If I start delving I'll end up buying it and screwing up the farm. I do hope it goes to someone that'll treat it right though. Normally with things like this I can find the money, but even with haggling thats just a bit too much.
Top

Indeed, far too much for me and I don't have the right home for it. A car like this needs to be cosseted whereas mine has to live outdoors..

This happened coming up the hill to the house about half an hour ago. 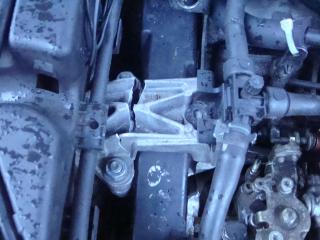 First sign I got was a pop then the car suddenly sounded like it was trying to be the V6 in the turbo. It sounded normal out of the turbo and accelerating lightly though. Pulling away and turning there was a clatter from the O/S like a balljoint had gone. Got home popped the bonnet and I could see the air box was not on it's little clips properly and the engine mount is snapped.

I'll need to be getting underneath to see what the damage is. I'm guessing exhaust part or turbo, plus the lower engine mounts. I'm a bit annoyed really thankfully it happened minutes from the house so I'm stranded until it's fixed and the 306 should have the parts.

It gets better, I just spoke to Mum and she's at the side of the road with the 14 plate 308 1.6 Hdi my parents bought this week on 4k. It's got DPF fault and Engine fault, just going onto RAC code reader as we spoke. Funnily enough it was bought to replace the same car that had major electrical issues at 105k. I think they will reject it and I'll probably go back to cycling, this is the 3rd time since they bought it. No surprise really it belonged to a retired couple who drove it carefully.
Top

It did need a new top mount, the rubber nose at the back was missing. Same on the 306 though, I didn't expect this to happen. I wonder if theres another problem I didn't notice. No avoiding the rain tomorrow though, got to fix this one asap.
Top

Couldn't sleep and it stopped raining so I've been out tinkering. The gear stick had gone wrong as well but I hadn't noticed. I was stuck in 2nd with the stick too far forward. It was an easy fix, air box off and put the ball back in the hole at the end of the main shift linkage. I had to undo 2 of the little ball joints to get the movement but it was all fine.

I got the engine mount nearly undone next on both cars. I just need to support the engines later in the light and undo 2 bolts on each. Then I can change them over no problem. The break has been caused by the engine twisting back, I do think it is because the rubber was half missing in the damper. I'll post a picture later to show what I mean. Hopefully this means no damage underneath, I will still have a good look before I drive again though.

Feel a lot better about the whole thing now, I can get the mounts changed in minimal time later maybe in a dry spell. Noise not explained yet though, hopefully vibration but sounded more exhaust. Doesn't matter now, back to bed for a bit.
Top

A good time to tinker Elma

I get a lot of my best work done very early in the morning...
Top
Messages: 1560