DR strings prity much dried up a few years ago.
I used to buy them locally but I think they stopped distributing to the Uk.
I'm fond of buying locally too, particularly from businesses owned by a person rather than large chains or corporations.
I'm fussy where my money goes, I like to pay the wages of decent people rather than rack up profits for faceless entities.
Top

Zelandeth wrote: Guess I'm a bit old fashioned...Generally if I have the option to just go out to somewhere local and grab something I'll almost invariably take that over ordering it online.


Zelandeth wrote:Which is rapidly becoming an exercise in frustration given how rapidly shops that sell anything other than clothing, jewelry or over priced consumer tech seem to be vanishing.

Yes, it is a sad loss we're all suffering and suffering because they've gone...

Thing is, people are so time-poor and lazy these days they would rather click a mouse in eBay rather than walk up to their town and browse the shops...

I really miss electronic component shops... Remember when any decent town had at least one?

Maplin just doesn't cut it for me... last time I tried to buy components in there it was so frustrating and difficult it was beyond belief...

Now if you want simple things like capacitors, resistors or a few common trannies eBay is your only choice...

Ironmongers I miss most... Want a tap washer? It's a trek to B and Q now and available only in assorted packs of ten, 9 of which you'll never use

If looking for tap washers and the like, Toolstation are my usual default choice now. Yes they're still in bigger packs, but at least they're cheap enough I don't mind. Needed some (M5 from memory) machine screws a while ago. Pack of 100 was cheaper from there than 10 were from B&Q...
Top

I just treated my self to dark side of the moon on vinyl. Finally got to the local record shop, it's amazing in there with all sorts of music I didn't think would even be on vinyl. Not going to make a habit of it as I paid £20 for a brand new copy. As a one off though it's made me very happy, will resist temptation to go back until I'm a rich man. Leaves £10 fun money for the bootsale tomorrow.
Top

It was a good buy, sounds amazing. Particularly Money which, with eyes closed, could be being played live right in front of you. I got a little carried away and now have one broken speaker, thankfully we have a box of them so no big deal.
Top

Many years (i.e. several decades) ago, there was a black MB 308 with a very well executed, but much larger, copy of that iconic sleeve design on each side. Amazing it still sticks in my mind.

Mole Valley Farmers is a great place for fasteners - & they must have an equivalent in other rural areas. Not as good as the Tractor Supply Co (no, not a Russian underground band) in America - I'll go armed with a shopping list next time.

On the subject of fasteners: (1) anyone know where I can get some black, countersunk self tappers? (2) what are the specs. of the hub carrier clamp to bottom swivel bolts? (every time someone does work in that area they seem to replace them with ones that are 1" too long - why?).
Top


elma wrote: I just treated my self to dark side of the moon on vinyl.

Will always be one of my all-time favourites and has to be in my collections.... I have an original vinyl pressing but good to know the 'new' vinyl pressings are good too!

I saw a FB discussion recently where some (obviously younger) person wanted to know what all the fuss was about and what was so special about DSotM...

He got plenty of answers!

I remember when it was first released... I was already well into the Floyd and had already got quite a strong love of them from Meddle. DSotM was positively orgasmic... I used to enjoy it initially through headphones as it did not enjoy much parental approval... Now I enjoy it on a period stereo system

It remains a standard and will always be so... I don't think it's ever not been available in some physical format or another (discounting download) for all the time since its release...

That and Meddle represent some of Pink Floyd's very best work in my humble...
Top

Unfamiliar with meddle, will keep an eye out. My copy of dsotm is digitally remastered so I'll still be rummaging through used records looking for an original copy to compare. It blows the socks off of my cd copy somehow. I don't quite understand how records work yet but it seems unreal that they were replaced by cds when the difference in quality is so substantial.
Top

Yes, do seek out a good copy of Meddle... Side 1 is nothing remarkable by Floyd standards but side 2, entirely devoted to a track called 'Echoes' - all 26 minutes of it, is awesome

The stereo encoding into vinyl is clever James... There's some good Wikipedia articles on it if you want a basic understanding bit fundamentally it's a stylus attached to a moving coil, magnet or piezo element riding a spiral groove and turning the undulations therein into small electrical signals which are amplified and fed to speakers...

Quality is critically dependant upon the skill of the person who originally cut the master disc, the mastering process generally, the quality of the turntable and most importantly the quality of the cartridge that turns to the stylus movements into the tiny signal voltages...

It is totally analogue so no digital artefacts...

Dirt and dust is the enemy of good vinyl reproduction...
Top

You've got a choice of two Jim. Probably easiest one for you is in the little trading estate at Stacy Bushes - next door to the Screwfix that opened about a month before the Toolstation did! Other one is down in Bletchley not far from GSF.

Service in there has always been top notch, so I keep going back. They do a proper paper catalogue as well which I for one really appreciate as I can always find things in there ten times quicker than on any website - especially if I don't know exactly what I'm looking for. Usual routine for me is find what I want in there, get the item number, drop that into their website to check it's in stock, then turn up at the store with the number, 30 seconds later I've got what I went in for. It just works.

More than happy to drop one of their catalogues off next time I'm over your way if that would be handy.

Screwfix are my usual fallback if Toolstation don't have what I need (they do have a wider fastener range), but are a bit more expensive (and don't have a free coffee machine).

Speaking of music (and more specifically 12-string guitars) I remembered something I stumbled across on YouTube years ago that was worth a share. Took me an age to go back and find it, was surprised it was buried under so many other faves in my library...then I realised that I faved it eight years ago. That'd do it!

Also on the subject of music and my assorted instruments, the Ibanez has a new set of strings waiting to go on probably tomorrow. Got a set of Ernie Ball Slinky strings simply because they're what my father always used to like, so seemed as good a place to start as any - they've been around since the dawn of time anyhow so that's something at least. Yesterday while the sun was briefly out, went and snapped another couple of pictures of it out in the Atrium.

Firstly, the serial number which if you're really bored (or insatiably curious like I always am) should allow you to look up precisely what model it is and where it was made etc...

Next up a closer look at the graphics on the headstock - firstly because the sparkle finish on the text always fascinated me when I was a child, and secondly because this clearly shows that it's badged Roadster, not Roadstar which is apparently the more common model.

Next two are just there because...well, for no good reason other than that it's pretty under natural light!

Really do need to get the poor thing professionally cleaned. Yes it would cost a bit, but it really deserves it I think.
Top

Zel, thanks for the locations

Shows how much I drive round MK now!

That Ibanez of yours is really simply gorgeous

I love it to bits!

Sadly, due to other events encroaching I've still not got round to tuning and starting on mine

maybe today after parkrun for a bit of relaxation and a much needed change of direction...
Top

I had very pleasing trip to the bootsale this morning. I managed to buy about as many records as I already have for £10. All of them are in really good condition with the exception of one, John Lennons imagine which is quite scratched. There's some interesting finds in there which will keep me entertained all weekend.

I also nearly bought a Pye valve radio for £10 but left it as it was missing the left knob and the big capacitors inside were a little rusty. It was the same as this one
https://www.the-saleroom.com/en-gb/auct ... f7014d2dde.

I missed out on a few led Zeppelin and Beatles records but the guy selling them wanted what I thought was silly money and I didn't fancy hanging round until closing time for a better price as I had a good haul and was £2 over budget anyway.

Finally I brought home a copy of Senna which will sit nicely by Rush, my only other Dvd. Senna and Hunt have always been my favourite F1 drivers, I'm so happy that Rush was made. Most folk looked at me funny when I said James hunt was my favourite driver ever for his attitude and sheer bloody mindedness, I think they guessed I made him up. He had no fear at all, just go for it and win at any cost which, even if seen as madness, is the attitude I think a racing driver should have. He used to be so hyped up he used to make the whole car tremble with his body shaking. I have massive respect for Niki Lauda as well, who was probably the better driver, but Hunt was the one that truly caught my attention.

Your Ibanez is truly stunning Zel, if my telecaster ends up looking half as good I will consider it an aesthetic success. Pleased it's wearing new strings, it totally deserves them and also many many hours of being played.
Top

Sounds like a good haul. Just realised that the annual radio, electronics etc bootsale down at Luton is tomorrow. Oh oh...
Top

Thankfully too far for me, I'd fill my entire caravan and then some if I went to that.
Top

If you ever see a Pye Fenman II radio then buy it, condition immaterial. Those are the absolute Rolls Royce of early VHF/FM wirelesses... They sound awesome!

I have one I treasure... 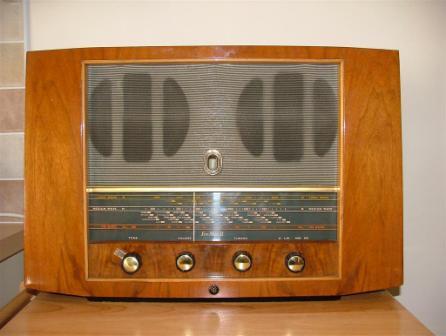 Zel, I'll miss that one too as I have the same problem as you James and I've spent my toys budget this month already...
Top
Messages: 1560