I've done it a few times now as its not far from us, (it's an easy day trip to Fort William and back) this time was to take family visiting from NZ for a scenic drive..

I wish I had a dash cam, I would have recorded 3 near misses that day, including one where a guy slammed on the brakes at over 40mph and stopped dead in the road in front of me and only then decided to indicate right to turn into a lane. I stopped in time and so did the guy behind me but the Toyota Hilux following him had to completely mount the pavement to avoid a collision!

I only noticed it in the rear view mirror just before setting off again.

Good job there were no pedestrians on this country road pavement.

Then there was the tour minibus that was going too fast in the rain in front of us on the highest part of Glencoe whose rear end kept oversteering and sliding on the wet bumpy road and looking like he was inches from doing a full 180 skid... Slow down mate!

The third incident was a guy some way in front of me in a small 4x4 whose left hand wheels wandered into the gravel rut trying to avoid a row of 5 oncoming cars who were edging over the centre line, he completely lost control of the vehicle for about 4 seconds and did a series of about 4 wild over corrections of yaw of at least 30 degrees with the tail flipping between left and right before managing to get it under control.

I totally thought his car was a gonner and was either going to roll, end up down the side of the bank, or veer into the oncoming vehicles, but he got it back under control! Props to the driver, although I bet he is more wary of drifting into the gravel in future!

I was many car lengths back and already braking as I saw it happen, but it was already running through my mind what I was going to have to do to help the guy after he crashed...

I have a dash cam, and it does a good job. This is a link to the uprated version. I would consider getting a bigger memory card for it, but everything else is good;

It's amazing what a difference even a small error in ride height can make Simon...

Gabriel is a little too high at the front and as soon as I can get some quality ramp tie I must correct that...
Top

I've been observing the ride over the last few days and the ride height has felt spot on, and very consistent.

It's suddenly just dawned on me that because the clamp was loose enough to slip under static suspension right up settings for a few days, the clamp might have been slipping a little bit in response to large suspension movements whilst driving!

For example if you hit a large sudden rise in the road that would nearly bottom the suspension out, maybe the movement was sudden and forceful enough that the clamp would slip slightly in response to that, resulting in the ride height now being too high for a while. And the converse could happen if you drove over a sudden dip, now it would slip the other way and cause the ride to be too low.

Since re-adjusting the height and tightening the bolt up good and tight (I think I was just a bit afraid of stripping it last time - but it is a steel bolt in a steel casting so should be pretty tough) the ride height seems absolutely spot on all the time. I have never in the last few days thought gee, the ride height feels a bit too high now, or a bit too low, previously I often, at different times, felt it was either too high or too low and never quite right...

I know what you mean and in the Activa I often get the sensation it's leaning one way or another and needs levelling and in Gabriel I'm really conscious she's riding a bit high at the front...
Top

Recently the Xantia has only been driving about 1 mile a day to a bus stop - not good for it to drive such short journeys and never warm up properly I know, but not much choice when it's my only car. (Not good for MPG either - with 20 being typical

As of tomorrow the car is in for a bit of a shock!

SWMBO has gone back to work from maternity leave two weeks ago but my mum has been over visiting from NZ and has been looking after 7 month old Joshua during the day for the last 2 weeks. She flies back tomorrow morning so it now falls to his other Gran who lives a few miles away to be baby sitter during the day.

Unfortunately being the only driver in the family I'm the mug that will be driving him over there every day on my way to work.

I did a test run yesterday morning - its 8 miles each way about half that on the motorway half on relatively free flowing main trunking and the rest residential streets. Given the massive motorway upheavals in all directions from our house that have been going on for over a year now (and will last for another year - Richard will know what I'm talking about

) I was surprised that I managed to do this in well under 30 minutes in each direction at peak morning and evening hours, and it was a relatively stress free drive.

After dropping him off I then catch a train into work from his Gran's. The funny thing is the roadworks on the motorway where my old bus goes are so bad, that it takes me less time to drive the 8 miles including some motorway, drop a baby off, wait for and catch a train, than it does to take an "express" bus.

So I'm actually getting home at about the same time or earlier taking the more roundabout route...

8 miles each way x 20 work days a month is 320 miles, which is a lot more mileage than I have been doing - at 20MPG I was filling up about every 250 miles (with still 10 litres in the tank) however I'm hoping that my MPG will go up to about 25 from the longer runs without so much stop/start and cold running engine, so I think I'll manage a months worth out of one tank. We shall see!

The car has now gone from optional to get to work to essential, so hopefully it won't let me down... It does seem to be running very nicely at the moment and I don't want to jinx it.

I don't have any winter tyres but I do at least have nice new Michelin Energies instead of the very old god awful rubber that was on there before, and they got a bit of a test in cold/freezing conditions a week or two ago where we had some -2 mornings and slippery roads and they actually acquitted themselves very well.

I had far more grip in those conditions than I expected from a summer tyre, and an absolutely massive difference to the tyres I had last winter which were terrifying in cold, wet or ice! I was expecting to be slipping and sliding all over the place but apart from a bit of wheel spin when being too eager with the go pedal starting from a standstill on a sharp left bend (which can actually wheel spin even in the dry on the V6

) they were absolutely fine and I didn't really notice any problem. You wouldn't have guessed it was -2 from the way it was driving on these tyres.

I wonder if the high silicate "low energy" tyres like the Michelin Energies are inherently a bit better than the average summer tyre in winter due to softer rubber ? (That and that they're not semi-slick low profile garbage that most cars seem to wear these days, that won't grip on anything other than smooth dry seal)

Of course if winter gets really bad like 2010/2011 I have a spare set of rims that I could chuck some cheap winter/snow tyres on, but hopefully it won't come to that.

So fingers crossed for many trouble free miles of driving this winter!

It's amazing how time goes on Simon... Seems like it was only yesterday you announced the arrival of Joshua

The car will be fine. I used a V6 as a daily driver - before becoming a cycling commuter - for years without issue. They are intrinsically very reliable cars..

The only issues I ever had was a failed coil (carry a spare to be sure) and a massive LHM leak from the tee where the front hydractive electrovalve leakage return joins the main return line. It's a good idea to inspect this regularly and swap it at the merest hint of any perishing on the tee...

And of course keep an eye on coolant levels and the expansion bottle...

Basically, give the car a good once-per-week inspection and all will be lovely!
Top

I will keep my eyes open to see if/when Lidl/Aldi start selling snow chains, if that would be of help? I have used the ones from Lidl before, and they are very good for the price (£20 a set).
Top 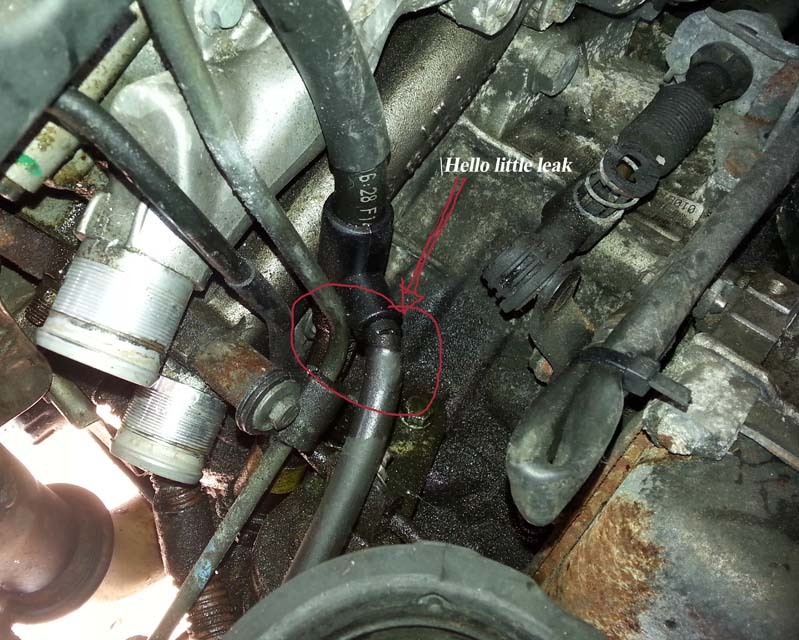 As in the scene from The Matrix . There is a "sound of inevitability" coming your way Simon.
It is that of a Diesel engine for family duties. Cheap road tax and 45mpg.
Top

If you have that failure, and don't have a spare hose to hand, you can make a repair by cutting back the rigid plastic sleeve on that leg of the tee joint, and inside you will find a metal spigot to ttach the broken hose to. There isn't much to hold it on, but I managed to wire it on and it lasted for several years before I found a better hose.
Top

Ah yes, those roadworks.... Note the M74 is closed this weekend as they are demolishing the bridge just N of the services.

It's am impressive job - they're effectively building a 3 layer junction - keeping the original motorway carriageway, but excavating underneath it to make the main road a fly-under, whilst re-building the roundabout as the jam in the sandwich!! Oh, and building a new section of M8 into the bargain!
Top

lexi wrote:As in the scene from The Matrix . There is a "sound of inevitability" coming your way Simon.
It is that of a Diesel engine for family duties. Cheap road tax and 45mpg.

Pay for itself in a year.... I happen to know that Simon is 'allergic' to diesels though

Yes, a diesel makes sense... Even I've gone back to having a diesel for general use and long trips...

Simon, a very nice Xantia HDi is being spoken about on this very forum