Yet another offering from Berwick, this time just off the main street up an alleyway, a hidden gem which you will enjoy if:-


You don't mind the walk up the alleyway, and are not looking for a "window" on the main street to pose at.

You don't mind walking through an Alladdin's cave of mainly guitars hanging from all parts of the musicgallery with customers doing their best "smoke on the water" and other such ditties as they assess their potential purchases.

You don't mind the climb up the stairs to the second floor, following the sound of live music.

You don't mind the odd bit of communal tabling, and musicians playing instruments/singing for your enjoyment.

You don't mind the odd bagatelle board lying about on the table.

And you are not allergic to old bakelite radios of which there must be 30 or 40 around the shelves.

Cafe Kazmiranda may just suit you, we certainly enjoyed it. 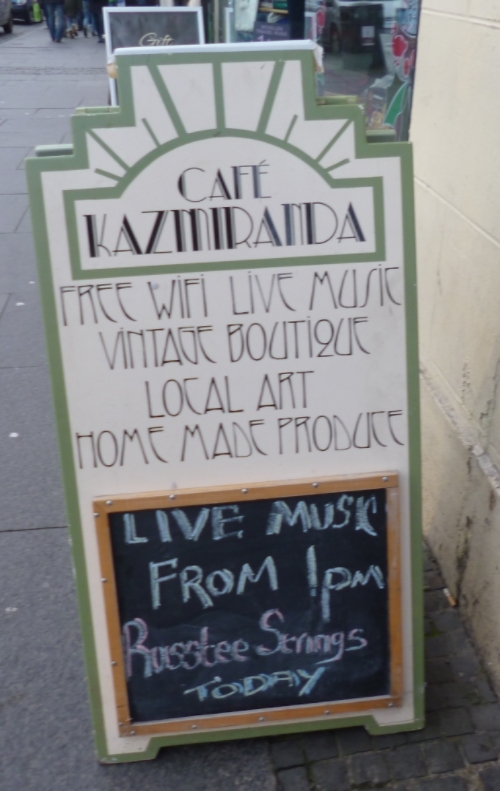 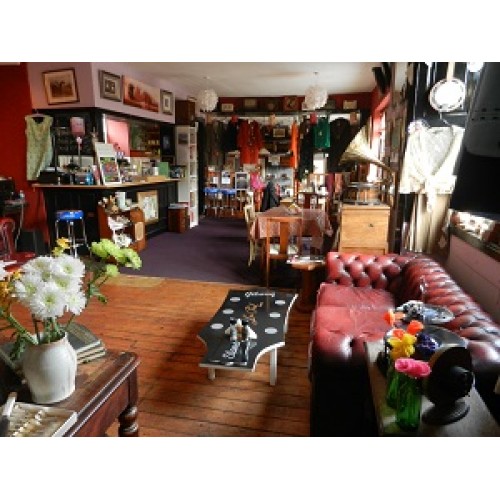 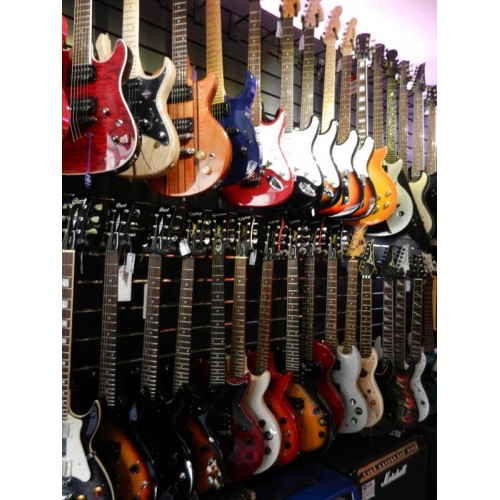 Looks good, way up north though, never ventured up into those uncharted areas (here be dragons etc.).
Top

The lads doing the live music had their own set to follow, but I did think it would be good to have a "live juke box" where the assembled punters could select from the lads' repertoire some particular favourite.

myglaren wrote:Looks good, way up north though, never ventured up into those uncharted areas (here be dragons etc.).

There used to be, until the wild Yorkshire sheep ate them!
Top

Yorkshire sheep don't "handle", they are to heavy with all their required cold weather gear on. They are buggers to turn at speed !
Top

Stickyfinger wrote:Yorkshire sheep don't "handle", they are to heavy with all their required cold weather gear on. They are buggers to turn at speed !

LOL.... Your knowledge of sheep know no bounds Alasdair! Thanks for the giggle. Cheered me up no end lying in bed in a rather poorly state....
Top

Usual thing... A very heavy weekend last weekend and a heavy week have conspired against me as they do... I'll be fine with a bit of serious rest and recuperation. That's basically what today is all about....
Top

Unlikely I know....but if you find yourself in Darlington at a loose end, I can recommend Twenty 2 on Coniscliffe Road (22 I presume). We did a bit of "pub tourism" and had a visit on the back of an article in the "Cheers" magazine.


Excellent Beers from their microbrewery, enthusiatic staff, and they distill their own gin and vodka on the premises in a 50 litre still.

Does that mean it is served in very small glasses?
Top

A lot of "craft beer" outlets do "paddles" with 1/3rd pint glasses to sample the different beers.

One paddle being the legal limit for driving? Is it still two pints?
Top

Jim, not if it was all Old Peculier and Bishops Tipple
Top

CitroJim wrote: One paddle being the legal limit for driving? Is it still two pints?

Quite topical Jim, listening to the radio this morning, there's a Private Member's Bill getting its second reading in the House of Lords today, proposing to bring the limit in England and Wales in line with the lower limit which has been applied in Scotland since 2014, and in many other European Countries.

Its expressed in blood, breath and urine! in the legislation, rather than pints, glasses, or shots.

Currently, the UK is joined by Ireland, Italy, Luxembourg and Switzerland with its higher 80mg limit.

Meanwhile most other European countries — among them France, Germany and the Netherlands — all have the lower 50mg limit while Norway and Sweden have gone even further at 20mg, said to be the closest practical level to zero, allowing for ‘accidental’ alcohol consumption in things like mouthwashes and medicines.

Personally I know I would be hugely "over the limit" with 2 pints of anything, and its sobering reading of the effects on your driving and awareness skills of even very small quantities of alcohol. I think I need to bring my own personal limit back down to zero, from a perception that one pint's alright. Especially if that pint happens to be "Allendale Wolf" 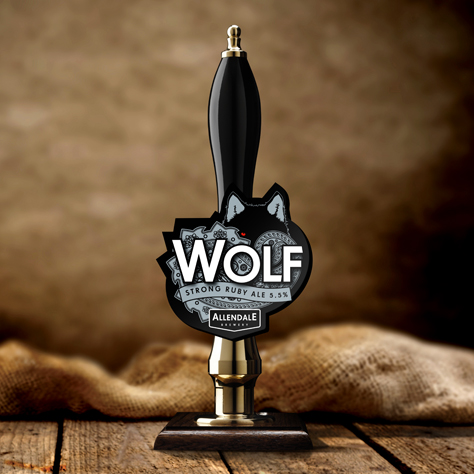 As a Non Drinker (well mostly.....) I know how easy it is not to have a drink if I am driving (as a non drinker I always am

I can also see what 2 pints "only" does and it is not nothing.