I never had an Instamatic, mine was much older, a Kodak with a viewfinder on top under a lid, it took photos about an inch and a quarter square. Can't think what its number was.

spent an hour here this afternoon watching the antics of the brave.

Re: Nice places to stop off at....Brief Encounter.

Nice places to stop off at are particularly nice if they come in the category "Interesting and Free". Add unlikely and surprising to the adjectives and you are on to a winner.

So here's a little place that most M6 travellers through Lancashire will just fly past and never bother stopping off at, other than maybe pulling in at nearby Truckhaven, or Burton in Kendal services in preference...(er...no comparison in my opinion)

Enough of the suspense....It's Carnforth and what has it got.....a very nice Booths Supermarket for lunch, an excellent second-hand bookshop....and a station with an iconic clock, and refereshment room 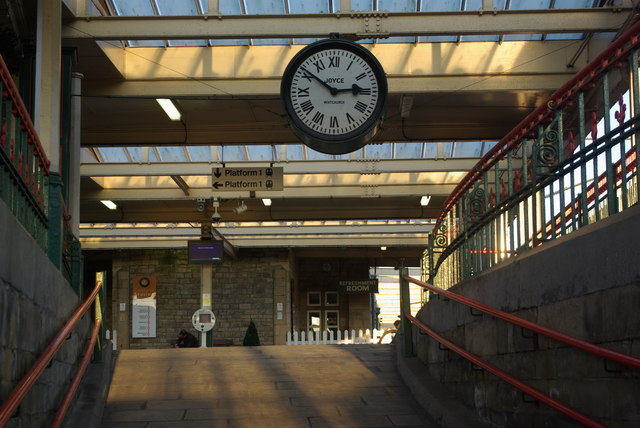 Its all nicely interpreted in the free heritage centre in the station buildings on the platform.

As a keen horologist, I love that clock

The directions to platform 1 seem a bit confused and unsure of themselves...
Top

The home of 'Brief Encounter' Neil.

The pianist who played Rackmaninov to such great effect in the film was Eileen Joyce from Tasmania as it turns out and a brilliant pianist. Yes strange that, the very same surname as the Clock makers...what are the chances of that happening?

...and here's a wiki link to J.B. Joyce and Company originally of Whitchurch Shropshire who do claim to be the oldest clockmaker in the World!

Now I love a bit of British Pathe film, and this brief couple of minutes features Eileen Joyce and does have a bit of old fashioned bicycling, (and tricycling! reminding me of my infancy!)

I was up their in 1955 doing my compulsory TA fortnight at Cark and Cartmel.

We've just been on a little holiday staying at Grange-Over-Sands, exploring that bit of the world. Cartmel is lovely with the racecourse bang in the middle of the village...beautiful setting!

You wonder why they chose Carnforth for the film, but surprisingly it ticked a few boxes for the filmmakers. It is a mainline station as well as having local traffic across to Barrow/ Morecambe etc, and was away from the east coast/major conurbations and possible air raids.

St Andrews in Fife undoubtedly comes into the category of nice places to stop off at and not just because it has a church with a red clock as featured on Pictures of the Day Clock Special!

Researching the "Clock", I came across this site which really goes to town in recording the overlooked but to me fascinating minutiae of St Andrews. Here's some of the elements it covers and each has its own set of images...

Anyone tempted by knockers or manholes

No, but old road signs do... I'm soon to resume my photography of interesting examples I see out on my two-wheeled travels...

How about this one to kick us off?

The location of this one, in the village of Mursley in Bucks is quite a nice place to stop off in its own right...

The pub enjoys a good repulation and the countryside is stunning...

It's also very near a well-known rally site too...
Top

No, but old road signs do... I'm soon to resume my photography of interesting examples I see out on my two-wheeled travels...

and far be it from me to send you on a literal "steeplechase" Jim but this "Red Clock" is well within cycling distance of Newport Pagnell if you fancy a change of scenery!! (edit-just noticed your reply on POTD Jim....looks like you have cycled past it a few times already!)

Looking forward to it; I'll take my camera

CitroJim wrote: ↑
16 Jul 2017, 09:30
I'll be riding to Cranfield later today on the way to somewhere a bit more scenic Neil but your mention of a steeplechase is something I'll be doing very soon over in Cambridgeshire

Looking forward to it; I'll take my camera

I hope that you don't fall off your bike jumping all the hedges and fences, Jim.


I hope that you don't fall off your bike jumping all the hedges and fences, Jim.

Good job I wasn't drinking tea when I read that James!!!!

Otherwise my keyboard would be very wet

Lets start off with a holiday snap....

I rather liked the pattern on these little "sets" which paved the little lanes in Culross, Fife, Bonnie Scotland. The picture should assist if I get the urge to copy it.

Culross is in a bit of Scotland which most visitors in general pass by. It's on the North side of the Firth of Forth inbetween the Forth Bridges and the Kincardine Bridge. It has a rather nice view of the Grangemouth Oil Refinery over the other side of the water. It gets more visitors than it used to, although in itself it is a nice little place, because it now appears as a location in "Outlander" a TV Programme. 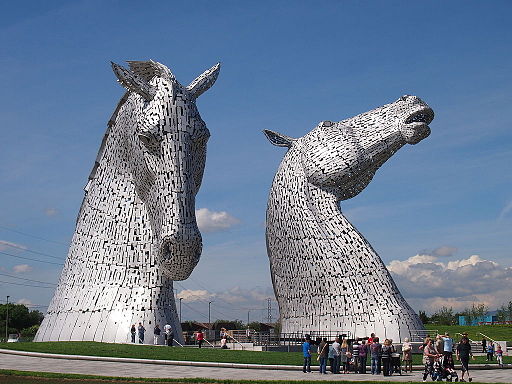 The Kelpies, at The Helix, Scotland [CC BY-SA 4.0 (http://creativecommons.org/licenses/by-sa/4.0)], by Beninjam200 (Own work), from Wikimedia Commons

...and then there is a little gem if you like railways at the Bo'ness and Kinneil Railway. Yes, it's nice to stand next to a class 37 in blue humming and droning away next to you in the drizzle, but it also has a second hand "book shop" in a couple of carriages. Just the sort I like. Piled high in a haphazard way with all manner of books, magazines, pamphlets and cheap too! 10 mags for a £1 etc. There was an interesting little book from a car hire firm from Lothian Road in Edinburgh with pictures and descriptions of their chaufferred tours in the twenties at £3....fascinating!

Onwards and nice views of the 3 Bridges from the road heading towards Queensferry. The new one is due to open on August 30th 2017.

You're seeing some cracking stuff on your holiday Neil...

Hope to get some good snaps during my New Forest holiday next week...
Top
Messages: 371