I can't help you with Mirascripts as I have never needed them as they only work with the Magneti Marelli RT units (I have the NG4).

But on Diagbox under the Customer Options, for an RT6 unit, there is an option in English:

"Type Of Steering Wheel Controls". On the RT6 this should be set to 'Condition 2'. So remember what setting is there already in case it isn't correct and then try this value.
Top

I changed it, and everything is fine now.
Thanks for share you konwledge.
Top

Great - thanks for the update.
Top

This was much simpler than the previous job (but chronologically this was the first to be done), because the only things that had to be done is just to replace the nav units and the screens, the wiring stayed the same, no additional components or parts were necessary.

The emyway (RT6) unit and the matching screen (DG4), because it won't work with the RNEG/RT4 screen: 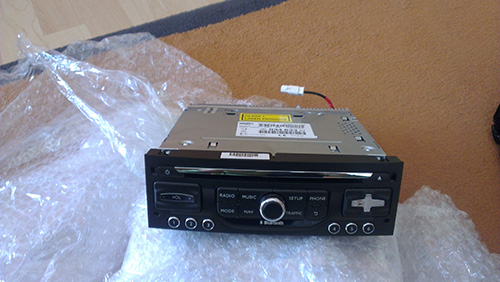 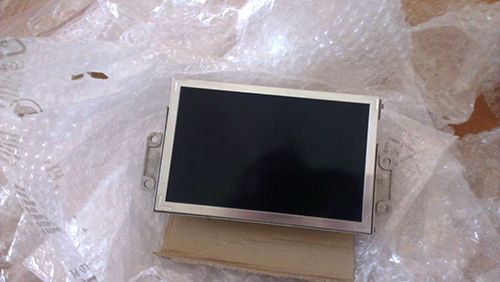 The installation phase is shown below: 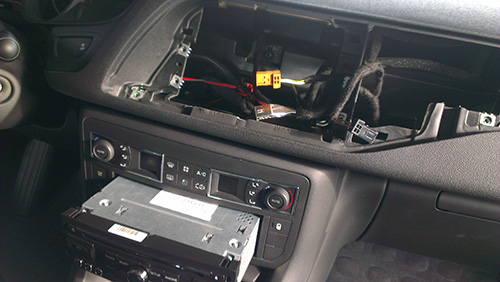 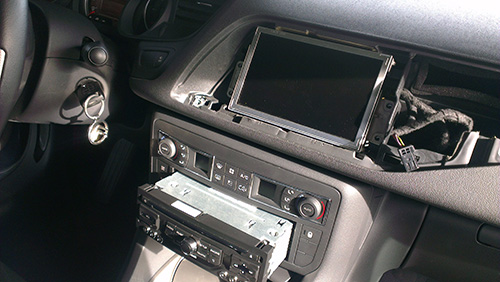 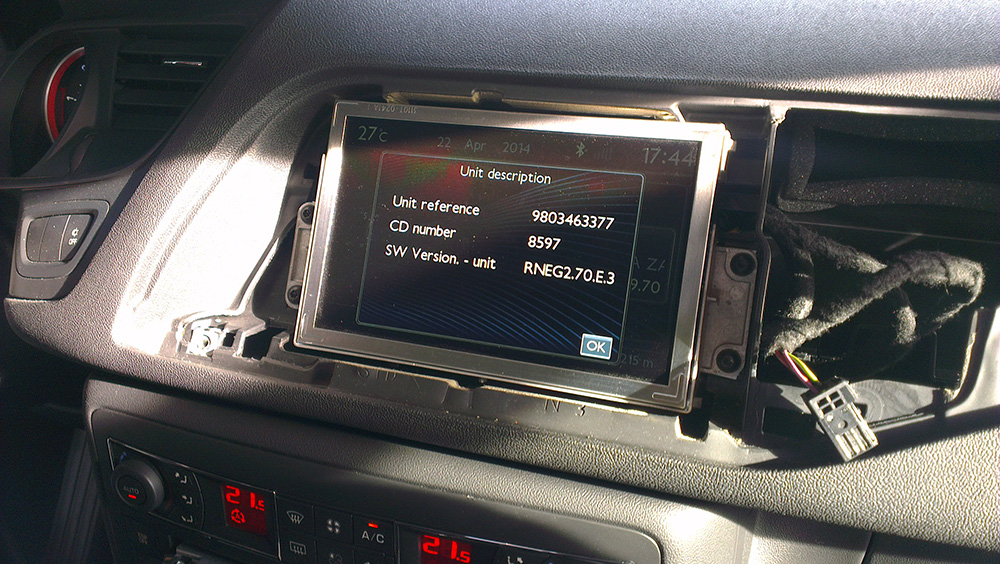 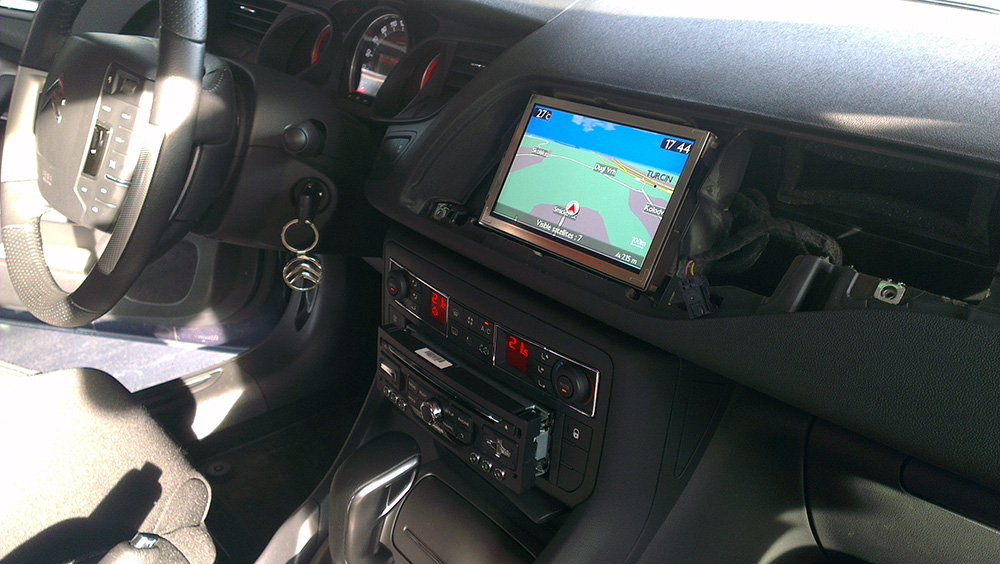 Here's where it gets interesting, after putting the plastic cover back on: 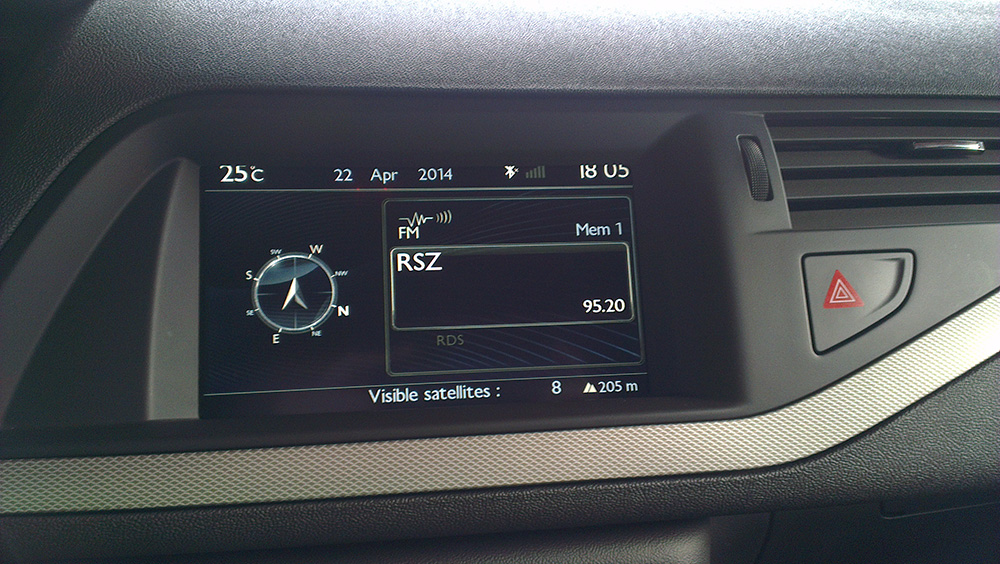 The cover "cuts" the screen on the top. I was surprised to find out that the new screen is slightly taller than the old one (2,5 mm approx), and until today I had the old cover in place, with the new cover being ordered from Citroen. The interesting thing is, we ordered per VIN number by their display car which has emyway installed from the manufacturer, and last week the exact plastic cover that I have arrived ... how, what, why ... no one is really sure, the part number was matching the Service Documentation ... anyways, the order was disputed to the Citroen (Croatia and then back to France), and the new, required cover with the bigger screen hole should arrive in a few hours. Who knew such unexpected problems would happen.

Now, one of the yet unresolved problems is with the wheel screen, it won't display the navigation data, it just displays zone not mapped (remember the previous post, where that means that really the zone is not mapped, in this case, it means no data is being transferred from the nav unit to the instrument panel) ... Everything was done as it should've been, I went through DiagBox three times over, nothing ... went to the Citroen Service, and asked them to do the BSI update, supposedly it could help, but, no, it didn't ... the only software thing that can be done is to try and update the instrument panel (if possible) ... luckily I can do without the navigation information on the small screen (it can be turned off in DiagBox to not be displayed while rotating the display modes), but since I'm looking for a 100% solution, I haven't given up on this yet.

Although I've said in the beginning that no additional parts were required, I went for the genuine USB cable and the USB/Aux connector in the glovebox. Without that, you can't do map/speedcam updates, or obviously, play USB/iPod music. The firmware updates are done via CD, like on the RNEG i.e.

Was it worth it (not looking into finances, but even that is not that expensive, since I've managed to sell the old one)? I'd say yes, the emyway displays track names and folders from the USB stick, Bluetooth music streaming works (but just the phone name is displayed, no music info), the maps are more fluid in animation, the interface is more to my liking, the speed limits are displayed where available ... the thing that hasn't changed from the previous configuration is that the phone signal (visual representation) still gets lost when you go into roaming (which I occasionally do), and until you reconnect the phone, it will be displayed as no signal ... but when you get used to it, you know how it works ...

The RT6 has an active cooling (fan), which makes some noise compared to the RNEG, but that isn't bothering me, at least I know it will be slightly cooler than the previous unit (which would heat the lower compartment a lot after 2+ hours of drive ...). I've tried using the USB with the USB HDD (2.5", single cable, FAT32), but the emyway refuses to see it (the HDD works, because it gets electricity from the USB connector), but no interaction with the nav unit ... regular USB sticks seem to work just fine. 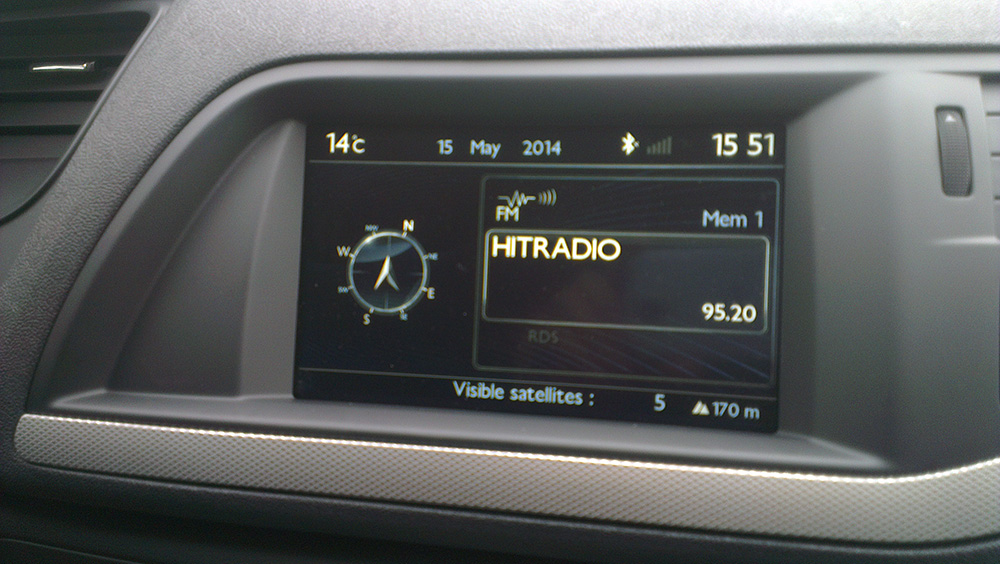 The currently unsolved situation with the "Zone not mapped", happens because somewhere along the line of communication the instrument panel doesn't know how to display what the emyway is sending, if it is sending anything ... 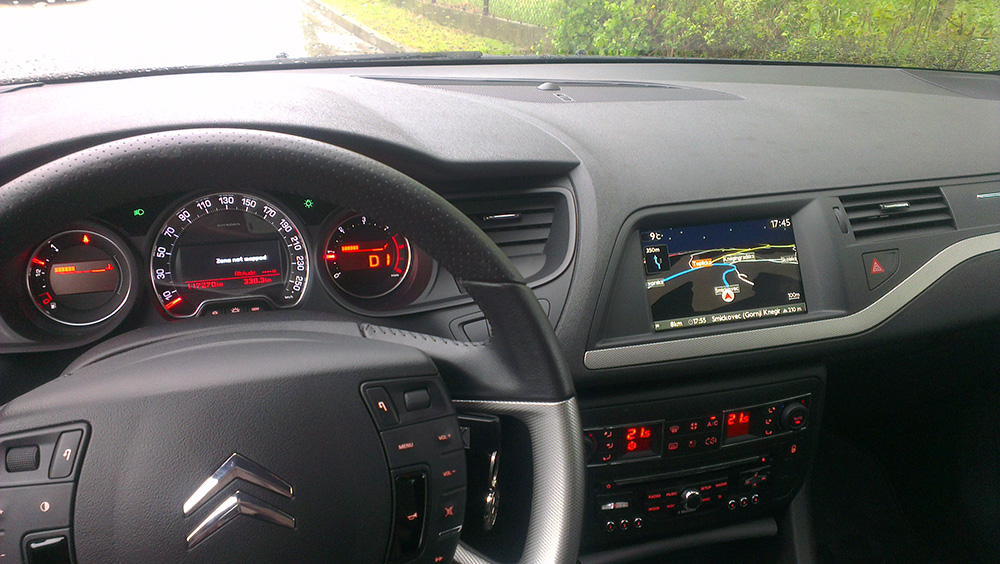 IMPORTANT EDIT: It took me almost a year, but I've finally resolved the "Zone not mapped" mystery ... the said error was driving me nuts, and with the help of Mira (yep, the guy who's behind MiraScripts, those of you who know about that), I've located the one single parameter that was wrongly set on my device (since I've obtained it obviously), so now I have a fully working instrument panel matrix navigation display once again.

The parameter is 1.9.146. and it can be within 0-4 range, the setting that worked for me was 3 (2 was almost working, with no street names displayed). How that looks like is visible below: 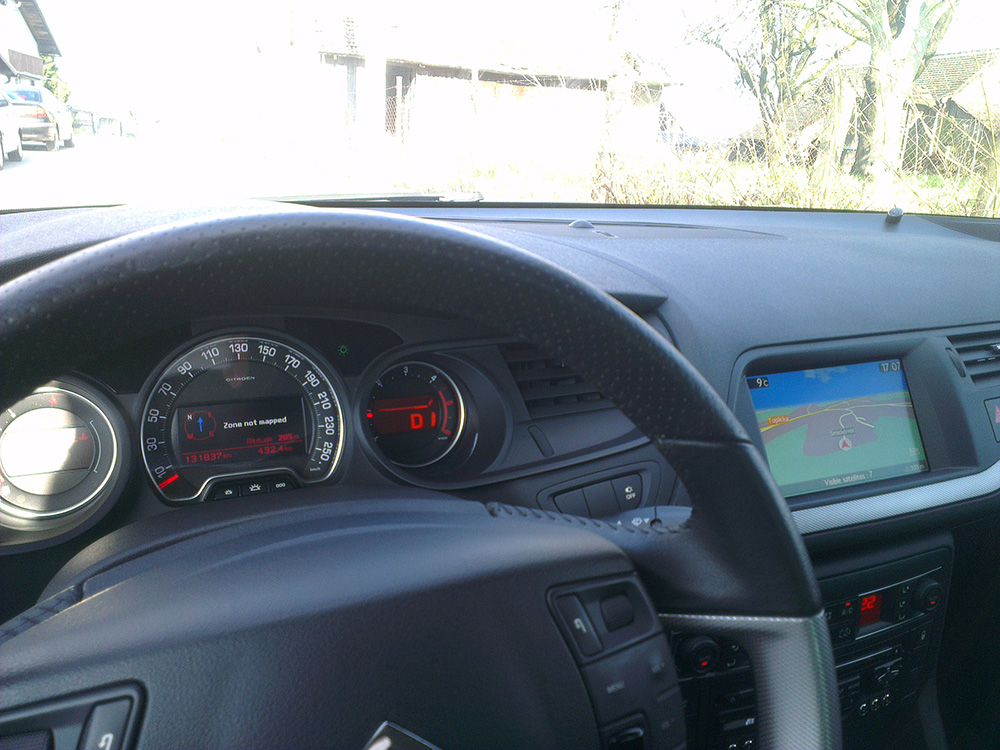 You can compare the previous image, on it there is no compass visible, and no altitude shown (hence, no data get's transferred from the RT6 unit to the matrix display) 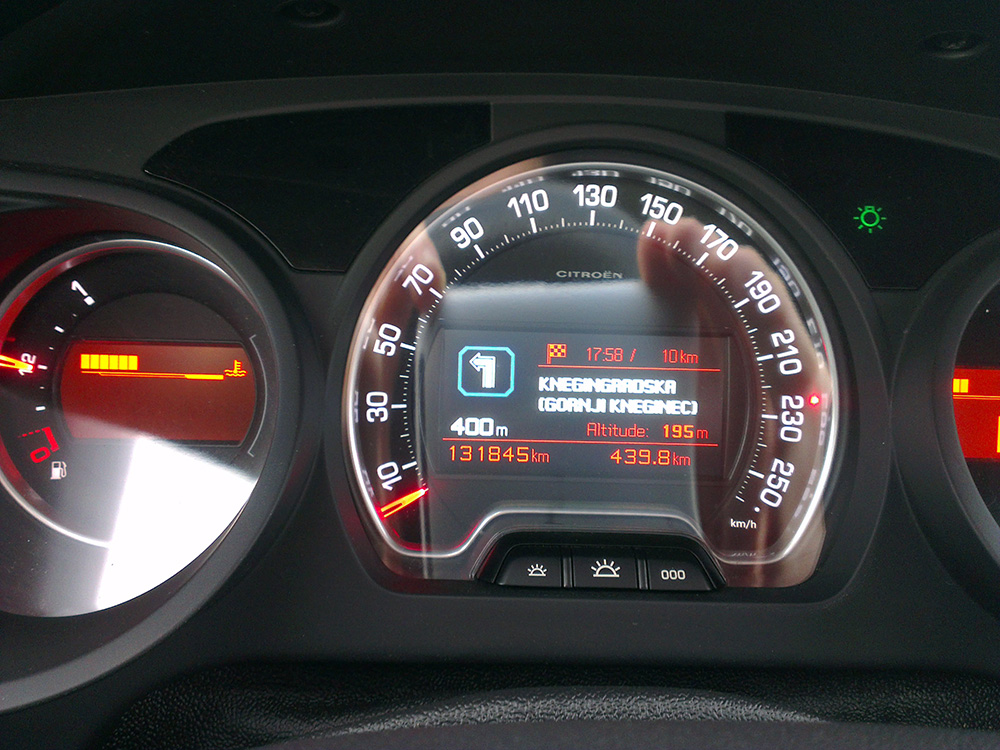 Here everything is 100% fully working (as fresh from the factory)

hello my friend.
days of searching, tons of sweat and tears fell down i see THE first person on the whole Internet with the same problem like i have. it is the matrix screen navigation miserable failure (zone not mapped). since you seem very happy with mirascripting and i am a kinda newbie (but i get diagbox well, though) in that field i have a very HUMBLE plead to you. could you please elaborate like for a total amatour on your managing with this problem (step by step)? i would greatly appreciate your willingess to help. greetings from Poland
Top

Vanja is no longer a member of the forum.
Top

what a pity... i wonder if anyone could help me.

mess is such big that it ALL WAS present till my battery died a week ago. i've lost languages maps and everything connected with visual comfort. plus road lights/day run went disco. i've managed to bring back to life almost all on my own (diagbox plus mirascript) but this little fella (internal matrix panel) drives me crazy.

Hi i update maps on my c5 x7 to newest but can you tell me when i use navigation why os picture on screen always like picture on attachment. No streets and other things. Sistem is rt6 and software is rneg 2.80.e.2. Navigation show map of europe an that's it. How to solve this. Navigation is working good but on full screen show only that, with my position. Thanks.

What system do you have? MyWay (RNEG), eMyWay (RT6) or Navidrive 3D?
Top

Seems to me you're in Zoom mode. That's why you have that horizontal and vertical line with your position in the middle.
Use the central knob to get out of Zoom mode and revert back to normal map layout.
Unfortunatelly, I don't own a C% X7 or an RT6 to provide you a step-bu-step guide to theis...
Top

Somehow I missed that!

It's called Map View. Just press the MODE button in succession to get back into full screen mode.
Top

Need to try. but i think its not zoom mode. When i navigate sistem don't show that vertical and horizontal line and map is still on europe. Navigation seen on small window on top left corner.
Top

Anytime you have the 'Cross Hairs' you are in 'Map Mode'. This is for moving vertically and horizontally across the map to get guidance to a specific location for example.

The other view (middle picture) is for split screen to show other functions whilst navigating, like the radio in your picture.

Do you have a manual for your car? If not I can provide you with one, let me know.
Top

Yes i have manual.
Top

I solve the problem. Thanks man!
Top
Messages: 514