I'm guessing that's intentional, to prevent simpler (cheaper) exchange ... much like on the previous C5's you needed to replace the entire top dash if you wanted a color navigation screen + related nav unit ...

First read that popped up:

It seems if the unit is in the Peugeots (or, if you'd telecode it with Peugeot Planet), you'd be able to activate the trip page ... I'll try to re-check the documentation I have, I know I've seen that feature somewhere, but like I said, I never bothered with it myself, so can't remember the small details
Top

Ahh that's funky that's it's only a Peugeot thing.

Wonder what would happen if an rneg2 unit was plugged into an rneg screen as while the resolution may be slightly off I wonder if the connectors and comms between them stayed the same or if the cable arrangement was changed at all..
Top

Don't know, didn't want to experiment with that, to avoid any possible damage to both the nav units and the screens ... I'd say it wouldn't work (no image at all), since the resolutions are different ... or, you'd get the image cut off, approx. 0,5 cm in the height department
Top

I'll try and test one active FM amplifier in my car (as soon as I get it delivered), I've noticed my radio quality reception is poor ever since I did the RNEG -> RT6 switch, so I'll see how it goes with that (I'm aware of the potential setbacks in sound quality) ... I don't expect much, tbh, but at least I'll test it out and know for future reference
Top

vborovic wrote: It seems if the unit is in the Peugeots (or, if you'd telecode it with Peugeot Planet), you'd be able to activate the trip page

There's a load of hidden options if you press setup then press 1+2+3 together. I didn't look into them too much, just used it to do a reset to get the satnav working.

The trip page doesn't seem much use though since it appears there is no way to operate it on the C5. It does get a one off (two word) mention in the handbook but you have to be really paying attention to find it. It's also a bit redundant since you can get the same info in the dash display.

I think I need to enable the location output to the centre dash display (it's showing not mapped) as well so I'll be having a play with those options and if not getting hold of a decent Lexia.
Last edited by Homer on 23 Apr 2015, 14:21, edited 1 time in total.
Top

True, but in that menu there is not that much that can actually be changed (with actually knowing what you're doing)
Top

One interesting detail, which I'm not sure it was discussed/mentioned before, with the RT6 (eMayWay) navigation unit (but I'd say the same behavior is on all the other nav/radio units that have BT phone connectivity): Dual SIM phones, Android based (but I'd imagine iOS, Windows and any other would function the same way) ...

... you can't pick which SIM card will be used for outgoing calls (of course, when you're placing the call not with the phone, but through the radio/wheel buttons) ... the incoming calls come just fine (although it would be nice to see which SIM received it), but the outgoing solution (if you don't want to use the default SIM) is to have the phone in your hand, and place the call (selecting the SIM), which will then be directed to the car's mic/speakers ... any thoughts on this?

It's not the end of the world, but in case one SIM is private, the other is business, I would very much like to have the calls separate, even in the car (at least to have the integrated ability to do so)
Top

I think most if not all car systems are the same as most phones are single sim only, especially iOS

I haven´t noticed that dual sim problem with my aftermarket Kenwood -radio. I´ve got default sim selected for all calls (using other sim just for data), so maybe that´s causing this. Maybe vborobic should try that? And if I´ve understood correctly, you can even select default sim for a single contact if you like (works on Android 4.4.4 at least).
Top

Well, that's just that, the default sim works, but I'd like to select the 2nd sim for some contacts (on the go) ... I must admit I haven't had the time to dig around and see whether the feature regarding default contact's sim card source, but even then, what happens when you want to directly dial a number through the car, you don't get the sim select ... you're again left to make that choice directly on the phone ... and while receiving the calls, it would be nice if the RT6 would show you which sim was the recepient
Top

You can bind a contact with sim1 or sim2 through phonebook. And if you select a default sim to use with all calls (is used with all calls that are not made with contact bind with other sim), then you only have to dial through phone if you want to directly dial and use that "non-default" -sim. I think you wouldn´t need to do that very often.

Btw. Jiayu S3 and Kenwood KDC-BT92SD work together rather nice here. Even spotify-streaming works and I can change track using steering wheel buttons.

Can't find the possibility to bind a contact to a sim (although I've read on other places that it is actually possible), probably due to having stock ROM (HTC based) ... will get to it some day, not in a hurry at this time ... in the mean time, I'll let you all play a little guessing game with the photo below ... why did I do that? (curiosity is not the correct answer btw): 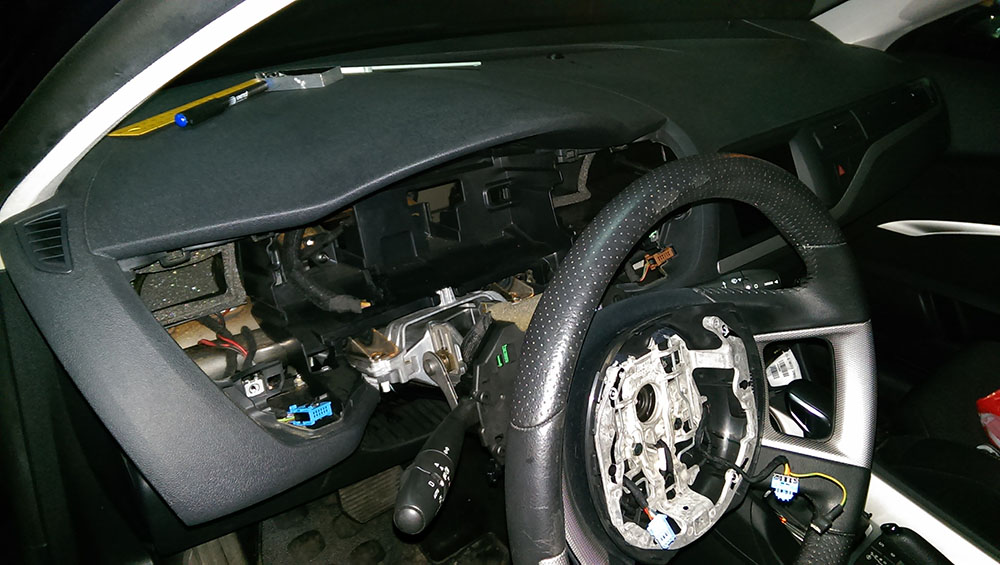