Ok, so with the C5 driveshafts sorted and the trailer fixed, this was next in line for the ramp.

a year since the last serious work I did on it

For the MOT, it needs;
- CV gaitor
- ANOTHER ABS sensor

It also now needs a rear tyre I think. Noticed one of the Michelin's has cracked up badly around the tread line

So, battery back in a couple of weekends ago and run it up with the intention of loading it on the trailer and taking over to the barn. :facepalm: I'd forgotten that it was running on 3 cylinders.

Left it in in disgrace and thought I'd try to use the Lexia last weekend to work out what was going on.
Plugged it all in, arsed about and... it just won't talk to the car at all - doesn't recognise any ECU's

This may well be something I haven't set up right, or it might be the car (hopefully the former, although this one has always steadfastly refused to talk to any after market diagnostic kit). EDIT: Since then I've finished the install of all the Lexia updates so fingers crossed that might sort it.

So old skool diagnostics then... 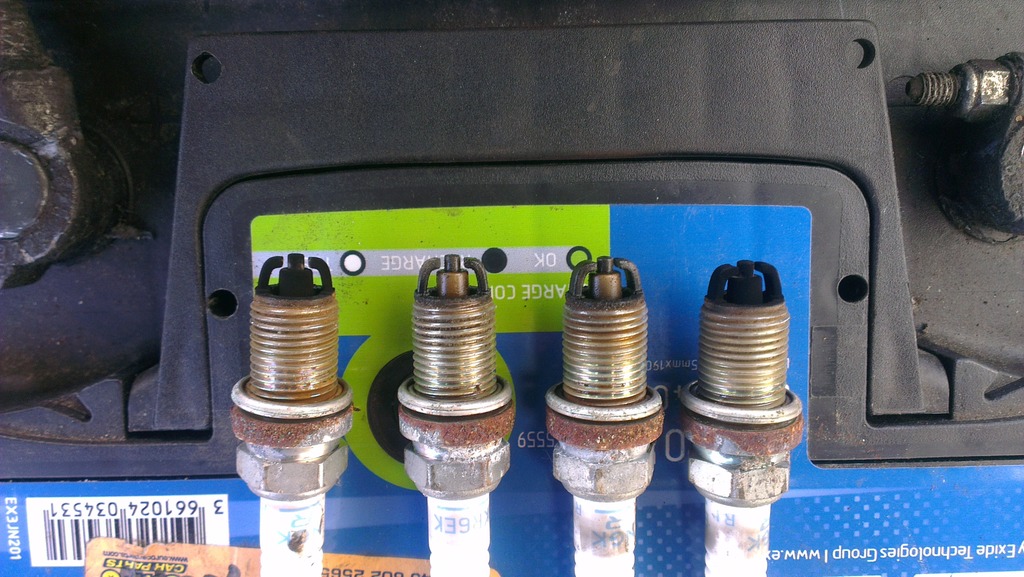 Actually running on 2 cylinders, not 3, then

(the middle 2 were soaked in fuel, I assume the outer 2 are sooty black because it's running so rich trying to compensate and keep the engine running)
Cleaned them up and refitted; 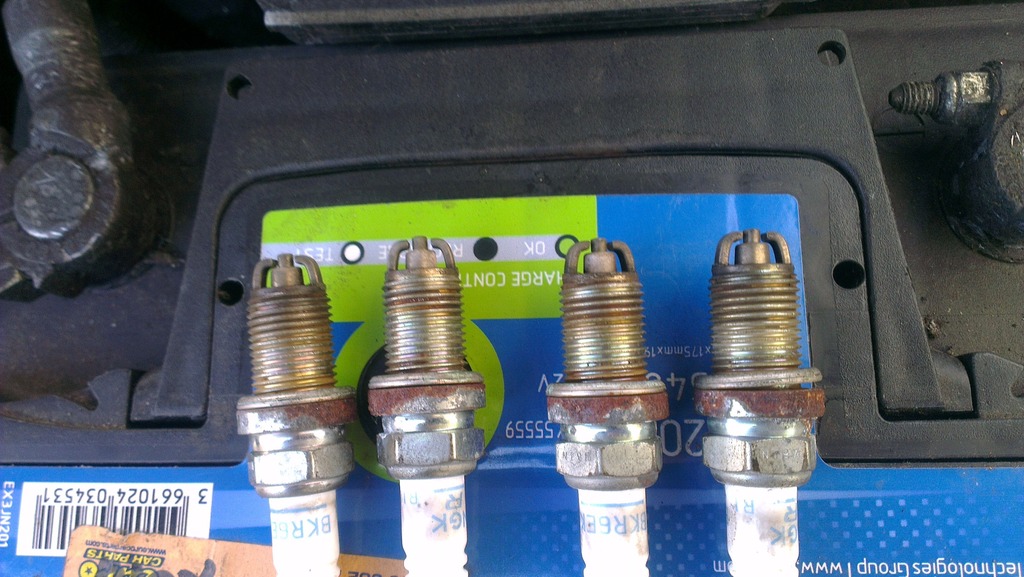 From memory (not rechecked yet) it's a 'lost spark' type ignition, so it's a simple twin coil pack with the centre plugs running off one coil and the outer plugs running off another. So hopefully it just needs a new coil to sort this.

Also, hopefully that will also explain why I thought it was 'hesitant' and 'bogged down' a bit when putting my foot down when the car was last on the road (it was running on all 4 then, but felt like the timing was wrong). My hypothesis is that the coil would have been on the way out, causing that problem.

Malcolm Lockwood to the rescue with the required bits 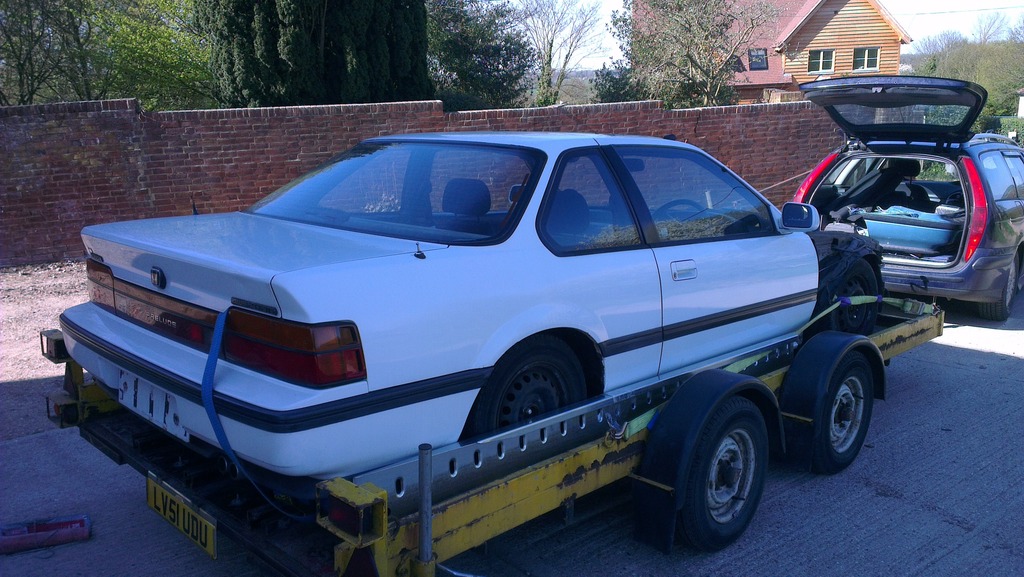 Ok, found some time in evenings (now it's brightened up a bit) to get on and swap the coil.
It's not an easy fix

Not just because one of the coil bolts was corroded solid into the head, but because... Changing the coil didn't fix it

Gosh, I know what a game the coil is

So belling out from the LT side of the coil, all seemed ok. The Ignition Coil Capacitor is potentially u/s (difficult things to test without a capacitance meter, but on a resistance checking multimeter you can normally see them charging up and this was doing nothing) but that's a minor issue and I can follow that up later.

It did show up a couple of poor looking connections at the Ignition Module; 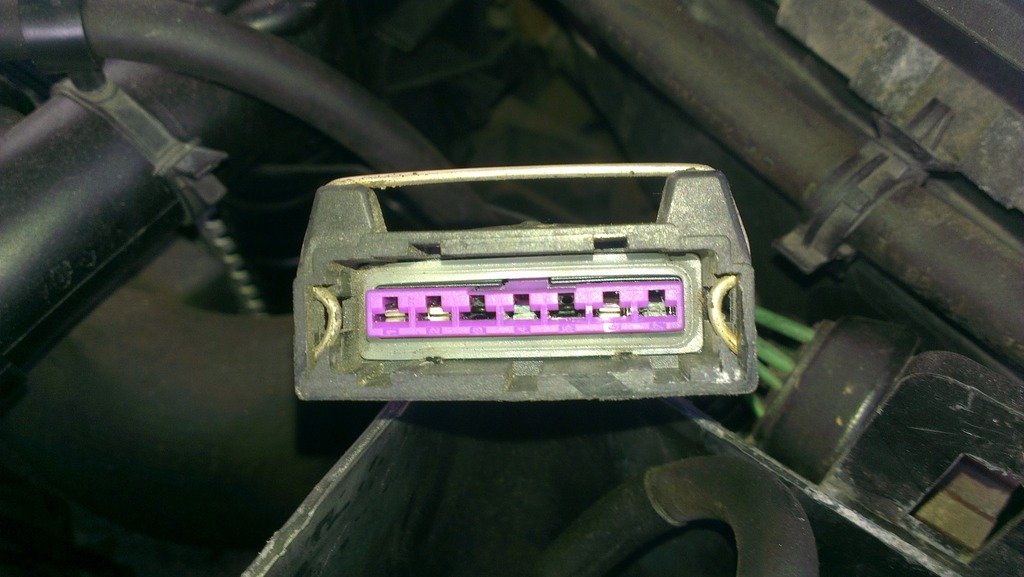 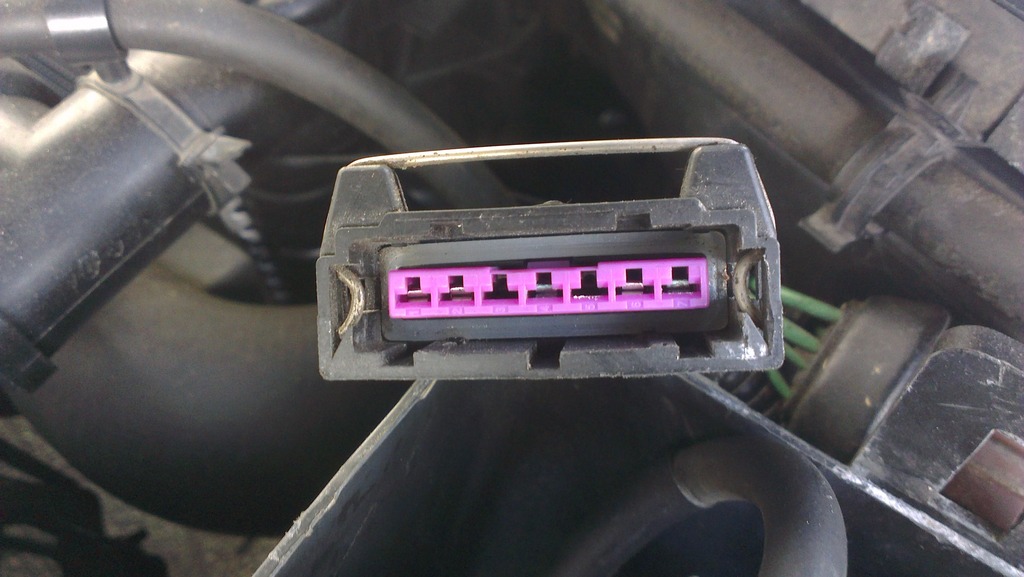 Haven't photographed great, but there is verdigris on pins 4 and 7. Didn't seem to affect the resistance readings but I cleaned them up with electro clean spray and scraping at them with a watch makers screwdriver.

So next up was belling out the remaining pins from the Ignition Module connector. Again, all were fine. Spotted a split in the connector to the Fuel Injection Relay which isn't great, but isn't causing a problem and the relay is well protected inside the ECU box; 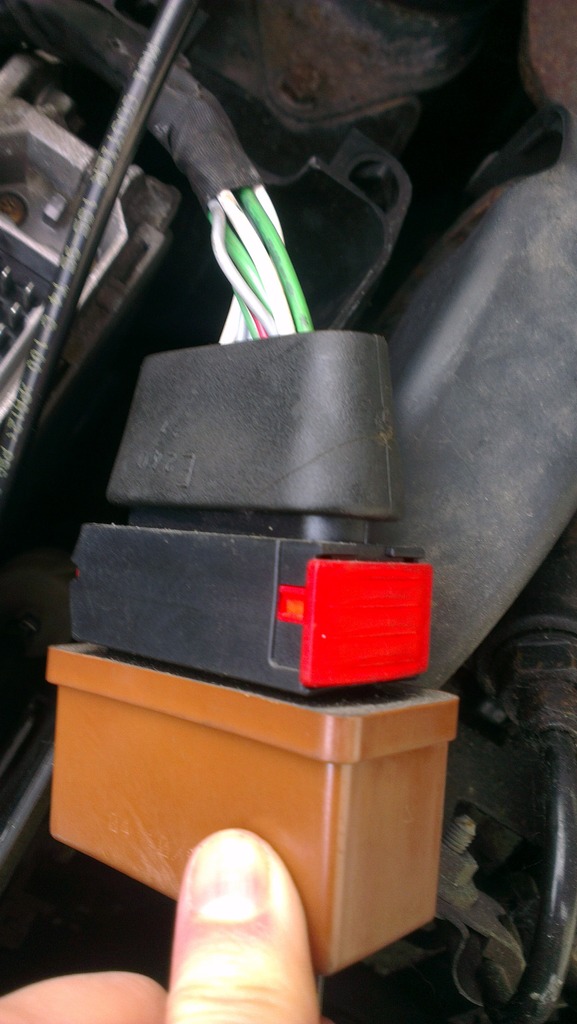 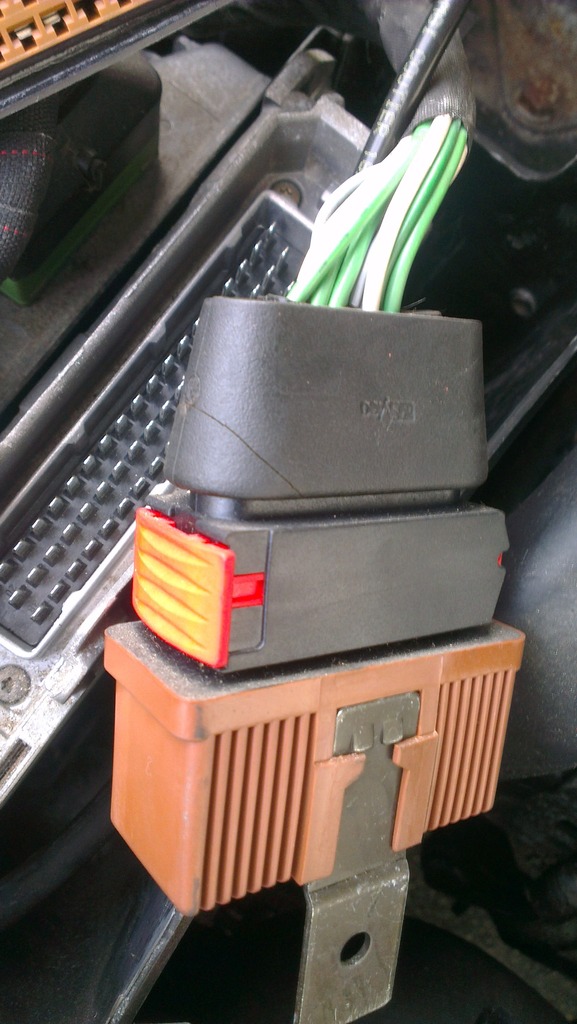 I don't have the internal circuit for the Ignition Module so testing it was a bit of guess work, but seemed a pretty safe assumption that the 2 inputs from the ECU were the firing signals for each of the 2 coils. Pin 4 is earth, so resistance checking between pin 2 and 4 and then 7 and 4, should give the same...
4 and 2 was about 2.6k Ohm, 4 and 7 was over 30k Ohm

Didn't sound right...
So I whipped it off for a closer look, on the basis it was going to be knackered and I'd need to change it anyway; 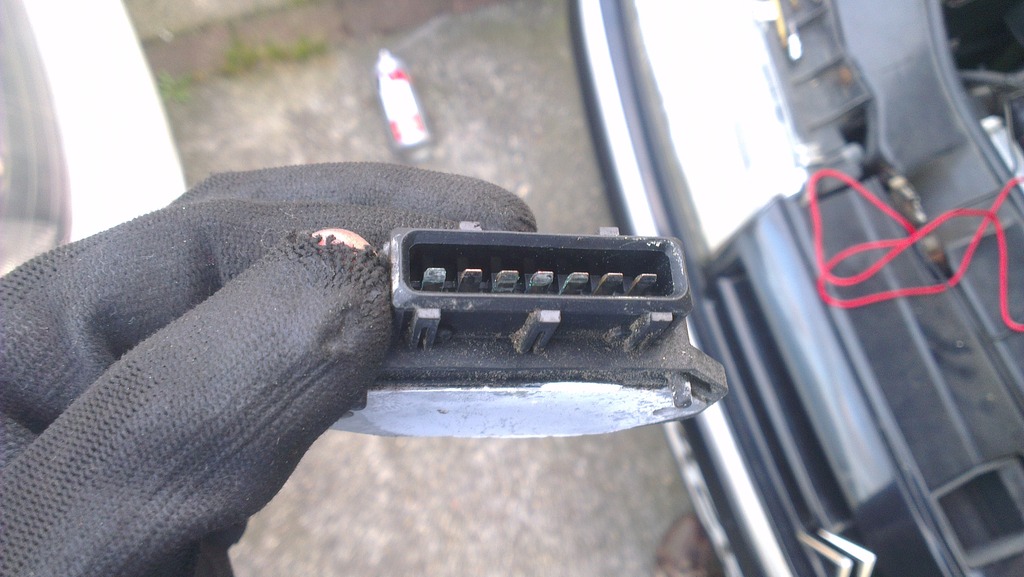 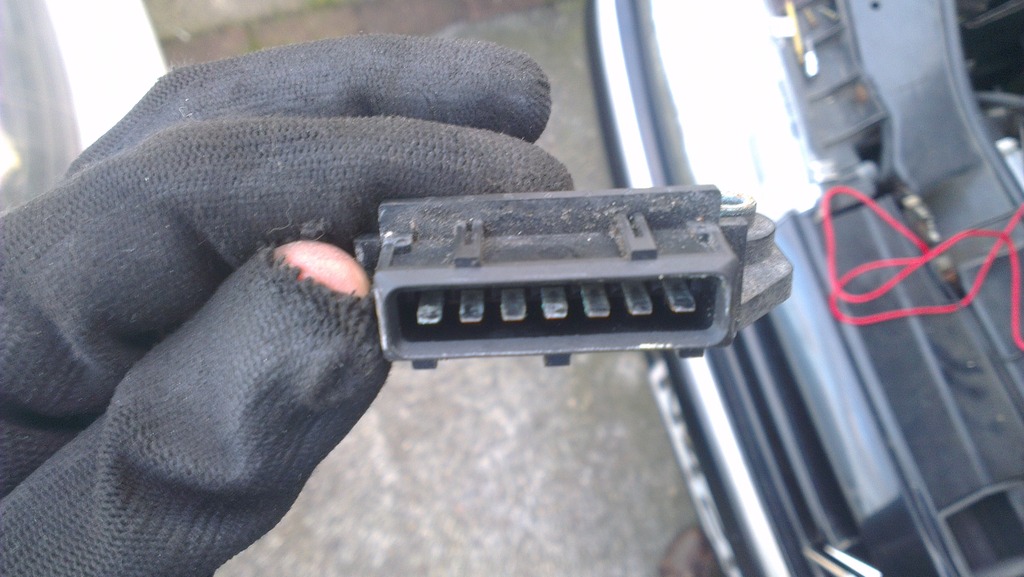 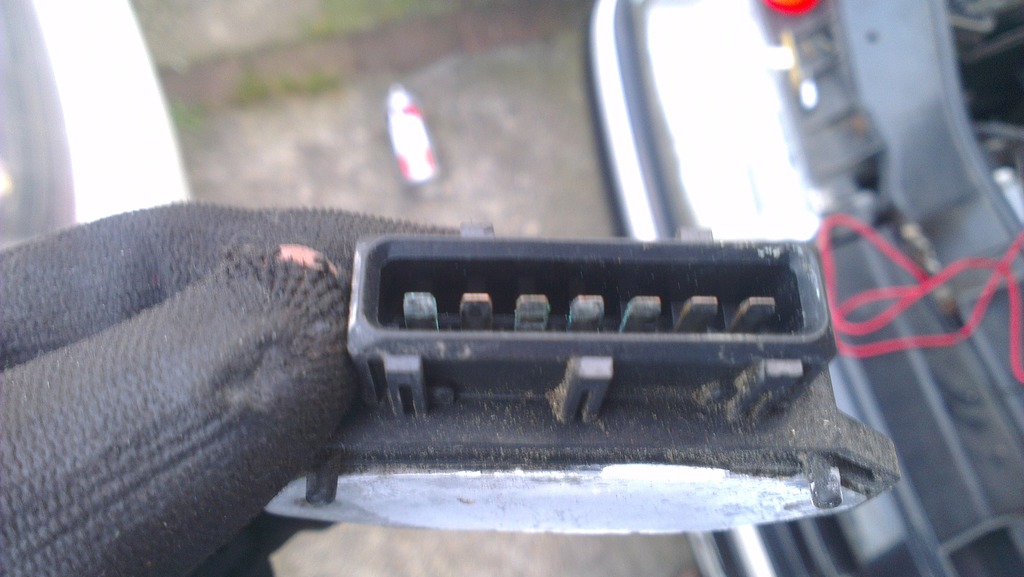 Connections were pretty dull looking. I'd already given them a good spray over with electro clean but obviously not achieved much. Scratching away at pin 7 with the multimeter caused the resistance to drop to 2.6k Ohm (same as the other side)

Gave all the pins a good scratch over with the screw driver to clean them up. Looks like they have some kind of electro plate coating on them, which has badly tarnished. It wouldn't clean up, so I scratched it off. 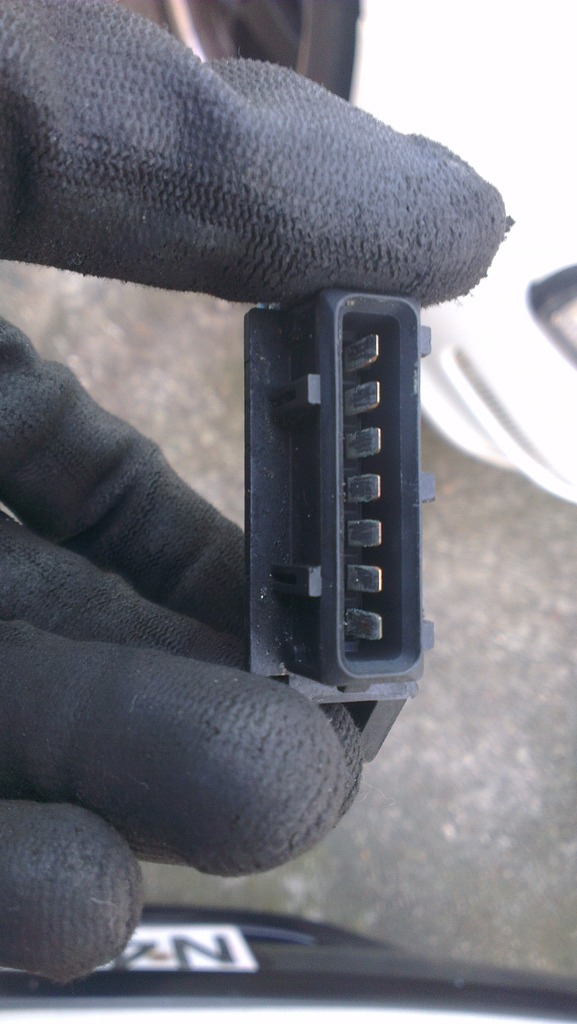 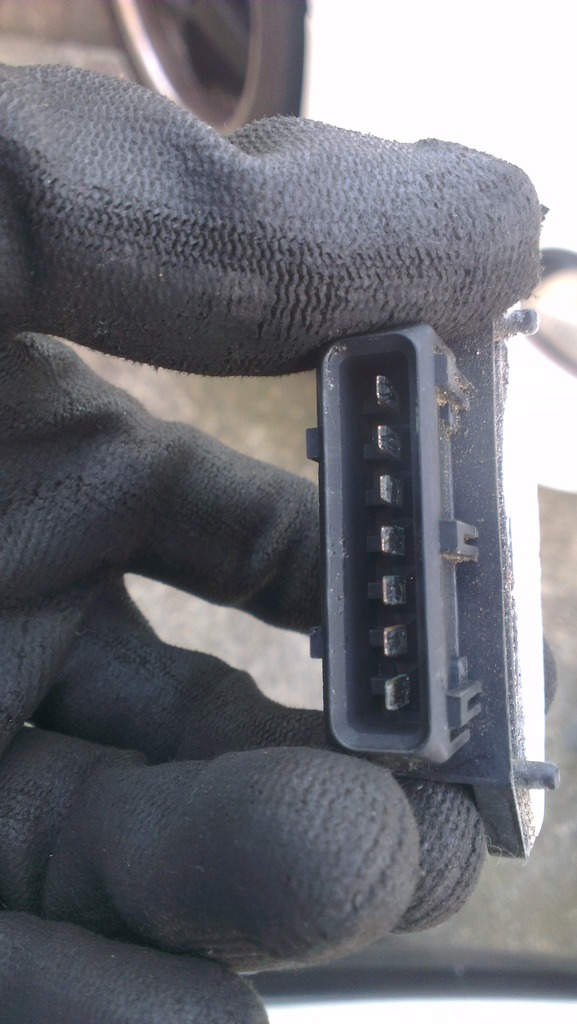 Plugged everything back in...

Sweetest it's ever run that I can remember

It did start occasionally misfiring when it was revved up (something it's done for a long time before finally crapping out onto 2 cylinders) so I don't think it's a long term fix with the pins and I'll have to replace the module.

It makes sense really - that's the side of the rad that was leaking (steam) when hot, so it's probably made its way into the connector and tarnished the pins.

Eurocarparts do a new module for around £35. It's not an OEM Bosch one though, so I'll have a dig around to see if what price they are before making my mind up which one to buy. 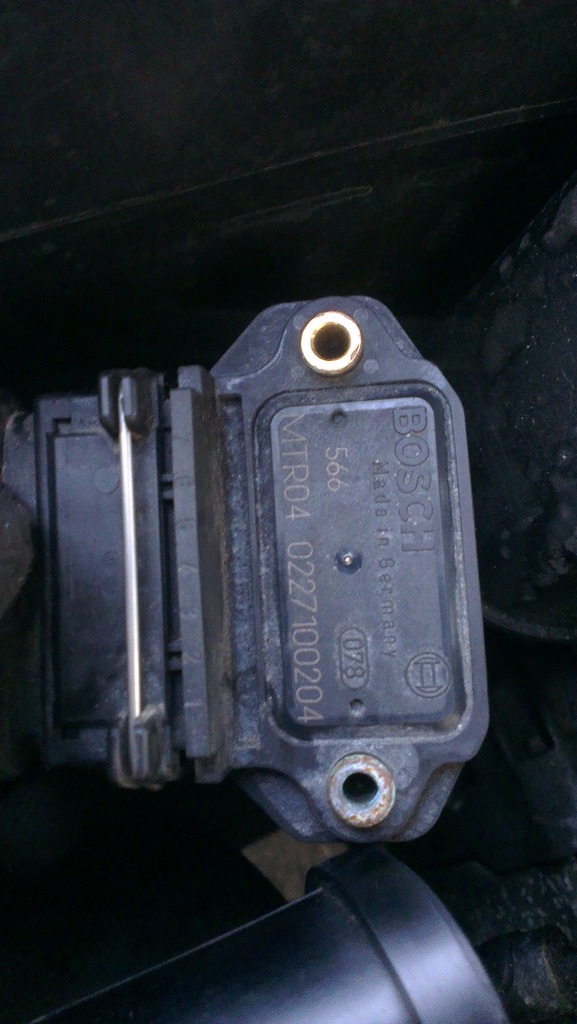 According to Bosch, the equivalent part number now is 0227100200 (not sure if the link below will work directly, but that's after searching on bosch automotive website)

The equivalent part is fitted to all manner of other manufacturers vehicles, so hopefully should be easy enough to pick up at a decent price

Excellent news the problem is found and resolved Iain

Boxing day afternoon gave me an opportunity to get on with this again.

New bolts to fix the new coil with; 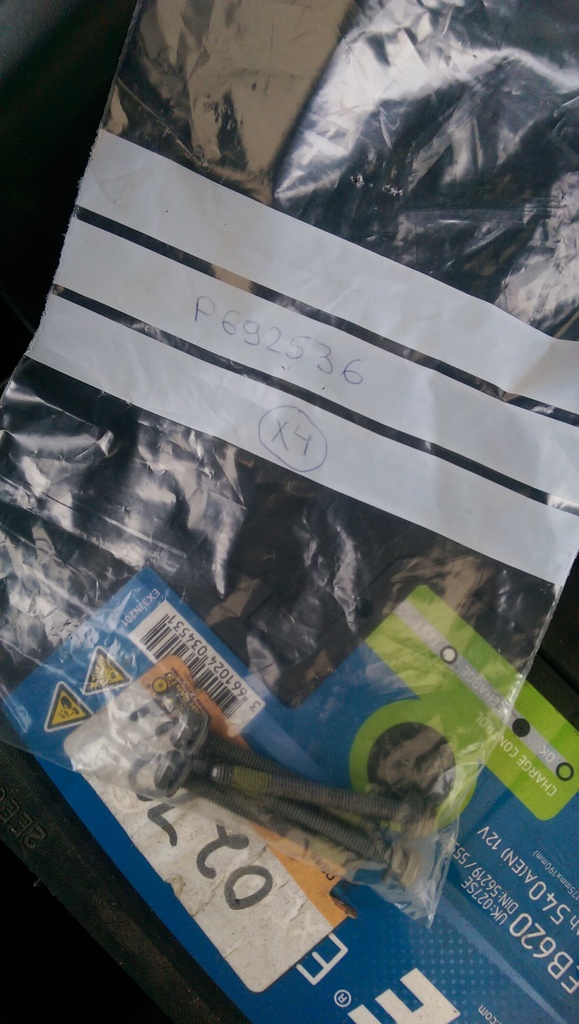 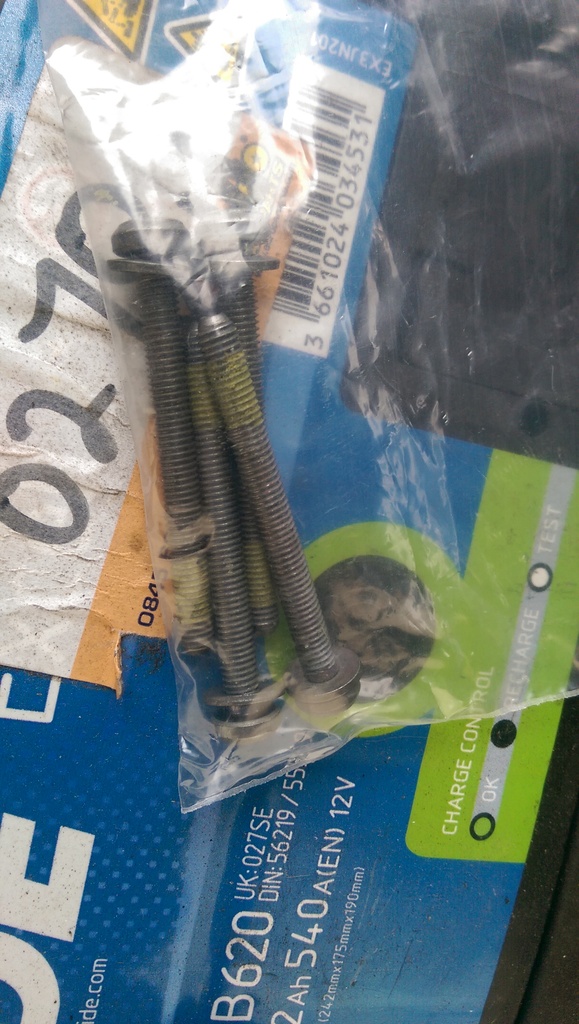 *most inaccessible bolts ever*

I forgot to take a pic before I refitted the intake, but there it as, all back in place; 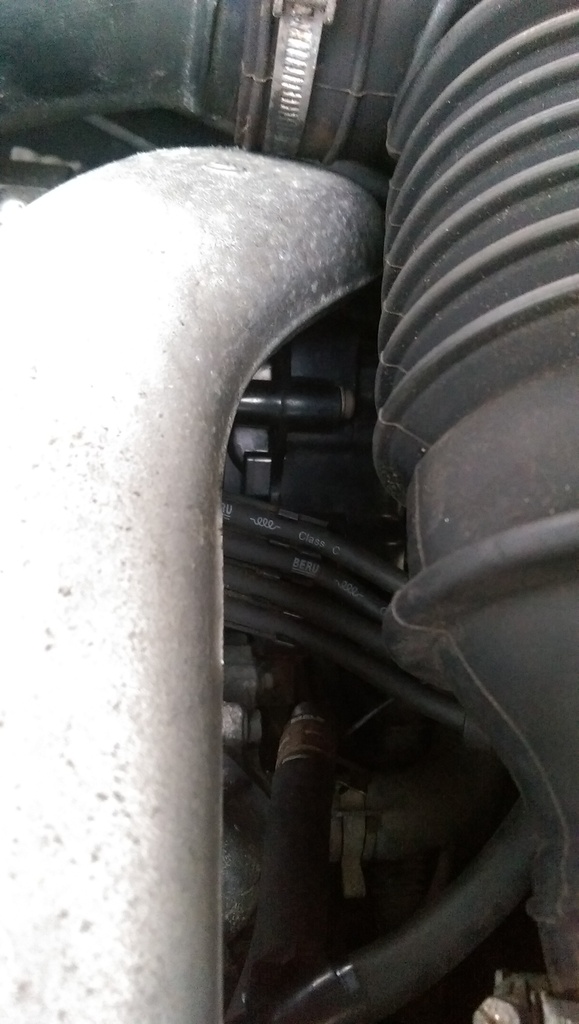 Next up was the ignition module. New (top) Old (bottom); 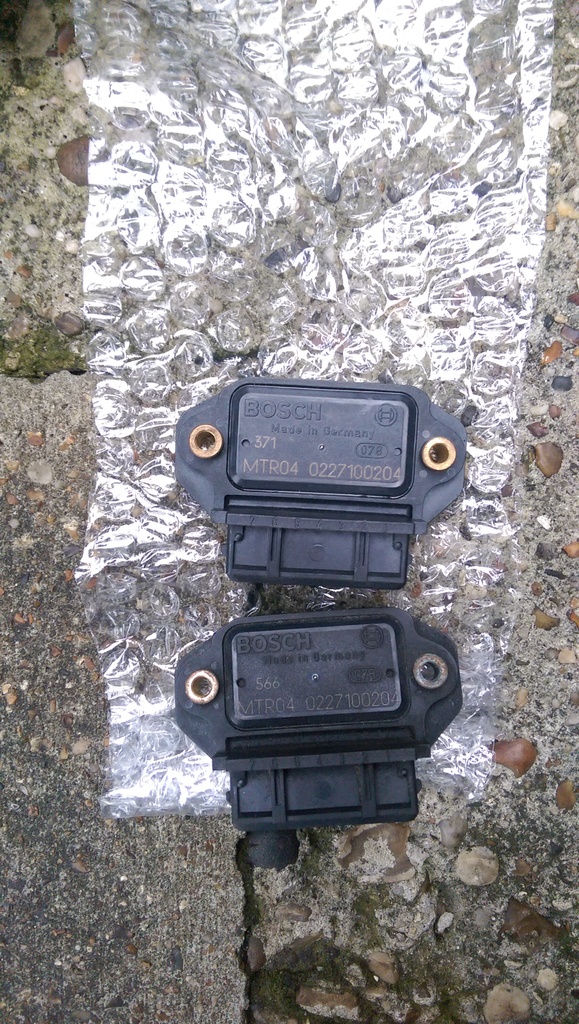 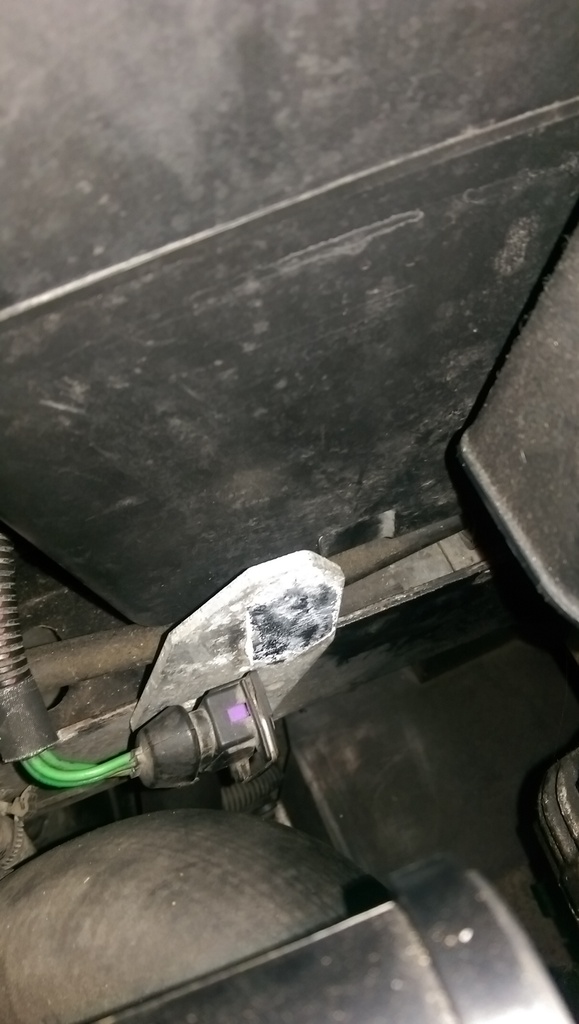 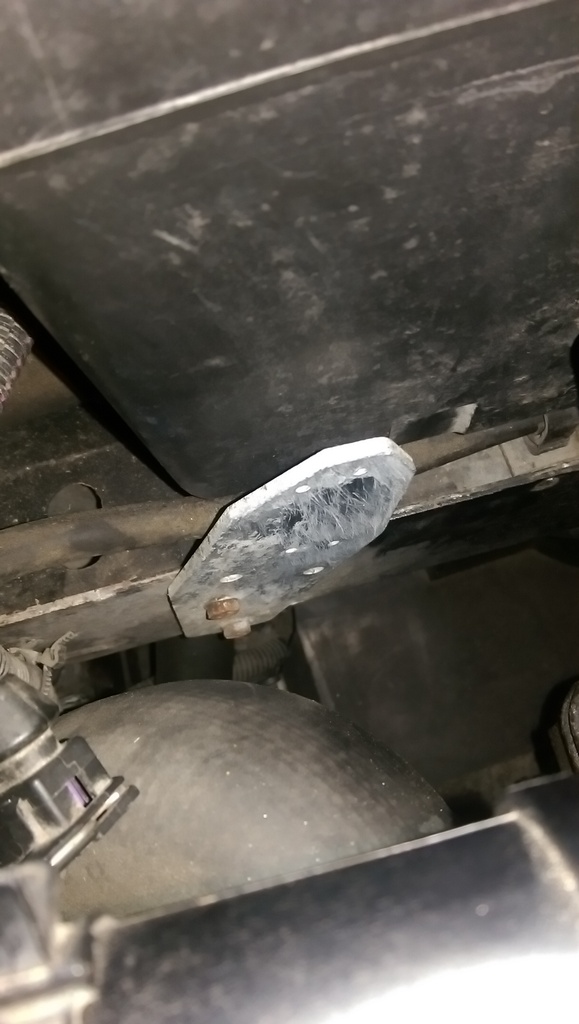 Back of the new module (shiny!) 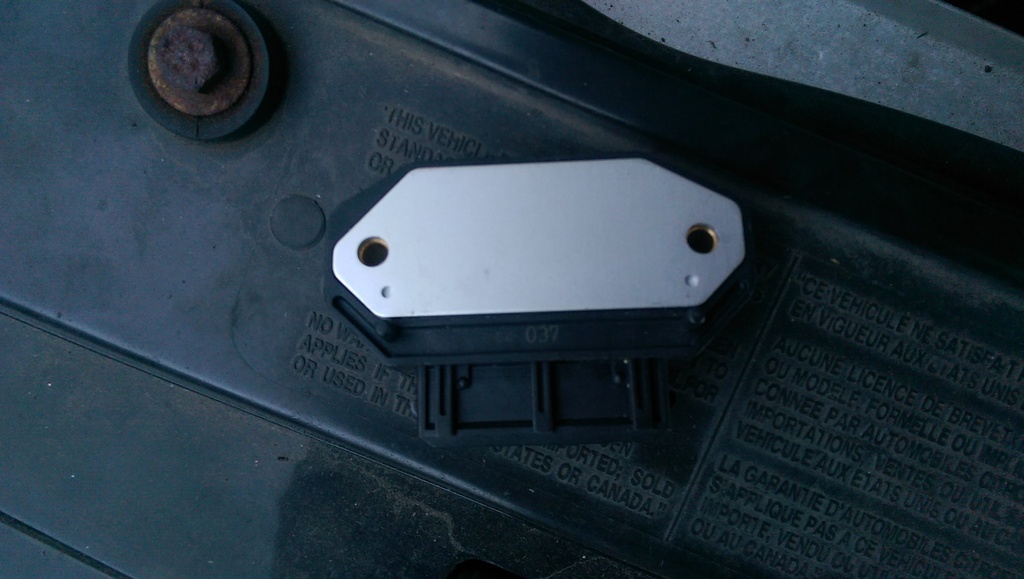 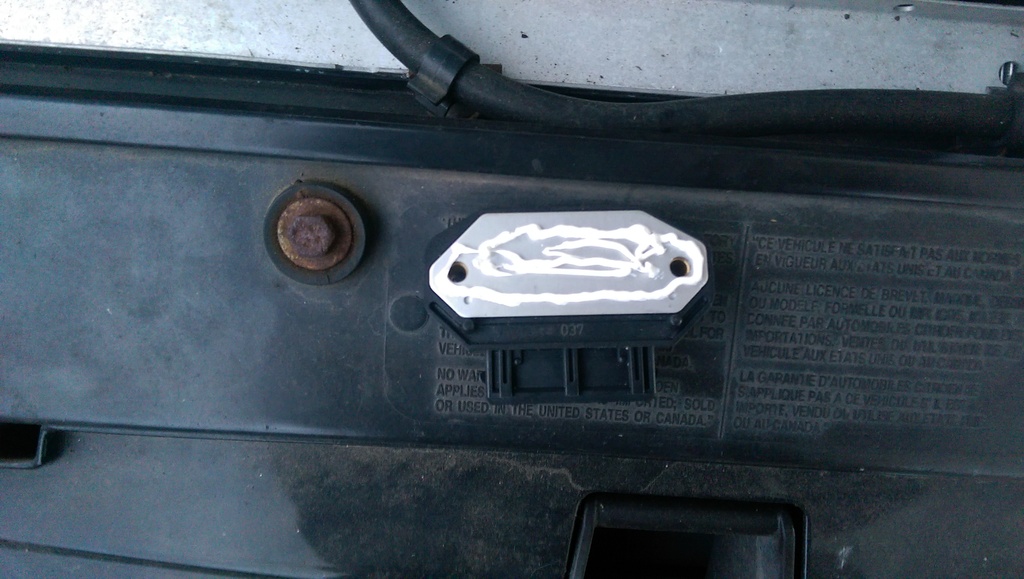 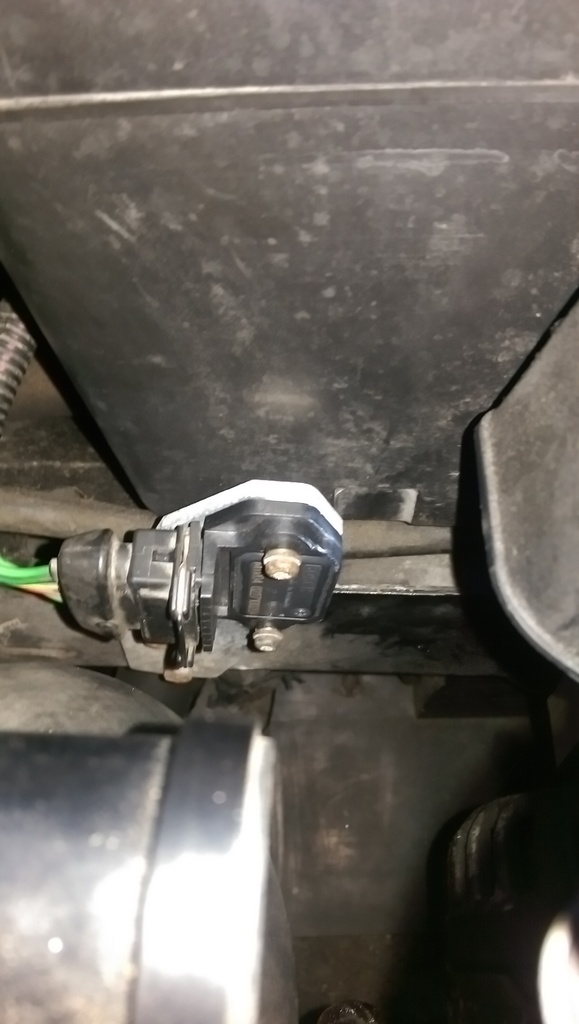 Result?
Still has a bloody mis-fire

Abject failure, as expected...
Thread to discuss that here
Top

Definitely need a Lexia on it now..

Hopefully then the problem will reveal itself...

Never known a coil give an issue on a TCT but there's always a first time...
Top

Iain, have you fully checked the fuel side of things in connection with the misfire?

The fuel filter may be choked enough to cause it perhaps?
Top

Nope, I've not done any checking on the fuel side yet. I really want to find out what all the sensors are doing and what fault the ecu has now logged

I should remind myself really that I started seriously looking into this because it was only running on 2 cylinders, which I have found and fixed (ignition module contacts). This has got me back to where it was before then at least (and how it has been for a number of years) I.e. running but with occasional misfire, so to be fair, I shouldn't have thought that doing the final install of the coil and ignition module would fix that.

The car is now in a state where I can sort the suspension and other niggles at least, once I get the ramp clear of other cars that are in bits!

The ecu fault light being on is a relatively new problem, which if I can get it to talk, might be linked to the misfire... Either way it would need to be done before an MOT.


Can you help with an ELIT session, or at least ELIT pin-out picture/numbering please Jim? (see other Lexia/Activa talkie thread)

Iain, I could help out with an ELIT session but logistically it's difficult.. I don't travel very far and never in the direction of Chelmsford I'm afraid.. You're always welcome here of course...

The ELIT cable is totally different and will not help you at all...

Mike's picture in your other thread is worth lots. One thing I do have is a working 16 -30 adaptor and I could buzz that one out for you...

Can you see no ECUs at all on the Lexia?
Top
Messages: 67