Thanks - it's fighting me all the way though

Once I get this lot sorted, it also needs a cv gaitor and then maybe that would see it back on the road. Then I'm left with all the things that have been wrong with it since I bought it, but never got round to doing... Sunroof tilts but won't slide (ratchet noise) engine has a horrible flat spot at the bottom end, heated matrix shagged and so many other various little things...

Nb: I'll be paying for the cv gaitor to be done, I can't be arsed fighting the ball joint out of the arm yet again! (don't know why, but Xantia ones seem to be completely inaccessible for any non destructive ball joint tool that I can find? )
Top

Have a word with CitroJim. Last year we replaced the reluctor rings on both Gracies' drive shafts, and the ball joints didn't have any issues.
Top

superloopy wrote:Good stuff going on there Iain ... looking forward to your heater matrix 'pictorial' ... it's the one job that has little or no pictures to go alongside the narrative on t'forum and scares the **** out of most people. You'd be the first!!

They are when you've done as many as Team WFA...

I see nice looking Xantia for sale with this matrix problem many times. I cannot do this job or I would buy!

From what I've been reading, the only bit of doing the heater matrix that 'scares' me is the scuttle trim. If I've read correctly, people have problems with the scuttle breaking when they remove it, or not sealing after they've replaced it?

I'm looking forward to getting the dash out tbh, so I can finally fit the interface unit for the steering controls to my pioneer headunit that I've had for about 5 years

That will all wait until it's back on the road and otherwise behaving though... (tempting fate)
Top

It's the scuttle trim and the matrix connector elbow that are troublesome Iain, the latter moreso especially on the
Activa as access is a bit rubbish. The scuttle is OK if you go at it with a long sharp knife.. The elbow joint is OK if you remove the turbo pipes first which on an Activa is a bit of fun too..
Top

CitroJim wrote:The elbow joint is OK if you remove the turbo pipes first which on an Activa is a bit of fun too..

Not for much longer it won't be... On my car anyway

Yeah, I had a quick go at the matrix connector on the bulkhead before I re-filled the cooling system yesterday - I was thinking of linking out the matrix until I fix it. I could get the clip undone no problem, but couldn't get enough oompf on the connector to yank it out (so it's stayed in circuit for now

) I didn't spend too much time on it though, because it wasn't the most important thing to get done.
Top

Great progress, it will be worth it in the end.

The rear accumulator i would cover in some grease all round that rear nut, the sludgiest thickest stuff you can get so it drives water out for future replacement as they are renowned for not coming away that easy and twisting the pipe

Dont forget to forward and reverse flush the cooling system including block and heater matrix before it all goes back together with a new rad in as there will be sludge hiding in there somewhere and keep some antifreeze in the matrix to help that live longer as well!

Right, made some more progress on this on Bank Hol Monday.

While the ECU box was out, a quick wire brush down on some small areas of surface corrosion underneath it. 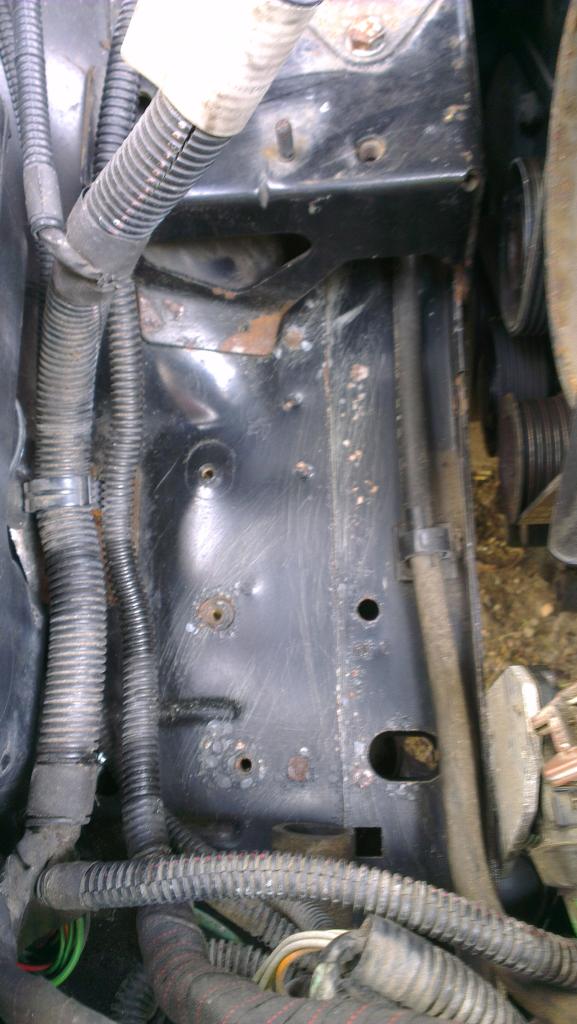 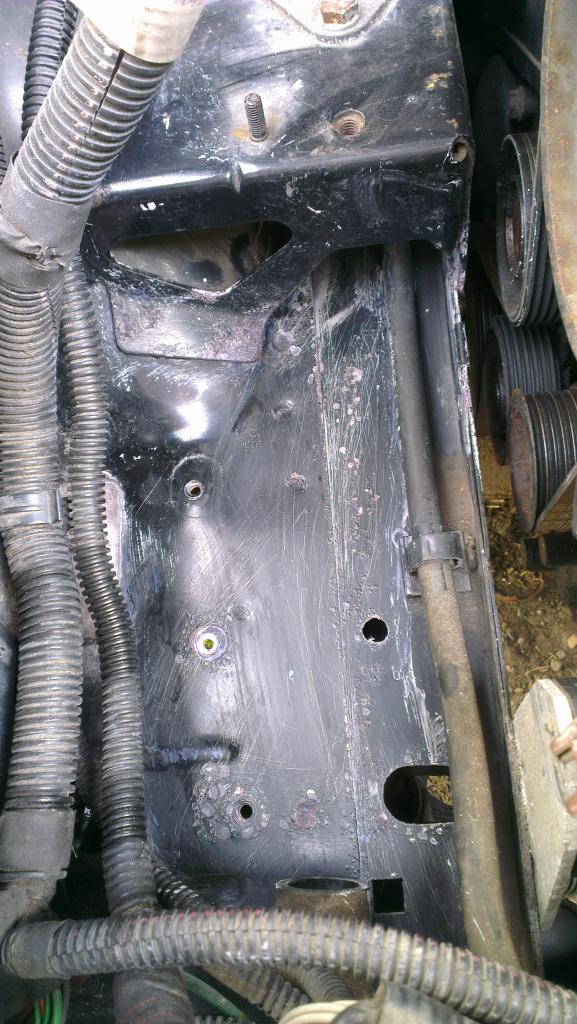 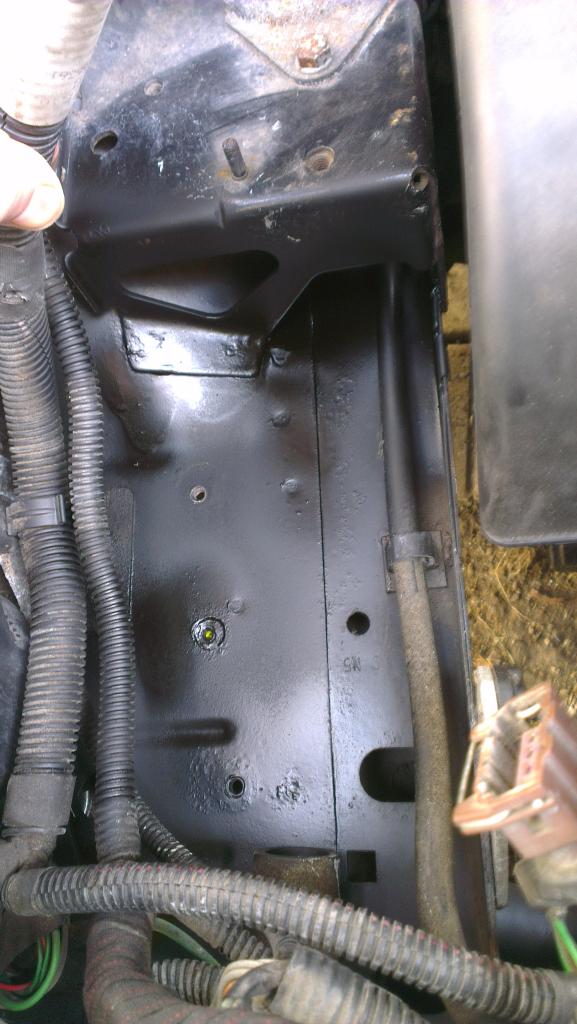 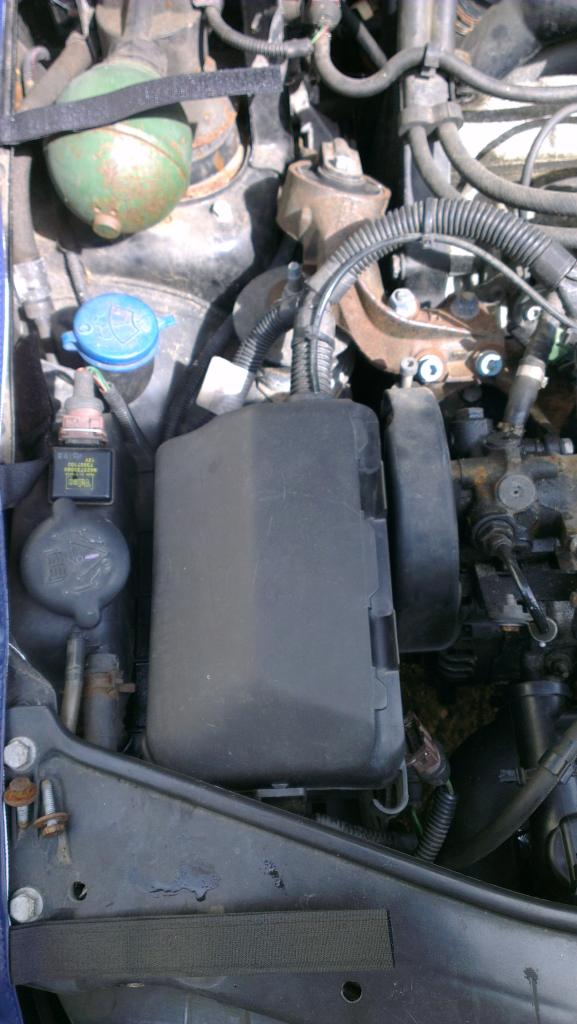 Trying to stop the bottom bayonet connector corroding again so I can get it apart in future, wrapped it amalgamating tape to protect it from salt spray. 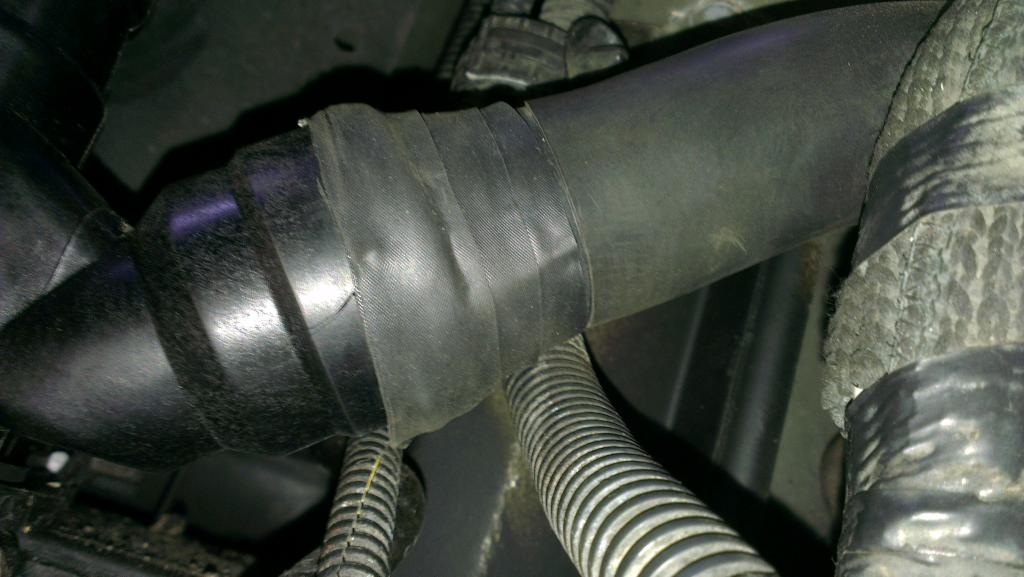 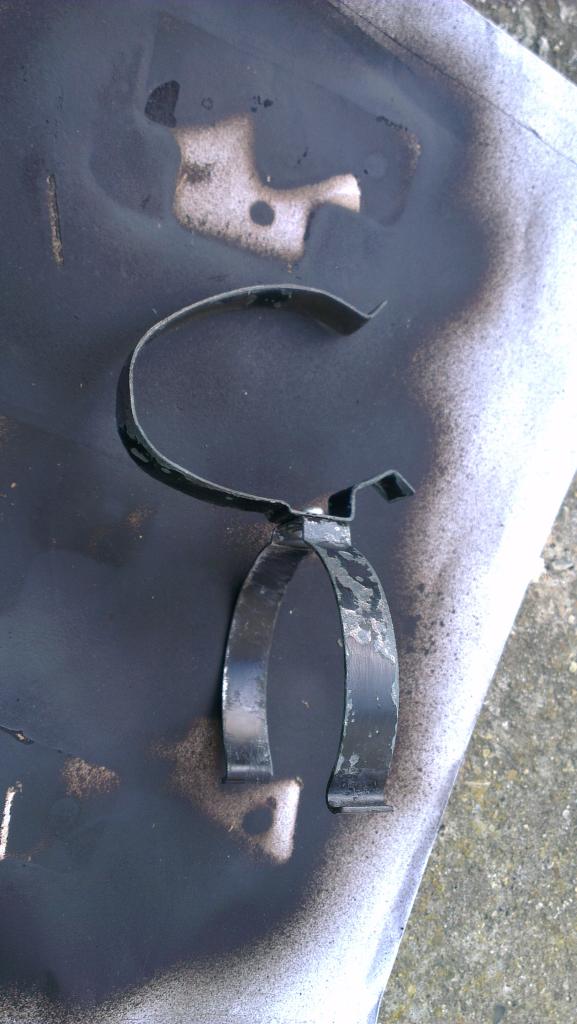 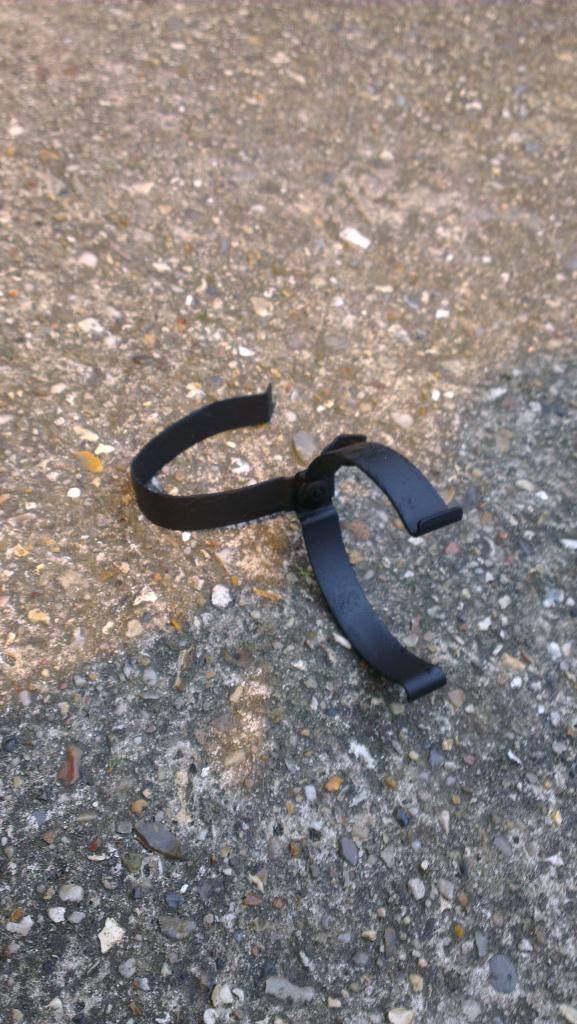 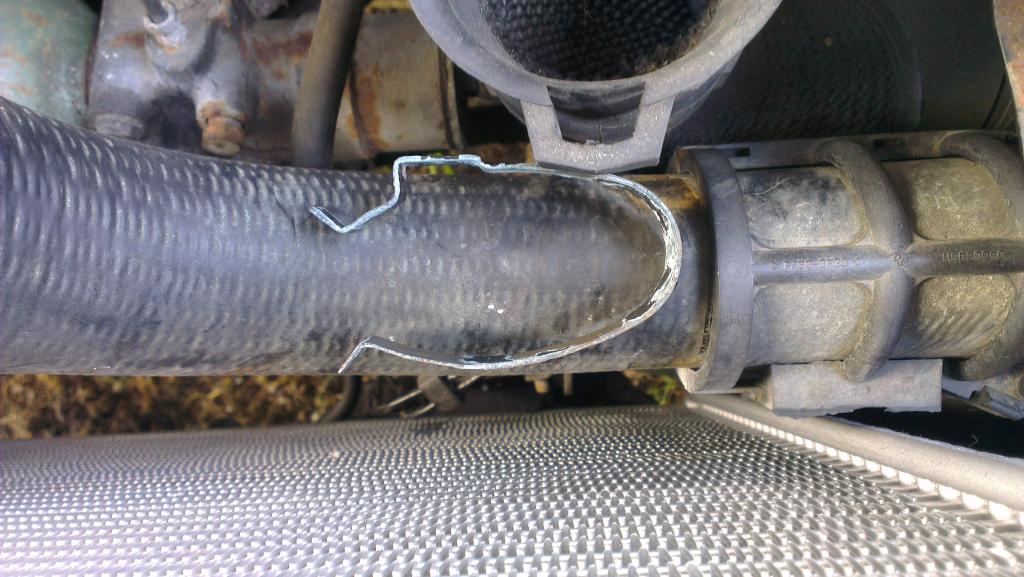 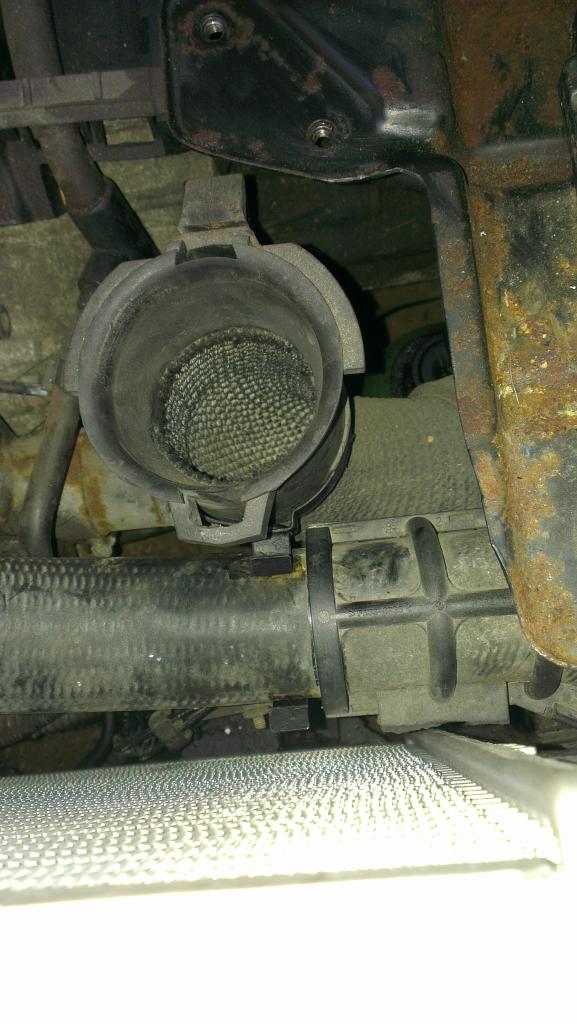 Front headlight had suffered from a bit of water ingress (turned out someone had had it apart before and not re-assembled correctly, squashing the seal) so took it apart in the hope it might just be deposits that would clean off with meths 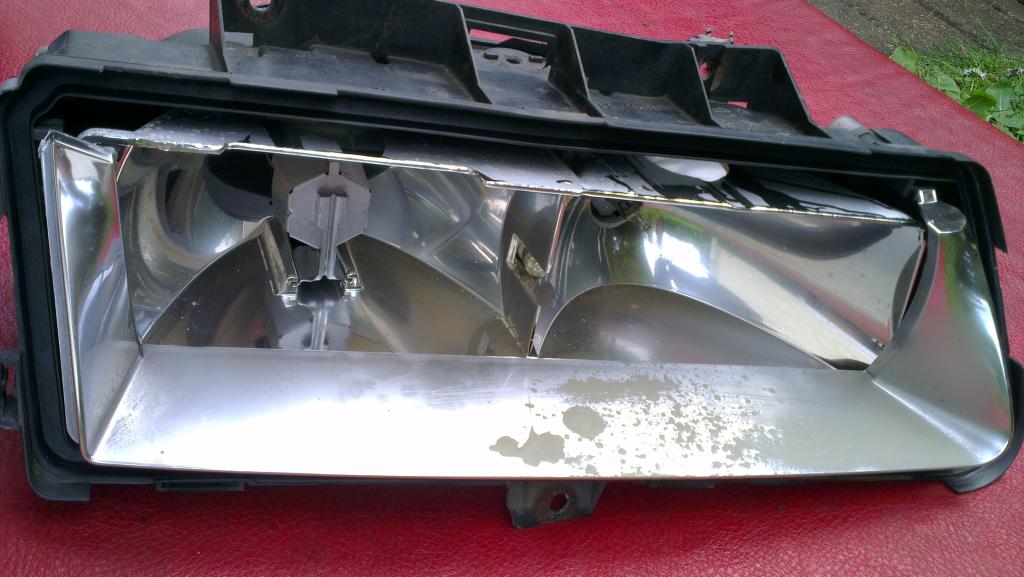 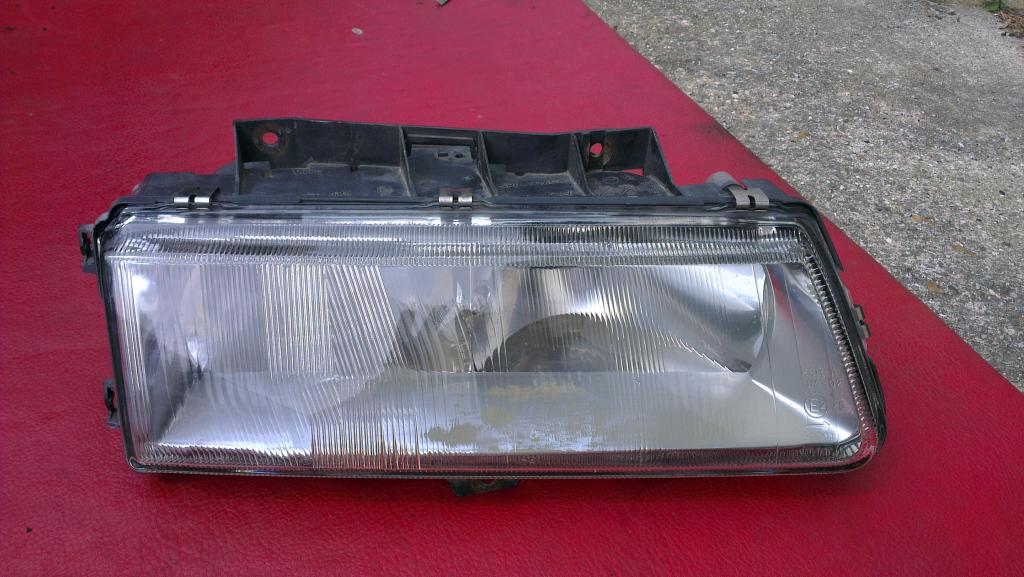 The other side had always had this little sod in it, so it came apart too while I had the opportunity. 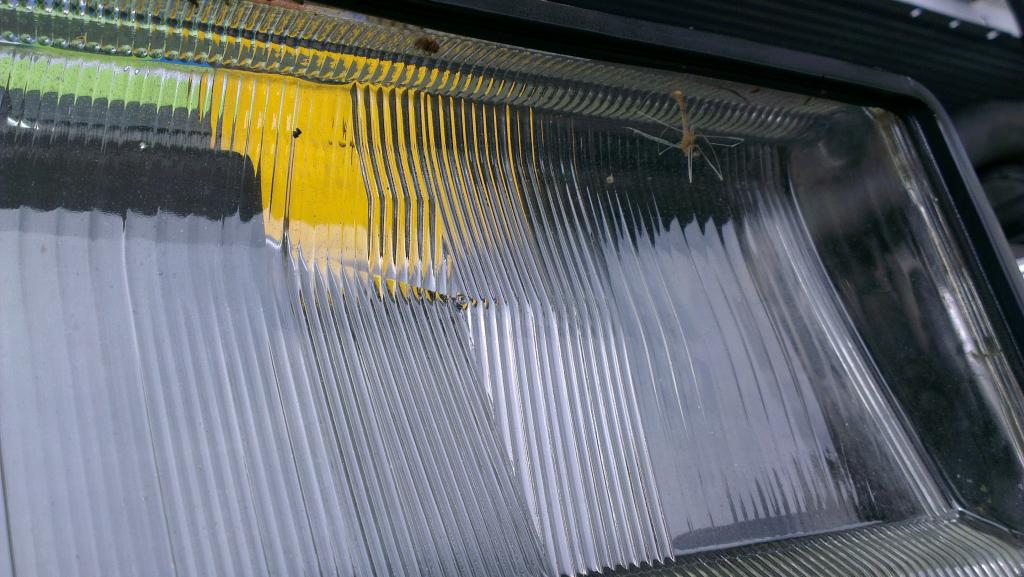 Back together and treated to a new set of indicator lenses because the originals were discoloured and covered in tiny surface cracks. They're pattern parts so the fit isn't as good, but bargain at £9 each 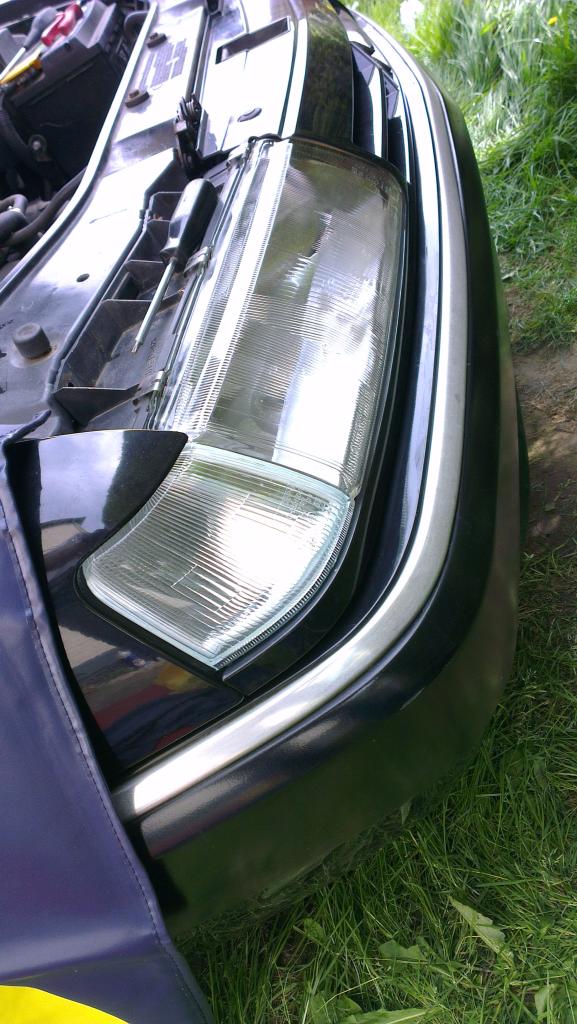 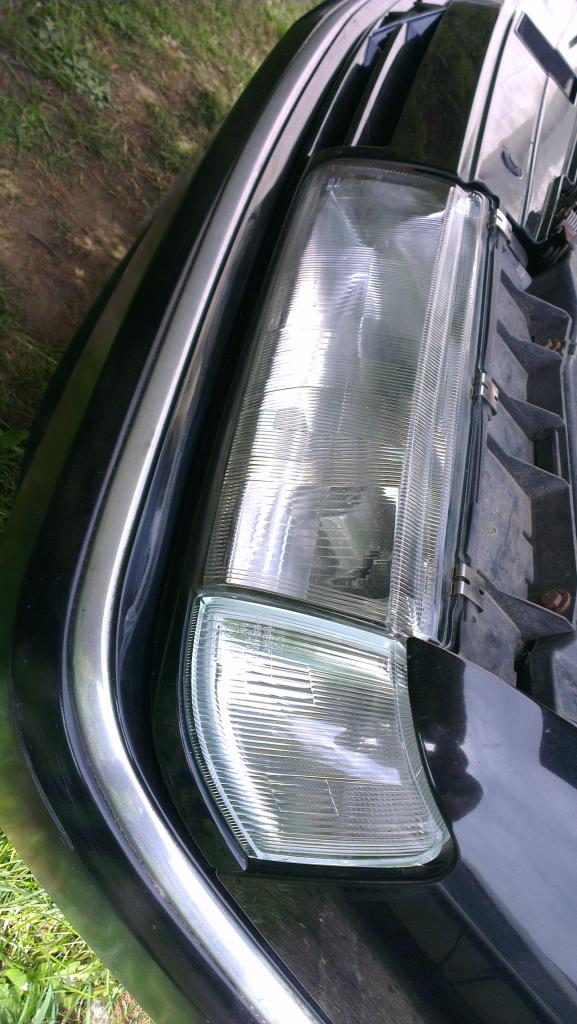 These brackets from under the rad carry the bottom hydraulic pipe and large wiring loom. They were well rusty, this is after scraping and wire brushing. Stuck them in de-rusting solution intending them to only be there for a couple of days, forgot about them and then remembered a week later... 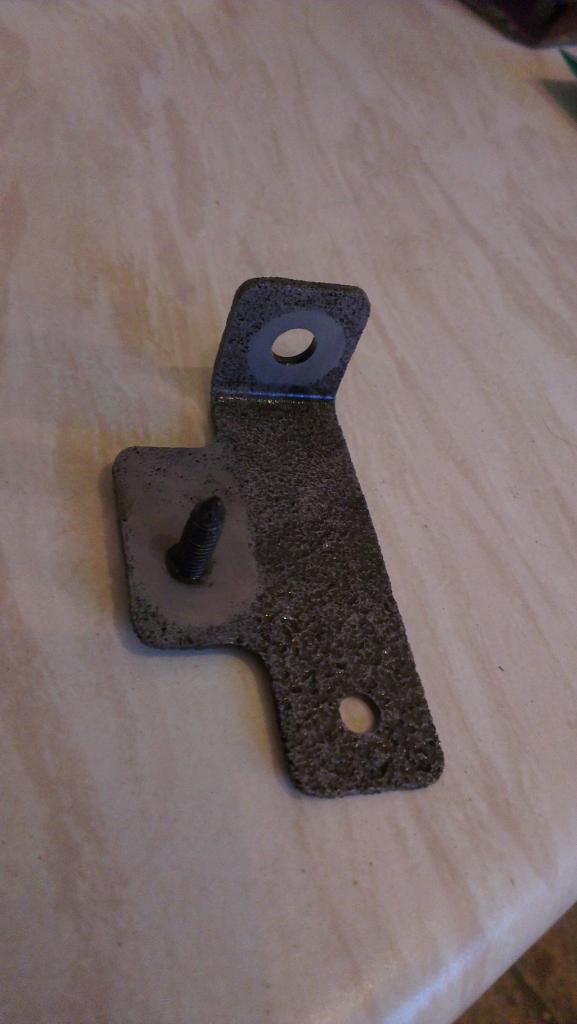 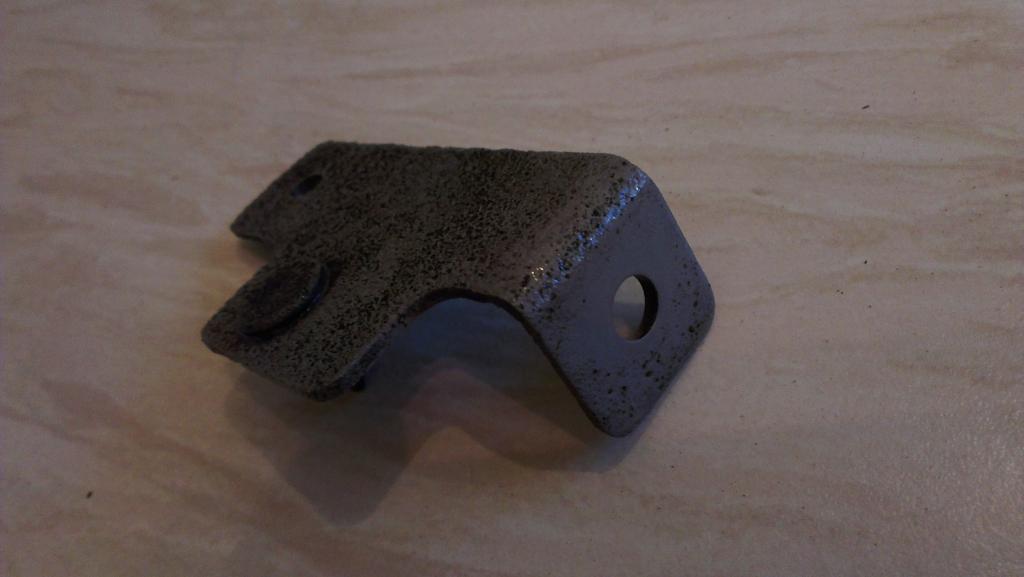 Dark spots are massive pitting, not rust. Couple of coats of primer and Porka Alpine White (just because I had a load left over and what else am I going to use it for?) 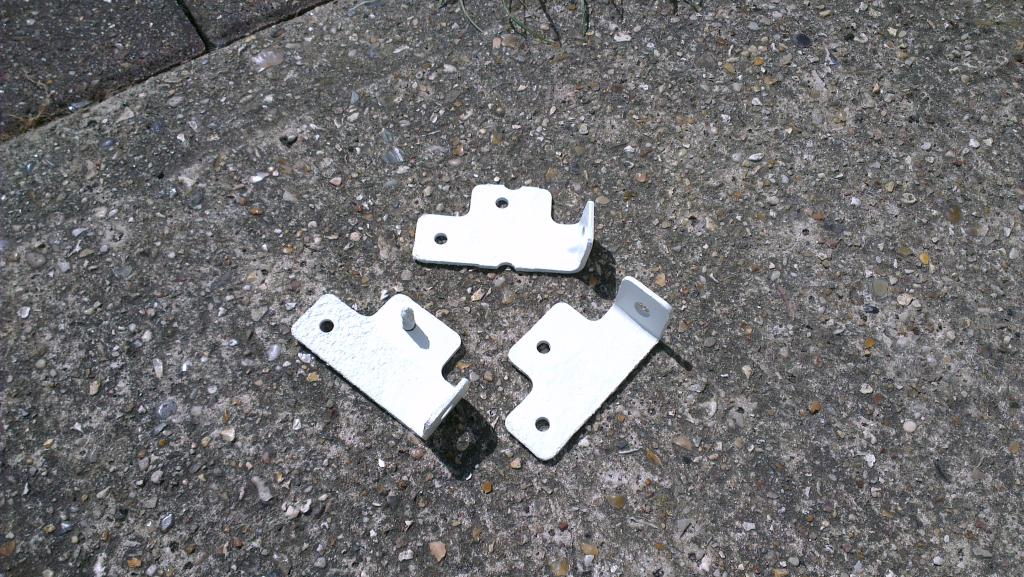 The lary colour doesn't matter because it'll be covered in a coat of black Dinitrol. Refitted with all stainless bolts, 2 of which I had a massive fight with because of crap access (2 HOURS FOR 2 BOLTS!

) Mental note in future, if you remove brackets after the rad has been removed, ffs refit them before refitting the rad (and everything else)

Front end finally all back together, 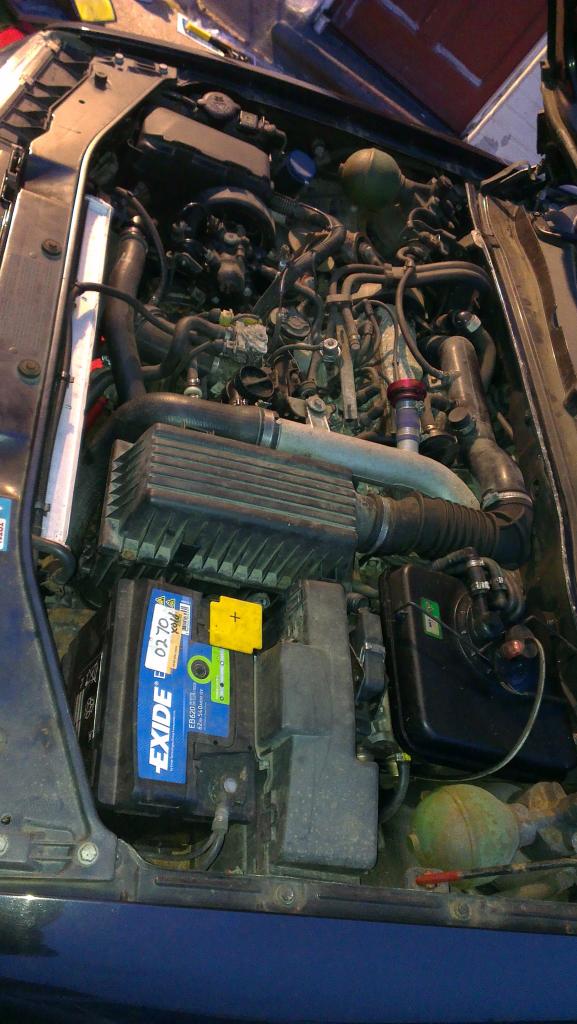 And back on it's wheels 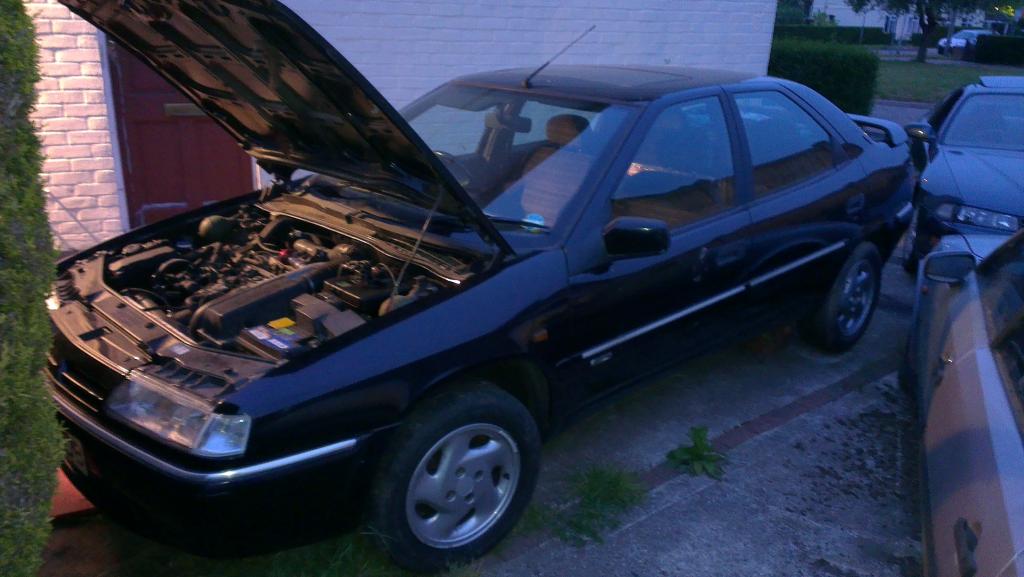 (hollow victory though, because as soon as I lowered the suspension again, it was back on blocks - still got some more wire brushing and undersealing I want to do before I move on to adjusting the suspension

KP wrote:The rear accumulator i would cover in some grease all round that rear nut, the sludgiest thickest stuff you can get so it drives water out for future replacement as they are renowned for not coming away that easy and twisting the pipe

It will be getting Dinitrol'd when the weather's dry enough to get back under the car...


KP wrote: Dont forget to forward and reverse flush the cooling system including block and heater matrix before it all goes back together with a new rad in as there will be sludge hiding in there somewhere

That probably wouldn't have been a bad idea, but I'd already filled it. When I drained the system it was very clean though (I have changed the coolant once already since I've had the car). It'll be getting drained again soon though anyway (heater matrix) so I might give it a proper back flush from the heater pipes, then...
Top

Iain you have certainly been determined to get this work done.
Thanks for the pictures, and excellent write up.

It would seem you have a rare colour Activa as well.
Top

Thanks. No real progress since then I'm afraid, too busy with other cars (bought another 3 since then - and even got 2 of those back on the road!

) naturally the additional CX I acquired isn't one of them

Hopefully the final big piece needed to get the Xantia back on the road will be done this weekend - putting a 4 post ramp in the barn I rent, so I can get the Activa in there and go through the suspension system set up without fear of being squashed

So who knows... Hopefully in a couple of weeks I may have some more updates!
Top
Messages: 67