I was going to go out and wash it today, but the weather was ok, I was not. Its now dark too. It has 16" alloys as standard, two reasonable goodyears and two recent budgets. I had bought a set of 16" multifit with good tyres which was going to find their way onto the civic. I can forsee them getting painted black, calipers orange to match the interior and finding their way on. I do have hubcentric spacers off the 18" from the c4. I think 18"s would be a bit of overkill on a c2

A c2 with 17" resolfens? I dare say it will get tried at some point. Wheels and caliper paint is all that might get changed, and maybe better headlight bulbs. Then maybe an orange roof and bonnet, custom exhaust, limo tints, I'm thinking out loud again

daviemck2006 wrote:I was going to go out and wash it today, but the weather was ok, I was not. Its now dark too. It has 16" alloys as standard, two reasonable goodyears and two recent budgets. I had bought a set of 16" multifit with good tyres which was going to find their way onto the civic. I can forsee them getting painted black, calipers orange to match the interior and finding their way on. I do have hubcentric spacers off the 18" from the c4. I think 18"s would be a bit of overkill on a c2

A c2 with 17" resolfens? I dare say it will get tried at some point. Wheels and caliper paint is all that might get changed, and maybe better headlight bulbs. Then maybe an orange roof and bonnet, custom exhaust, limo tints, I'm thinking out loud again

Never mind another day tomorrow! Orange interior?? We need pics! I have seen a C2 on Resolfens & looks good, see here
http://www.planete-citroen.com/forum/sh ... 170&page=5" onclick="window.open(this.href);return false;
I agree that 18" would make it look even more like a toy!
Top

In the absence of fotos of mine here is a twin, at £600 more than I paid.
http://www.ebay.co.uk/itm/2003-CITROEN- ... 4d176d68bf" onclick="window.open(this.href);return false;
An I may be biased but I would not think this one, although less miles, is cleaner or a better service history than mine.
Top

You seem to be enjoying the C2 Davie, I look forward to some pics.

It's enough to make you swear, lots! What am I talking about? Citroen prices! Wheel bearing for the c4 £297.64 fitted price. At least that includes VAT. I can get a bearing for about 25 quid and can do the job for some beer tokens. I just phoned stealer to brighten up my day with humour haha hahahaha hahaha!!!!!!!!
Top

Puncture on the c2 this morning, after spending about an hour looking for the wheelnut key, and finding both of them, so there is a spare, got the spare out of the cradle and the thick black polythene it's wrapped up in I found a brand new matching alloy spare under it and a brand new michelin tyre. That means I can look for a matching michelin and put them on the back and put the Sunitrac budget ditchfinder serious lack of grip which cost £90 for the 2 a few months ago crap where they belong, which is anywhere but on my car. One can live under the boot floor for a spare and the other can just disappear. I suppose I'll get £15 or 20 on e-bay for it. Next stop the scrappy to get another 4 non locking wheelnuts then the lockers can find their way into the wheelie bin. A wheelbearing is ordered for the c4, but I'm not going to take the hub off outside in this cold weather, that will kill my back so will have to speak nicely to future son-in law. The problem there is he is doing lots of overtime just now to pay for their upcoming wedding. C4 will just have to have a wee run say once a week just now until it gets done. Or advertised for sale with the bearing needing changed, but supplied for £100 less if its not fixed by the time I do advertise it again in the spring. My son has his driving test next Wednesday, he wants to insure the c4 for him, it would cost about 2&1/2 grand which he does have but I'm not letting him loose in a car of that power and speed for his first car. He can look for a 1.0 to 1.4 cheap car the same as all his mates are doing. He had a fieste before but gave up on driving so it was sold, he liked it and is now learning in a fiesta so I would not be surprised if it is one of them which turns up He likes my c2 though so a 1.1 or 1.4 c2 could be on the cards. We shall see. We are off to thainstone car auction tonight to see whats on the go there. Thats a dangerous place for me, I go there and usually but something!!!!!! Hope theres NOT a nice c5hdi auto there

Didn't buy at the auction on Thursday. I was sitting on my hands when the 407 went through, unmarked in silver with black leather, sold for £1100. C2 was a bit iffy sold for £650. Son then made an eBay purchase, so off I went on Saturday to Berwick upon tweed on the train to pick up a fiesta 1.4 zetafor a good price . It's another with full history and unmarked. You would honestly would think it's a 6 months old demo with delivery milage, not 10 yrs old with 77k on it. Must have been polished very regularly, and it is waxoiled underneath. He is happy. Now he needs to pass his test on Wednesday. C2 going well, C4 not been used, and is on ebay. Anyone want it?
Top

Pleased your enjoying the C2, they are fun little things to drive. I've nenver been convinced by the senso-drive box but so long as it stays reliable.

I went away for a run in the c4 today and came home without it. It has a new owner. I'm relieved it is gone to be honest, it was a great car but never really right for me. I have loved every drive in it and I expect that I may well have another in the future, but not a vts, most likely taking a chance with a 1.6hdi egs. I don't think I could have gone straight from a vts to a hdi egs. The drop in performance would have been too much. I have taken a trade on it, and it's something I have wanted for ages so ticks boxes. Easy entry which is one big concern, but it's manual, would be better auto. It's a landie. Ok a freelander but still a landie. That ticks a big box for me, wanted a 4x4 for a long time. It's a 3 door with a removable roof. Another box ticked cos I've wanted an open top car for ages also! Wrong engine again, 1.8 petrol but only done 52k. Pics will follow, that's my c2, Shaun's Fiesta and the Landie!
Top 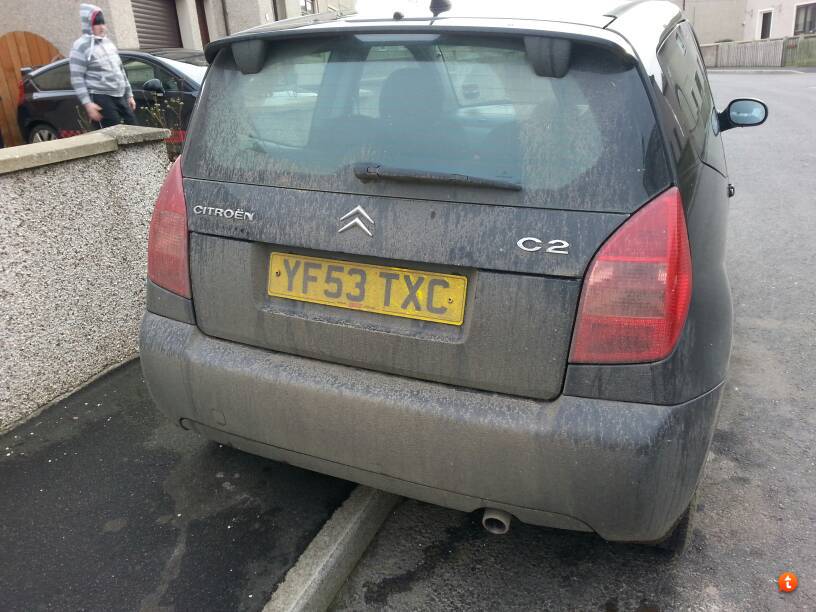 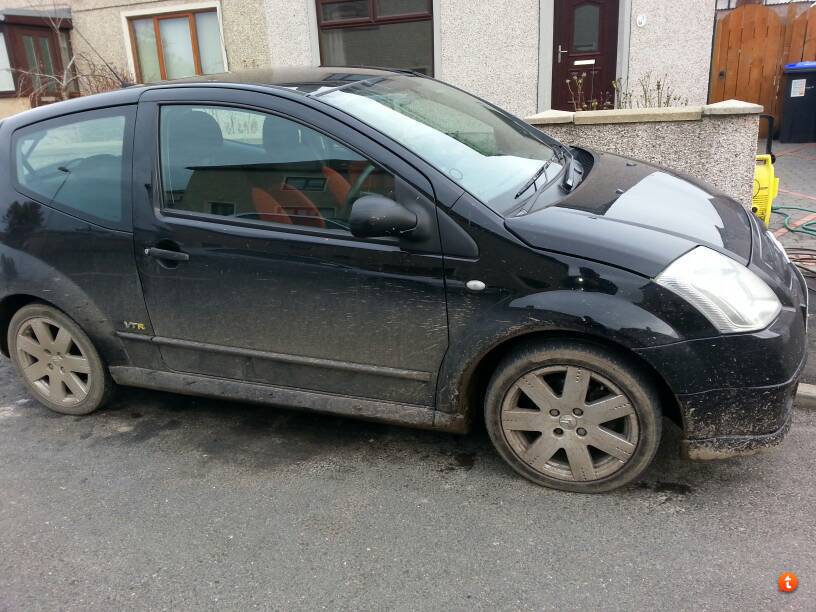 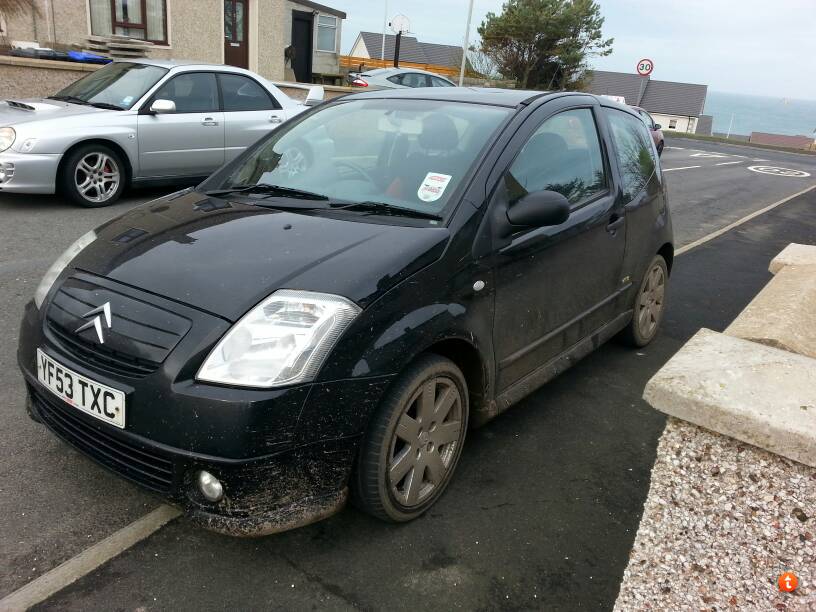 The c2 as it arrived home 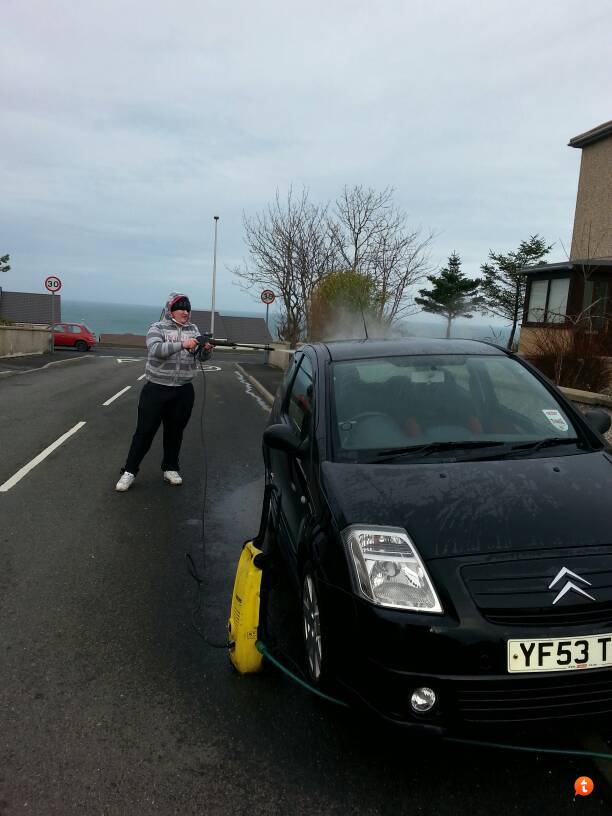 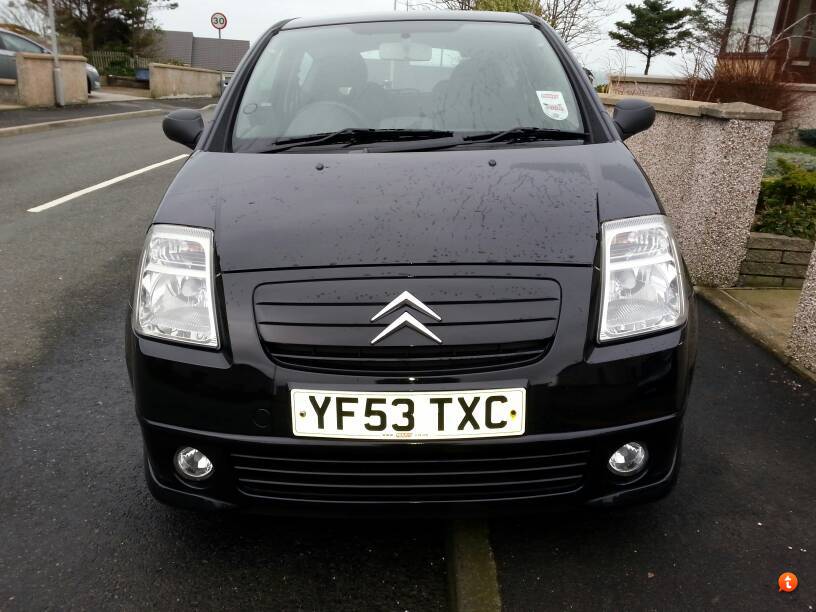 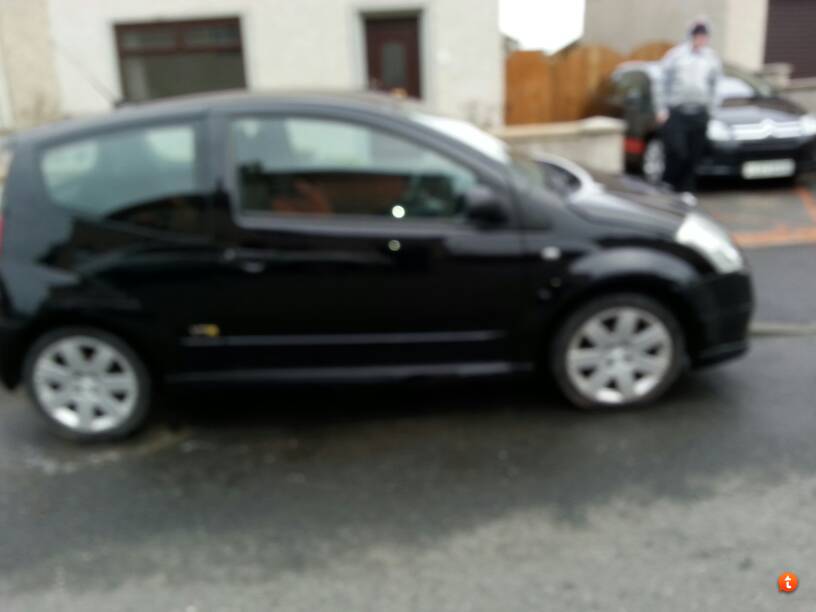 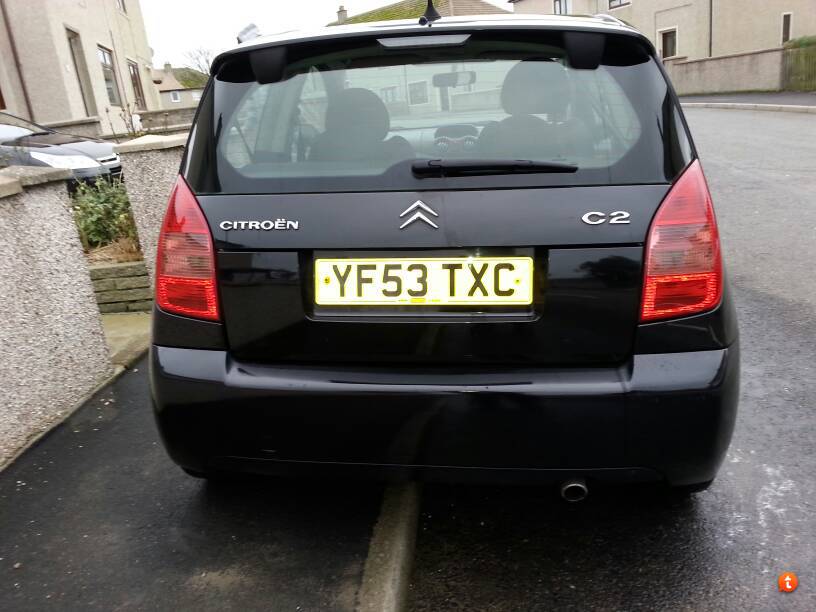 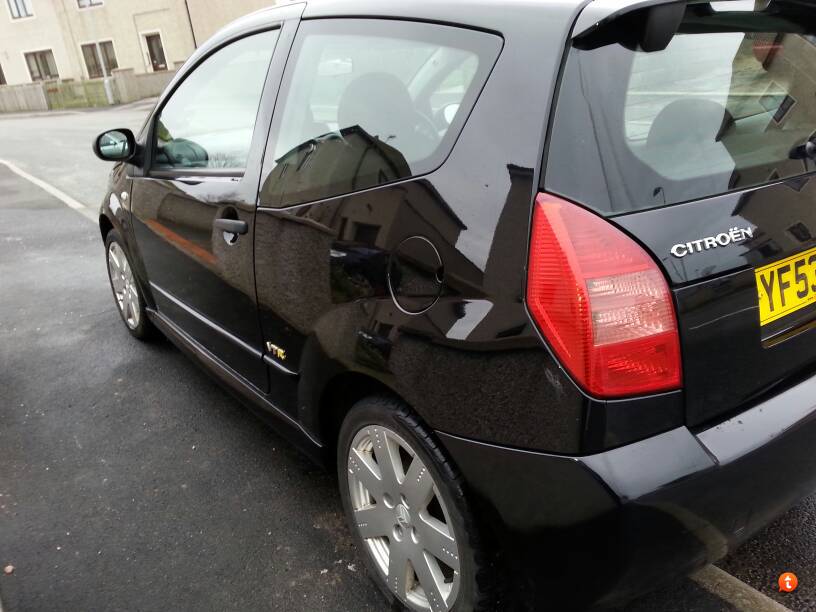 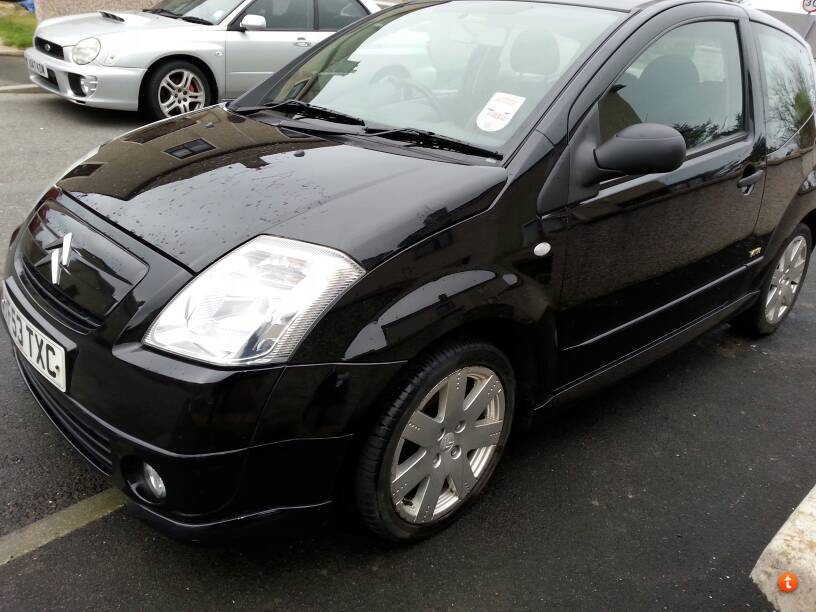 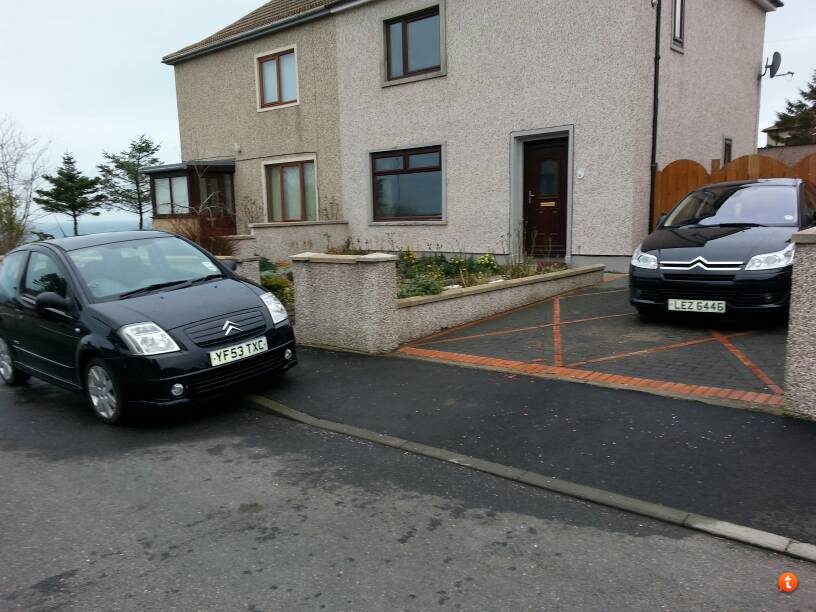 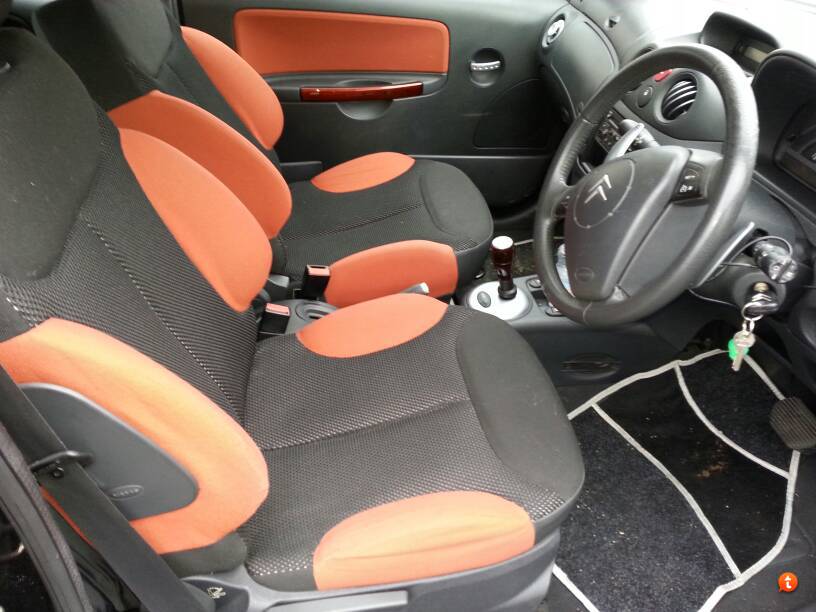 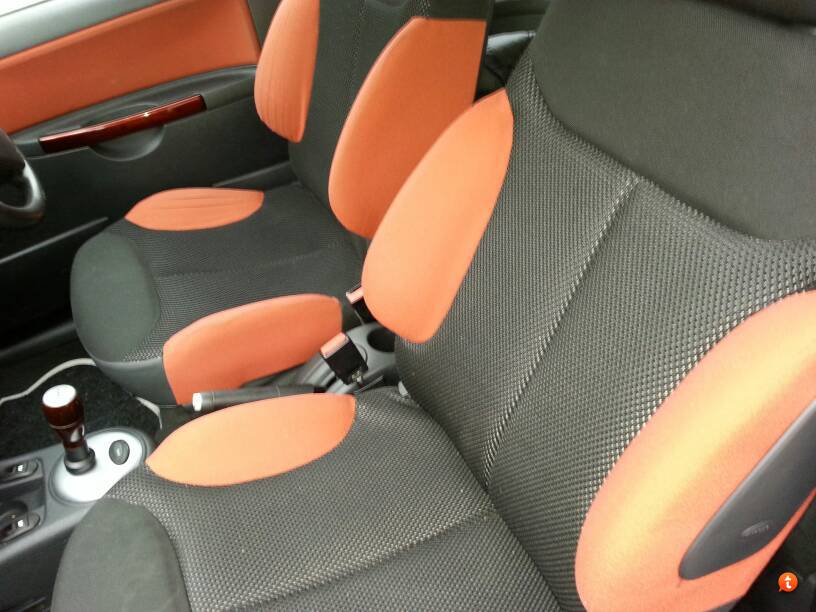 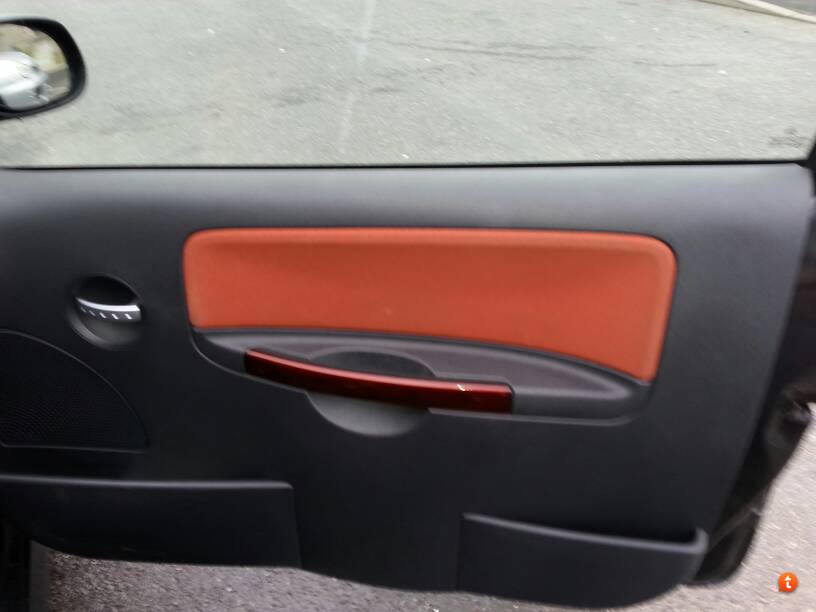 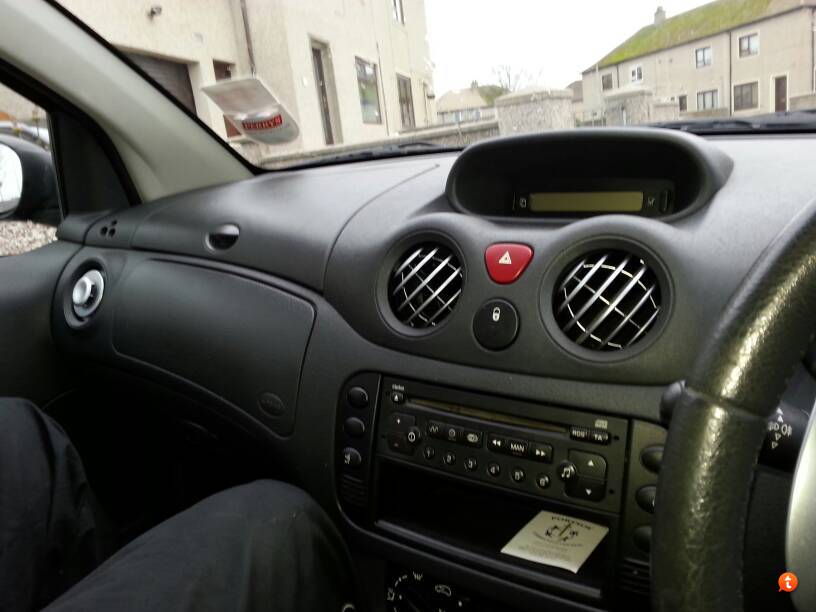 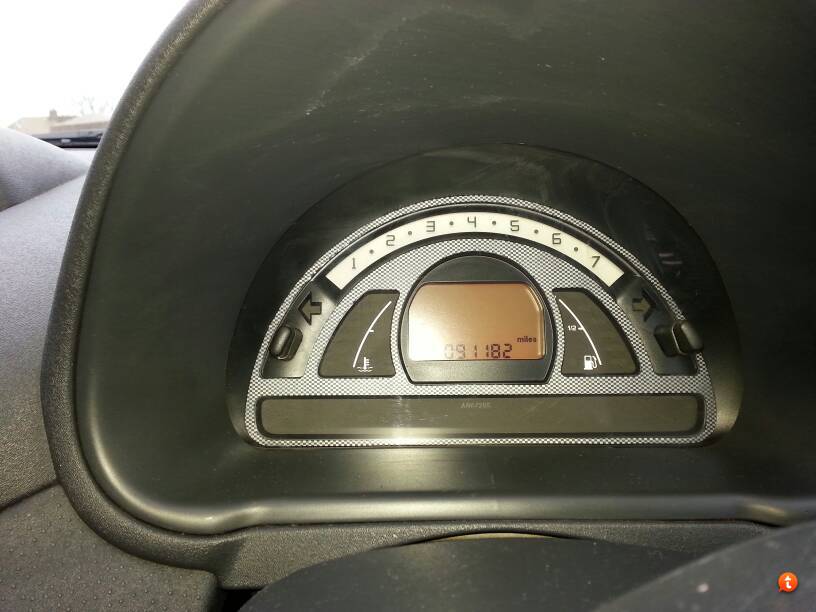 All cleaned up and looking good. I hope this tapatalk is working, it's a lot easier than mucking about with photobucket@

Right, on to the non Citroen cars. Shaun's Fiesta, a nice enough motor for his first car, and although I don't like fords and I wasn't very comfortable on it's 250 mile journey home it seems to be a good ane. 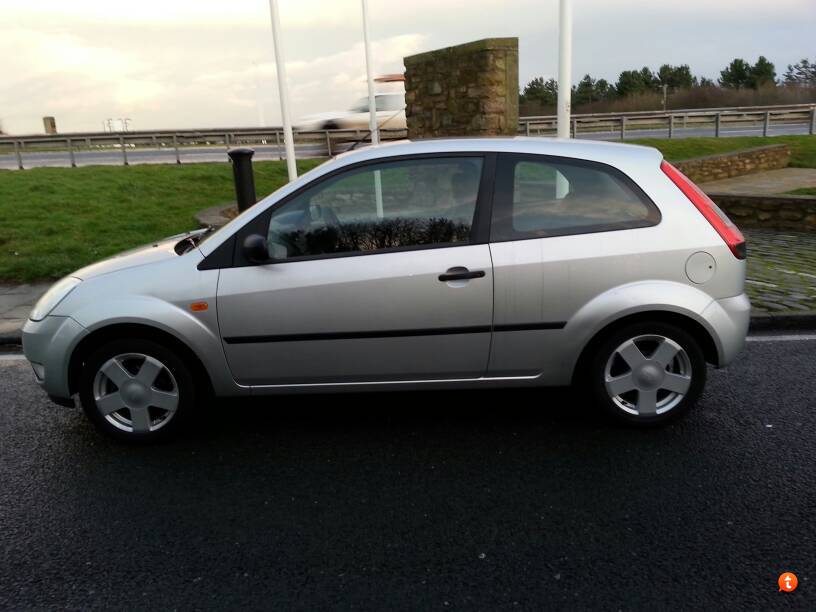 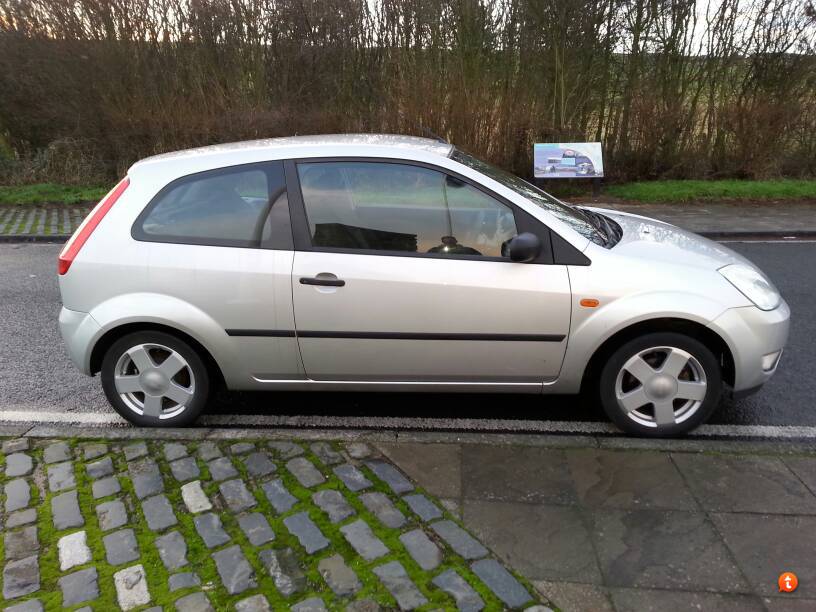 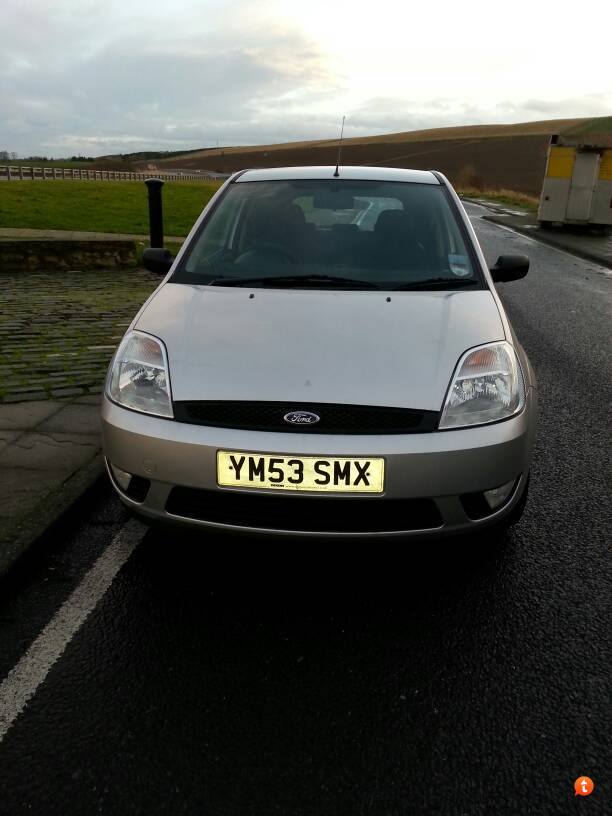 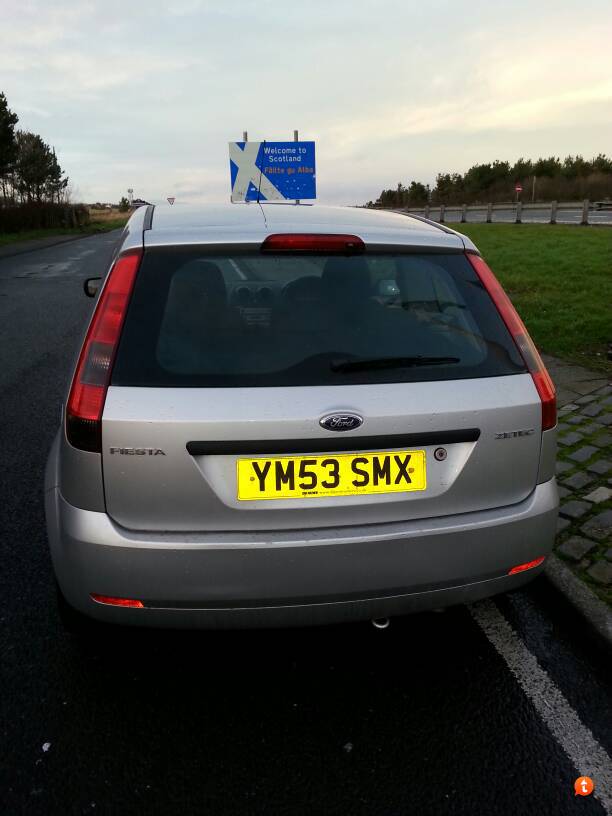 As you can maybe see this is on the border, the engine is in Scotland, the boot in England.
On to my landie. 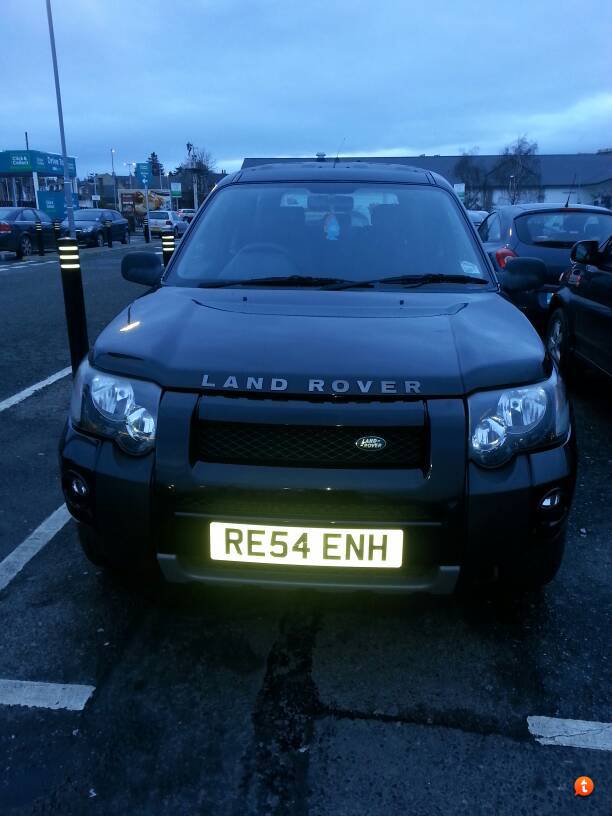 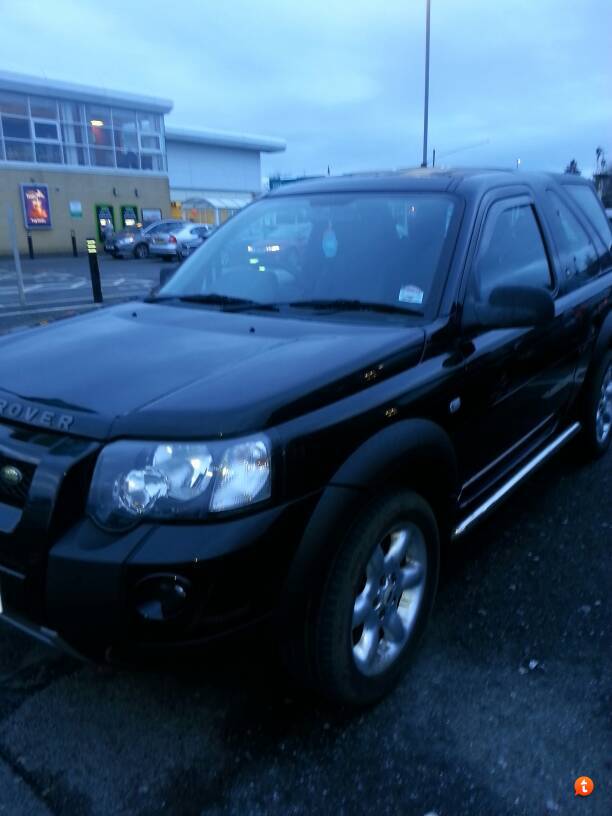 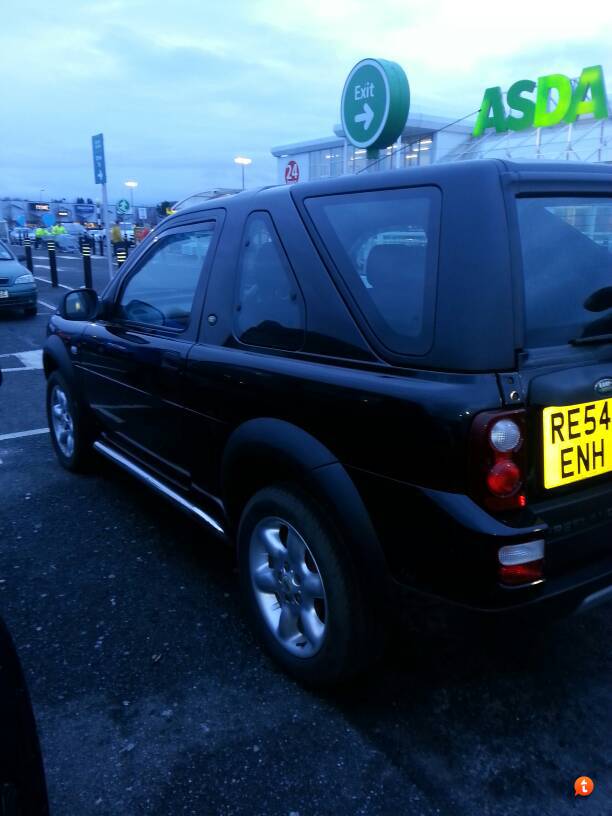 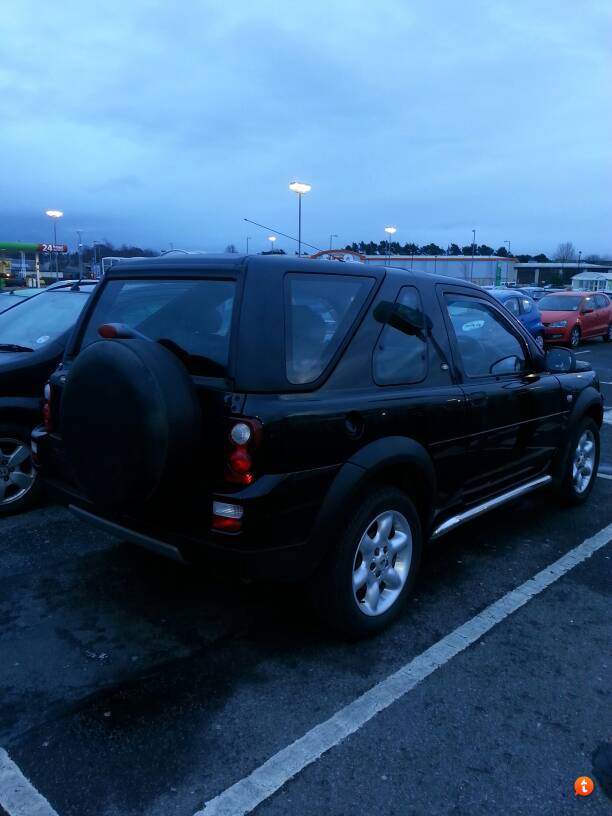 Note, it's black, again! The seat is comfortable and the driving position is spot on. It's quiet and comfortable cruising at 55, and I love being up high. It seems a genuine motor, is it a keeper? Ask that in a couple of months once I see how expensive it is on fuel. If its no more than the VTS then I would say it could be. Time will tell.