Re: RE: Re: Davie's french attraction.

That rust will be a mare to fix. Both shuts on my TD have been patched unprofessionally due to cost. Functional but not cosmetic. Ok for a lugger but for the Activa you"ll want it done properly. If you choose to diy post up plenty of pics before during and after.

One more observation ... is the car sitting a bit high at the front on those wheels or coud it be down to the low profile tyres?

Certainly looks quite a distant between tyre wall and wheel arch ... could be my eyes tho'

<edit ... just read the WHOLE post and see that those tyres are not the end product, d'oh >

My Activa came with 4 sets of wheel and not one was the original Activa set.
I got one set of 15s but I really like the 16 inch set and I think that is going to be the favorite once the winter tires that are fitted on them are worn out.


I dare to be different. I think it needs go faster stripes, orange brake calipers, bigger rear spoiler, huge side skirts, big spotlights 4 exhausts of 4" round each

I see you and I up the ante adding ghostflames and LED on the rims ..

I forgot about flames! I'm not going to do the rust myself. It would only be a bodge up job if I did it, which would be ok for a work hack, not good enough for my baby. She's in really good nick apart from these two parts, the left side looks far worse than the right, it does look more surface on the right so I may try rubbing it down a bit and see how it goes, but the bad side I'm not even going to touch. I think a screwdriver would go straight through with little effort

Think you'll find they're both as bad as the other. Surely you can prep the shuts yourself to save a bit of cash. My V6 looks identical to yours and has an mot looming!

I like cars with aftermarket wheels, just a bit different! It's not as if you can't change them back easily is it?
Shame about the rust, coz rust never sleeps.
Top

Re: RE: Re: Davie's french attraction.

Fake Concern wrote:I like cars with aftermarket wheels, just a bit different! It's not as if you can't change them back easily is it?
Shame about the rust, coz rust never sleeps.

I'm with you here. And stickers, depending on the car. They come off leaving no marks. I like my cars to look a bit different. It's such an easy job to put the original ones back on. There will be no stickers going on it though. Wheels may be changed from time to time but nothing else.
Top 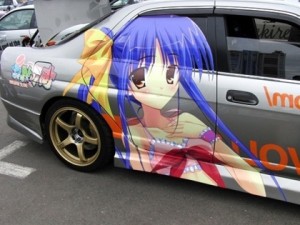 Being a fan of Japanese anime (and much else Japanese - Karate is a Japanese martial Art...) I absolutely love that!

I think my C1 would look nice with that on it

It was a day I was hoping to do car stuff, but alas it wasn't. It had brightened up nicely at 12 to 12.30 so I thought, right discs and pads on the back time. Chris included them along with one or two other things when I got the car. Out to the shed, the discs lying on a shelf exactly where I put them along with the pads,,,,,,,,,,,,,,,,,,,,,,,,,1 hour later searching the shed, no pads were seen. A few swear words later, well a lot, I thought Fxxx it I'll put the wheels back on and inspect the front. Once the front was on stands, wheels off, discs and pads inspected and they are really not bad, less than 1/2 worn, I will put on the handbrake cables. The weather gods decided otherwise though when the wind got up and temp dropped several degrees and the rain/sleet/snow started. Now getting dark so nothing done apart from the other end is on axle stands. At least I know I have the bigger 288mm discs.

Tomorrow the 107 goes for mot in the morning, then I have an appointment in the afternoon, then I pick up 4 friends near home to go to a meeting. So at some time between now and 6pm tomorrow I have to put the front wheels on to the activa, and take it off the axle stands, as the 107 is just a 4 seater. Hhhhrrrrrrrrmmmmmmmppppppphhhh I'm not happy.
Top

I can commiserate very strongly Davie, I've been poorly for a few days now and so frustrated that I can't crack on with a lot of work I need to get done

All the worse for me because it's been lovely weather here and even more worse I've not been able to ride my bike, swim or practice karate...

Hopefully tomorrow will be better for us both

It's the lost brake pads that really annoyed me. On closer inspection the rears really need doing. The fronts can wait for now, just get the handbrake fixed. I should have time to get pads tomorrow, between mot man and appointment in Elgin, and to get the wheels on, maybe manage that tonoght yet, even though it's dark now, if it dries again.

I'm away to investigate something I need, which a nice man told me about earlier [emoji4]
Top

daviemck2006 wrote: I'm away to investigate something I need, which a nice man told me about earlier [emoji4]

I have a belief I may know what it is Davie