Yea, she will never be a show car, though she had an internal clean Last week before we went away.
Top

Citroenmad wrote:Your Xantia is certainly a good one Paul, a real workhorse. Will catch up with you this weekend no doubt

Weather's not looking too promising ... don't take your show cars out lads, sorry I meant Chris

I know! I might see if I have a plastic bag big enough to keep the Activa out of the rain until I get there

Well as an update to this i think Paul should ge an award at CXM....


For most stuff squeezed into a Xantia Hatch! I keep saying i paul and you know im right but an estate would have been much better now as nothing would be outside of the car and your passenger seat may still have been free lol
Top

Cheers Will, I have to say, Franklin DID take a picture of the loaded boot, weither it makes a publication remains to be seen..

A little experiment will be comming my way, with known results to be..

Friends have recently had a mishap in their Xantia...

So, I shall be salvaging the car in the next week or two.. after I shift two cars at the farm, plus a shell..

Anyway, the car, though on irish plates, is a later 2000 V reg car with the outlined dials on the dash. This also means, and I hope im right, its will have the later ECU with cruise control function in it.

The experiment, it is the fact that the engine is a 90bhp, where mine is a 110bhp. I know the actual Fuel System is the same between engines, and converting a 90bhp to a 110bhp needs NOTHING but a Turbo and inlet swap between them. So I wonder whats different in the ECU.

Should be interesting, and hopfully give me cruise control if its there..
Top

Thats nasty!! Was it their fault and how did the other vehicle fair compared to it?

Is this to go into your conversion project per chance??

The wheels will do nicely on yours i bet and some other bits. I was under the impression the ECU's could have cruise enabled by a lexia and the requisite parts installed or is that just the C5's and some XM's??
Is that an estate as well??

No, it was a Lamppost I beleve. Ill be collecting it from Liverpool sometime..

Its a hatch.. NO its a HDi 90 so the engine will just go and sit some where.. Im not touching the fuel system it clean and runs well enough. Its just had a NEW clutch beginning of this year too!! Front disks, rear disks, etc etc..

Being a HDi 90 it has the smaller TD type front brakes.

HDi ecus initially DID NOT have cruise in them, so from 1998 to sround 2000 its not there. But from 2000, meaning late V, W X and Y reg cars the ECU format changed and the ECU had a new "Configuration" option added with cruise in there.

The wires from the ECU to the inside of the car still need adding, BUT Ive done that already, also the lever installing, done that too.. and some other bits n pieces .. etc..
Top

Its going to be sornd lol.. its back at the owners house now.. need to get some jobs sorted and cars out my way then we be good to go...
Top

I'd A frame it if i had one but they are a really dodgey area for towing compared to a trailer and then sticking an XM estate on the back of a trailer really needs a much heavier car than i have available to tow with!
Top

Cheers will.. its far from driveable.. it wont start as some of the harness is ripped out .. ill get the trailer out when i shift the xantia shell and your estate ill go and get it..
Top 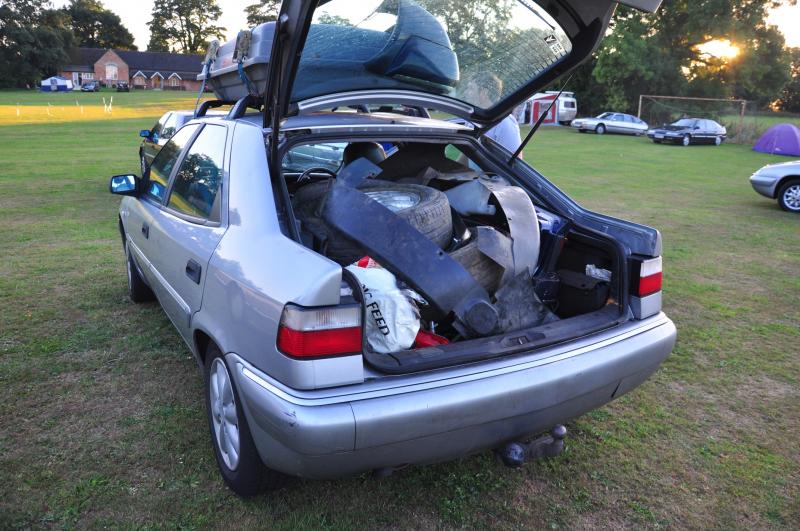 Even that picture doesn't quite show how much stuff was in (and on!) that Xantia...
Top

Even that picture doesn't quite show how much stuff was in (and on!) that Xantia...

Even that picture doesn't quite show how much stuff was in (and on!) that Xantia...


Is that what they mean by "A car boot sale"