Just been to Aldi - I have two close to me, one recently opened and a quite large store.
I went to the small one last night and on top of my usual shopping wanted Speyside single malt whisky and their Cromwell gin, the first for my son and the second for my daughter but there was none.
Wet to the big one just now and none there either.
Asked the manager - who was stocking the booze shelves and he said they had sold more in two days than they normally do in nine months.
I was motivated by this article but he said it was out on Twitter and Facebook and that had started a run on them.
Bu99er

myglaren wrote: ↑
18 Aug 2017, 17:31
Not a like-for-like but I do occasionally visit a huge Tesco in Consett and always spend 30-50% more.
It has always been the case that you chuck the goods back in the trolley and pack it at the counter provided for just that and most people are aware of it.
Not a problem and keeps the checkouts moving quickly.

That never happens in our local Lidl. I'm there pretty well every Tuesday and I've never seen anyone do it.
Top

All the Aldis and both Lidls apply that here.
Top

Have any of you tried the Welsh Penderyn Singles https://www.tesco.com/groceries/en-GB/p ... /257477018....£10 up on the Speyside but very nice, However, I find it still evaporates through the glass!!

Not me.
I did try some of Sainsburys own brand single malt Irish a few years back then discovered that it was rebranded Bushmills.
Liked it very much indeed.
Bought Bushmills black label a few times but not for a few years now.

I'm a very sporadic sampler of the nectar though. Just been through a Calvados run and currently a Lidl Cognac binge - bought to make Creole coffee but even after several bottles the coffee is still to be made. Makes nice baked apples though.

I still have a bottle of The McAllan 12 year old and one of Suntory something special, bought as birthday presents and untouched for over a year, along with some stupidly expensive wines that have been there for years, so expensive it is a shame to drink them.
Stupid I know but I keep resisting the impulse to open them. Even the boxed Tikaji Aszú 6 puttonyos

Just seen that Lidle are doing a range of single malts too:
https://scotchwhisky.com/magazine/lates ... gle-malts/
Top

I never buy booze, I'll drink a small tot of brandy at night if it's been given as a Christmas gift but when it's gone it's gone.
Top

Booze is but a distant memory to me now... Not touched a drop - for health reasons - for years and years now...

I don't miss it - as I don't miss meat, cheese, dairy and countless other things I can no longer eat/drink...
Top

Not exactly on topic, but I bet Lidl & Aldi have the alternative "milks" on their shelves too. One of the big 4 had an offer on Alpro almond milk the other week, down to £1.20 ish from £1.80 ish....tempted me to try it (started with the fresh tasting "white almond" as opposed to the "roasted almond").....and...

It was a very nice drink on its own, and made a decent porridge. Would buy it again, but not at £1.80 though.

Now this is where the "loyalty card" comes into play. The supermarket collect the info for selling you stuff direct, but after buying the Alpro, within days I was seeing adverts for Alpro products coming up on the computer, i suspect that the loyalty card data and contacts spills over to the manufacturers as well as the retailers.

Then again could just be "frequency illusion". Maybe the Alpro adverts were there all the time but I just started noticing them because I had recently decided to buy that product for the first time.

Are Lidl and Aldi into the loyaly card game too?

No, no loyalty stuff.
The nearest thing is to put the details from your till receipt onto their website and you are then eligible for a sort of lottery draw.
Top


I haven't had a drink for 5 years. If I do take it on top of the painkillers I am on it will make me so something stupid. I know this cos I have done on various occasions. I am now a grateful member of AA, both types of AA!
Top

I very rarely drink (with the amount of driving I do I cannot afford to lose my licence), but on Tuesday evening I had a miniature 12 year old Glenfiddich whiskey, to wet the ashes of my Great Aunt (whose ashes we interred on the preceding Friday). It went to my head fairly quickly, which is why I am glad I did not have a dram by her graveside (and I know that Sylvia would understand why).

I will NOT have an alcoholic drink if I know I am driving in the next 24 hours. Several years ago a manager contacted me with an emergency, and asked if I could help. As it was the weekend, and I had not been expecting to be asked to help out, I had been out with friends, and was not fit to drive (I may well have been under the legal limit, but my judgement was clearly impaired). Fortunately my manager understood.
Last edited by Hell Razor5543 on 19 Aug 2017, 19:51, edited 1 time in total.
Top

A long story but I only drink very sparingly and never if I am likely to drive in the next 12 hours.
Short version:

I was called out to a rescue one NYE and would have been done for being over the limit were it not for my Renault 11 TXE Electronic, the car's ranting voice clearly intimidated the bobby who gave it up without forcing the breathalyser.
Top

James, yes, both Lidl and Aldi sell the alternative milks I drink

The only thing I can't get in either is soya-based yogurt... I can live with that as I can get it in our local Co Op which is otherwise expensive rubbish but is within walking distance...

Co OP quality is very poor, especially their fruit and veg... The worst of the lot... In Newport Pagnell it's the only supermarket we have

I used to like Coop but they've gone down the pan now.
Top

Yep I saw those in store - if I didn't already have a digital vernier I would have picked one up, very useful.

They also had those universal wrenches that looked quite good but I have enough spanners so I settled on something I didn't have - a vice.

Oh, and if you need a frame welding up mount your new vice let me know - you know how sometimes a stubborn ball joint needs a lot of torque to get it undone

Sound like a great idea except for one small detail - I don't actually have a bench to mount the vice on at the moment.

There was a wooden bench at the far end of the garage when we moved in but it was pretty rotten and horrible due to water ingress through the roof so it got ripped out. So currently I have nowhere to mount the vice - I bought it on the theory of "I'd really like to have a vice so I'll grab this now and have somewhere to mount it one day".

It's only about half the size of your vice so I'm not sure if it warrants a huge reinforced bench, nor would it be suitable for lower balljoints.

I'd quite like to bolt it to the top of a builders wooden sawhorse, something like this: 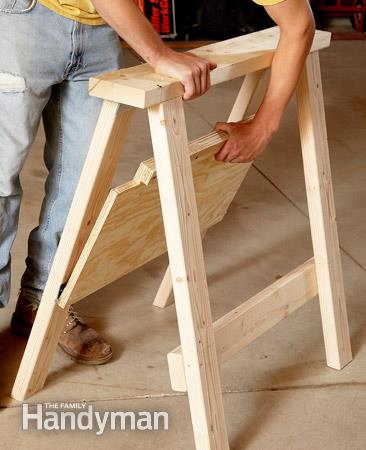 It's about the right size for that. Dad had a 2x4 sawhorse like this with a vice on the top (a bit smaller than the vice I bought) and we used it ALL the time for 100 different jobs, its portability was extremely useful. Any time something needed to be held, sawed or cut, out came that bench to where ever we happened to be working on something. So I think that's what I'll do with this one.

I already have a couple of vice saw benches (with the two sliding wood sections and two adjustable handles that you find at every hardware store) that clamp things between their two halves, and while they're ok for wood they're useless at holding metal or anything that needs to be held really tight so a proper metal vice on a portable bench will be great.
Top
Messages: 957