When attaching such a charger, should the battery be disconnected or does it not matter. (On a car with an ECU)

With a decent well-regulated smart charger it should be OK to connect it with the battery connected. I'd be very happy to connect my charger like that...

An el-cheapo unregulated charger I'd be tempted not to but confess I have on simpler Xantias in the past without ill effect but I'd never risk it on a BSI-equipped car such as your C5 Alasdair...
Top

Stickyfinger wrote:A regular BSI reset is no bad thing on a C5 Jim

I'd be more worried about damaging spikes from a simple cheap unregulated one Alasdair, Spikes that may do damage...


Stickyfinger wrote:Given the chance of a Xantia forgetting its codes on a long time "sleep" makes me want to leave it all connected

Agreed but you must only use a decent clever charger for this, such as the Lidl one, or you risk a severe shortening of battery life... Never a cheapo unregulated one.
Top

Yep, it is why I got the Lid"elle" one
Top

I have now got one as well.
Top

Hell Razor5543 wrote:I have now got one as well.

Perfect for the job but check it regularly to ensure it is still happy...
Top

Simon, in answer to your point about your alternator being barely able to cope in slow traffic when there is peak demand....

You're almost right... I checked my Activa today.... 14.4V on idle and nicely charged battery but with no real load...

Then I checked with as much on as possible: headlights, both sets of fogs, HRW, blower at full tilt etc. and I found on idle the voltage was 13.5V but rapidly climbed back to 14.4V when the revs were above 1500rpm...

So, if you do an awful lot of stop-start and crawling with a full load on then no, it's marginal but out on the open road running at fair speed it does cope...

Therefore, given your circumstances, to float charge overnight is a good plan...
Top

I've found the same with mine Jim - I have been suspicious for a while that charging wasn't quite as good as I would have wished for, going by the voltage display - although it is only a rough guide and absolute voltage isn't indicated - it is actually the only gauge I look at.
Did the same check as you last week and had identical results.
As this car does four miles from my son's work home in the morning, followed by four miles to my work - so two starts and almost all electrical equipment running, stands for eight hours then four miles home, stands for six hours then four miles to son's work, stands eight hours, rinse and repeat.

Under the circumstances it does very well but occasionally I give it a decent run in daylight, like today, drove to Murton to get my daughter from work with barely any electrical gear running so hopefully it will have done it some good.

I do plan to swap my two batteries over now and again but it hasn't happened yet but only been six months since I first decided to do it.

I did buy a reasonably precise voltmeter to keep an eye on things but it means cutting an aperture in the dash to accommodate it so that is never going to happen.
Top 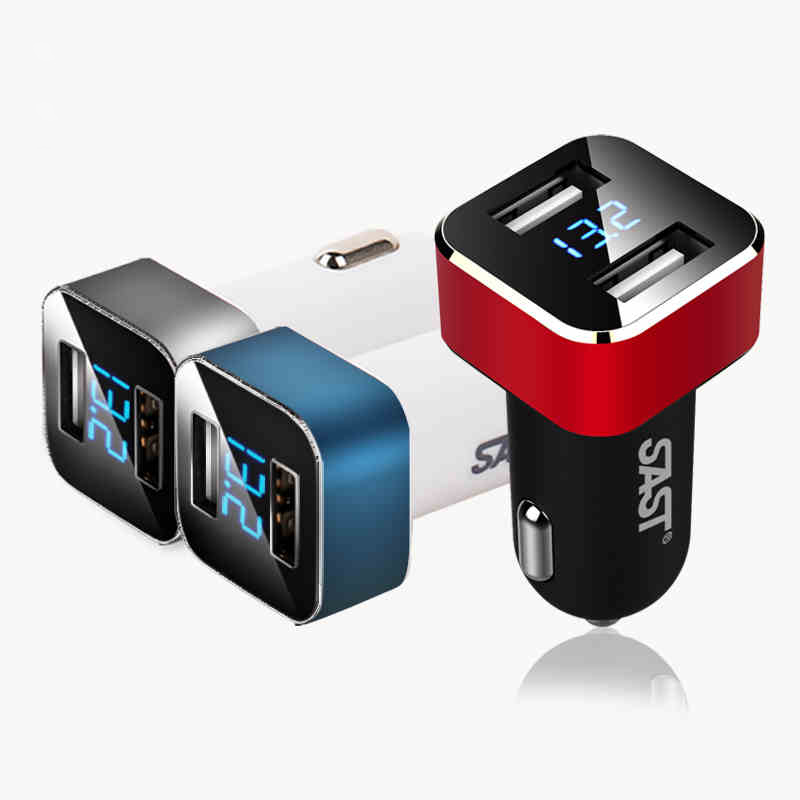 They kill two birds with one stone...
Top

I find that on the Lada that the voltage will float happily on the "full charge" 14V or so at all times anywhere over idle - but if you've got headlights, heater blower and rear window heater all on it will drop down to 12 or 13V at idle, so in slow traffic in the winter you might need to keep an eye on the charge. Granted, it's got a massively over-sized battery for the engine...And from memory the alternator is rated at 60A.

Admittedly I've never checked how accurate the voltmeter on the dash is..
Top

Zelandeth wrote: Admittedly I've never checked how accurate the voltmeter on the dash is..

Those restricted range voltmeters are often quite accurate Zel...
Top

Looks like you're right Jim. Just did a quick test and got the following data.

Here's full-load (main beam, heater blower on full, rear fogs on and rear window heater on) at idle just after a cold start - idle admittedly is a bit slow as well.

Voltmeter on the dash says this: 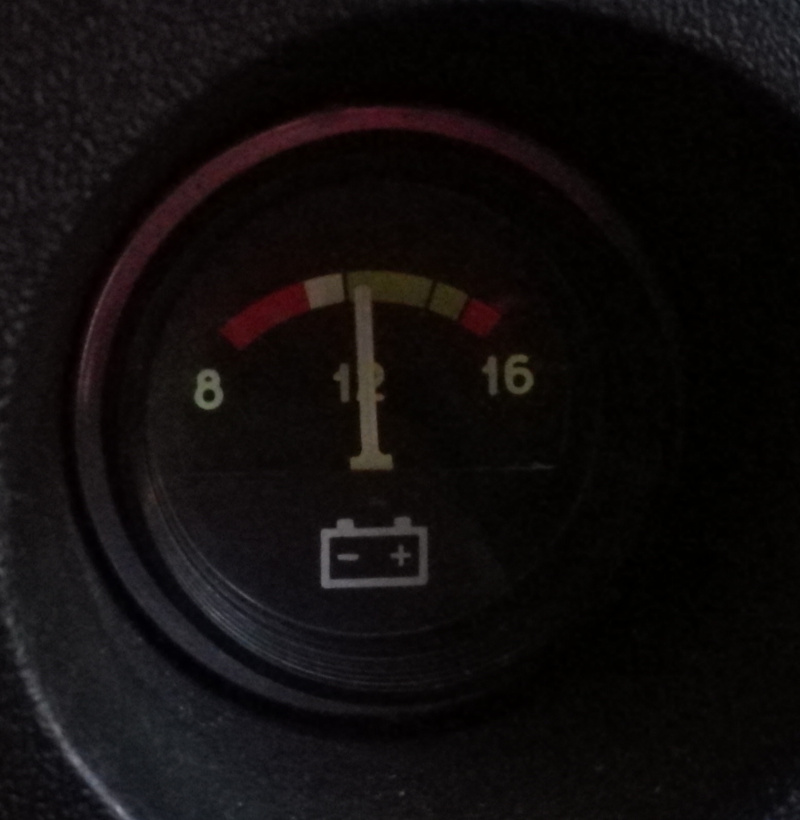 Multimeter on the battery shows 12.28V - so pretty close.

Same load with the engine brought up to anywhere above idle and it jumps straight up to here: 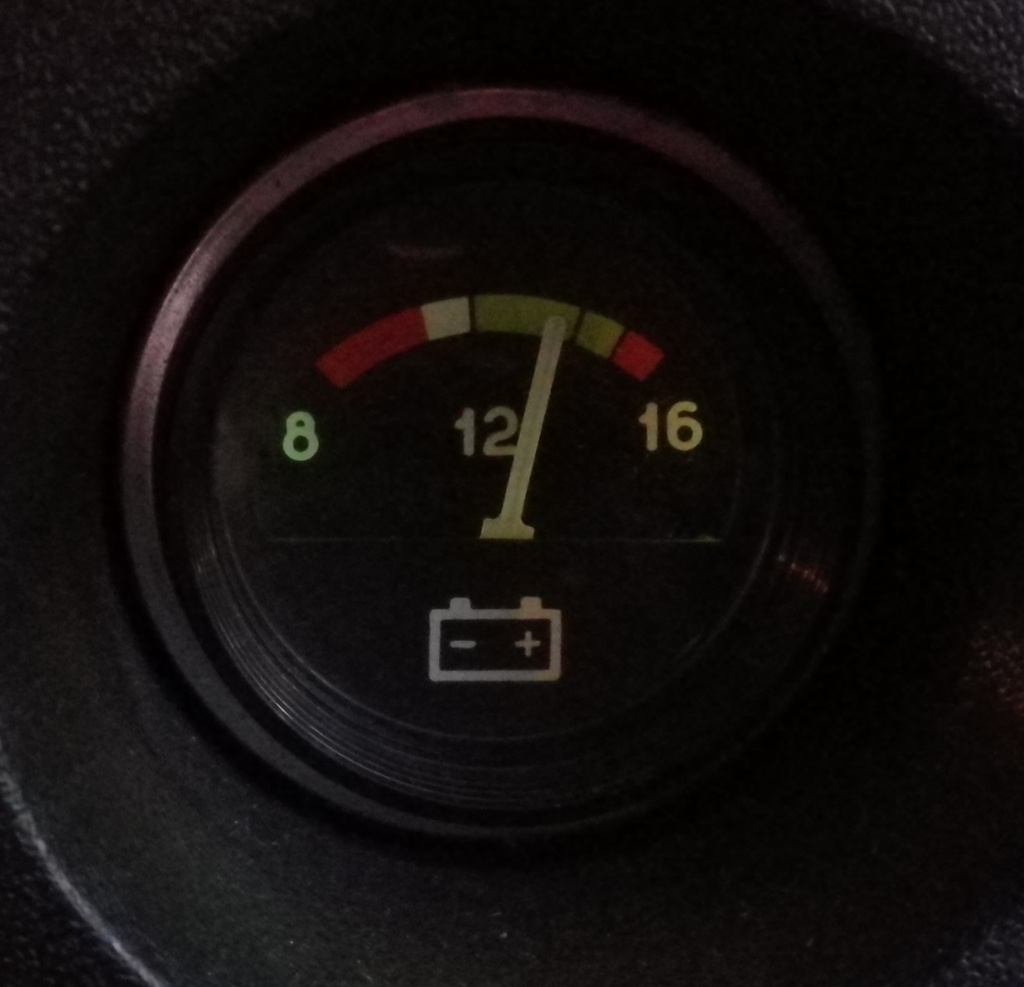 Which reads as 13.93V according to my meter on the battery. Off-load it's a steady 14.2V, and sitting right on the black mark in the green zone on the voltmeter, which is obviously intended to signify "normal." It's a bit hard to come up with precise measurements on a non-calibrated instrument like this, but it seems at least functionally pretty accurate.

I was always taught when I was at the garage that it takes on average of 20-30 minutes of normal driving in most cars to recoup the charge used from the battery to start the engine, not sure how accurate this might be these days with the ridiculous outputs available from some alternators - especially with cars now commonly being equipped with AGM batteries which can accept charge much faster than conventional ones. Not sure where stop-start technology plays in there either...
Top

At least you can put a lot of faith in the gauge now!


Zelandeth wrote: I was always taught when I was at the garage that it takes on average of 20-30 minutes of normal driving in most cars to recoup the charge used from the battery to start the engine, not sure how accurate this might be these days with the ridiculous outputs available from some alternators

My experience with my Activa, which does very little and is therefore subject to a weekly run, sometimes not actually moving, suggests that around 10 minutes of idle with no additional load is adequate to to keep the battery happy.

After doing the load test yesterday it appeared to take only about two or three minutes to get back to normal once the load was removed...

So, on that basis, I'd say that your estimate, given reasonable revs and a good drive, was a little on the conservative side...
Top