As decently-equipped as I am, I think I draw the line on a wheel-balancing machine here

We've got five vehicles here at home (and one in storage) and two of them have two sets of wheels and tyres, so I looked into it and worked out I could save quite a bit by getting an old non-working Bradbury wheel balancer, getting it working again, then buying my tyres online and fitting and balancing them up here. Sadly I've no need for a centreless adapter....... but I am tempted with a motorcycle wheel adapter

He did find a Real Problem. Some Past Bodger tried some Mole Grips on the spanner hex and mullered* it completely. A swift Google revealed that he needed an 8mm Allen Key was needed. Might have been netter had he turned the blasted key the correct way to loosen the plug. Oooooooh, that brought tears to my eyes! Then enlightenment dawned and he tried it the other way.

He only woke up to my needing an oil change after noticing sludge on my dipstick. Two goes with Granville Engine Flush in my sump soon sorted that out.

I've been taking my Greyhound for Walks and it looks like we may be going back to Moseley Old Hall again, finally. H's had one vaccination and been booked for his 2nd next Friday.

Oh, and I expect a new Sump Plug next time!

* that is what I think the word he used meant. He also questioned the parentage of said Bodger!!

** this is what Lily the Greyhound calls him!
Top

He only woke up to my needing an oil change after noticing sludge on my dipstick. Two goes with Granville Engine Flush in my sump soon sorted that out.

Wanton neglect I call that

I'd not let him get away with that again... You need your fresh oil like he needs a beer and make sure you get it

Still, the Old Fool finally remembered. I worry about him sometimes.....
Top

I have had a small oil leak for a long time now just to keep the Old Fool on his toes. He has checked all my oil connections, all my hydraulic connections and, in desperation, my coolant hoses. Nope, they're all dry. So where was it from?

He found it today, i had partially spat the feed to my fuel filter off and he finally spotted it. He pressed in the white tab and tried to push the hose home. No dice, so he tapped it in with a big spanner. Not only am I now oil tight but a strange whistling sound that has puzzled him for a while has disappeared!

He doesn't smile much - grim Yorkshireman and all that. I lived in Dewsbury, his home town, for a while. Grim place.....

Papa had to call the RAC on Monday. He had taken me to ATS to arrange for my aircon to be regassed and on his way home he stopped to buy milk and a few other things. When he got back, I sulked and REFUSED to start. He nice man from the RAC arrived only half an hour later and put a clever tool onto my battery which diagnosed the battery as knackered. So much for te Old Fool's theory of glow plugs!

My new battery arrived today and the Old Twit fitted it. I now start much more easily.

The Old Twit took me to have my powerful air con fixed today. He has been sneezing a lot with my windows open but I can now blow cold air to him.

While there, the mechanic was struggling to undo the pipes from his machine so Papa raised my suspension. The chaps had never seen anything like it! He's also wiped down my powerful engine so I look nice when he opens my sleek bonnet.

I am a very excited girl tonight.

Papa bathed me last night because I was COVERED in tree sap and that's nasty sticky stuff. Always nice to have a shower and look my best, you never know who you'll meet,

Anyway, today after Lily's Morning Walk, the Old Fool loaded 4 repainted alloy wheels into my boot and ATS Wolverhampton were able to balance them! Don't they look good? I reckon Papa has don a good job repainting them.

Papa has looked at the old rear tyres because he was thinking of using one of them as my new spare but found that they are a blowout waiting to happen. The tyre has cracked round the vase of the tread blocks. He went rather pale! He will instead choose the least worn of my old fronts as a spare.

In case you are wondering what he will do with the old tyres, he likes to use them to support me while working beneath me. He reckons they're safer tha axle stands although he does use them as well. Belt and braces? It is what my Grandpapa taught him. As well as leaving him his BIG hammer when Grandpapa died before I was a gleam in the designer's eye.

We have also been to the Dudley Greyhound Trust. As you know, I love my hound and my people love her to so they decided to help out. The Trust need people to walk the hounds. They like greyhounds so no worries. They take one and Lily for a short walk then bring them back. Th Trust are trying to persuade Maman et Papa to foster a nervous hound but they are not sure. Lily has been very clingy since they got back and she has had some bad dreams. I do hope she did not think they were trading her in!! She is settling back in though but I o worry about Lily. She is very good at keeping Papa happy and has taken on the role left by Tigger.

Papa is Not A Happy Bunny.

When he last changed my fuel filter before Lock Down he bought a new housing with filter already fitted, thinking it would be easier and so it proved. Oh, if only the Old Fool had put the inlet pipe on properly he would have found out today's discovery much earlier.

He bought a Service Kit (oil, oil filter, air filter and fuel filter) and did all but the fuel filter earlier. Well, this afternoon he decided to see if changing my fuel filter would cure a little dribble of yummy diesel that runs down my powerful engine

. It left it damp, rather than wet but still I was dribbling a little food that could have powered me! When he got the top off my fuel filter with some oil filter pliers, the reason for the leak was laid bare. His 1st thought was that was NO seal and that made him mutter a Lot Of Bad Words. Not at me but at the Bad Person* who assembled the filter housing, then he found the rubber seal, compressed beneath the level of the hard plastic housing. More Bad Words and he expressed himself of the opinion that the person who assembled the housing was of dubious parentage*

. The new seal that came with the filter was not only deeper but has an angled shape to match the lid.

I am now not dribbling fuel and running more economically than ever which should please Daddy. Lily has calmed him down nicely which is why I love her. What a nice Hound! And as elegant as a Citroen.....

*. I think that's what he said means

Ali is well at Otterchops Towers. I am still dry down the front of my Powerful Engine and more frugal with diesel than ever. I like my new tyres and wheels and much prefer them to the old steelies despite what the Old Fool calls the "Sixties Rally Look."

After a break for Papa and Maman's Anniversary we are back walking hounds for the Greyhound Trust. It is doing Lily a lot of good, meeting other hounds. She is becoming more confident and shows more timid hounds just how much fun a Walk with Papa and Mamam is. With my Powerful Air Conditioning blasting cold air, it is comfy for her although yesterday sh did get overhot walking. I know the feeling. My radiator fan was working overtime!

The Old Fool is now waiting for something to go wrong!

I did steal his phone so he will have some interesting calls on his bill this month. There's this lovely Citroen over at the French embassy in Australia.......

Well, the Old Twit has FINALLY got round to posting a decent pic of me with my nice, new wheels at Moseley. My powerful new battery is starting me wel but my tank fuel pump sometimes does not make proper contact and Daddy says Rude Words. He has been at work on the connection to my fuse box but, though better, it's still not right. Please not the Big Hammer again!!

I'm giving him a workout with my LHS front flasher bulb. That's got him thinking!!

You could always get him to convert you to a gravity feed fuel system with your fuel tank on the roof. You wouldn't be the first Citroen to have such an arrangement 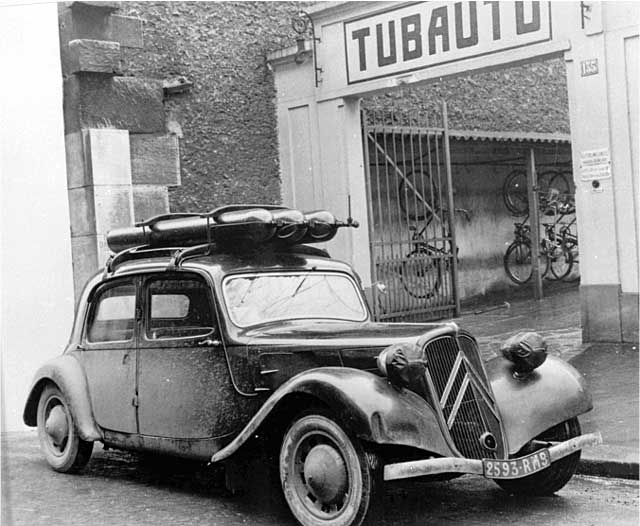 Yes gravity feed is good!! I had it on my Messerschmitt KR200 where the tank was mounted in the engine cowling at the back, Occasionally I let the level drop too much but that just meant getting out, opening the boot and giving it a little shake side to side to get the fuel trapped in the ends into the centre and then you had enough to get to a garage!!
Top

Hmm. Wonder if I could make a streamlined tank?