Well. its really looking like its gonna be "Clutch Time" on my Xantia hdi 110... Theres soooooo much power (

) that clutch slip is easy to do... but at 207k, I cannot complain. Ive no idea if its original, or its second one. Theres currently no tow bar on it, so its never worked hard but I shall be fitting one soon.

Ill try and take some progress pictures.. but with that big bulkier ME gearbox, or is it MA MC MD - oh, MDF? No, wait thats wood...

what ever, Im not as keen as BE clutch changes..
Top

it's not that harder job to be fair, just annoying. ML5 lol
Top

yea i know.. ive done three now.. i just never look forward to a clutch job.. gettin boxs baxk on is always a nightmare the only bit i hate....
Top

getting the box back on is easy Paul, leave the spring plate loose on its bolts, slide the box straight back onto the dowels and stick a bolt in it then do the spring plate up through the slave cylinder hole, sooo simple then.
The first press of the clutch with these pullers is something you do very slowly with cringe!

Well, the first car shell was ready to load onto the trailer to dispose of... but, the first problem, how do you get a shell, with no wheels onto a trailer?? 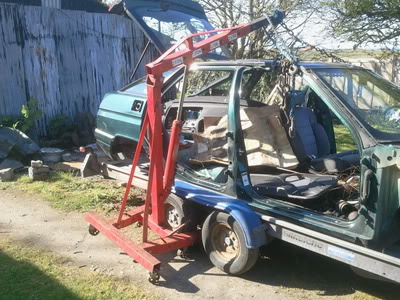 The car was originally on the floor on stands.... So I wondered the shell must only be a ton or less.. My hoist is a 2 ton Max load, with a 7 ton ram.

So I jacked the side of the car up, and got the hoist half under the car.. wrapped a chain around the roof at the front door area and had a go... the car lifted and centralised itself over the hoist! It was air bourne!

I then firstly backed the trailer under the car as far as I could go untill the rear axle met the hoist then let it down. It sat on the edge of the trailer. I then moved the hoist along - forwards - a bit and lifted again, while at the same time attached a ratchet strap to the front so when it was air bourne I wheeld in the strap which moved it forward.. Did this untill we were on fully! 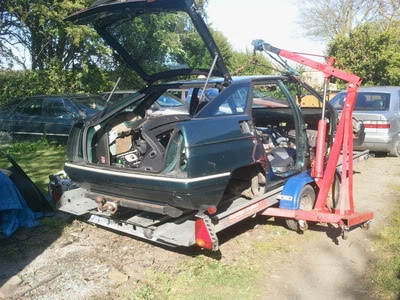 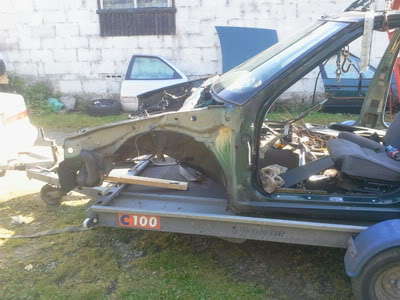 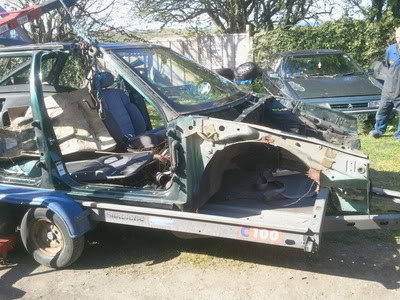 Just need to remove the boot lid and cut the roof out, and load the car with more scrap parts and off we go!
Top

What was this car Paul? Looks like it could have been a S2? What was the reasons for the breaking/scrapping?
Last edited by Citroenmad on 13 May 2012, 11:38, edited 1 time in total.
Top

Take a close look at the front wing mounts... oh.. if you can find them!!

Sill areas were very bad too.. the weight of the car when complete colapsed them like paper mashey...
Top

That is a shame, though you have stripped it well

Was it a diesel?

These rotten S2s must of lived in some very salty seas ... Our 4 S2s showed no structural rot and the current one is very clean on the underside, no falky bits. The white 16v did need a patch welding on the sill but that was because the scuttle drain hole was blocked and for years water would slowly and continuously seep into the NS sill.
Top

You wanna try humping those huge ridiculas lumps around! They are stupidly heavy..

Oh YES, I sure do know how to strip a car properly!

NOTHING of use is left behind. I need to get the boot, bumper and tow bar off to finish.
Top

You dont happen to have a QUIET roof fan do you? The one which sensors the internal temp for the manual climate control?
Top

Ive no idea though which would be quiet and which would be noisy.. Are these the same as Xantia Ones? Ive a HDi SX Xantia to strip next, I dont recall the fan being noisy in that car.. if it still works..
Top

Im not sure if the Xantia one is the same, I should maybe take mine out and compare it.

The on in the XM works fine but its noisey, drives me mad!
Top

I know what you mean chris!! They annoy me too, I get annoyed with any TINY squeek or rattle.. I hate them!
Top

Yes, I am the same, any rattle, squeak or knocking really annoys me and must be sorted as soon as possible.