Deanxm wrote:If the price is right go for it, i did and the price wasnt even that good on mine, once sorted they are just as reliable as any other xant from what ive seen of mine over the last year.

Tis £700, with a a full set of just bought pleiades spheres included, but not fitted. Has MOT until next July, Tax until same.. lot of history. Jim's had a drive in it, reckons it's an essentially sound one.

Pics of my prospective purchase

Did you have to replace the glow plug in the aux heater or did it respond to a cleanup? If you did replace it, was it easy to source a new one?

I have a problem with mine currently not working and need to resolve before too many more overnight freeze ups.

Love the electrically heated seats though !

Yes I did. The old plug was open-circuit. They're available on eBay such as this one or at a better price - they are expensive - from VWspares

There is a rumour that GSF sell them but not having access to their on-line catalogue I can't confirm.

The model of heater is the Hydronic D3WZ.

Replacement is a heater out job but in theory could be done by just dropping the heater on its pipes. The problem is two countersunk screws on the top - they invariably need an impact driver on them. Best though to remove the whole thing and then when the glowplug is out you can use an airline to blow out the combustion chamber.

Hope that gets yours going. If you need any further advice just shout...
Top

CitroJim wrote:There is a rumour that GSF sell them but not having access to their on-line catalogue I can't confirm.

Yes the glowplugs are or at least were as that's where I bought mine from.
Top

tis where i bought mine from, you'll be able to find the part number in Dickie's thread, worked for me, cost me about £20
Top

These Eberspacher heaters sound interesting. I suppose they're no use on a S1 Xantia?
Top

These Eberspacher heaters sound interesting. I suppose they're no use on a S1 Xantia?

Jim does do heater matrix swaps at a very competitive rate, cheaper than me @ £4999.99 per car. That is a lifetime warranty though, if it should fail again he will replace it free of charge.

Lifetime=10 minutes from point of payment.

s1 xantia's don't have HDi engines so have little need for aux heaters. could possibly be retro fitted but little need
Top

I appreciate your kind offer very much and would be happy to do it on the 30th Frebruary or perhaps the 31st April when the weather's a bit better... That Ok with you?
Top

I'll do it from tomorrow overnight and even throw in a free Nissens matrix. The catch is, R has to get the car here at his expense.
Top

addo wrote:I'll do it from tomorrow overnight and even throw in a free Nissens matrix. The catch is, R has to get the car here at his expense.

Can't say fairer than that can you...
Top

Still steeling myself for the 2nd matrix replacement in a month or so. That's the problem with having two Citroens in the household! TWICE THE WORK!
Top

if it is any consolation, I have to do a matrix job on Rattiva but it's not because the matrix is gone but because the heater box itself is damaged following a previous matrix replacement.

I have a feeling there was a rag or something left in the heater box which has broken the flap and totally upset airflow through it.

Changing a matrix is one thing but doing a heater box as well is evil in the extreme... Be thankful you only have to swap a matrix and having practiced on Sylv's ZX, it'll hold no surprises for you

Just don't leave any rags in there...
Top

What's the rag for anyway? To wipe away tears or mop up blood and sweat?
Top

Rhothgar wrote:What's the rag for anyway? To wipe away tears or mop up blood and sweat?

And to mop up any spilled coolant in the bottom of the heater box.

You' may also find solid crystalline deposits in the bottom of the box from a long leaky matrix. I break them up and then stick a Hoover hose in to suck them up.

Then I use a damp rag to finally clean the box. If you don't it might carry on being smelly when the heater is on...

See? It's easy to leave a rag in there

She now has a warm cabin

Firstly though a big thank you to DickieG who came up to help replace the heater box at very short notice today. Thanks Richard, you really are a star

We worked from dawn to dusk on it today with just a short break for me to visit the dentist for Root Canal part II. That's all done now and X-rays confirm it's been a success..

Replacing a heater box is a step on from a matrix replacement but a biggish step. And it's is essential to have two people on it. At one point we wondered if it was possible to even do it without removing the whole heater box but in the end it was just possible

We discovered on our way that the last person to replace the matrix did it with a crowbar, pickaxe and a sledgehammer

One dash bolt pillar was broken, one of the ones that pass through the bulkhead, and there were several cracks in the dash itself along with plenty of evidence of gorilla attacks and assorted bodgery

On easing the old heater box out we were staggered when it came out almost in two. It was split in half. No wonder it was not working very well - most of the air was escaping from the split..

But why was the box split. We found that when the old matrix came out. It was an odd one we've never seen before - black and looking more like a coolant radiator than a matrix and much heavier than the standard one. Basically, due to the design of the bottom end it fouled on the base of the box and the gorilla fitting it gave it a big shove and tightened the securing screws down on it and promptly split the box in half

Goodness only knows what it was designed for

Maybe a CX perhaps or even a BX?

All's well that ends well and Rattiva is certainly warmer than she was..

As a bonus, we replaced all the blown instrument bulbs. I can see how fast I'm going now

Just a few jobs to finish off and all is done.

This is a picture of the old and new matrixes and split heater box. The odd matrix is the one on the right... 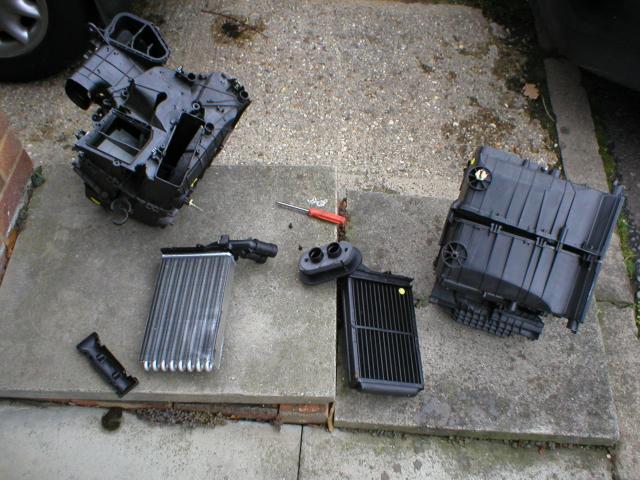 Again, many thanks for today Richard