CitroJim wrote:Not good for the job I do really. maybe I need a standing desk?

Or one of these
Top

Or one of these

Bad luck with the back pains there Jim - sciatica perhaps.
Could it be the long drive in the lorry? My Accord use to kill me for the first couple of months until I got used to the seats.
Top

Mmm ...........you may be doing too much Jim. Full time job and then working on these cars like a 25 yr old. Another cold winter etc etc.You know what I mean

That was me being boringly sensible

Sadly Lexi, you may be absolutely right

Trouble is, I need my project to help relieve stress from work and right now it is extremely stressful. I don't 'do' stress at all well and normally too much stress causes some sort of safety valve to blow off within me and this may be one of them.

Speaking to a good friend this evening she analysed what is going on at work (she works there too) and came to a conclusion that there is too much stress going on and the back may be more a symptom of that rather than being overtly physical in nature.. My own take is that it has a lot to do with sitting at a desk all day; an unnatural existence for me...

The XM is not being rushed so no stress there. I've given myself a year to do what's required of it. Be good if it was up on its wheels for CXM next year...
Top

Funnily enough Jim: My Son having got his degree this summer landed a job in website design 4 weeks ago. A large travel company. He works in a team stuck in a huge basement office. He hates it

Tired at thinking and working at software all day. Actually said he wishes he was out on a roof with me again..........fresh air, freedom and physical work.

The XM does look very nice Jim, no doubt a keeper as its in a similar shade of blue ...

Hope your back gets better soon Jim

lexi wrote: Tired at thinking and working at software all day. Actually said he wishes he was out on a roof with me again..........fresh air, freedom and physical work.

I know that feeling only too well Lexi

You'd never believe just how tiring dealing with software all day kis and how it leaves you so drained...

Many don't understand. "You've been sitting down all day playing with a computer. How can you be exhausted?"

Throw rotten air conditioning into the mix and the situation deteriorates even further...
Top

I can sympathise a little. Our 'office' (cupboard according to the floor plans) is a sectioned off piece of a large early 20th century classroom (one of those tall ones). The section is split on to two levels with a tight spiral staircase in the corner. The upper level is supported by metal structures on either side of the lower office which double up as shelves. It was only recently that we had the downstairs window recommissioned.
One morning I walked into work in the dry but cold weather, received an email from the boss a few hours later sending us all home due to heavy snow. Walked outside into at least half a foot of the stuff

I must count my blessings though as we are regularly called out around the building and if not, we always have a few tasks set aside for when our eyes start going square. Our line manager is very understanding, one of the good ones!
Top

Been out and had a good spanner this evening...

The nosecone is nearly off and the rads are dangling

But by golly, the XM is a bit of a rat's nest electrical-wise. Looks like the ES9 installation in there, unlike the Xantia, was a real Friday afternoon job and the wiring looks like another Stevie Wonder/Ray Charles job.

Got to admit, it's bloody awful

No wonder XMs were prone to the odd electrical issue. No bloody surprise really

As I say, the front is nearly off but the wiring to the rad fans seems to be a deterrent to removing the front completely or am I missing a trick?

The car is in my opinion borderline restorable. It appears very rusty in places and determined to find the extent of the crustiness I unkindly attacked all structural bits with hammers and pointy things and despite lots and lots and lots of surface rust all the structural bits are as sound as a pound.

The coolant rad is a bit suspect. It looks like it's leaking a bit but not so bad as it won't at least do for a bit yet.

I can't see how to avoid depressurising the A/C system as the condenser is going to have to come off to get the engine out or am I again missing a trick?

She looks bad and is bad in places but the general overall condition means the restoration is on for now unless a big showstopper rears it's ugly head.

On the corrosion side of things, I can only assume the whole of Scotland is made of salt if the surface rust is anything to go by. The poor car looks like it's been living in the sea for a few years

Glad to hear that you have made some progress with the car.

The wiring for the fans will undo somewhere along the ways, its not obvious at first, but will appear later.

When I did my conversion, I removed the whole A/C system, its the easiest way, and it will give you more space when lifting the engine out. Although some people will pull the A/C rad over to the passengers side to give clearance.

Xms can rust a bit at the front end, the most common place is the support brace that runs behind the front bumper, not the end of the world, other front end rust is the brackets where the wings and bumpers mount to.

Its not uncommon for late Xms to need a bit of welding, but re-application of gravitex will keep any more rot at bay for a while.
Top

Sounds like your having fun Jim with the Xm , for your rust issues give this a try , apparently very good stuff http://www.bilthamber.com/deoxgel.html

I couldnt find anywhere to undo the rad fan wiring so just let the front but hang loose!.
Sounds like the angle grinder is called for to clean back the rust!
Whilst the front is off make sure to clean and protect the metal bumber insert, as robert sais, I have seen what happens when there is nothing left.
Whilst the front end was off I did the front crossmember as this was rusted I assume due to moisture from the air con and heat from the rads.
Dave
Top 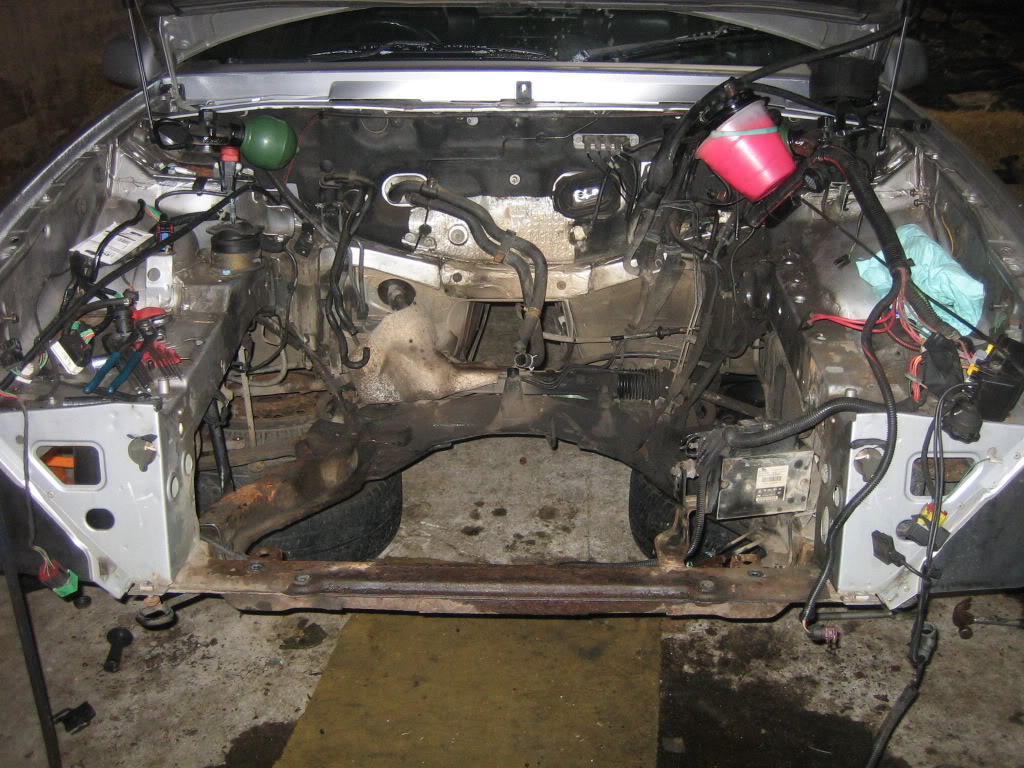 I can't remember for sure, but you need to undo the fusebox leads. I got the front of mine complete with no problems.[/img]
Top

Unless it changed for the ES9 implant, Jim should be able to take off the nosecone like a 605 - complete with headlights, air horn and fans. There's only a few wiring plugs to disconnect.

Anyhow, seeing as you're nine-tenths into doing it the hard way, here's the fan disconnect details:

Flick off the two metal U clips (watch where they go!) and then prise open the plug flip cover above. Then there's a right-angled plug you wiggle back out. Once this is done, the wiring ought be off fully.

Here's my muddy one recently:

I took the nose off mine without disconnecting the wiring direct to the fans. 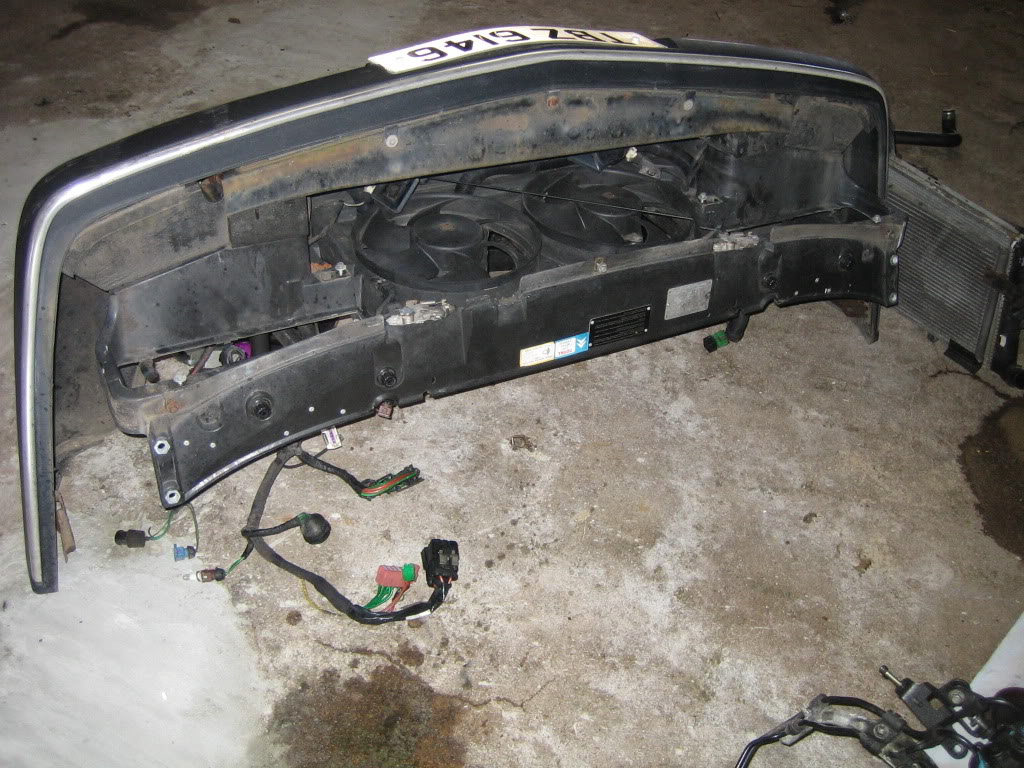 Hopefully that will show some clues, I think the relay wiring is there too.
Top
Messages: 61