I'll go with that then! Yes Renault and Volvo have had a little relationship going...I remember the Safrane having a Volvo engine

Thanks Robert, you'll have to have a blast in it

Bring it down, you have to get a shot in the CX.
Top

Very nice looking little Volvo 440 Luke, the interior looks almost like new! Obviously had a bit of a 'touch' parking owner at some point, going by its bumpers

I say you have done well buying that, there doesnt look like there is much needed to get it about perfect and its mileage is very low. Have you decided about keeping it for a bit or is it for a quick sale?

AH, so that ticking is a Volvo thing! I wondered what that ticking was at first, I initially thought it was a relay had gone faulty and that it would soon become annoying, but then noticed the flashing sign on the roof panel alerting me to the seatbelt - I had not actually got out of the drive.

I do like Volvos, especially after spending a bit of time driving this V40 this evening, i really like it! I didnt actually want to stop driving it, so i kept on going. Its not a fantastic drive but its not bad and it has something about it. I also like some of the little touches you dont often find in cars, rear wiper has an on and intermittent setting, radio has a cd player and a cassette too. I like the dash and its odd but logical placing of things. I could get quite used to Volvos!

I thought it would be a V70 we were getting, but ive always had a bit of a liking to the S40/V40, so im pretty pleased ive experienced one now.
Top

Thanks Chris. Keeping all depends on the amount of money that will need spent on it for MOT. If it goes through with just the test fee spent on it, the car owes me £200, and having put nearly 200 miles on it now, it's worth a lot more to me

Glad to hear you're enjoying your Volvo, despite it not being a big beast like a V70 or an S80. I replied to your blog. Ticking of the seatbelt reminder is enough to send you into a mental home.

Well after four months, the Mégane's dash is free from warning lights and messages (with the exception of the standard "Check tyre pressure"), and running better than ever. The fault causing the CHECK INJECTION messages, rough idling and poor starting and fuel economy was a combination of perished wiring around the engine bay and a failed map sensor. So glad to have it back, hope we get sun tomorrow for the windows down and sunroof open

Ohhhh and possible Citroen C3 Pluriel purchase tomorrow in work for my mum. Depending on the overall condition once I check it out fully tomorrow, and the price. 2003 model with 52,000 miles with the dreaded Sensodrive handicap. Repossession lifted straight from the owner's driveway (hence the crook lock still in place). Views on this oddball of a car are welcome. Future classic? Robert and I were just discussing this... I'm not so sure. 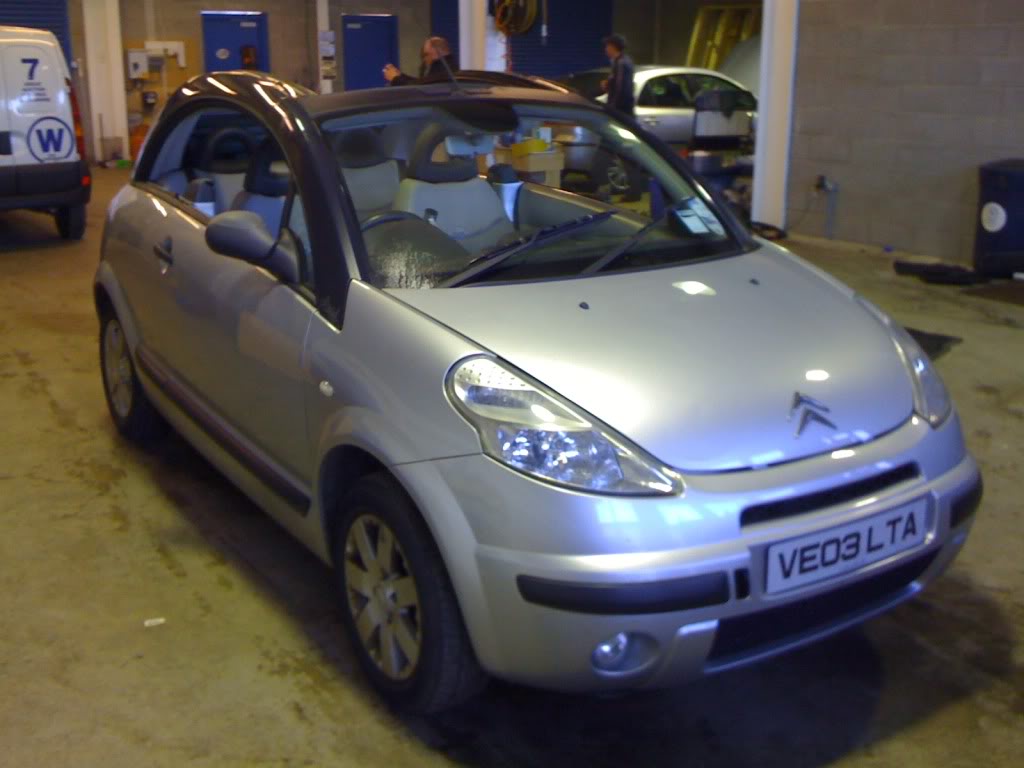 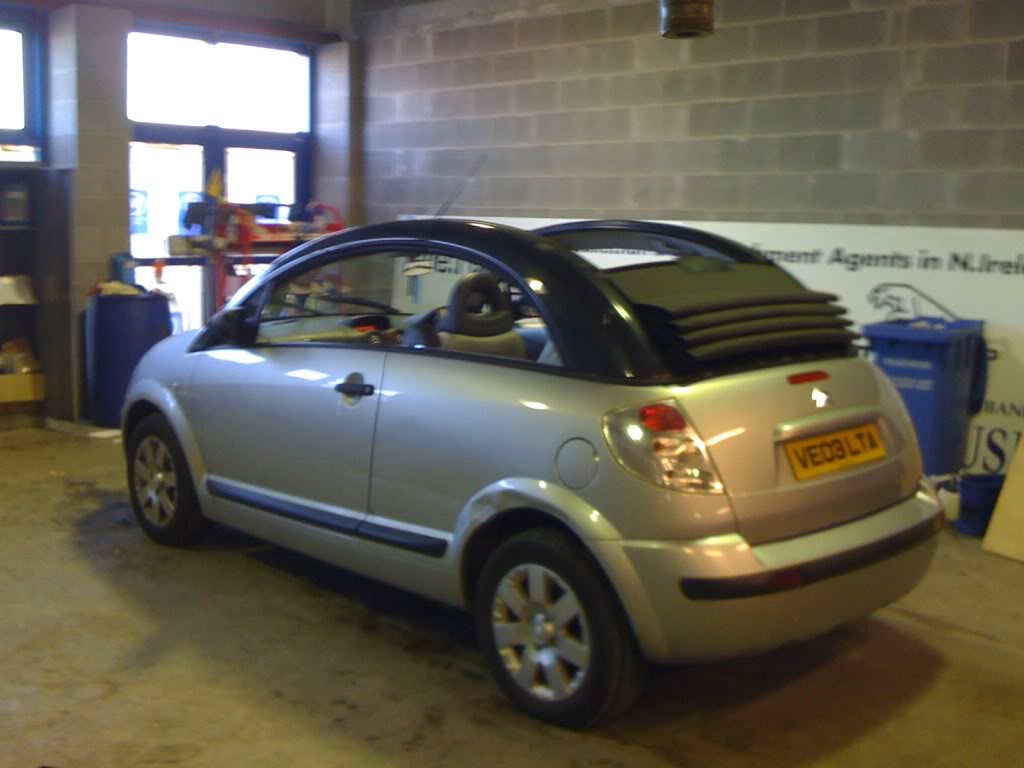 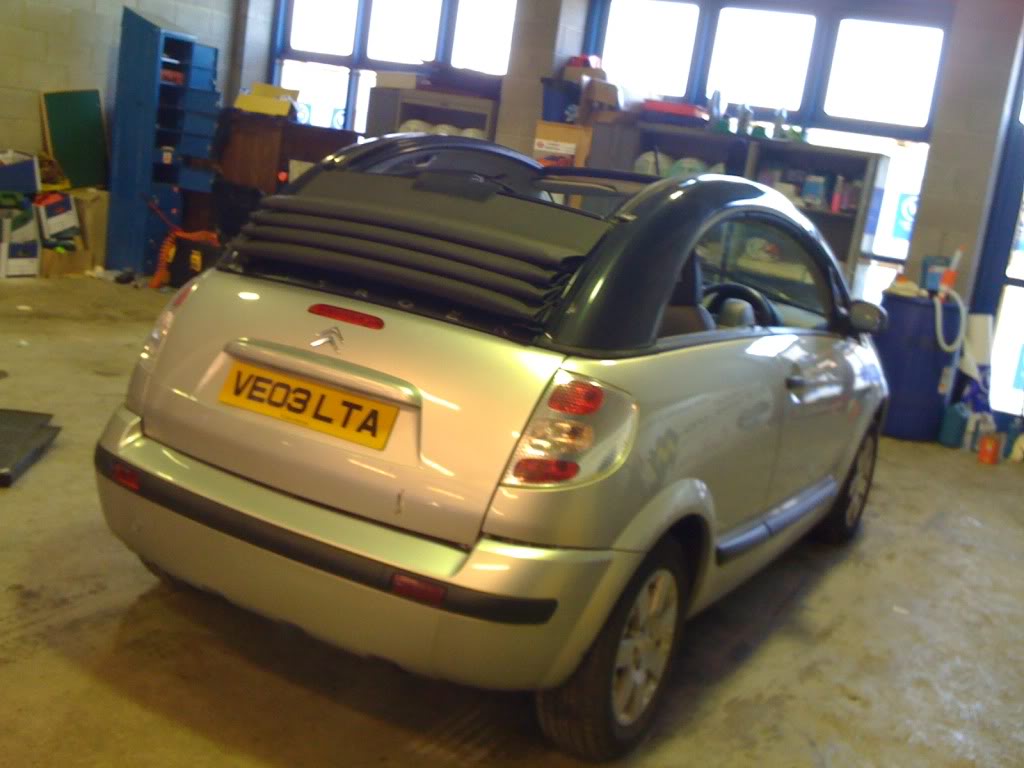 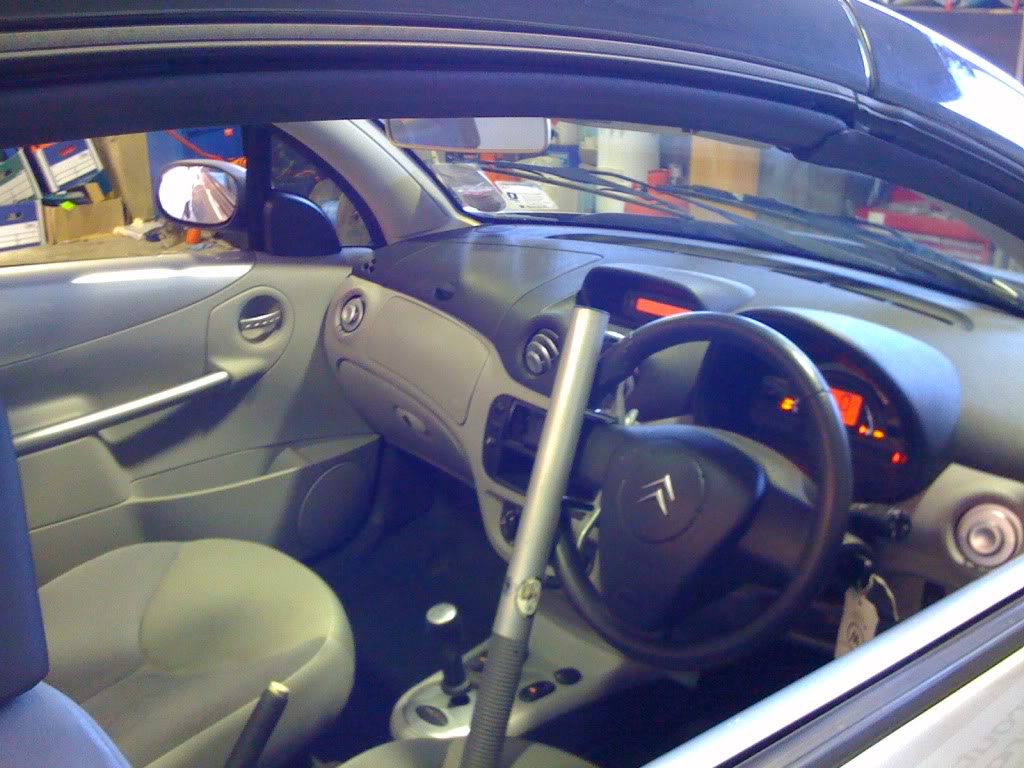 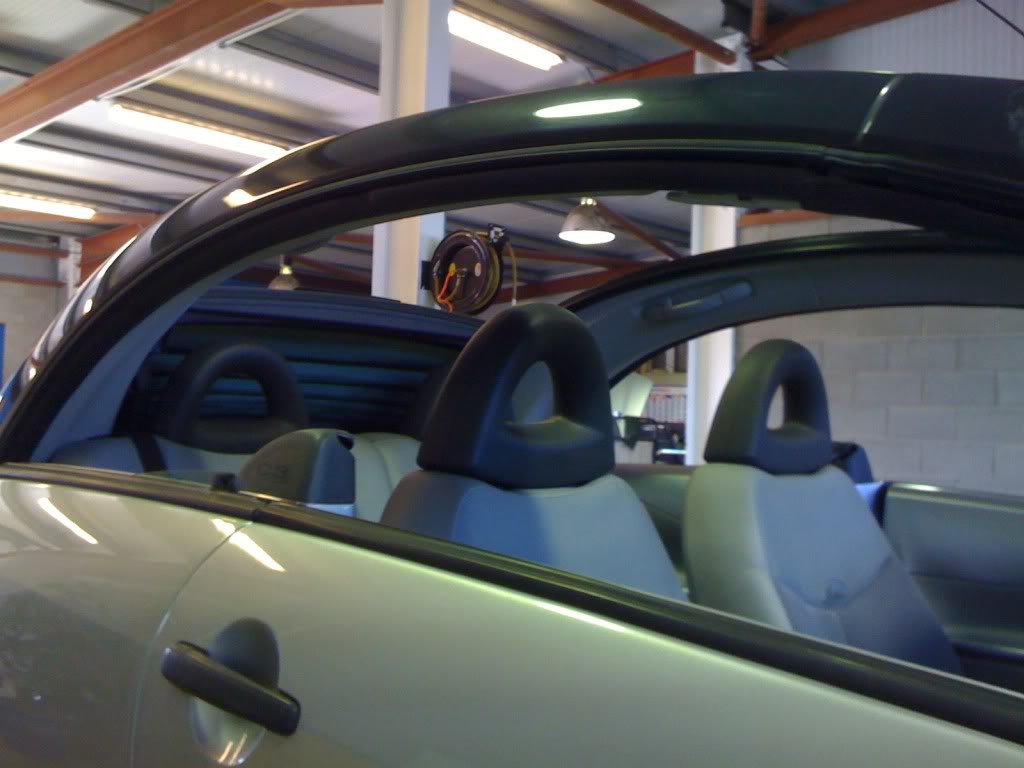 Citroen Pleurisy, known for leaks aren't they?
I remember a year or so ago someone was asking about them and were advised basically not to bother.

Good news with the Megane Luke, working as well as it should again, and your back driving it?

How do you go about getting the crook lock off the Pluriel? I guess the car has no keys either? Will those be obtained or sold as is?

Im unsure about the C3 Pluriel, I do quite like them, quite innovative but then how well do each of its so called body styles work? They seem a bit flimsy and I too have heard of leaks. The 1.6 16v petrol seems quite reliable and the box isnt usually too much of a problem, as long as the software updates have been done.

You might well find that one at an irresistible price and in that case I would buy it. Just to experience what they are like if nothing else ... Looks to have quite a dented wheel arch, will it come with any service record as the owners might keep that?

Future classic, im not sure, if i had to make a decision id say no. However im often wrong about many things, so it could well make classic status at some point, if any survive that long.

Xac wrote:Citroën Pleurisy, known for leaks aren't they?
I remember a year or so ago someone was asking about them and were advised basically not to bother.

This is why I love this forum. Thank you for that link. I really don't know much at all about the Pluriel, and had no idea about the leaks (although I should have applied some logic). Being in the car briefly today, it smelt damp, but all these repos usually do as they sit for a good while before they arrive for auction, and become mouldy inside. I will give it a good going over tomorrow, but looking at how the roof folds, I'm not surprised they leak.

Yep back driving the Meg, Chris. It's like my first days with it all over again!

With regards to keys. None of the repos come with keys for obvious reasons, but keys are made for them before auction. Unfortunately they do it cheaply, and it's not a remote key (something that would have to be addressed). The crook lock will be removed by our master on site mechanic / handy man tomorrow (rather him than me). No service history or books in the car, but the service reminder isn't up on the dash.

Will keep you updated, thanks again guys.
Top

My observations were lacking there, there is a key in the ignition!

My observations were lacking there, there is a key in the ignition!

Had a good going over it at lunchtime today. The sensodrive gearbox is horrid at the best of times, but this one seemed EVEN more jerky and slow, perhaps it's missed a few software upgrades? The key is not remote, and stupidly, only the passenger door can be locked without it. The handbrake was absolutely useless, felt like the cable had snapped. There was an odd metallic noise coming from the back axle when the car started moving? And to top it all off... a very damp boot floor.

The search continues for a nice french auto for mum.... Clio Initiale?

£1500 does seem a bit of a bargain, but then that dent will be a good few hundred to get sorted out, then the key, a full service, cambelt etc. Could well end up being an expensive car if things were done right.

A French automatic in quite a small car, that is difficult.

It almost rules out Citroens and Peugeots, as most have the senso-drive gearbox. There are some with full autos, the 1.4 C3 could be had with a fully automatic gearbox for example.

Im guessing your leaning towards a Renault .... if its a Clio are you menaing the bigger and newer version? The previous Clio (which turned into the Clio Campus) seems quite a dated and cramped little thing now, but then ive never been much of a fan of that car, mainly because I dont get along with its driving position.

I do know of a little French car with a 1.6 and sensordrive, ingenious doors too. The way its going you can just take it away, save it from the matches

What about a Modus automatic? Nice cars and good value ...
Top

Haha I've tried going down the 1007 route with her before, and despite it being an absolutely excellent deal, she couldn't come round to the looks and said she's feel like she had a disability everytime she got out of it!

It's the same kind of story with the Renault Modus. Despite being a really good little package, they're driven by old people and mum doesn't like the look of it either.

The old or new shape Clio. To be honest.... I'm leaning towards the older shape! She very nearly bought a Clio when she was buying last time, but the 206 was a better deal. I'd love to see her in an '03 Clio Initiale 1.6 Auto - Mainly because I'd like to borrow it from time to time! Small little car with full leather, climate control and xenon headlights. So rare though.

Or I'm also thinking of this as a possible option: 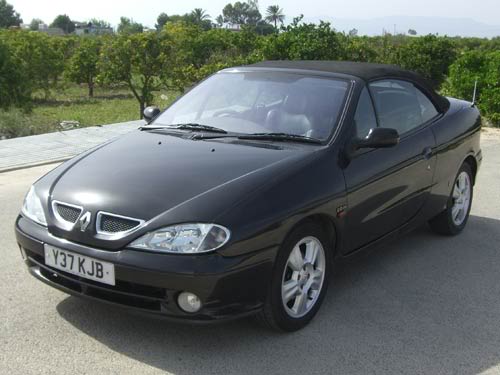 They're such smart looking cars. Yes - she's be buying an older car, but I think if I found her a Privilège 1.6 Auto with black leather she'd be very tempted indeed....

But it's a not a priority at all, she's not making a point of looking for a car. It will be a case of me bringing it home and saying "here it is". So I'm just waiting for the perfect candidate to turn up at Wilsons Auctions

Chris will recognise the car I hope!