To be honest you shouldn't feel much if any judder as the clutches are hydraulic on them.. Did it run right or feel off pace at all?

I only ask as I hammered one to london and back last year in a day with 2hrs of loading kit up and it felt ok, if a little gutless at warp speed for a diesel but it was the 1.6 and with a loaded estate car I didnt expect to hit super speeds but it kept the needle on the right side of the dash most of the time and returned circa 40mpg although I did have an escort on the trip so the speed wasn't a problem

KP wrote:I'd maybe avoid the turbo cars and pop for a 5door meg with all the toys

Probably very wise advice. Hearing of more and more 2.0Ts going down the same road as the dCis

Joyrider mode is for my 92 Clio. If you don't rev the sh*t out of it, the gearbox slips and it goes nowhere!

Seriously though, that's one thing I can say. The 2.0 TDi 140 is quick. Or maybe it's just because I've become used to my Clio Auto. Of course, the power is delivered in the typical diesel fashion that I hate... nothing.........nothing.... turbo kicks in WOOAAAAH. The vibration through the clutch is at idle when the clutch is in. The car only has 1900 miles on it, so I'd say it's just because it's a devilish diesel.

I'm impressed with the quality of it. It's too Germanic but little touches are nice. A little display that shows what gear you're in, and lights that come on when you unlock it if it's dark. And of course, that party trick of a boot. Works well, if a little pointless. 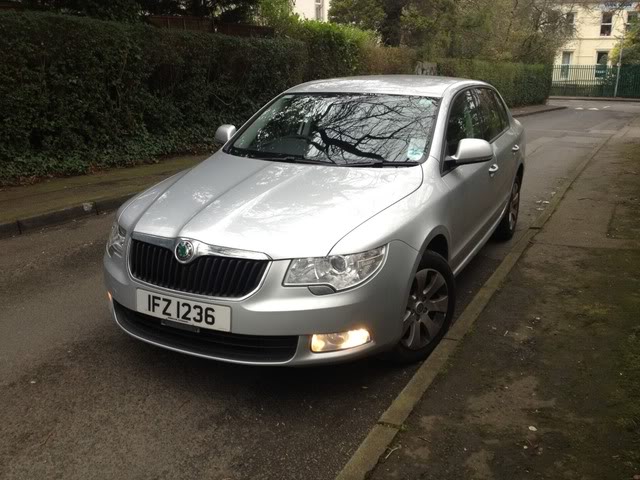 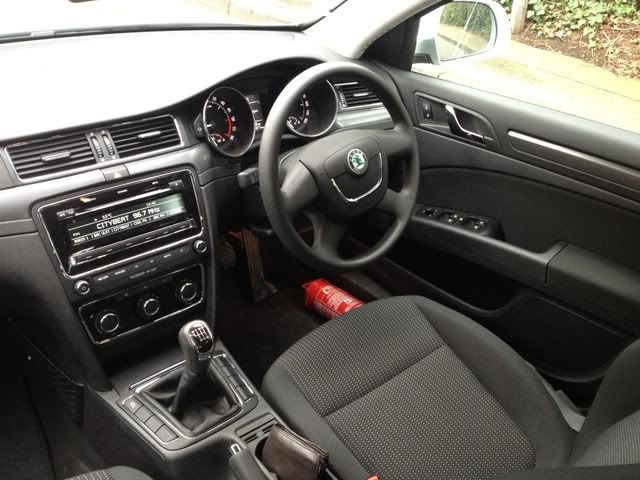 What's the boot trick Luke?
I hear that on the new Mercedes, you wave your hand (or foot, presumably) under the rear bumper and the boot opens.
Top

myglaren wrote:What's the boot trick Luke?
I hear that on the new Mercedes, you wave your hand (or foot, presumably) under the rear bumper and the boot opens.

Well this Superb can be either a saloon or a hatchback: 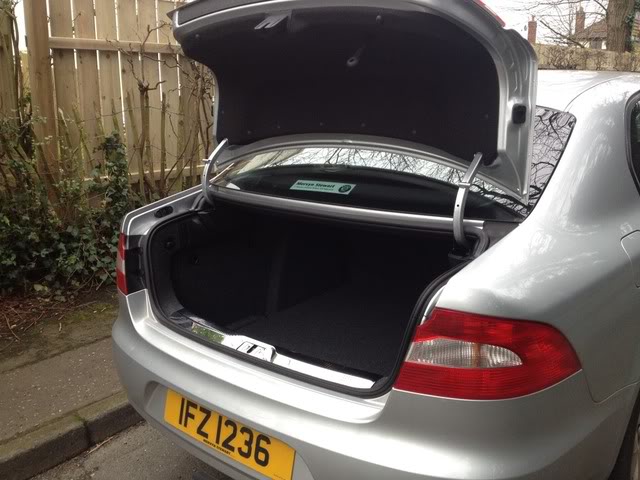 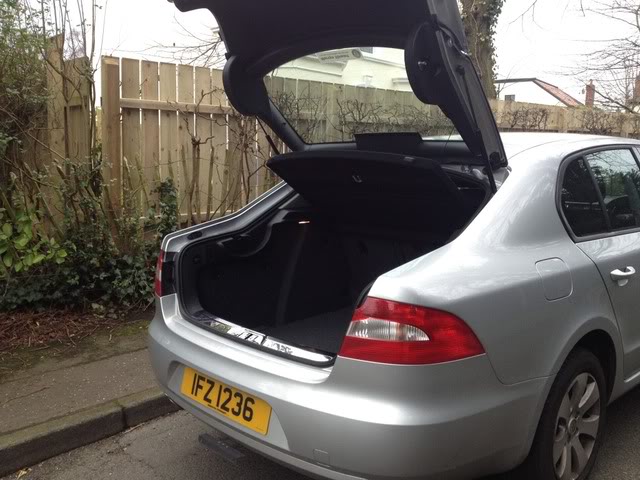 I'm glad you mention that as I found the same thing on Audi A6 3.0 Quattro's I used to drive at work and hated it with a vengeance yet when I mentioned it to colleagues they just shrugged their shoulders and said they hadn't noticed it, quite how was beyond me

For the benefit of people who haven't experienced it, when you press on the clutch pedal it vibrates as if the pedal is pressing a metal rod against the engine block and transmitting every engine vibration through the clutch pedal which on an idling diesel is very unpleasant. At first it's annoying but if you are stuck in traffic and filtering I found that it made my left foot become slightly numb, not quite what you'd expect to find as a standard 'feature' on new Audi's costing almost £40k.
Top

Does the vibration get any better when the engine is warm? Can you feel it when you feet are resting on the footwell floor at all??

The Skodas arent bad cars, my uncle in Dundonald went from a 1.6 alfa 147 to an Octavia 1.4TSi which he really likes and gets OKish MPG from but doesnt do mega miles at a steady speed other than jaunts across the sea and channel to france every now and again

KP wrote:Does the vibration get any better when the engine is warm? Can you feel it when you feet are resting on the footwell floor at all??

I'd describe the vibration through the clutch pedal in more detail as a zinging if that makes sense. In my own experience this wasn't just one high mileage/old car but three brand new one's, I certainly couldn't put up with it if it was my own car, I'd have to sell it.
Top

The thing is that 4cyl DI diesels are not smooth engines by nature.
I think it may be these vibrations that kill the DMF's in many cars.

In old Landrovers you can mate a 200tdi to the old 1950's Series gearbox. Many are killed by this conversion due to the vibration from that lump.
Yet the box is happier with a smooth V8 and more power which is kinder on clutch and box.
The best diesels are straight sixes I think.
Top

lexi wrote:The thing is that 4cyl DI diesels are not smooth engines by nature.
I think it may be these vibrations that kill the DMF's in many cars.

In old Landrovers you can mate a 200tdi to the old 1950's Series gearbox. Many are killed by this conversion due to the vibration from that lump.
Yet the box is happier with a smooth V8 and more power which is kinder on clutch and box.
The best diesels are straight sixes I think.

DickieG described it perfectly. That's exactly what it is - like a metal rod with one end sitting on the clutch and the other on the engine block. It's not nice at all.

He went from an Alfa to a Skoda!? Not exactly natural progression! I'd love a 147 in a nice spec.

I've been thinking about the car choice. I think the wisest thing to do is get a 2.0 Avantime, and sell my V6. Therefore I'll have a more usable Avantime and funds for a Vel or Meg as well. But my mind does change like the weather....

Yet that is in theory smoother than straight 4 or v6. Only S6 diesels I had were Patrols. IDI old style truck motor.
No vibration. Do those VAG 6's have servo clutch? Patrol had that.
Last edited by lexi on 26 Feb 2012, 16:58, edited 1 time in total.
Top

Well i have a i6 Diesel but no clutch

Shame you didn't like the Superb Luke, they have the potential to be a car I might of liked should I give one a try. The clutch sounds odd, I know some VWs have a problem with the clutch, I think the slave cylinder. I drove a Bora TDi highline which had a constant vibrating clutch pedal, though that was put down to the cylinder fault and not due to crappy build quality, well ... Its true though, VAG cars are not well built and should not get the good reliability record which they seem to have following them. Im pretty dissapointed with recent VAG cars.

We have a 1.9TDi Audi A4 Quattro in the family, that is like a truck to drive. As soon as you start it up everything is vibrating, you can feel the engine through the seats! The clutch also vibrates, its just a very gruff and grumbly car to use, especially around town. A world apart from my HDi C5, which feels more like a petrol after driving the Audi. Its also nbot very reliable and costs a fortune to keep going, currently needs new front wings due to rust and a new power steering pump, again! Best stick to French cars

Could it be that your too in love with Meganes to give anything else a chance? I don't mean the Superb but other cars? I know I get like this, while I do like other cars I can't think of a better all rounder for me than a C5. Though its probably more like I couldnt see myself without one now

However I know there are better cars or just cars I would like as much, if I gave them a chance. I can understand where your coming from though and if something happened to my C5 I'd probably be out looking for another.

Why would you want another Avantime? Surely one is enough and you already have the best one!

There are many many cars out there, surely something else must suit you? When im looking for another car I go through a few car mags, older and newer, and make a list of what I might like. Might help!
Top
Messages: 1398