R9UKE wrote:Well it's being sorted through the insurers. They are to get in touch with me tomorrow to sort out a courtesy car etc. Told them I don't want it as it will no doubt be some Korean diesel, and I'm perfectly fine with my Scénic for the time being. They seem to be adamant that I'm having it though.

Just a scam to make them more money.
Top

Tell them to beat it with their courtesy car.

The Citroens would pick on the Renault Jim!

Hopefully the ball will start rolling tomorrow, I can't take much more of seeing it sat like that....

Or, can't you and Robert work out something together for car storage?

And log on to ebay to find bits of my car slowly being removed and flogged? No thanks

I doubt Robert would approve of Renaults ruining his landscape, especially petrol ones! No seriously, he's a bit too far away

It sounds more like a claims handling company than insurer if thy are forcing a hire car on you. Just reject it if it turns up.

My last one, a range rover sport drug dealer edition, I knew cost £80 a day to hire. He company billed it at more than £200!!! I was glad I didn't sign the new style of credit paper as I they fail to recoup or agree the cost with the guilty parties insurer they can send the bill to you instead!! Shocking trend with insurance of late

Glad the Volvo will help others live on before becoming a Heinz tin!!
Top

Or, can't you and Robert work out something together for car storage?

And log on to ebay to find bits of my car slowly being removed and flogged? No thanks

I doubt Robert would approve of Renaults ruining his landscape, especially petrol ones! No seriously, he's a bit too far away

KP I'd be more than happy to accept a Range Rover! I just know it'll be a Hyundai i30 or a Golf or some other dull hatchback. I have an appointment with the body shop tomorrow. Gotta take the Mégane down and they're going to assess and photograph it. Then... if it can be economically repaired, book it in for repair.

Something happened up at auction today that I know will make you all laugh as it did me. The trade ins are all lined up as they come in and put through the auto wash. The cars are often left running as they're getting washed. Anyway, as I was having a drive in this.... 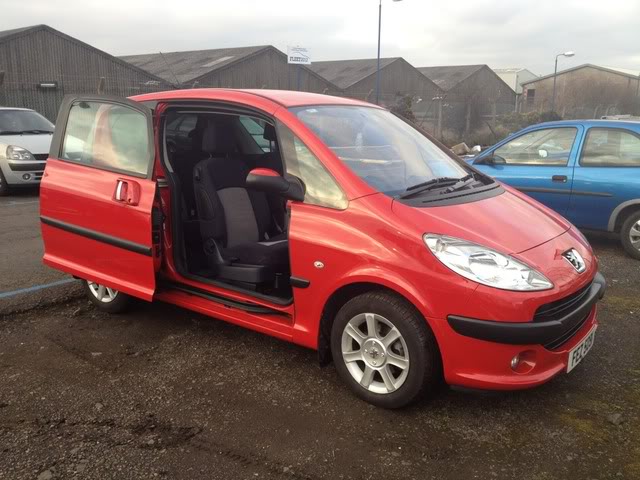 ..... I noticed an usual amount of steam coming from around the wash as it was running. On closer inspection it seemed this steam was actually smoke. And it was coming from the car that was being washed. The result? 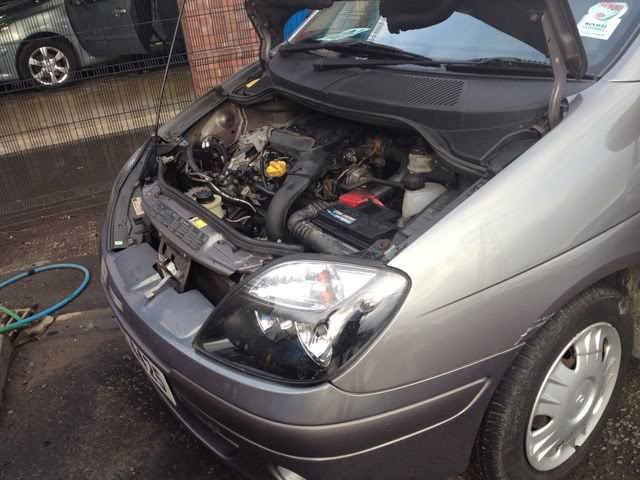 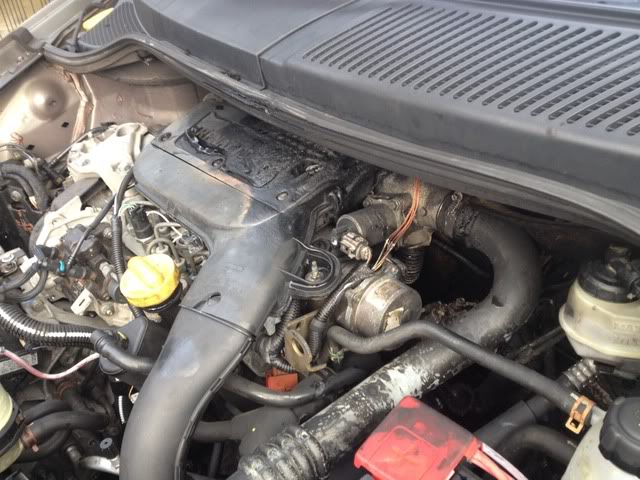 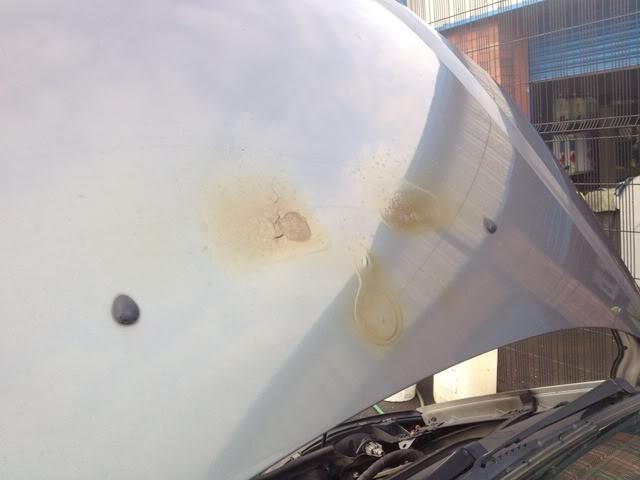 ... and what engine was in this piece of fine French machinery? Yep... you guessed it!! 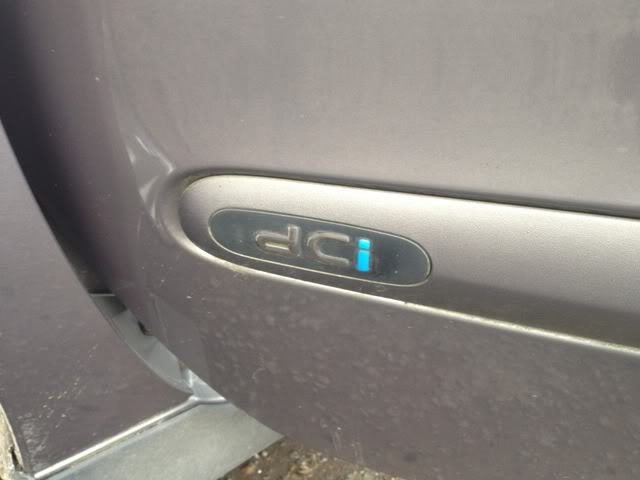 Oh dear, looks like that smoke was just cought in time before it went into bomb fire mode, shame! Though that is the older 1.9DCi is it not, or are they the same as in the LagII? Will it be scrapped or put through the auction again?

What did you think of the 1007 Luke? Looks like a Dolce spec but what engine and more to the point, gearbox?
Top

Yep it's the older one, equally as brutal if maintenance is neglected though! It will be pushed through in that condition this evening.

The 1007 was a 1.4 Dolce with 97k miles. I was quite excited about driving it, but the whole experience was ruined by the clutch which is at the end of it's life. I stopped on a slight incline in the yard and it couldn't get going again. I also found a few receipts in the service history for numerous door related parts which was a bit worrying - plus the drivers electric window isn't working. Yet to experience the 2 Tronic Sport!
Top

R9UKE wrote:Yep it's the older one, equally as brutal if maintenance is neglected though! It will be pushed through in that condition this evening.

The 1007 was a 1.4 Dolce with 97k miles. I was quite excited about driving it, but the whole experience was ruined by the clutch which is at the end of it's life. I stopped on a slight incline in the yard and it couldn't get going again. I also found a few receipts in the service history for numerous door related parts which was a bit worrying - plus the drivers electric window isn't working. Yet to experience the 2 Tronic Sport!

Im guessing the bidders will be made aware of the slightly singed engine?

I guess they wont be made aware of the slipping clutch in the 1007 though?

That is my main worry about buying a car from auction, you dont get to drive it. I always fear a worn out clutch, which was what the only recent car we bought from auction had. A FIat Stilo with a very worn clutch.

I suspect the poor little 75bhp 1.4 will be a bit strained in a 1007, its a very heavy little car. Though manual which would be nice. If ours was a manual we would have definitely kept it, as it was a very funky little car which drove quite well and had a very versatile interior. Ours was a 2 Tronic 1.6 Dolce - same engine as the Sport but not with alloy wheels or the extra sporty bits. It was lively and would scream round to very high revs when floored in very quick time. I used to thrash it as it seemed to like it, steering was very direct and the brakes very strong. Though cornering could be interesting and any damp on the roads would result in it pushing wide and then if it decided to change gear round a corner the backend would want to come out. Though I put that all down to having plastic Nexen tyres up front and Tigars on the back, almost as bad as having Linglongs or Triangles!

Ours never had any door problems and the lady owner who bought it at a few months old didn't suffer any problems at all with the car. I do still like the 1007s and smile every time I see one, but that 2 Tronic gearbox drove me insane, I guess some people would get used to it though. Saying that, it was ideal for a 20-30 minute crawl into a City centre.

I remember being parked in Tescos one day, as I was walking up to it a couple were getting into a VW Polo in the next space. I pressed the both door open button on the key (there was two of us), as the doors slid back they both turned and stared at it and started asking me about it when I got to the car. They liked it, asked if it was a new models and what it was like to drive. I had a few instances like that and it always got looks.

You can always sell it if you end up with one

They are truely excellent bits of design ... so long as you don't intend to move it under its own steam

Renault, designed over the phone

Bad luck on the Megane, Luke... Almost certainly the insurers will try and write it off - that is easy £2-3k repair I would think, a proper reapir will involve stripping half the car and fitting a new quarter panel - and then offer you a derisory trade in value for it. However - you are not claiming off your insurance, so you have the right to be put back in the position you were in - that either means they repair it, or offer full market value in recompense. Fight your corner - hard! You should be able to get it sorted out.
Top

Thanks Richard, I won't be parting with the Meg easily! I'm dropping in to the body shop just after 12pm and we'll see what they have to say.

Chris - Nope, it's up to buyers to ask the driver of the car questions about the clutch etc . The 1007 was bid up £1000 last night which is a bit of a bargain, even factoring in the price of a clutch (Is clutch replacement a standard job on these?). I'm not sure if it sold at that or not, I'll find out when I'm up picking up the dream I bought myself this afternoon. Watching the faces of the crowd while the door rolled open was quite a sight

But yes, they're definitely on my list, I'll have a 1007 in the collection at some point, purely for the oddball factor.
Top