R9UKE wrote:. They are very smooth riding cars... on smooth surfaces. They are upset very easily by choppy surfaces, and minor pot holes can send a big crash through the cabin.

That reminds me of when customers would ring up (my dad used to have a citroen specialist business) and say their car has a very nice ride on the smooth roads, but any bump and its awful. Kind of would be!

A Vauxhall Signum just looks a bit bland, and like a Vectra from the front with a Vectra dash ... lets just hope it doesnt have the Vectras lack of suspension too. Never have I been in a harder riding car which was underdamped at the same time, hideous.

R9UKE wrote: What engine is in this S80? If it is petrol I'm sure he got it for buttons. Early 2.9s can be had for little over the £500 mark. Very appealing indeed, I love the look of them - so modern yet so dated and classic Volvo!

Yep! Same engine as the Renault Safrane, I've seen them with 250k+. Supposed to be very good.

I havent driven a Signum yet, but I've driven countless Vectras in work and they're not too bad. Much preferred over Passats and Primeras!
Top

Yep, today I saw one that I would have time for and would happily have driven home in: 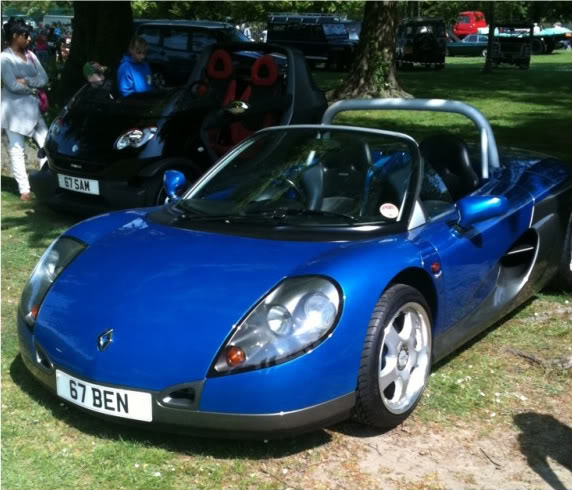 A bit daft really, totally extovert and impractical but on a superb hot sunny
day it reminded me of an Aerial Atom or Lotus 340R. I used to see a yellow
one every week whatever the weather and regularly parked up without any
weather protection in driving rain.

Guess the reason I like it must be because of it's door mirrors?

So many cars, mainly low number cars verging on kit cars, use those S2 style CX door mirrors, they are pretty neat looking.

SO Luke, this Volvo 2.4, is it a Volvo unit pinched by Renault? Please dont say the other way around!

Ive not driven a Passat, though have countless times thought about buying one, the road tests put me off. "don't go for the 130 TDi, the chassis can't handle it" What! Is it made of chocolate or something, a large car which struggles to put down 130bhp, best avoided, if that is true.

And I can think of another reason to avoid Primeras (the big last shape) as the diesels are 2.2 DCi Renault engines.

If your going to drive a Renault engine, you might as well have it bolted to a Renault car.
Top

What a car! I have never actually seen one, but have a vague memory of one in a Renault dealership when I was about 7 years old. They sell for massive money, I've seen one listed at £19,995! They look like their body is plastic? I'm ashamed I don't know... does anyone else?

Oh and speaking of dCis, I spotted a Laguna at the side of the road today amidst a cloud of smoke and the fire brigade putting out an engine fire. No surprise to see it was a 2.2 dCi

I'm really in the mood for a V6 at the minute. I was behind a Nissan QX and a Kia Magentis today, both with V6 badges, and found them strangely appealing. That's not good

R9UKE wrote:I'm really in the mood for a V6 at the minute. I was behind a Nissan QX and a Kia Magentis today, both with V6 badges, and found them strangely appealing. That's not good

Made me cry trundling along on an open derestricted road at 30 behind a
Skoda Superb with a 2.8 (IIRC) V6 badge - my god but progress was painful
and despite being in my Xant v6 there was a widely gapped out thread of
opposing traffic that prevented my safely getting past. Why had they got
the car to drive barely in top gear on an open enjoyable flowing country
road then?

The only explanation I can think of was the driver was a silvertop and was
likely scared to ramp too many hard miles on the car he's bought with his
retirement lump sum which he plans to keep and see him out?
Top

I've felt that pain and frustration many a time! It just makes you wonder why the hell they've shelled out extra for that beautiful noise and effortless oomph when they tootle around at sub-cruise control speeds

To be fair though, the poor man needs all the excitement he can get when he's in a Skoda!

I remember being driven home in my friend's mum's Espace. She was so slow, frustratingly slow actually. He mentioned halfway through the journey that it was a 3.5 V6! Apparently it was only bought as she needed an automatic, and it was the only Espace auto on the market at the time. Some people

Luke, no one really ever needs or should have a Kia Megentis or a Nissan QX in their lives! I can't remember the last time i saw a QX, mind, they don't exactly stand out. Plenty of cheap V6 cars out there without throwing down your sole on such a mundane car which no doubt handles like the trolleys I always seem to get at Tescos, the one with the iffy wheel!

I have seen a one or two, or maybe more, of those Renault sport cars, they are indeed plastic. Quite a thing too and much more appealing than an Elise in my opinion.

I have found that what you said a month or so back Andrew to be true. Driving the Activa really does make everyone around you seem like such slow drivers (they usually are) but painfully painfully slow. People seem to bother to slow down for corners

I like to press on at the best of times and wish people would stop going so slowly. Though I dont often see V6 engined cars around here, maybe I dont look.

Im sure some people buy V6s because they are yet to be convinced by modern diesels (ring any bells Luke) then once they realize they are at the Shell garage every other day popping in another £100 to see them the next day they driver slower and slower ...

When my mum had a V8 she used to hoon around in it, despite the 8-10 MPG around town. Thats the way to do it, dont get a big engined car and then worry about fuel economy

Actually, seeing the interior of this Kia Magentis I think you're right Chris. I'd rather spend a weekend in bed with Vanessa Feltz than sit in there.

Your mum has the right attitude. No point in having the power and not using it. I've been horsing this Vel Satis all weekend and the MPG hasn't dropped below 34! I'd still rather have the petrol and sacrifice 15 MPG

Sorry Chris but I reckon mine will always drink from the green pump. A diesel grumble just can't beat the hum of a V6 gulping it's way through the fuel tank.
Top

R9UKE wrote:Sorry Chris but I reckon mine will always drink from the green pump. A diesel grumble just can't beat the hum of a V6 gulping it's way through the fuel tank.

Disgusting in every possible way !!

Like petrols there are one's to avoid,but you cant beat a good diesel

No, that is one seriously dull car, cheap mind, but who would want. Kind of a car you buy and it'll still be with you in your retirement, as you wont be able to give it away

I do see the point of a V6, Id have one as a second car for sure but not a daily driver. To be honest my 2.0T CT is on par with a V6, if not worse, for economy and I do very much enjoy using that. The TCT is a bit diesel like in terms of its low down pull and turbo kick (which im lead to believe is increased on mine) which is probably why I get on so well with it. Not sure if a V6 would deliver that kind of drive? Oddly enough I had a real rekindled liking for my C5 HDi the past few days.

R9UKE wrote:Sorry Chris but I reckon mine will always drink from the green pump. A diesel grumble just can't beat the hum of a V6 gulping it's way through the fuel tank.