It's not exactly the perfect place to admit it!

Sorry but the S80 is just more my kind of car

Another proclamation from Mr Volvo!!

The Xm bland! No Character! Whats wrong with you man

If you want bland and soulless buy a Volvo S80, it will do the job of being comfortable and being a Volvo, but it wont have much in the way of personality and they don't drive anywhere near as nice.

You think Xms are expensive but not Volvos? If your willing to go for an early 2.4 petrol with spaceship mileage then the S80 is cheap, if you want a well equipped diesel with a sustainable mileage they get pricey.

XMs are not expensive, even the ones priced higher are value for money.

Citroenmad wrote:if you want a well equipped diesel with a sustainable mileage they get pricey.

Sorry for admitting it, but there's a long list of cars I want to own before an XM.

One of which I drove today. What a spectacular car which really made me wonder why on earth anybody would buy a diesel. Renault Laguna V6

I know you dislike diesels Luke, though I really fail to see a real reason behind it.

In my mind a car has to be special for me to fuel a petrol car, if its a big old cruiser which is never going to be that quick or handle that well, I dont see the point. Trundling along at 70-80 +, as I do in my C5, but with 50 to the gallon rather than 25 seems a no brainer for me. Does the same job, but at half the cost. Why throw money away on things like fuel, there are much better things to do with your earnings!

There are some places I have to drive to and roads I have to use which Id rather not. For example going to work is all duel carriageways and town work for 14 miles. Id rather get there as cheaply as possible, I can't see me ever using the Activa for my 70 mile uni commute.

HOWEVER, I do disagree with myself there

Ive been pouring fuel into my Activa like it has a colander fitted to the underbelly of its fuel tank. I don't mind at all, its such a car, one which I love driving and so dont mind putting in the fuel. So I guess if you like a car enough, you might well pay for it in fuel. Had there of been a diesel Activa in the UK though ...

Its the drive of a good diesel which really makes me buy them though, the fact there is always a good amount of power there without the need to rev the bits off it. So ok, if your in a fast driving mood then its often fun reving a petrol, however during day to day use I find the low down pull gives good performance without having to thrash it all the time, so therefore a smoother drive.

I think this is why im getting on with the TCT Activa so well, as it actually has that diesel trait, a low down torque band which starts from much lower revs than most similarly sized NA petrols as its a Turbo. It also revs very nicely too.

I really need to try a V6 something or other and see if my thinking changes. I can see the reasoning if its a nice engine in a nice car. So if you like S80s enough to warranty its juiciness then go for it. Personally id buy a newer diesel version and keep my day to day costs lower.

I do actually like that Volvo, and its probably a good combination with a 2.9 engine and auto box. Id not like to run it as my daily though.

Im enjoying having my diesel and juicy petrol together, id not like th be without the diesel for daily use and if one had to go it would certainly be the Activa.

I can see why you would want other cars and not an Xm though, you are after all into Renaults and we can't all like the same cars. How boring would that be! In fact i know very very few people who do like XMs and Xantias. They're missing out

The S80 D5s are so nice to drive, I wouldn't be bothered with a Petrol one.
Top

Just a quick update, feel like I'm neglecting this!

I am now Volvo-less and having a rather Renault-filled week.

First of all, the Clio had to go. Despite being excellent in the both the engine and gearbox department, it was never going to be bought by anyone. So the poor thing was scrapped (or recycled) with 5 months MOT remaining, making me £41 in the process

I'm currently in Birmingham, driving my first Vel Satis - the 3.0 dV6 all week. What a machine! It's about to hit the 100k milestone and still munching up those miles. I've been using the built in sat nav a lot to do a bit of car viewing around the West Midlands, and am thoroughly enjoying having a huge engine ready to kick down at any minute. I've forgotten how much I love driving ridiculously oversized cars. The Vel pokes out of supermarket bay spaces and needs carefully thread around these tight roads in Birmingham - great fun

I bought another Laguna the night before I left for Birmingham. Drove it home, seems great, and I will hopefully be MOTing it. I can't even remember the mileage to be honest, but it's a 1.6 Dynamique, so nothing special!
Top

I can't believe you scrapped that Clio Luke, last time i spoke to you it was going to stay for a good while ... probably the best decision to get shot, though not great business

Another Laguna 1.6 Dynamique hey, another tidy example? How are its 'keys'?

Thats a bit of a treat, driving around your old Vel Satis for the week, very nice! I think if anything would persuade me to get one, would be its size, do they actually feel huge? Wonder how much bigger they are to a C5 ...

So your on the search for a car to do your return trip in are you? Any possibles yet? Are you looking for something a bit special?

No bargain S80 Volvos are they?

If so, pop it up this way please

Citroenmad wrote: Another Laguna 1.6 Dynamique hey, another tidy example? How are its 'keys'?

No bargain S80 Volvos are they?

If so, pop it up this way please

You know Lagunas too well not to own one, Chris!

One key card, and surprise surprise, the lock button doesn't work! That's job number one. £25 repair, and will be without the key for about a week

Here's a quick pic before I rushed off to the airport. Very tidy except for a break in the paint just in front of the back passenger side wheel which has resulted in a bit of rust. Driving beautifully, better than the last one. 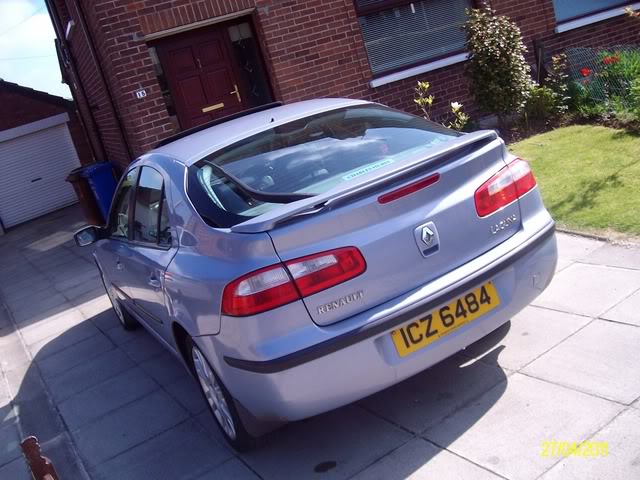 I have given up and booked a flight home for tuesday afternoon (I'm back to work that evening). I considered a few, including this Citroen C5 V6 and this equally thirsty Volvo S80. Both too expensive to warrant a drive home and the prospect of selling on!

I was hoping for a nice little 1.6 Initiale Auto. Clio to turn up while I was here. That would be a keeper and a nice change for the commute to uni.

Yes Chris, the Vel Satis feels every bit the beast. You're always aware of it's long overhangs, and you also sit higher than normal family cars. Then you hit a speed bump and it wallows over it with no grace whatsoever, reminding you what a big lump it is. Love them!

Ah well. Going home empty handed. I'll have to make up for it when I get home

LagunaIIs are tempting, nice looking, well equipped cars. No key for a week, you obviously don't have parking like I do here

It does look nice, good colour that.

Ive a real craving for an S80 at the moment, there are 7 very nice diesel examples opened up in windows on my desktop

Clio Initiale automatics are rare enough, you'll no doubt come across one sooner or later if you want one enough to keep a look out.

Bit of a difference but not quite as much as I was expecting. I think its the Vels height which makes it appear huge. Odd how it rides bumps, you would have thought it should have been a very cushioning place to be.

A guy I work with who had the mondrian 405 which I think I posted about in the for sale section has bought a Volvo S80. Now that does look oversized, I haven't seen it parked next to a classic Volvo estate but I imagine it makes them look compact

A nice upgrade, hopefully he will look after it better than the Mondrian 405!

I saw 3 classic Volvo estates parked up in a line in a bathroom sales carpark, all for sale. All were the same model, 240s maybe, and two were silver, an odd sight, you would not see a fleet of Xm estates together like that, not even Xantias.
Top

R9UKE wrote:[
Ah well. Going home empty handed. I'll have to make up for it when I get home

You should have popped over to Telford to see what Wilsons auctions had there.

pug_owner2002 wrote:
You should have popped over to Telford to see what Wilsons auctions had there.

Oh I wish I had thought of that! Great idea for next time... staff discount better apply

Chris, I go through many big want phases like that. Most recent (and ongoing) is for the Vauxhall Signum

My neighbour got a 3.2 V6 Elite about a month ago. I never took much notice at all until a week ago when I was behind her at the lights and she left me standing! Looked closer and there it is written on the back - 3.2 V6. Beautiful! You should here it... nice interior as well, and it's not unlike the Vel Satis in the rear end design. And on further investigation - CHEAP! I may well be buying my first Vauxhall soon. Oh the shame.

I thought there would have been a much bigger difference in length with the C5 and Vel. I've owned both, and the Vel just seems much more of a lump. They are very smooth riding cars... on smooth surfaces. They are upset very easily by choppy surfaces, and minor pot holes can send a big crash through the cabin. A very odd experience indeed - you'll understand completely when you drive one.

What engine is in this S80? If it is petrol I'm sure he got it for buttons. Early 2.9s can be had for little over the £500 mark. Very appealing indeed, I love the look of them - so modern yet so dated and classic Volvo!
Top
Messages: 1398