I couldn't get insurance on it, it was just a big fat cheque sitting in the driveway taking up room!!

Come to think of it, I'm wrong. The two engines aren't the same. Her Scénic would have had the same engine as the 04 Mégane, which produces 110 BHP. The Clio only got this engine as a manual. Oh dear... I forgot that the automatic is an 8v unit that produces 90 BHP. I hope it sounds the same, I love the noise of them.
Top

Id forgotten about your insurance thing, that was a shame. Would have made a nice replacement for your Meg!

Citroenmad wrote:Id forgotten about your insurance thing, that was a shame. Would have made a nice replacement for your Meg!

It's not a meaty, powerful noise! Just an odd noise that I like... I'm weird that way

Yeh, for the facelift the 8v was dropped. The pre-facelift got the 110 HP engine if a manual box was chosen, but oddly, you had to have the 8v 90 BHP engine if you wanted an auto

But.... It sold for £970 anyway so looks like I'll have to wait a while longer to experience one!

Nevertheless I still ended up buying a Clio today! Not quite the luxurious, automatic version I had in mind, but for £100 it was too hard to resist

Pics to follow, picking it up in the morning.
Top

Well here's my £100 Clio. What a car it is for that money... keeping it for one of my friends to learn to drive in when they come back from Germany in April.

Now here's the snag - the immobiliser. The remote key's receiver on the roof is broken, so the remote locking doesn't work. The immobiliser on these Clios are de-actived when the car is plipped open, but obviously, this doesn't happen. A four digit code must be input using the lock button. It must be pressed and held until the red light on it flashes slowly, and let flash for the amount of times of the number of the first digit of the code, then released, then the next three numbers. So it takes around a minute to get the car going! 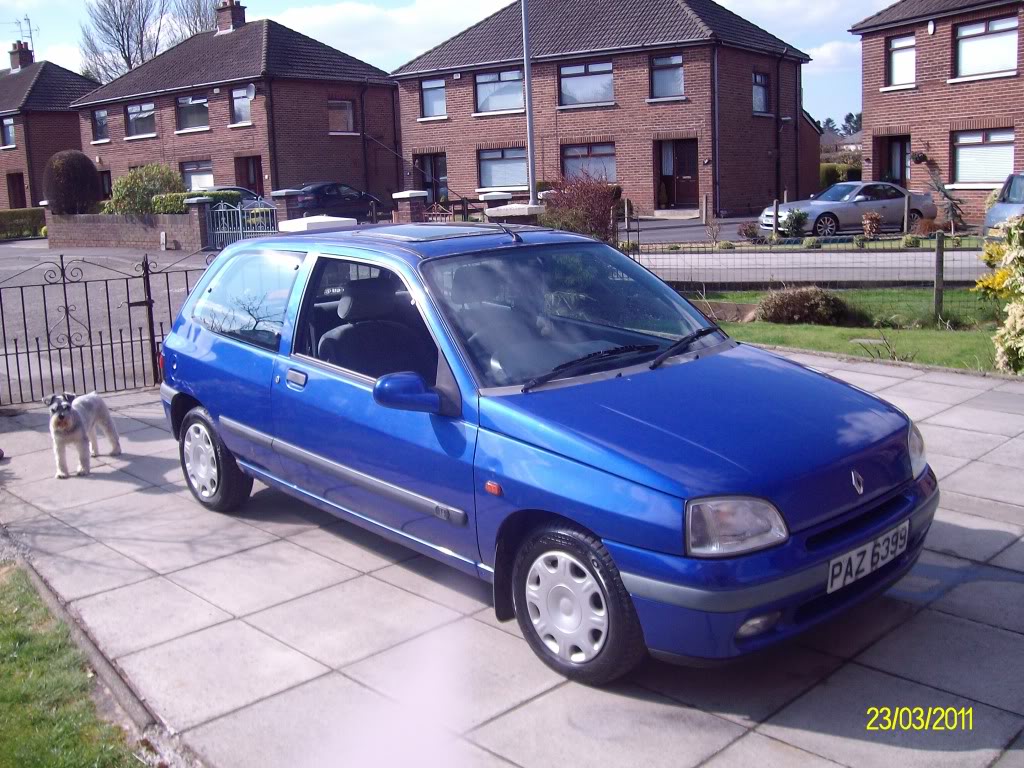 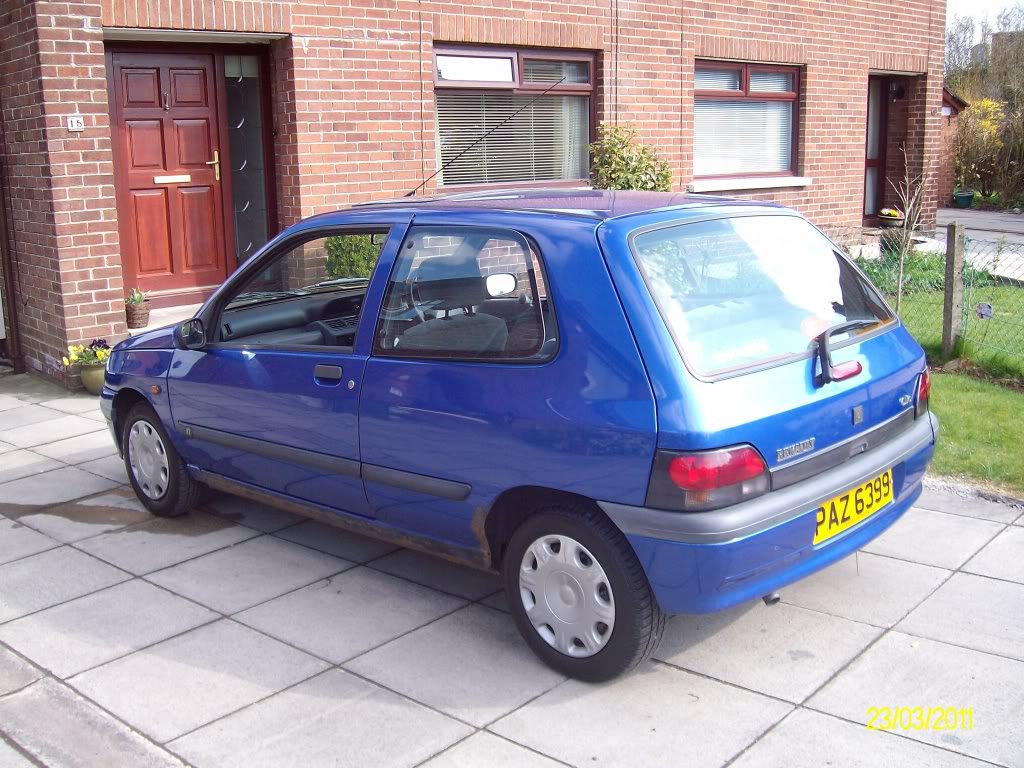 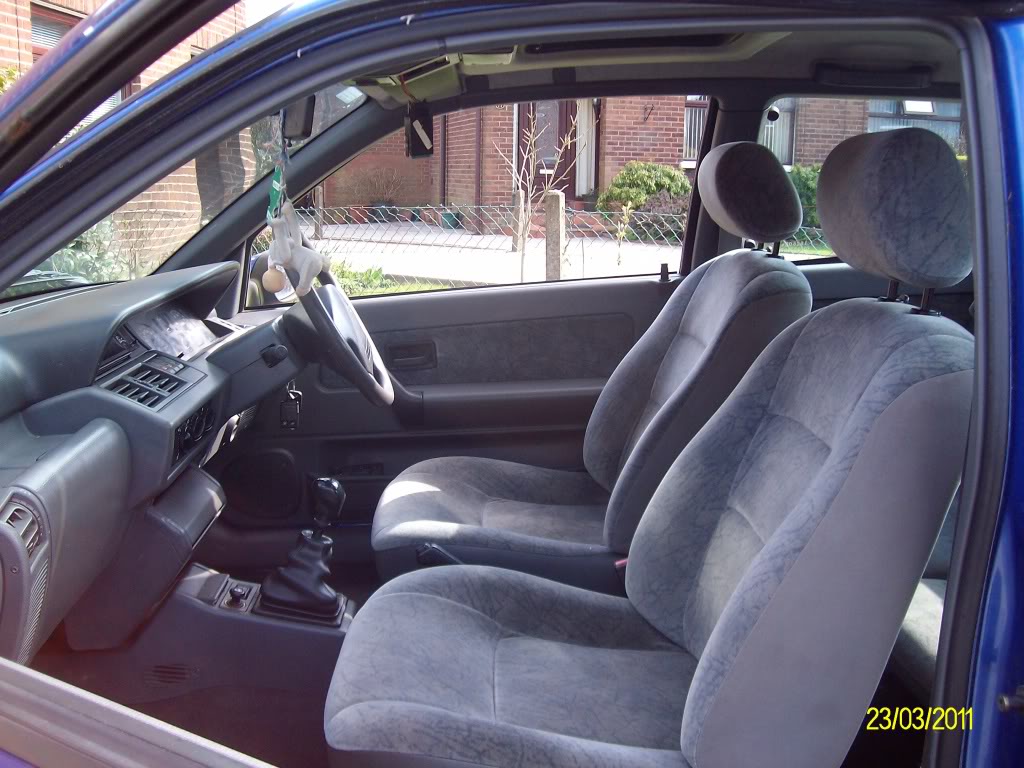 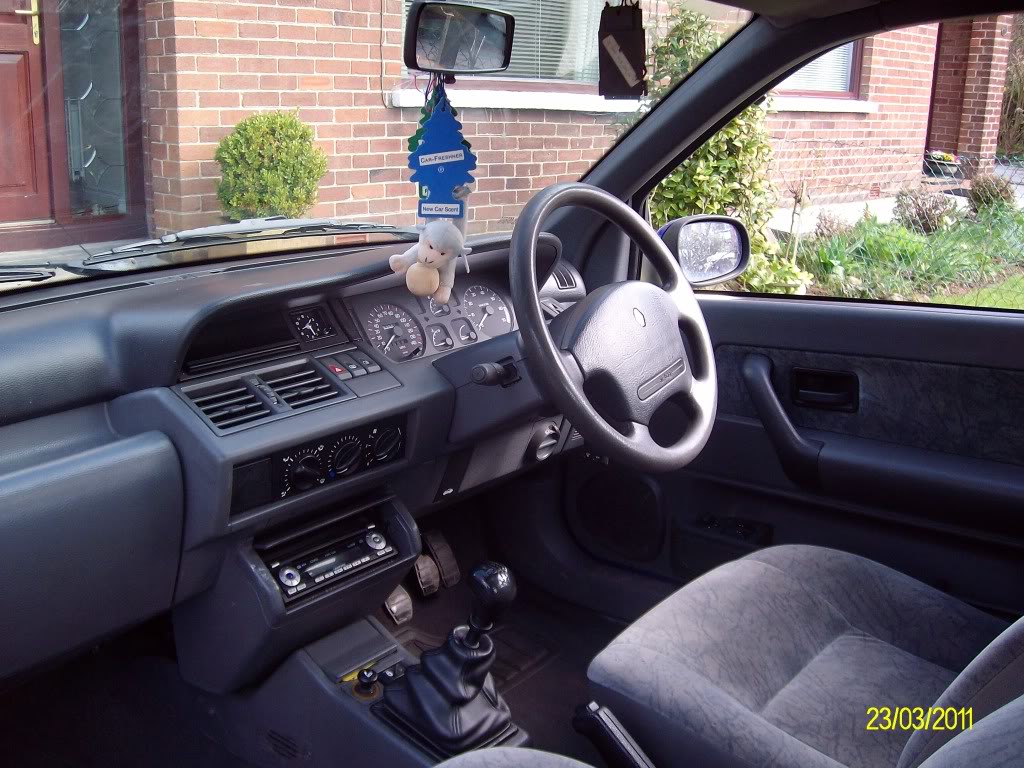 Its rotten! By that I am referring to the corrosion, not it being crap! Enjoy.
Top

Apart from its lack of sills it a really tidy car, certainly cant argue for £100 nice find

Well apart from the obvious rust and the fact at 1 minute to start the thing its never going to make a get away car ... it looks tidy!

Is there not a way to disconnect the immobiliser or replace the receiver in the roof?

£100 for a car with MOT is pretty cheap motoring.

Though I did think you were going to buy something interesting?

Yep, doubt it will get through it's next MOT with those sills. But I gave it a kick, and nothing came off!

Well, I'm hoping it's just a matter of a new receiver and re-coding the key, which is easy as it's the IR one.

I'm thinking of doing a Jeremy Clarkson destruction type thing with it then weighing it in, I won't lose any money!

The interesting car is yet to come, Chris! The Volvo has to leave first

What interesting car do you have in mind Luke?

Ive been digging through some of my old car mags and brochures this evening, while throwing out half a forrest in the process! I came across my Vel Satis brochure and the Clio brochure which includes the Initiale - looks good!

Though I also found an old 'RENOTES' mag from 2007. I flicked through and found something interesting, pictures of Renaults car collection, which is in a similar style to Citroens Conservatoire, called Flins. A big museum type affair full of Renaults from years gone by, concept cars, new cars and racing cars. Its located at a Renault manufacturing site near Paris. Its a shame that it is closed to the public in the same way as the conservatoire is, though the pictures are good in this article.

I didn't know such a place existed, I thought it might as Citroen have one as must so many other manufacturers.

One car which takes my interest is a 1998 shape Renault Clio 5 door, which has been adapted to have 6 wheels with the extension on the rear becoming a pick-up. There is also pictures of old Laguna touring cars, Avantimes and such can be seen in the background. Clio V6 'mules', all sorts of things. All covered by thin transparent covers.

What an interesting place, I'd love to go, to the Conservatoire too.

That sounds pretty cool. Had Renault TV on in the background while doing uni work the past few days... some fascinating people with some excellent cars. I'll be on there one day with my 12 Vel Satis'

The Initiale looks great in the brochure. I dug mine out a few days back to check the specs of that ebay one. I need one, an auto one, this will be my interesting car!
Top

This is a good website for pictures inside the Flins place.

Wow, that looks better than the Conservatoire. Much, much ,much more cars, and loads more modern (Luke, I mean 70's 80's 90's, not that tat you are obsessed with

Haha, and always will be. Come on, it could be worse, I could want a Nissan Juke.

Thinking of going to see this Renault Clio RXE Auto. tomorrow. Seeing as I got outbid spectacularly on the Initiale on eBay.
Top

Just wait until Renault Nissan bring out some Renault version of the Juke.


That Clio is Vel Satis money! I saw one today (a Vel turbo blower).... at a garage.
Top

True, true, but the market it slightly short of the Vel Shat-itself at the moment. I hope you got the registration number! Norman spotted Glenn Hillary's one today, over in Ballygowan
Top
Messages: 1398