Correct! How did you discover this?

Thankfully mine had a custom made twin exiting system put on it before I bought it. The original Renault exhaust barely lasted it out of the warranty period

Talking to my local tyre place Luke who after fitting new tyres on the XM commented on the exhaust blow. I offered that if he could find a centre section at a good price he could fix it

Then we got talking about unobtainable exhausts...
Top

Thank goodness the Vel has a full stainless from new, on the top spec model anyway. Still looks like 2yrs old. Custom stainless is a godsend for rare exhausts.
Top

Absolutely, Lexi. I've noticed a lot of these differences between the Vel Satis and Avantime. It's very apparent that the Avantime was based on the previous generation and a few corners were cut where they weren't on the Vel
Top

The snow here presented an irresistible opportunity to see how completely hopeless the autos are in the snow. The Vel Satis is awful, which I already knew from last year, but I really wasn't anticipated this animal to be so good! 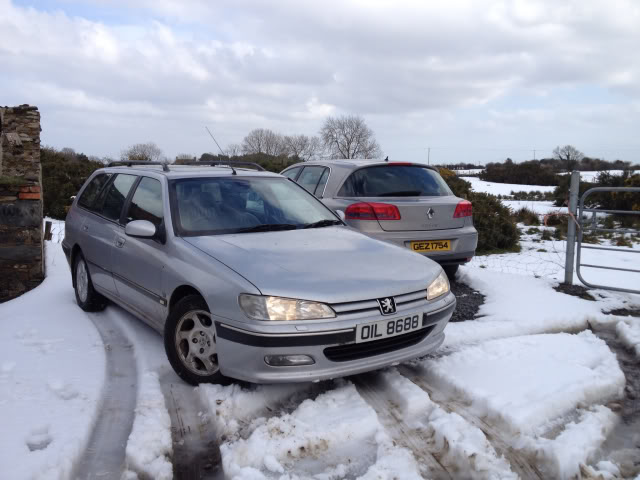 Snow mode REALLY works!! You can feel the car really trying to gain traction and it hauled itself out of the snow covered lane with no problem at all. As the French would say - incroyable!! Very impressed indeed. What a car! 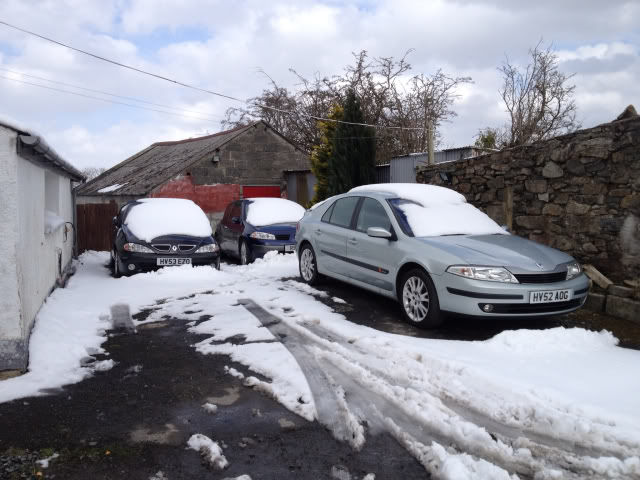 The little diesel Clio however, is definitely the car of choice. Big heavy diesel lump over skinny front tyres seems to be a winning combo! My uncles Freelander II couldn't get out of his drive - The Clio is yet to be stopped from ploughing through everything 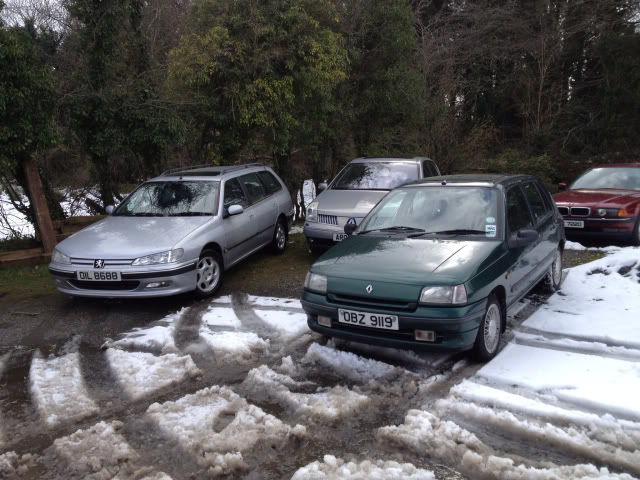 The C5 patiently waiting for David. 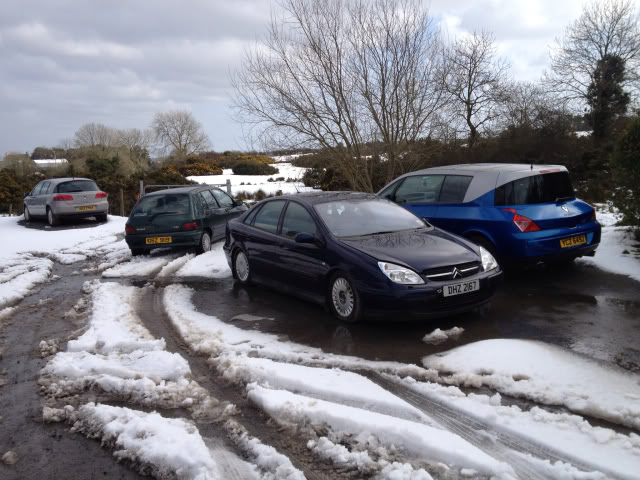 Speaking of which... A Xantia V6 will be arriving as the C5 leaves

Proud new owner of L10 SLY - and I CANNOT wait to get behind the wheel! 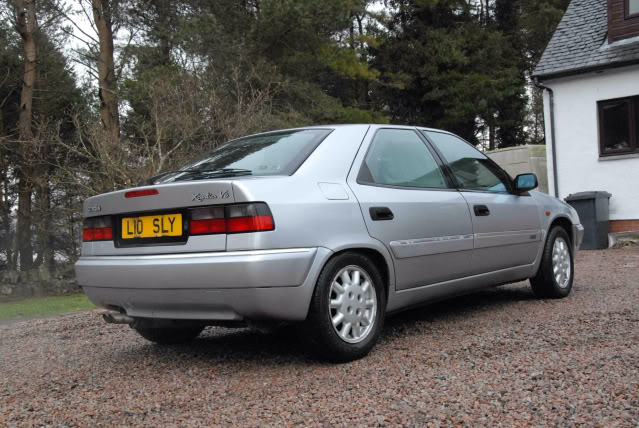 Hopefully I'll get a real taste for a Citroen V6 at the CCX Rally - the Xantia will be arriving two weeks later! Looking forward to meeting plenty of you

Lovely collection you have there!
I followed an Avantime in blue & silver on the A21 just the other day. What a fantastic looking car.
Top

R9UKE wrote: Snow mode REALLY works!! You can feel the car really trying to gain traction and it hauled itself out of the snow covered lane with no problem at all. As the French would say - incroyable!! Very impressed indeed. What a car!

Could have told you that Luke

Great to see you have a V6 Xantia now too. they're excellent in the snow too...
Top

Fake Concern wrote:Lovely collection you have there!
I followed an Avantime in blue & silver on the A21 just the other day. What a fantastic looking car.

Thanks very much! Yeh, Avantime isn't exactly a car you can miss

Jim - I was sceptical because of, erm, the Renault snow mode... It consists of a little decorative snow flake light and nothing else!!

Yes well the Xantia will definitely be a keeper, Jim! A silver Laguna, 406 and Xantia V6 trio

Robert and I are going to arrange re-gassing the spheres on it and all of his in one sweep. Hopefully it will be to many a Citroen meet in the future. See you soon!
Top

I hope you enjoy the Xantia V6 Luke, I very nearly bought that

I do like your V6 Xantia Luke , but I would sway for the 406 myself as a very nice sleeper

, how does the performance compare to the Laguna V6 ?

Mark, two very different cars indeed. With everyday driving, the 406 is eager to change up into the highest gear it can as early as possible, so it rarely goes over 2000 rpm and is still absolutely effortless and silent (well it would be if half of the exhaust wasn't missing). But press the Sport button and the red horns appear. The first time I pressed it, it was wet, I had forgotten that the car doesn't have traction control, floored it from a standstill and nearly ended up sideways off the road into the hedge. Terrifying, and much more frantic than the Laguna when the V6 mood takes hold. And all in a silver French estate car with a tow bar - it's hilarious!

The Laguna has a much more balanced character, and is more composed and well mannered when you push it - but still astonishingly fast, the speedometer moves almost as fast as the rev counter.

We'll see how the Xantia stacks up against them

R9UKE wrote: We'll see how the Xantia stacks up against them

I found mine very laid back most of the time, it encouraged me to drive quite slowly, which is an achievement!

However, when you wanted to and especially with the gearbox and suspension sport buttons nailed down, it couldn't half shift and with half reasonable body control. I found it really got into its stride at 4000rpm onwards. Great for B-road overtaking at every opportunity

Sounds epic! Really can't wait. I really wanted a phase one, and am glad it's silver just like the one I grew up with, though it was a 1.8 LX, so there'll be a few different characteristics

R9UKE wrote: We'll see how the Xantia stacks up against them

I found mine very laid back most of the time, it encouraged me to drive quite slowly, which is an achievement!

However, when you wanted to and especially with the gearbox and suspension sport buttons nailed down, it couldn't half shift and with half reasonable body control. I found it really got into its stride at 4000rpm onwards. Great for B-road overtaking at every opportunity

I'd say that was a very fair description Chris

The ES9 XM is much the same only perhaps more so....
Top

Happy Easter - only a week to go until the Rally, looking forward to it!

I'm in the midlands at the moment, got the ferry over yesterday with the Mégane which has just settled into its new home in Sutton Coldfield. The 300 mile journey went great and the car averaged 35.3 MPG at an average of 61.3 MPH. There was just one hiccup: 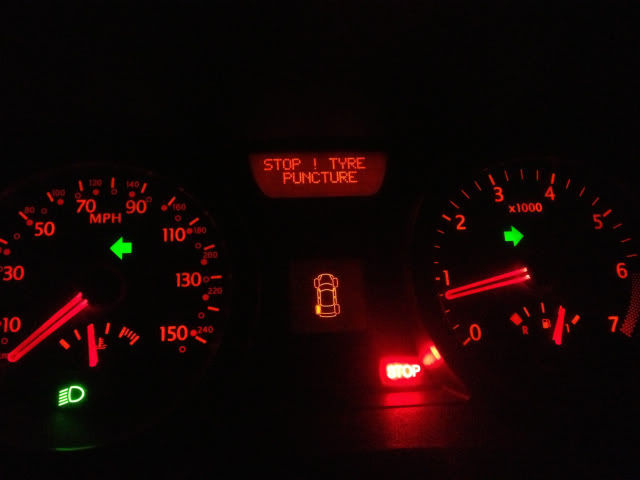 Which is about to prompt a little rant from me about attitudes towards tyre pressure sensors. A lot of people regard them as a nuisance, another thing to go wrong and another future pain in the bum for MOT. I regularly trawl the Renault forums where people are always giving off about them on Lagunas in particular and seem to have nothing positive to say about them at all. Last night I was doing about 80 MPH on the M6 when that warning appeared. The car has low profile, 17" alloy wheels which make the ride pretty harsh and choppy. The pressure had dropped from the recommended 29 psi to 21. A difference that I would never have felt and carried on oblivious at those speeds probably until the tyre was nearly completely flat and very warm - an accident waiting to happen. Thanks to this system I was able to take action before safety was compromised.

The problems come when the system is neglected. The sensor valves have a battery life of about ten years, and people just ignore a faulty sensor until 2 or more are gone and don't fancy shelling out the £30 per valve. Another cause is careless tyre fitters, breaking them or just replacing them with rubber valves without asking

So - lack of maintenance is the prime cause of bugbear, surely much like a Citroen suspension system!

I'm off to Slough to collect a Vel Satis on Tuesday which I will update about, hopefully a few of you will get to see it at the CCX rally as well - fingers crossed it behaves until then - it's a 2.2 dCi!!

Also, as the excitement of getting a Xantia V6 builds - I would like to know a little bit more about the suspension behaviour. It's a Phase 1 so will I have to wait a few moments as it rises and adjusts in the mornings like my grandmothers phase one LX? I Hope so... All part of the occasion!

Also found this video which made me LOL. Actually saw a C5 in this state the other day!