A 1997 2.0i which had fallen into the hands of some idiot at some point who had lowered it and put ridiculous rear lights and alloy wheels on.

The car itself could have been very good, but this one just wasn't. The LPG was great, driving position was nice, and for a Japanese car, the interior wasn't completely dismal. The ride was just awful though, really really bad... it sold at auction on Wednesday evening. 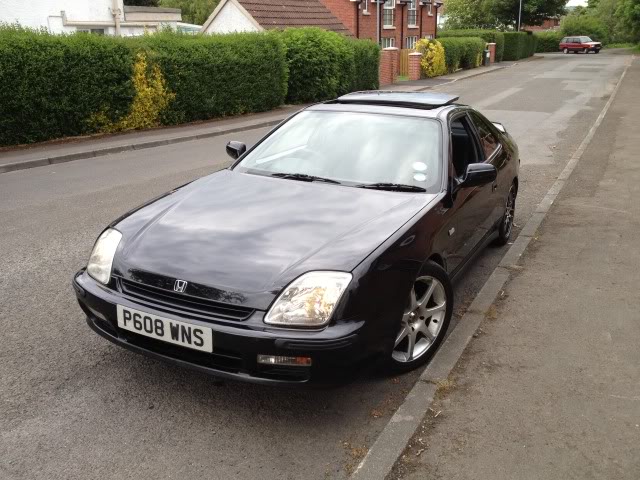 They ride very well when they have not been messed about with and are super reliable, ive got a gold one to get mot'd and they go well, the boots tiny with no room in the back and the car is huge for no reason at all, wouldnt mind a buzz in the 2.2 with 4ws though.
I sympathise with you though Luke, mostly bought by people with the iq of 1 its very hard to find one that hasnt been modified or thrashed to death, had that problem when we were looking for this gold one.
You dont keep em long do you!

Exactly! This one was certainly in with the glue sniffing crew at some point, but yes, I agree, there was a nice car underneath there somewhere.

My neighbour has a nice V reg 2.2 Auto that looks completely original and he only drives it as a treat. Mine was far from that!

It wasn't auto or a V6, so it's time was bound to be limited!

Time for an update and an introduction of, dare I say it, another permanent fleet member. 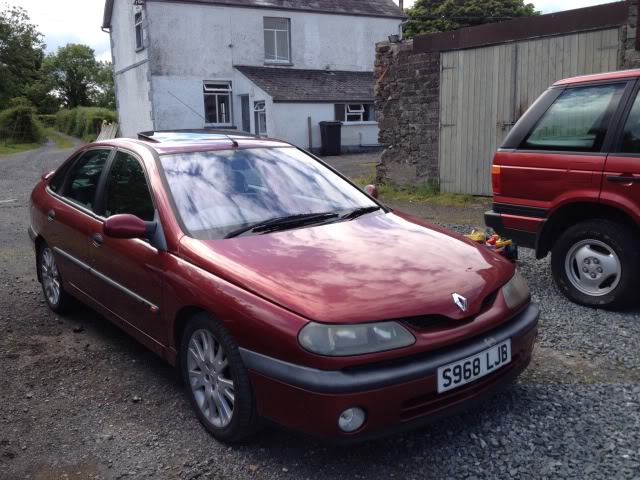 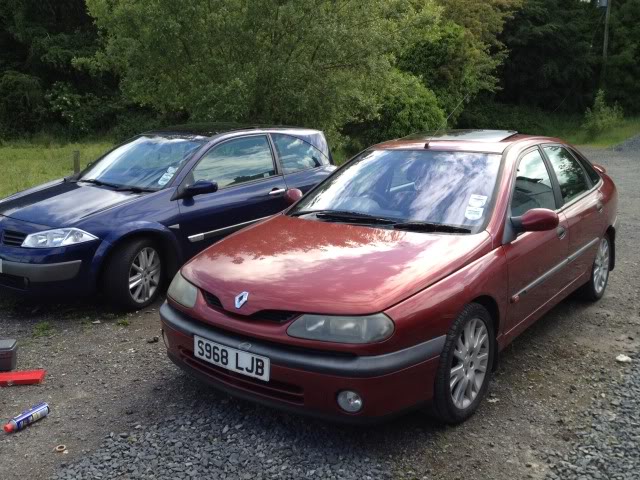 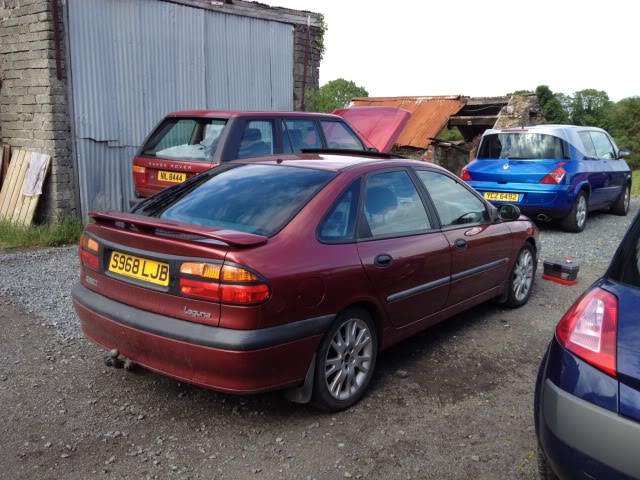 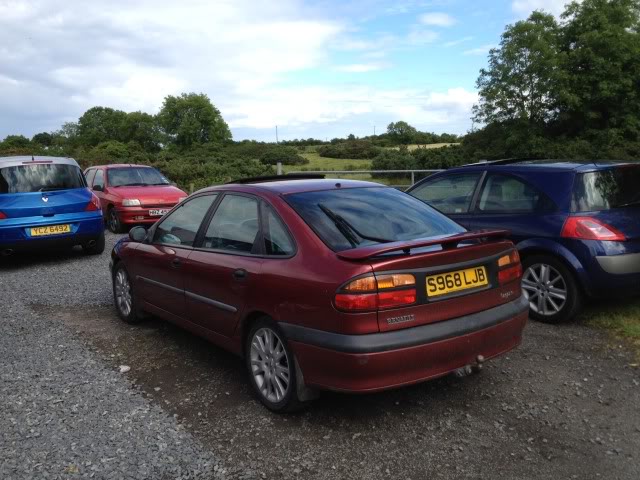 A 1998 Renault Laguna 3.0 V6 RTi manual, with the optional full leather interior. I spotted the car on Gumtree and nearly had a stroke - it's not too often a big French V6 appears on Belfast's Gumtree! Traded in to a dealership down in Newry and being sold off. 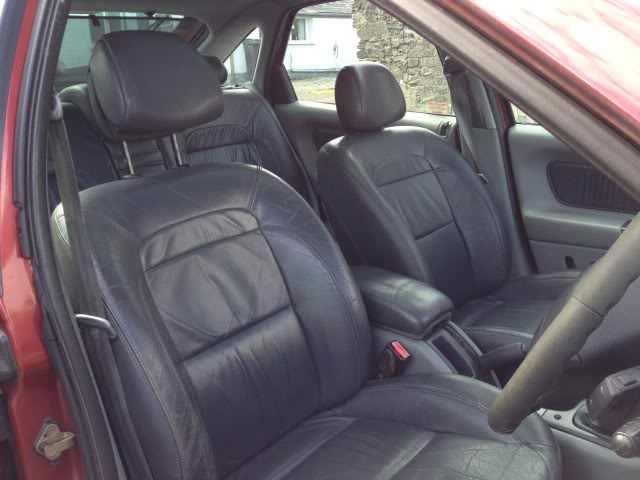 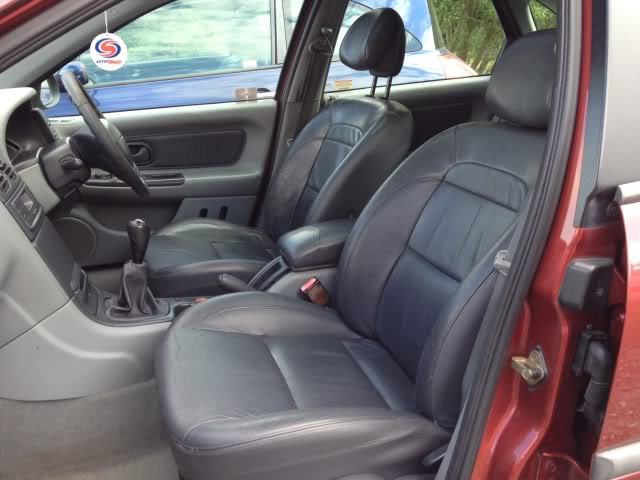 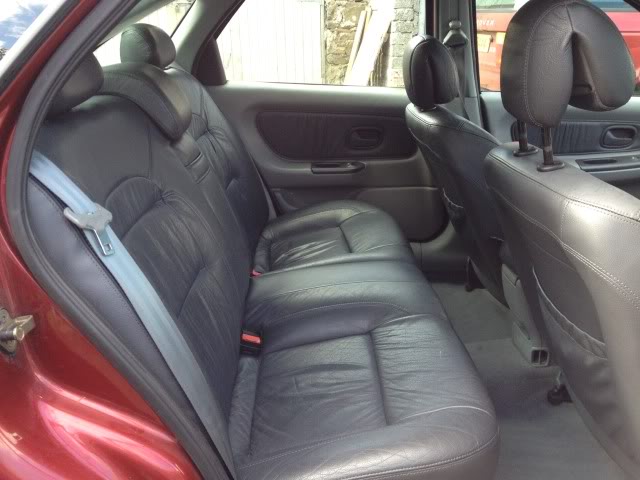 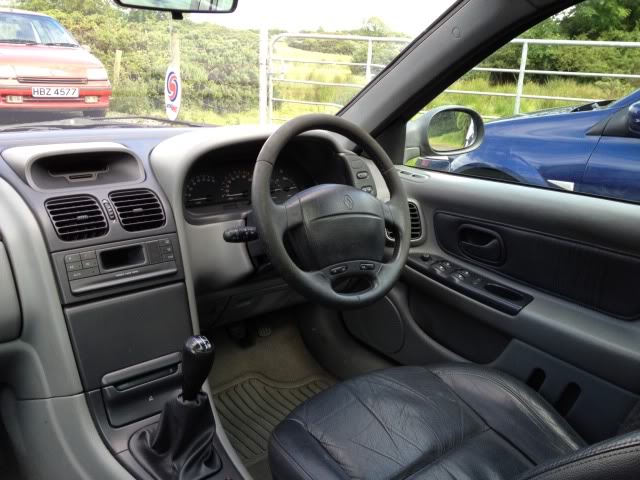 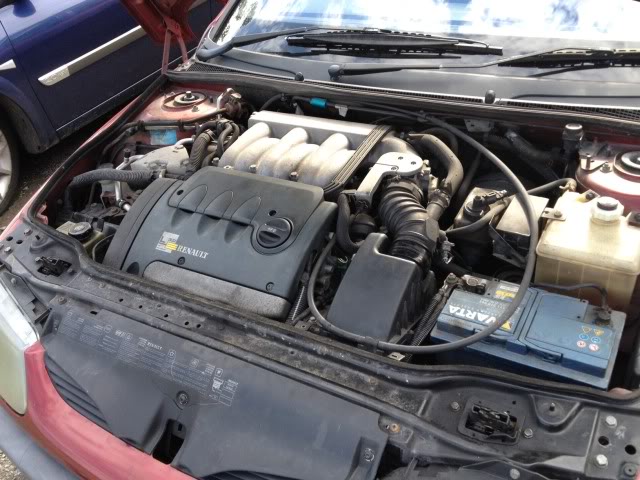 Now... is it perfect? Not by any means. It needs nursed back to full health which I fully intend to do. The first and most annoying issue was the sight of a K&N cone filter in place of the airbox. A friend of mine has kindly borrowed me the air box off his dead Laguna V6, but there'll be a new gearbox going in to it soon so I will have to give it back! Could one of you Citroen geeks please tell me, if you can from the picture, if it's the same item as the Xantia V6?

The other less annoying flaw are those Laguna II alloy wheels. Yes, they suit the car decently, but the ride and look will be so much better with the originals.

A rear wheel bearing is very audible, but that's only 35 Great British Pounds.

Now I'm not one to ever complain about fuel consumption; you can't have it all, but this thing is a thirsty b*stard. I'd say the thing is in need of a damn good service, but at the rate it drinks the stuff, there could be a leak.

It's beautifully comfortable, rides lovely, most gadgets work, it's VERY fast, very noisy and is already enjoying life at The Renault Playground.


Moving on, the blue 3 door Meg is home after four months away. My God I missed the car like I would my arms. Getting in to it again was just brilliant, the car completes me! Time to get a quarter panel and get her back to new again!!!

It also looks like the Range Rover has moved on.... to an FCF member. I'm sure they'll reveal themselves when the time comes. It's poor starting and rough running could well be due to the amount of air in the fuel lines. It's runs on the wrong fuel, so my time for it was limited.

The Laguna II V6 is returning an excellent 30 MPG with a bias towards town driving, very happy with that indeed.

The Avantime almost got a coolant change until I got half way through removing the front bumper and got beaten by the awkward French. Nothing new there

It also looks like the Range Rover has moved on.... to an FCF member. I'm sure they'll reveal themselves when the time comes. It's poor starting and rough running could well be due to the amount of air in the fuel lines. It's runs on the wrong fuel, so my time for it was limited.

that would be me then!
Top

Shouldn't be thirsty though. I'd have thought being a manual it would be a bit more frugal than the auto... Maybe you're just enjoying it too much

Diagnostics may reveal something. Check the ECU temperature sensor just in case it's keeping the mixture rich believing the engine to be very cold...

Out of interest, what gearbox has it got? a Renault one or a PSA ML5?
Top

Quick on the case there, Robin!

Cheers Jim. Yep, I was thinking the same. My friend's car, the same engine with an auto box, never dips below 28. Definitely something up, will take up your advice on the diagnostics! I have to admit, the 40 miles of country roads home passed pretty quickly

Thanks for the confirmation on the air box.... knew it couldn't work out that well!

Wow, that is nice, a V6 Manual

Looks failry tidy and its suiting those LagunaII wheels very well. I can see why you would want to keep that one

I REALLY like that Laguna Luke , a manual box too , pm me a price when you sell it please

I will surely Mark, it'd complement the ZX nicely.
Top

It's only me Luke the admin from http://www.mk2lagunaoc.com lol. You have quite a few cars there you're welcome to post them on my forum

I'm a sucker for leather and wood...

May I suggest a Chesterfield, paired with Regency side table? Your road tax will be almost nil, and comfort is indisputably lounge-like.

Nice plan - I'd love a Chesterfield.

Will I be completely shamed if one of these were to appear in my signature? Major want. 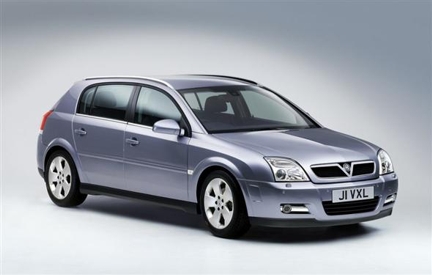 Facelift Signums look better but the costs of them are quite a bit as when I was buying my old black Laguna 2.0 Turbo Dynamique Techno back in April 2010 I looked at the Signum then looked at the Laguna also had test drive and thought the Laguna looks a lot better car. When I got home obviously as you do look at what specs and costs you have between each other and the Laguna was cheaper on everything (except tax I know) like insurance, running costs you name it was cheaper and better equipped. I had to save quite a bit of money for 2 months lucky enough he still had it so I had another test drive and really liked it so I px my old mk3 silver Astra for this car in the end. Then last year it was written off which I was really gutted about but I'm happy with my new Laguna 2.0 dCi.
Top

How about that luke?? Bit pricey to me mind...
Top

Luke, you have been neglecting us here!

Where are your pictures of your 607 and C5 and any other French fancies you car keeping to yourself?

I forgot they put the 2.0T in the LagunaII, I bet that is quite a good combination ... if it is reliable?
Top

Haha thanks Chris, I have neglected this! Time went on and there ended up being too much to update!! I promise a full, pic heavy update within the next few days

How's life with a petrol V6, Chris? There's nothing better than starting it up on a freezing cold morning.... it's winter soon, you bought one at the right time!

The 2.0T is unfortunately not immune to the infamous turbo failure, though not in the spectacular fashion of the dCis. And the Espace and Vel Satis 2.0T are more prone to it... more strain on the engine I suppose. Apart from that, it's an excellent engine. You gotta be really careful buying a 2.0 Laguna, as there's three different ones! The 2.0 16v, the 2.0T and the 2.0 IDE which you don't buy under any circumstances!!!!
Top
Messages: 1398