Citroenmad wrote: Your insurance is similar to mine

So at least that's something to be positive about

Finally got a pic of the old mans C5, the driveway is so small i could bearly fit the car in for this pic 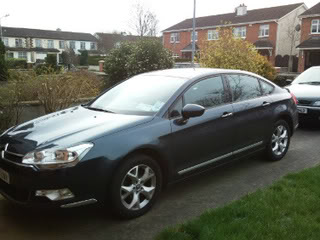 It's alright as a car i suppose,definitely not for me without the hydroneumatic suspension though, the engine sounds gutless

,he said it was nippy enough though ...

I got my exhaust sorted out for now ,the catalytic convertor had something broken inside that was rattling around the whole time

the fella that fixed it didn't have the greatest grasp of the English language so it was fairly difficult to understand what the problem exactly was,either way it's not as bad as it was

On the way there i saw a DS5..weird lookin thing sort of a mix of C4 and C4 picasso imo

Check that out.
Top

I can't imagine the 1.6HDi is a good combination with the weight of a C5III, The C5II with the 1.6HDi engine has the same performance as the C5III with a 2.0HDI 138 engine! I do really like them though, not anything like the original C5, not as spacious inside, a saloon body, most coil sprung etc. However, I can see a 2.0HDi 138 or 160 Exclusive (none of this twisted metal suspension business) C5III being my C5IIs replacement, in a couple of years.

I went and had a look at a DS5 today, its smaller than I thought it would be as it looks very large in pictures. Its a great looking car in my opinion. The driving position is very nice, snug and low but I like the way the dash wraps around. It feels very upmarket, mind it should, they are not cheap. Still, its really only a stretched C4 and so has no hydropneumatic suspension, in fact reviews says its suspension is very firm

Cats are a little pricey aren't they!

Do you have both of your Xantias on the road?
Top

Cheers for the link Robert

Citroenmad wrote:
Do you have both of your Xantias on the road?

Not for a few more years i would imagine

It's depressing just leaving it parked up i don't want it to look like one of those cars that people park up and it becomes an eyesore and then never ever sees life again,i'm going to keep it washed so it looks somewhat respectable

When the time comes i may be able to tax both and then insure them both on one policy,as it stands i can't even drive other cars because you "have" to be over 25

That is a point actually, your road tax is extortionate to say the least!

So long as you keep your other one running and in good condition it should cope with the layup, so long as its not parked on damp grass/mud.
Top

Citroenmad wrote:That is a point actually, your road tax is extortionate to say the least!

Which they are putting up again

Anything to get older cars off the road

At some point i'll have to own an Xm ....of the diesel variant of course

But on to my car,she has just had new discs and pads all round,new front and rear height correctors,waterpump,timing, auxiliary belt changes and has finally had hydraflush running through her system for the next few hundred miles.

i've never seen any Citroen rise as fast !The car handles a lot better in the corners and having everything done is a nice feeling knowing that i can rely on it to take me anywhere.

And thats just because i'm really picky about the suspension,i'd rather have it working correctly or as i see it whats the point in having a hydraulic Citroen if your not gonna take care of it properly

Im off to Amsterdam in 4 weeks so i'm saving most of my money for that ,theres always plenty of Xms,Xantias and Ds' on the road whenever i go over

When i get back and have a few quid to throw at the car again i've decided i want to put Cx turbo spheres on the front and Xantia non turbos on the rear to try and float about a bit more,as the car is softer than it was before it still is not "soft" enough as i would like it to be.

Other than that the car is tip top and i can't fault it, i have the Nct in August and the only thing that it will need doing is the airbag light which is still flashing which i need to sort out
Top

Its all coming together now then

New height correctors, you have been splashing out

First nice day in a while so i made good use of it.

Changed the oil ,oil filter,air filter and spent the rest of the day cleaning inside and outside of the car.When i was taking out the air filter the box was loose and rattly and i found that the bottom of the air filter housing is broken and doesn't connect properly,so the air filter isn't really doing anything 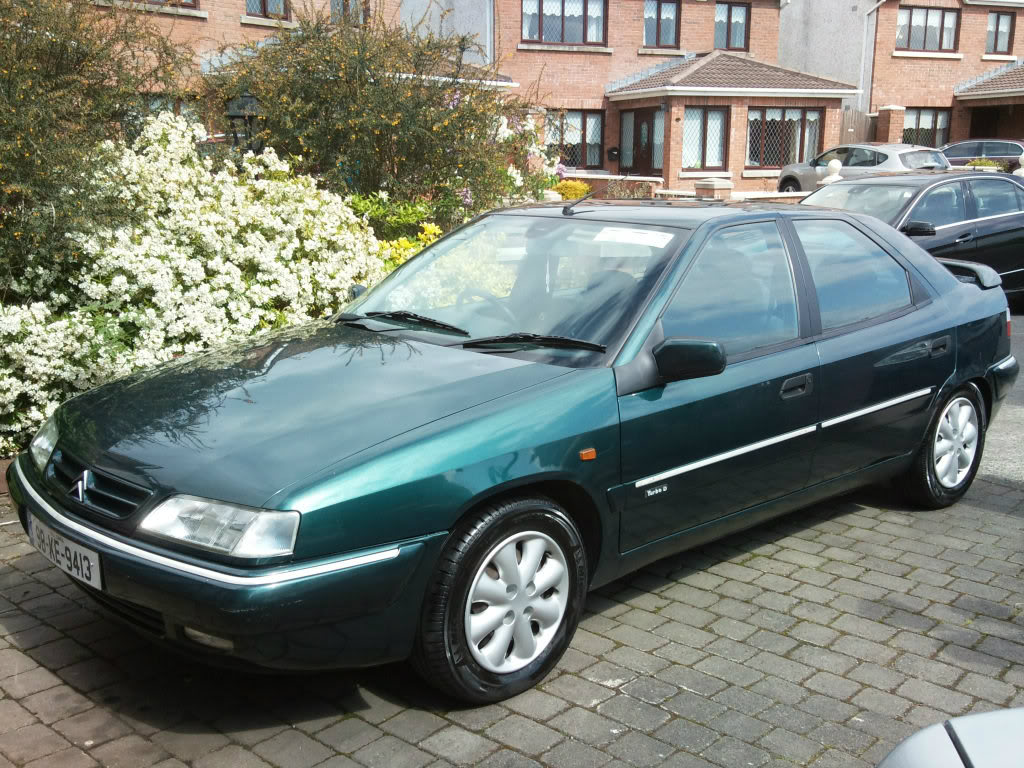 Did you ever investigate that drivers seat?
Top

I had a look at it today actually

The mind boggles as to why anyone would do it??

I'm gonna have to have a look at that airbag light aswell,i'll just take it out then when i dis-connect the battery,i don't fancy losin my head just yet

Still no luck in finding any leathers yet either,keep your eye out for me if ya come across a good set

What a depressing week car wise ,last thursday i was driving up a bridge near my old house and there was an aul one coming towards me more over the middle of the road and she wouldn't get in and took the mirror off my car

when she seen i stopped she drove off!!So i had to reverse half way back down the bridge about 30 yards or so,lucklily there was no-one behind me,i sped after her by this stage she was 3 cars ahead of me,luckily enough though i caught up to her even though she was going as fast as she could the dirty bitch ,i flashed her,beeped her and nothing she just kept driving until she reached tesco.

I was absolutely fuming at this point,i could have killed her, so i just took her reg and went straight down to the ever helpful police force

Some help they are

i basically did there job for them and the guard i was dealing with said "well i'm off duty now so i'll send a car up there" which she didn't because she's being trying to drag it out in the hope that i would leave it and forget all about it .

I have called in 7 times within the week in which time she has been off for four days in a row from when it happened to on her "lunch" and yesterday was suppose to work at 5 but apparently called in for 2 days leave...

I was told to get a quote to repair the damage which i did as quick as i could because i want to get this over and done with as quick as possible,I went to the closest breakers yard because he had the same colour door before,but this time he had 1 Xantia!!...a single xantia that wasn't even fit to grace a scrapyard it was destroyed all over and it was the wrong colour

€522 for a new mirror,to fix the dent in the door that she caused and to re-spray the whole door

Talk about taking the p**s??I would hate to see what they would do if i was in a real accident with some serious damage !!

So i'm going down tommorow because apparently she is working then ...

The very next day after the mirror got taken off i was on my way up the mountains when a very nice gentleman in a jeep on a very narrow road who was tearin along in the opposite direction flicked a lovely big stone on to my windscreen,of course it hit the edge of the windscreen causing the most damage and it now has a lovely big crack about a foot and a half long.

If i was a woman i could have screamed

Few little pics of my incident 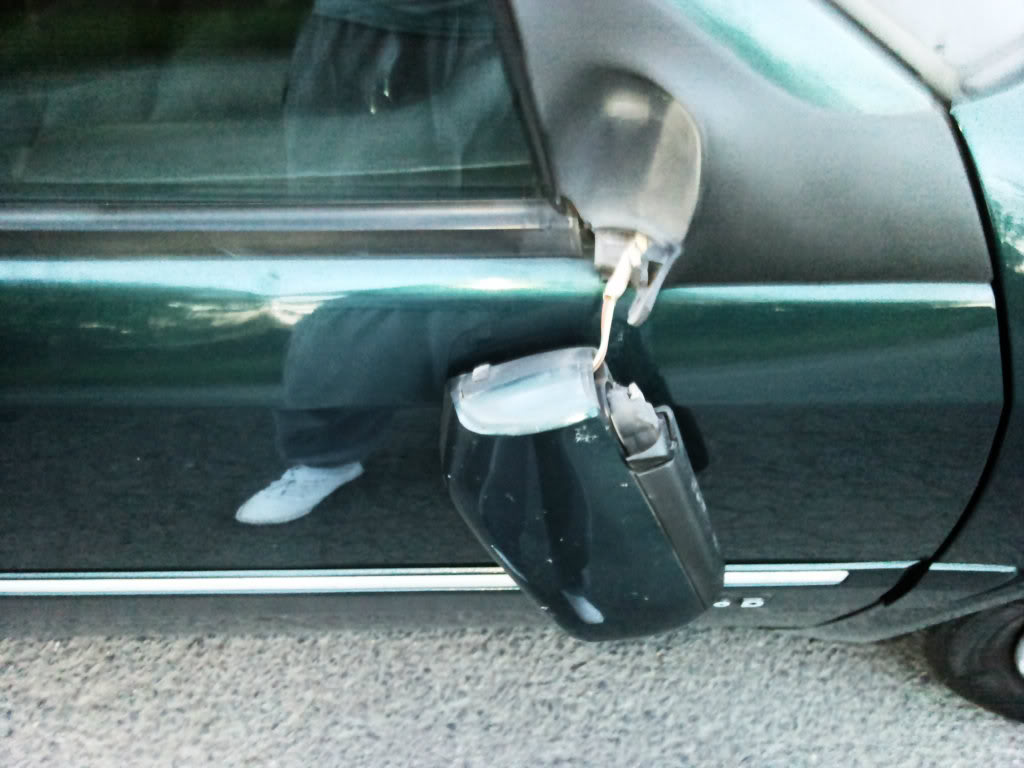 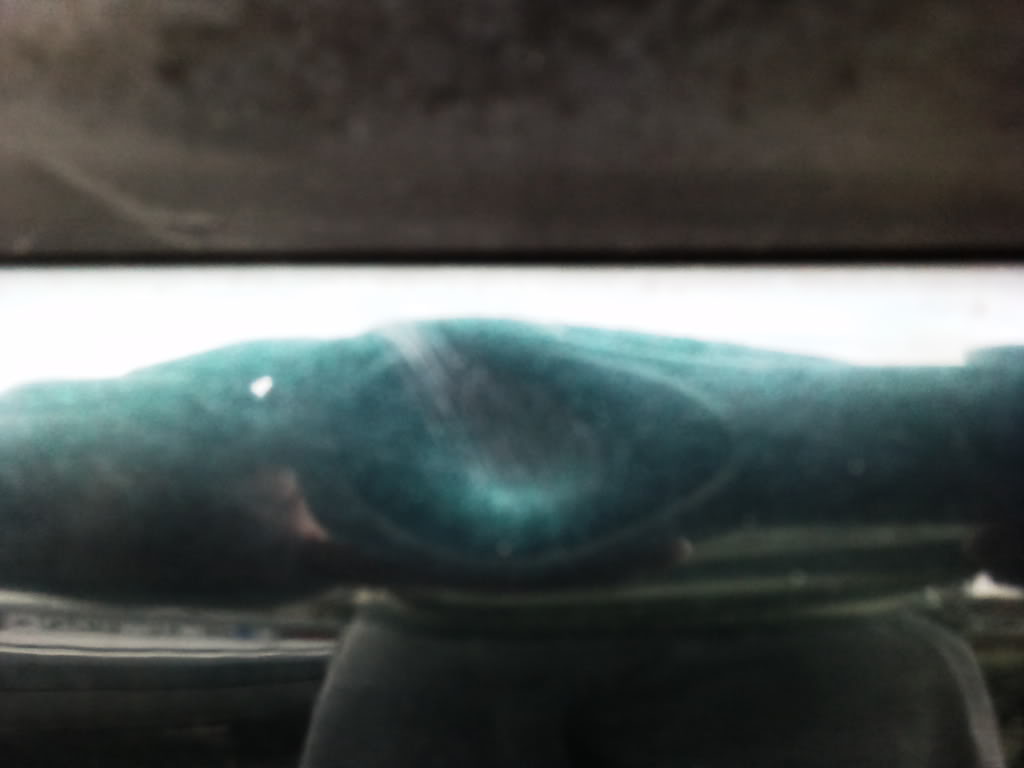 I'd forgoe the Jersey, and wind the clock back!
Top
Messages: 106