Citroenmad wrote:Yes, cheap tyres really are awful in the rain usually, shocking how little grip they actually give. I dont get on at all with cheapies, I always replace them if they are fitted to a car I buy.

Im favoring Michelins now, they seem very well suited to Citroëns. Ive had Goodyears, Firestones, Toyos and a few cheap brands on C5s now and Michelins are by far the best tyre for grip, wear and general feel, they really improve the ride in my opinion.

I have also found this with the XM too, it suits Michelins very nicely.

Your lucky in that your Xantia tyres are a cheap size, so Michelins will be a cheap investment.

I was thinking my C5 might be sliding about in this weather, as its front Michelins are about on the markers now, but no, still plenty of grip. Ill be putting on another pair of Michelins next week though.

I also have Michies on the front of my Activa, im impressed with them actually. I was trying to get something really sticky as whats the point in having a Activa if it hasnt got the grip. But the tyre size limits tyre availability and so Toyo T1-rs etc were not in its size. So I went with my favored Michelins and they are pretty decent. Ill probably get another pair for the rear before long.

I picked some Total LHM up at the weekend, £20 for 5 litres. Also got some Total Hydraflush to go in the XM too.

I'll definitely be getting michelins then Chris,I'v just had a look at the website that i'll be buying them off for the green car..I don't trust garages for parts prices from past experiences...The 2 front tyres for example he charged me €70 a tyre,the same price i could have got michelins for

I won't be doing any of the work this time

I'll be leaving the car in to the only garage that i know of that deals with "old" hydraulic Citroens ...and i trust him too,he's always done a good job before.

The only things i'll be doing are changing the front 3 spheres,oil and filter ,fuel filter, air filter and that type of rudimentary stuff

I went to the beach on Monday and when i was driving back,As i was going around the roundabout looking at the signs and not paying enough attention to my position on the road i clipped the front wheel off the kerb

A minute down the motorway and i heard a knocking in the front that sounded like the wheel bearing and i taught oh great just what i need 50 odd miles from home .I pulled in to the hard shoulder and luckily enough i was happy that it was just a flat tyre ..Here's where the fun started

I took the spare wheel down,and that was basically flat aswell

I was only 300 meters from the motorway exit and if worst came to worst i was prepared to carry the spare to a garage and pump it up there.Then i had a look for my jack...Nowhere to be seen

..All i had on me was €20 ,so with no other choice i had to ring directory enquiries and get a some cowboy sent out to me.

He was the biggest cowboy going,he was literally there for 3minutes wheel off ,wheel on ,smallest amount of air possible.Pump it up at the next garage he said to me

and you'll have the bill in the post...of which i'v yet to see

..I must mention that i had to put it on my girlfriends fathers creditcard because he was happy to just get back in to his van once i told him i only had €20 on me,of which he took too

I felt sick all the way home

and if that wasn't bad enough i had two idiots giving me the finger and making all sorts of gestures to me,it was unbelieveable and this was when i was just sitting in traffic

.I guess it takes a special kind of person to be so tough when they can lock their doors and drive off ..wankers!! I got the reg of the car do..

There's a pipe leaking fluid now and the car doesn't feel to great either.I don't know what damage i'v done but it just doesn't feel safe to drive at all 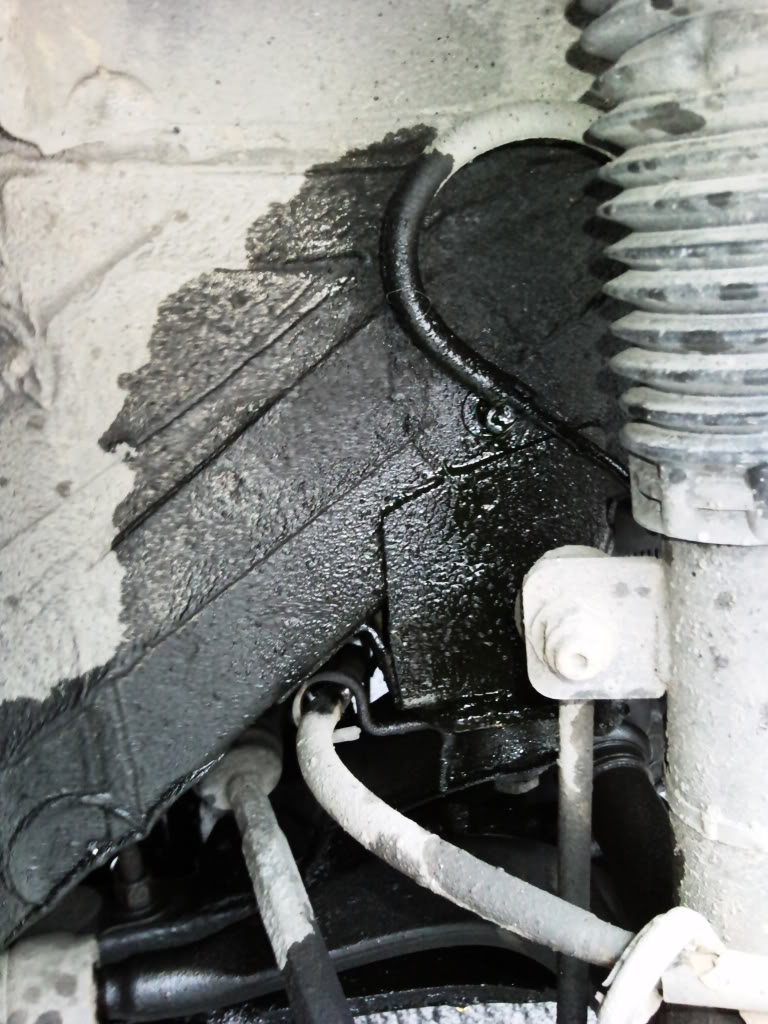 This is the tyre that was taken off,words can't describe it!!.A 6month old tyre 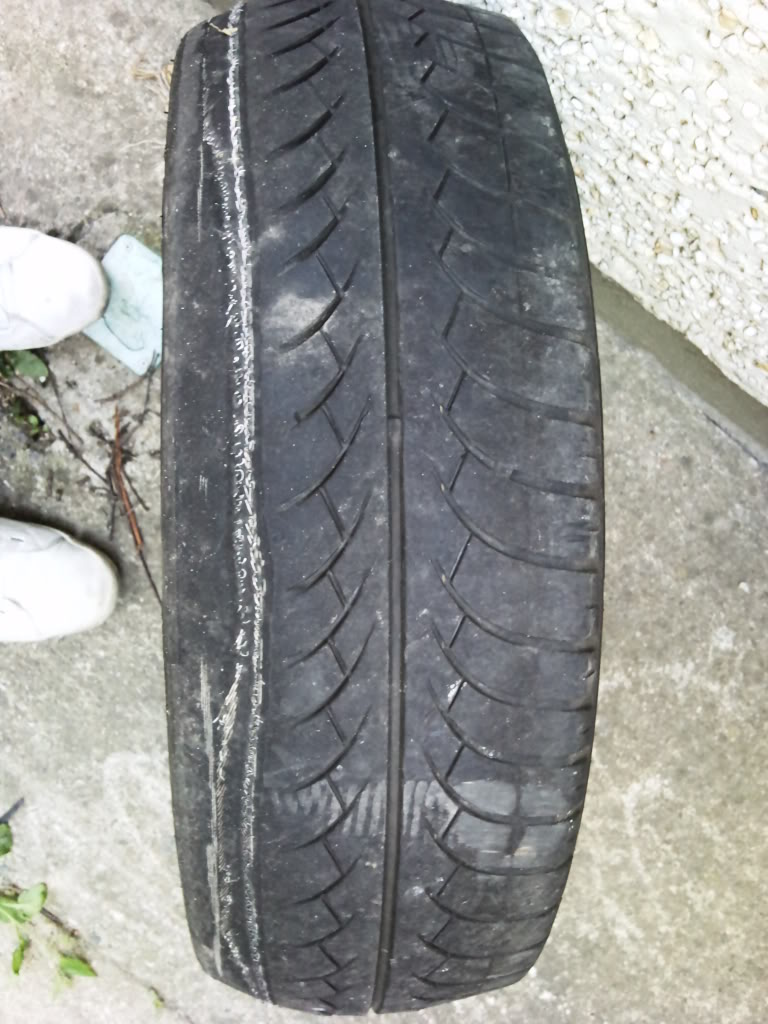 A valuable lesson learnt there Dave.

The hydraulic leak you have there is the suspension cylinder leak off return pipe. These get brittle with age and eventually spilt.

Is a low pressure pipe, so splicing in some new rubber pipe will get you back on the road again. These returns are available new from Citroen also.
Top

Wow, that is quite a tracking problem you have there! Is that the inside of the tyre which has the cords exposed? Looks like it might have been a little soft too?

That was a bit of an ordeal, its a shame people take the mick where call outs are required. It might pay for you to be a member of a recovery service for future use. Their fee is rarely more than you paid to get a tyre changed!

Though certainly a lesson learnt to keep your car well prepared

I always have the tyres at correct pressure Chris,it's kind of a weekly thing i do

I couldn't believe it yesterday when i went to Tesco to come out to ....a flat tyre

The rear passenger side this time...she's dying slowly on me

It still never amazes me at how much of a differance a few spheres can do to the car, the brakes are more spongy, the ride is improved dramatically. I don't see how anyone could be happy to drive the car around knowning that the spheres need to be changed,they were just full of Lhm

Ah, im not the only one with a weekly tyre pressure check obsession then

I had one of those leak off pipes to change on an XM a few weeks back, a simple job.


Spheres make a massive difference, they really aught to be right at all times, anything other than right just won't do! Having a Citroen riding like a Vectra is not ideal

Citroenmad wrote:Ah, im not the only one with a weekly tyre pressure check obsession then

I had one of those leak off pipes to change on an XM a few weeks back, a simple job.


Spheres make a massive difference, they really aught to be right at all times, anything other than right just won't do! Having a Citroën riding like a Vectra is not ideal

I don't see the point in having a hydraulic Citroen if your not going to take care of it tbh .... i've been driving the green Xantia today and yesterday and it's so much more responsive than my silver Xantia,I can't wait to see what it's like when i get the rear spheres and all the other little bits done to her.Im leaving it in on friday to get everything done and then hopefully brought over on the Monday to pay the vrt and sort it out Tax wise.

As for the silver car,she will go back down to my mothers house

I haven't got the money to be puting into a car that im not going to be driving.I've just got her parked outside on the drive and this evening some chap in a "motor services" van knocked on my door,presumeably wanting to fix my flat tyre...He gave me a whole 5 seconds to answer the door before he sped off

I like to keep on top of the tyre pressures as it normally makes a hell of a differance..handling wise,as well as the condition of the tyres,if your at the pumps then why not

Pressures displayed on the dash at startup! Well... they will for the first year or so of ownership, then it will change to SENSOR FAULT. And, every winter morning the car will tell you to CHECK TYRE PRESSURE for the first five minutes until the tyres warm up.

Actually... stick with the Citroen

Actually... stick with the Citroën

Fantastic advice, I'd agree there

So i booked the car in straight away to the local Citroen main dealer who charged me an hours labour to do the rear spheres..which is only €5 more than the indie i was using before charged me ..so i was happy about that and they only took 40 minutes to do it aswell

So now the car has had a new clutch,6 new spheres,new fuel gauge sensor

All that's left now is for me to correct the rear height,top up the Lhm,Vrt and tax it ,which i'm going to try and sort out this week ...after which i will have empty pockets for a very long time 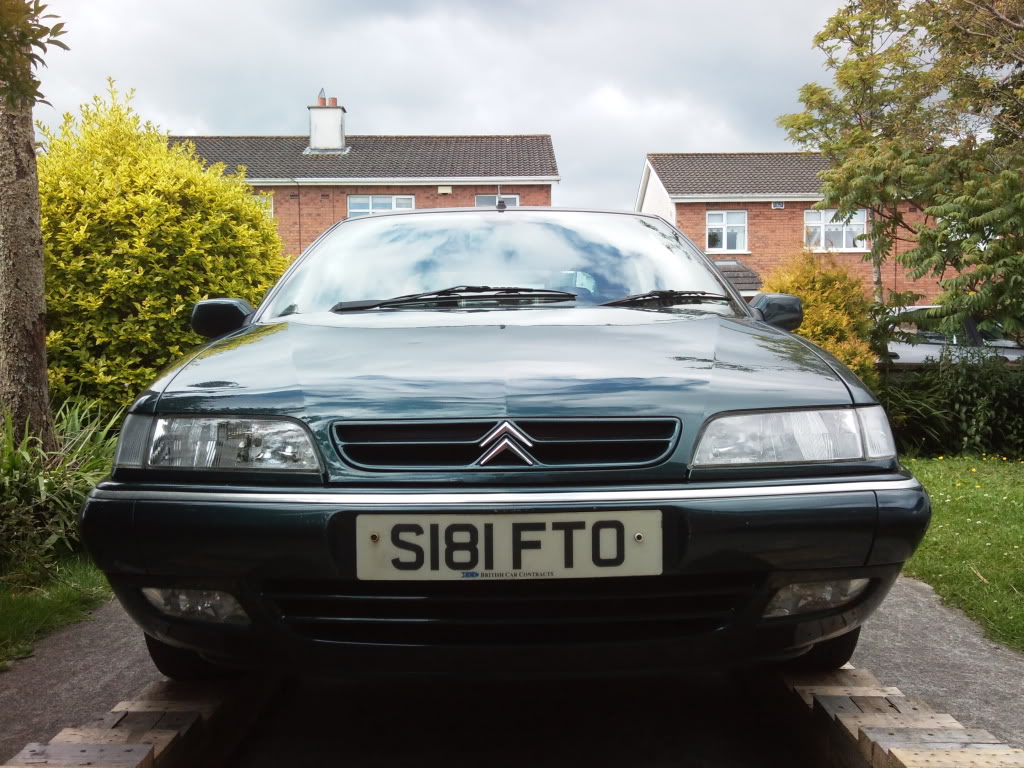 I bet the ride is so much better now too, even better again with the rear ride height set ...

What is it parked on there? Is that just your drive or some homemade ramp affair?

Citroenmad wrote:I bet the ride is so much better now too, even better again with the rear ride height set ...

What is it parked on there? Is that just your drive or some homemade ramp affair?

Easy access for getting at height correctors ,spheres etc ...

I haven't set the rear height yet ,hopefully tommorow if the weather isn't too bad

Out of the 4 Xantias i'v had, only my silver car is the softest and what i would expect a hydraulic citroen to perform like,i don't know if that is really a criticism

I hope to know more when i correct the green cars height,it seems like it is on the intermediate height at the back currently,but the front is lovely and soft....

There's always something to be done

Car is booked for the vrt lot to look it over for the 8th of august to give me some time to get some good tyres on it..

So far i think that these are what im gonna go with http://ssl.delti.com/cgi-bin/rshop.pl?d ... 15&Speed=H&

I've no Lhm left and i need a drop for the car so i ordered 15litres from the U.k for the price i could get 3litres here

And while the weather is decent i think i'm going to attempt to sort out the rear height issue today,i hope i don't have as much trouble as i did the last time,that was a right pain in the swiss roll

Good choice with the Michelins, they are what I stick to, usually.

The tyres on the front of our 52 C5 SX are getting a bit thin now (195.65.15), I think I might try some Uniroyal Rainexperts, they get excellent reviews. Failing that, its Goodyears will be swapped back to Michelins.
Top

Citroenmad wrote:Good choice with the Michelins, they are what I stick to, usually.

The tyres on the front of our 52 C5 SX are getting a bit thin now (195.65.15), I think I might try some Uniroyal Rainexperts, they get excellent reviews. Failing that, its Goodyears will be swapped back to Michelins.

I had a look at the usual brand names that you would expect to perform well Pirelli,Goodyear,Bridgestone etc ,but none had as good reviews as these had so i took a punt on them and considering they were only an extra ten quid than the cheap chinese crap that were on the front of my silver Xantia ,they can't be any worse than that