Not so much a "joke" but half funny all the same...

Old Man: You know, the iPhone 4 doesn't have Pi in its calculator.
Me: I'm sure it does. Are you in scientific mode?
Old Man: (...Searches online help and App Store for a day)
Old Man: Look, I've found it! You just have to turn it sideways. The iPod does have Pi after all.
Me: Groan...
Top

I went playing golf for the first time today with my mate Dave, who's a semi-pro.

I'd just placed my ball on the first tee and he said, "This hole is a 509 yard par five with a left to right dog leg, rough either side of the fairway and an adverse camber that undulates 150 yards from the green, which, by the way, is very fast at this time of the year."

for grandads: A four year old was staying with his grandparents for a few days. He'd been playing outside with other children, when he came into the house and asked, "grandad, what's it called when two people sleep in the same bedroom and one is on top of the other?His grandad was a little taken aback, but he decided to tell him the truth. "Well sunshine it's called sexual intercourse", and briefly explained some of the simple details.Oh, the lad said, and went back outside to play. Later he came back inside and said angrily, Grandad, Charlies mum say its called bunk beds, and wants to talk to you later.
Top

KEEP FIT:Just been to the gym. They've got a new machine in. I have only used for half an hour as I started feeling sick. It's great though. It does everything, Kit Kat, Mars bars, Snickers, Walkers crisps, etc., the lot.
Top

Apologies to the Irish but I did find these funny

''How in Gods name did that happen?" says Paddy.

His wife replies, ''Remember that night I was very dry and we had no vaseline, so I used 3 in 1 oil?''

Paddy Says, "Im thinking of Divorcing the Wife... She hasnt spoken to me in 4 Months."

Mick Replies, "You best think it over very carefully Pat, Women like that are fecking' Hard to find."
Top

Spare a thought for Michael O’Leary, Chief Executive of Ryanair.

Arriving in a hotel in Dublin , he went to the bar and asked for a pint of draught Guinness.

The barman nodded and said, "That will be one Euro please, Mr. O’Leary."

"Will you be wanting a glass with that?" enquired the barman...
Top

The British Policeman - Too Funny to be True ?

Subject: The British Police Officer.
This is doing the rounds as a joke !!! Your MP has helped make this situation all so real.

Police Officer in the UK

You're on duty by yourself walking on a deserted street late at night.
Suddenly, an armed man with a huge knife comes around the corner, locks eyes with you, screams obscenities, raises the knife and lunges at you. You are carrying a 'Glock 40' and you are an expert shot.
However, you have only a split second to react before he reaches you.

What do you do?

Firstly the officer must consider the man's Human Rights.
1) Does the man look poor or oppressed?
2) Is he newly arrived in this country and does not yet understand the law?
3) Have I ever done anything to him that would inspire him to attack?
4) Am I dressed provocatively?
5) Could I run away?
6) Could I possibly swing my gun like a club and knock the knife out of his hand?
7) Should I try and negotiate with him to discuss his wrong
doings?
8) Does the Glock have appropriate safety built into it?
9) Why am I carrying a loaded gun anyway, and what kind of message does this send to society?
10) Does he definitely want to kill me, or would he be content just to wound me?
11) If I were to grab his knees and hold on, would he still want to stab and kill me?
12) If I raise my gun and he turns and runs away, will I be blamed if he falls over, knocks his head and kills himself?
13) If I shoot and wound him, and I lose the subsequent court
case, does he have the opportunity to sue me, cost me my job, my credibility and the loss of my family home?

I am over 60 and the Armed Forces thinks I'm too old to track down terrorists. You can't be older than 42 to join the military. They've got the whole thing ass-backwards. Instead of sending 18-year olds off to fight, they ought to take us old guys. You shouldn't be able to join a military unit until you're at least 35.

For starters: Researchers say 18-year-olds think about sex every 10 seconds. Old guys only think about sex a couple of times a day, leaving us more than 28,000 additional seconds per day to concentrate on the enemy.

Young guys haven't lived long enough to be cranky, and a cranky soldier is a dangerous soldier. 'My back hurts! I can't sleep, I'm tired and hungry'. We are impatient and maybe letting us kill some asshole that desperately deserves it will make us feel better and shut us up for a while.

An 18-year-old doesn't even like to get up before 10 a.m. Old guys always get up early to pee, so what the hell. Besides, like I said, 'I'm tired and can't sleep and since I'm already up, I may as well be up killing some fanatical s.o.b.

If captured, we couldn't spill the beans because we'd forget where we put them. In fact, name, rank, and serial number would be a real brainteaser.

Boot camp would be easier for old guys. We're used to getting screamed and yelled at, and we're used to soft food. We've also developed an appreciation for guns. We've been using them for years, as an excuse to get out of the house, away from the screaming and yelling.

They could lighten up on the obstacle course however. I've been in combat and didn't see a single 20-foot wall with rope hanging over the side, nor did I ever do any pushups after completing basic training.

Actually, the running part is kind of a waste of energy, too. I've never seen anyone outrun a bullet.

An 18-year-old has the whole world ahead of him. He's still learning to shave, to start up a conversation with a pretty girl. He still hasn't figured out that a baseball cap has a brim to shade his eyes, not the back of his head.

These are all great reasons to keep our kids at home to learn a little more about life before sending them off into harm's way.

Let us old guys track down those dirty rotten coward terrorists. The last thing an enemy would want to see is a couple of million pissed off old farts with attitudes and automatic weapons who know that their best years are already behind them. 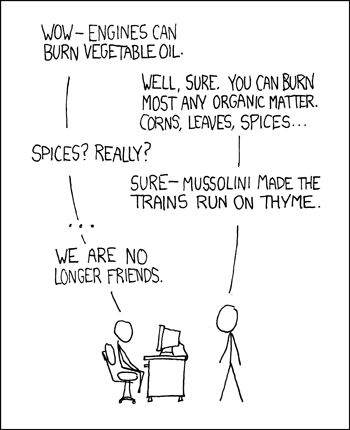 Thought some of you here would appreciate this
Top

And so did most of the office...
Top

Thought some of you here would appreciate this

Unfortunately the proxy server I work off at work has blocked it (The site you have chosen has been categorized as: Profanity - what IS it?) so I'll have to wait until I get home.
Top

Who can read this?

Interesting one yours Jim, just goes to show how there is a lot of guesswork in reading, like reference points on a CNC machine I suppose