The news of today is that my dad took the ECU apart and found one of the capacitors had spat its electrolytic guts over one of the boards within the ECU, he think's it's repairable but he's had to remove a couple of bits off the board but he says he can replace them. One of the tracks on the board has broken too in the same area, but he knows where the track starts and ends so it would be repairable with a small wire.

Fingers crossed this is the only engine related issue..
Top

My dad managed to replace all the broken components on the ECU and it fired up perfectly. It's back on the mend!

That was a very common problem with electrolytics from around that time and it caused much trouble in all sorts of electronics, including PCs.

There was an urban legend going around that only one factory in the world made electrolytic capacitors and the secret formula for the electrolyte was known by only one person. Legend has it he got the 'ump, left the company under a cloud and as a parting shot, tampered with the electrolyte recipe to cause the kind of failure you saw.

How true it is I don't know but it's a good one as urban legends go. I do know it kept me very busy when at one time a certain type of flat-screen monitor went on the blink you could guarantee that one or two electrolytics were to blame. I must have repaired hundreds and I know some are still giving sterling service to this day some 7 years after repair. They had symptoms when they were about a year old so definitely a manufacturing problem with those certain electrolytics. Maybe not such an urban legend after all.

In view of this, if he hasn't done so, I recommend your dad should replace every electrolytic in the ECU regardless...
Top

My dads worked as an electronics engineer since way before I was born, I remember going to his old work where he used to fix old VCRs and CRT TV's, before everything went awkward and throw-away cheap. I always remember him mentioning problematic capacitors where they just buldge or pop alltogether, this must have been in 95-98 I'd say from what I remember.

He hasn't replaced the other caps but he has checked them over to make sure they don't look as though they'll fail. I'll see what he says about replacing them all but I'm sure he'll have ensured there aren't more about to pop. Annoyingly the electrolyte killed a track in the board, as well as a couple of small surface mount resistors which needed replacing, one being an awkward to find resistance but he did manage to get one.

I removed the ABS/TRC (TRaction Control) ECU and he checked that over and it's internally good. There's about a million ABS and suspension error codes though

I've got some photos to post up of all the damage at some point, on a night shift currently so I'll try and post them up if I get chance, if I'm allowed access to photobucket that is.. Might even record a video clip of the engine being revved, sounds very american

The bodywork is in good nick as you can see: 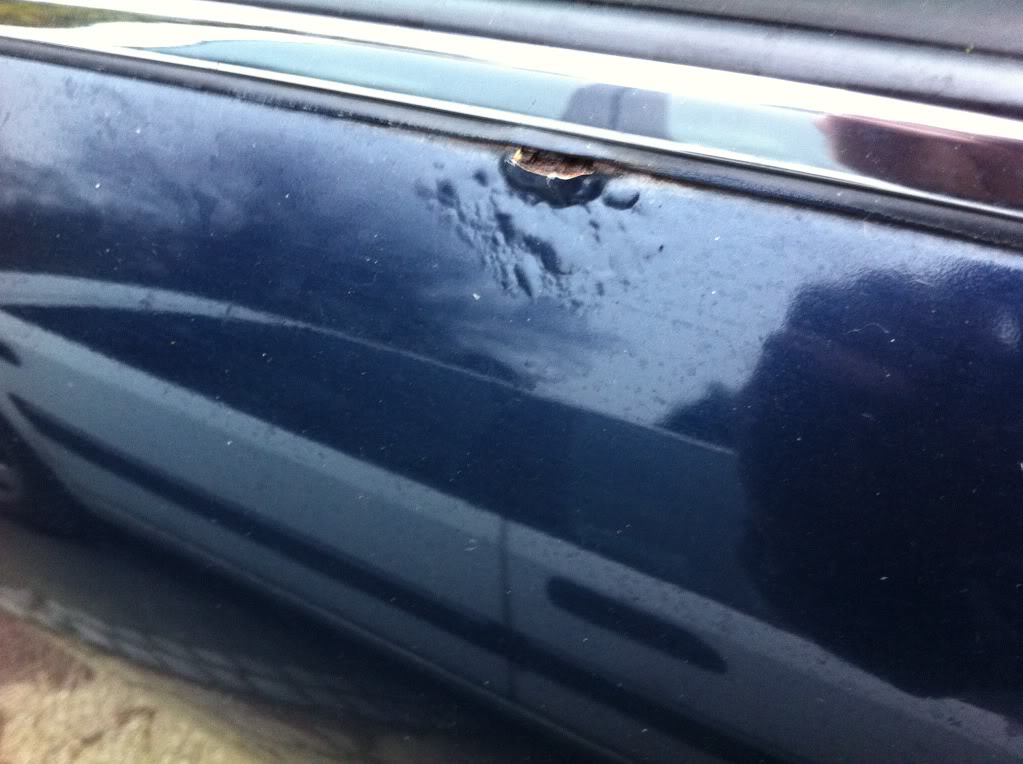 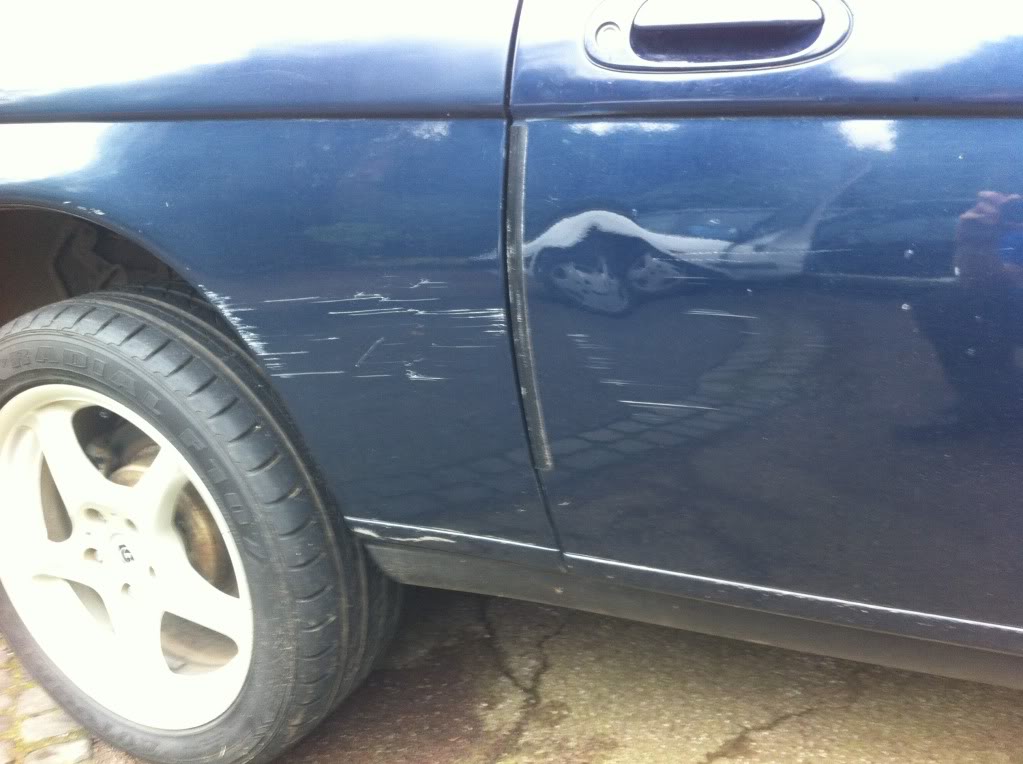 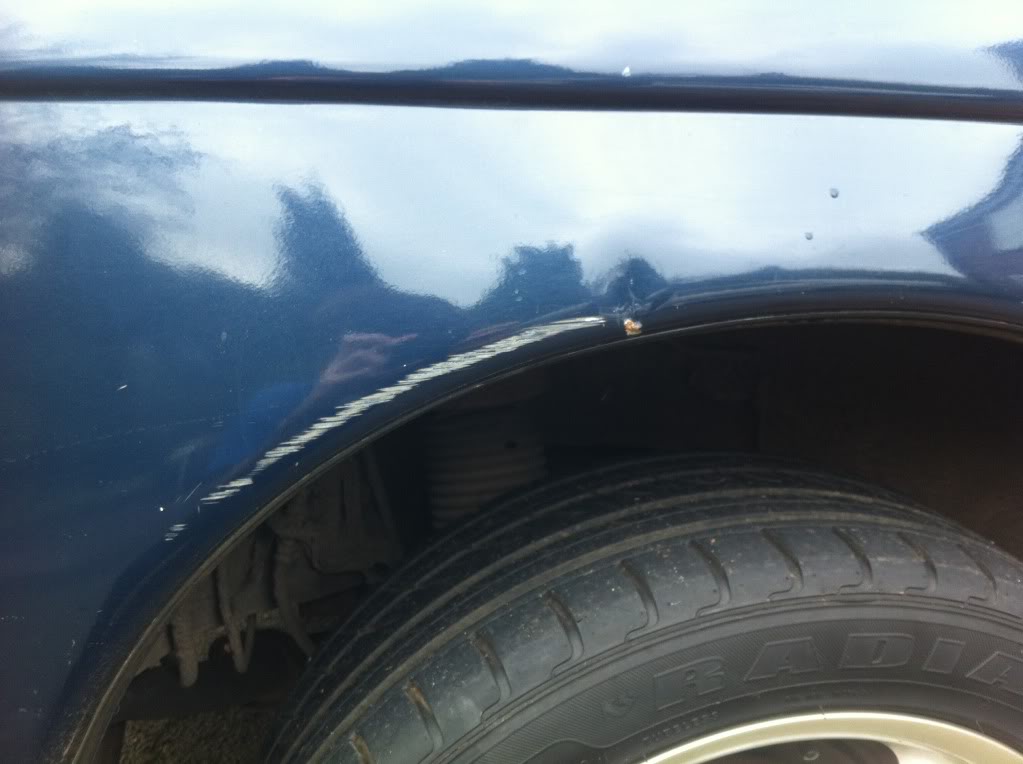 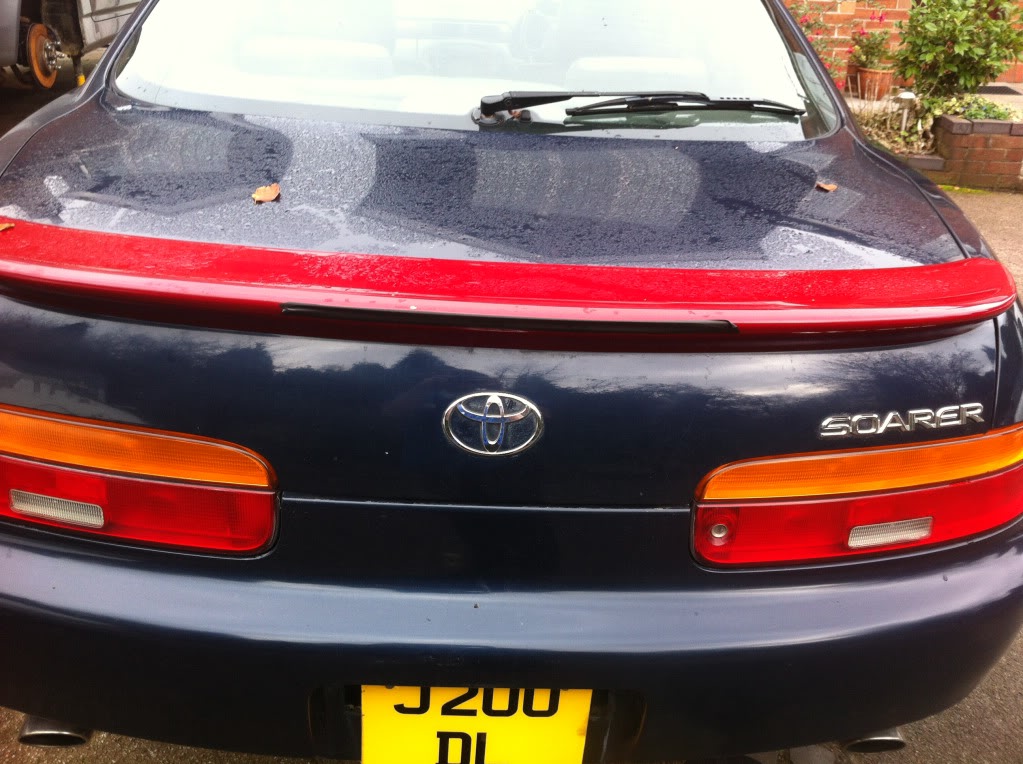 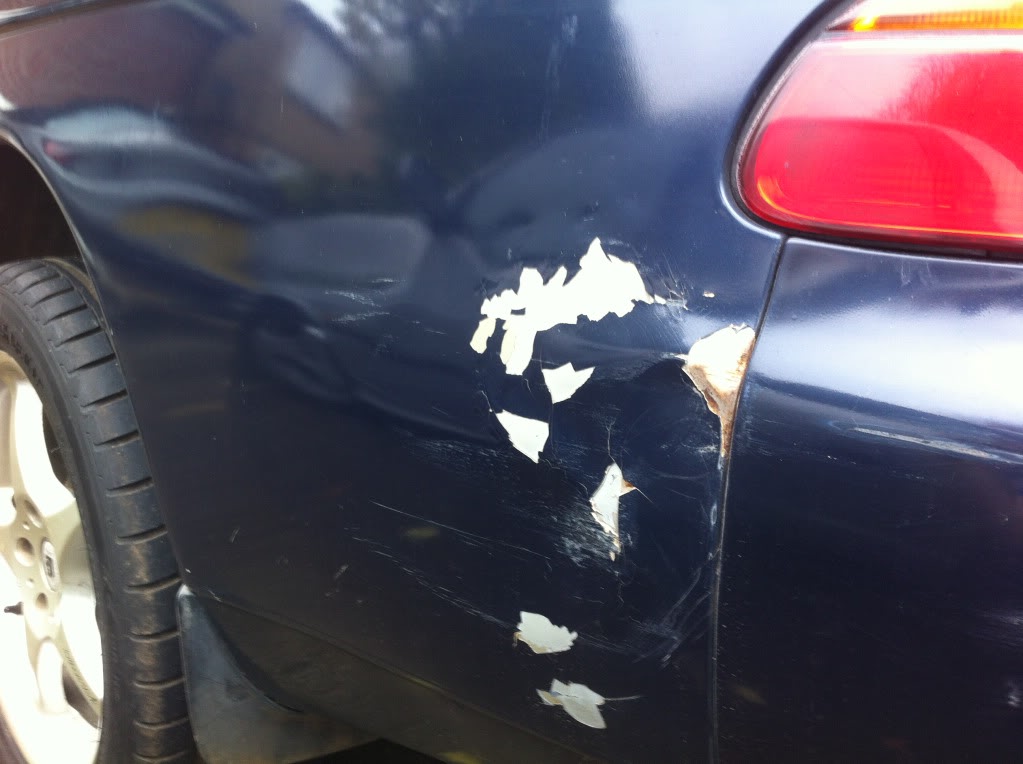 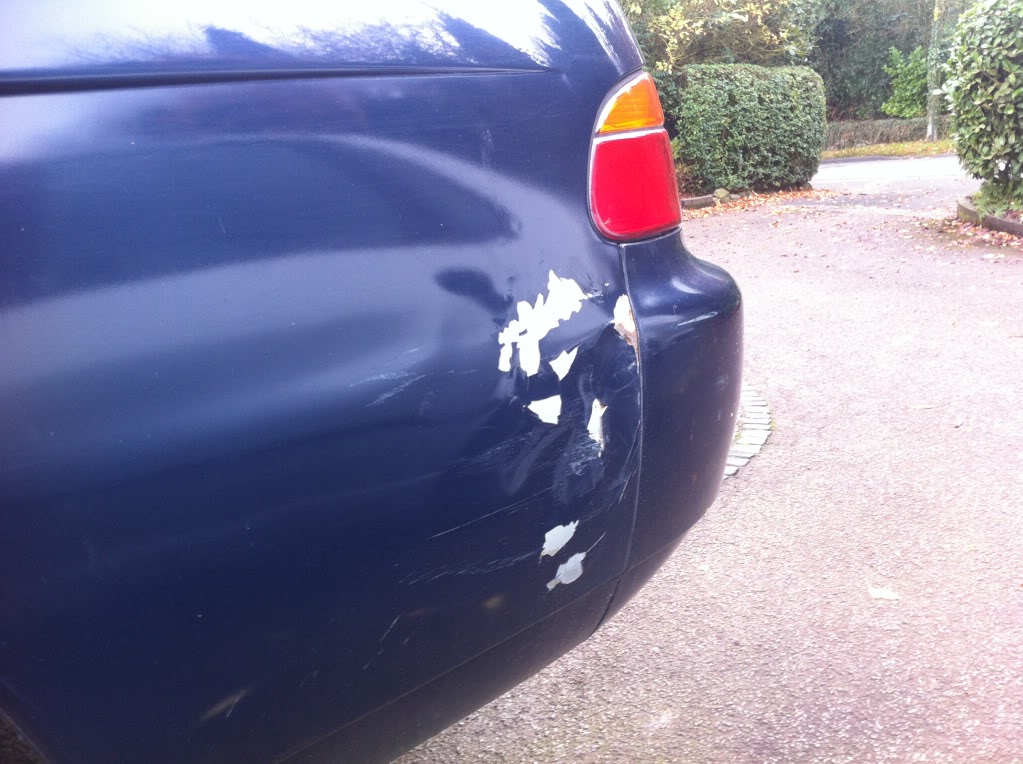 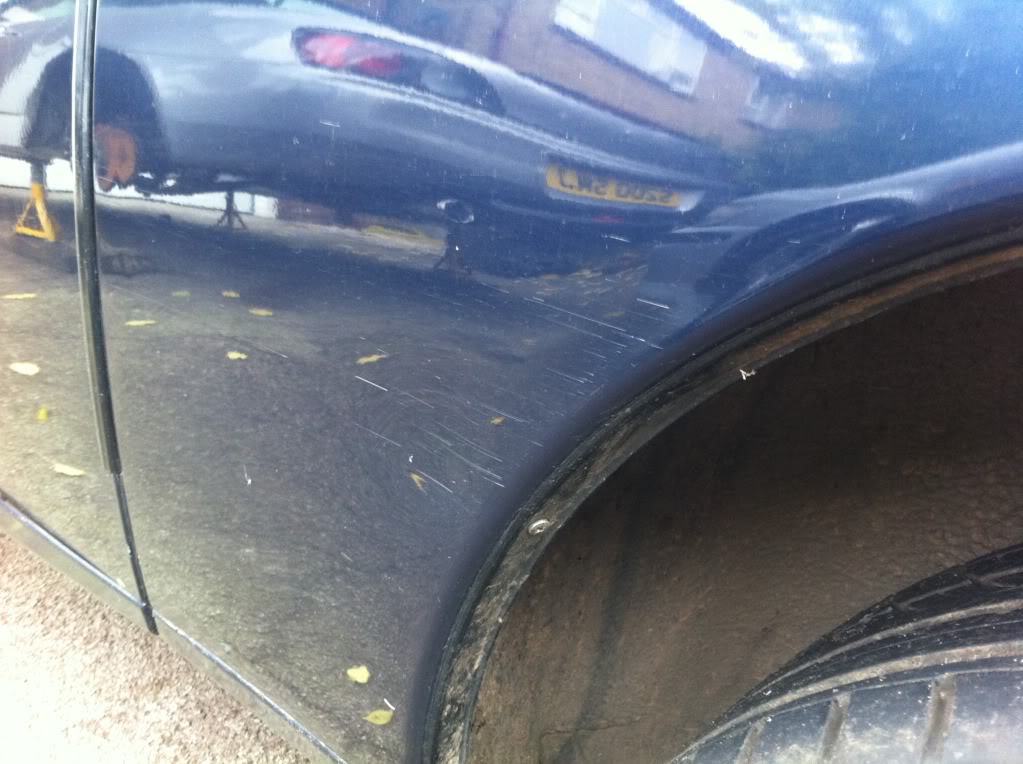 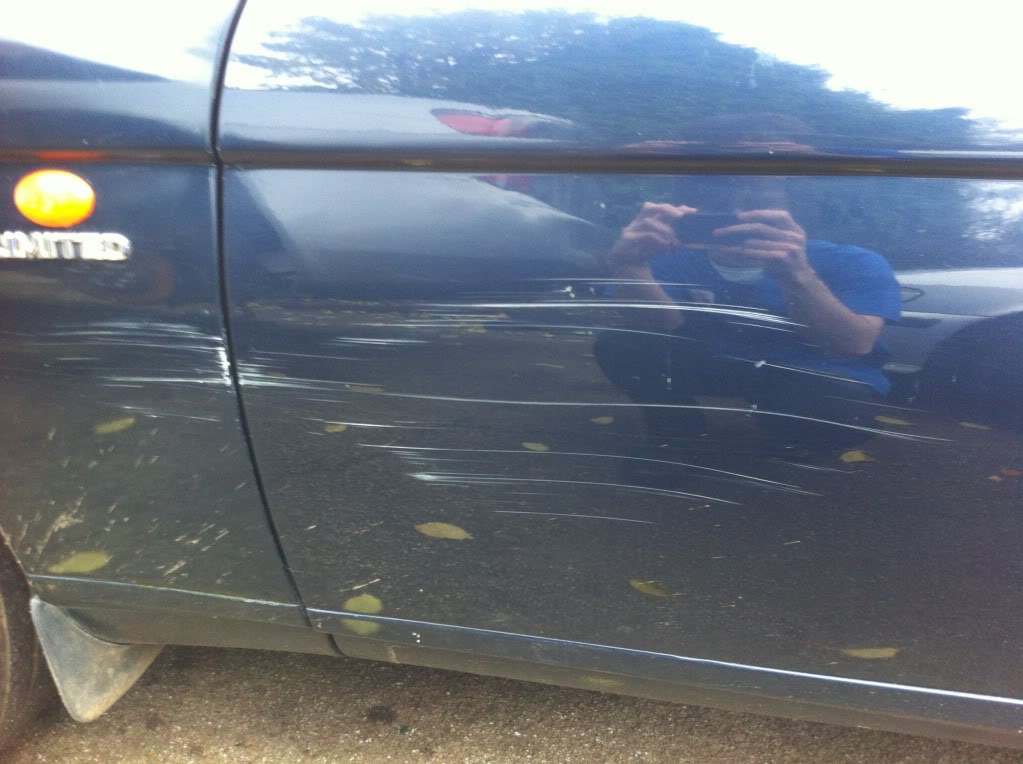 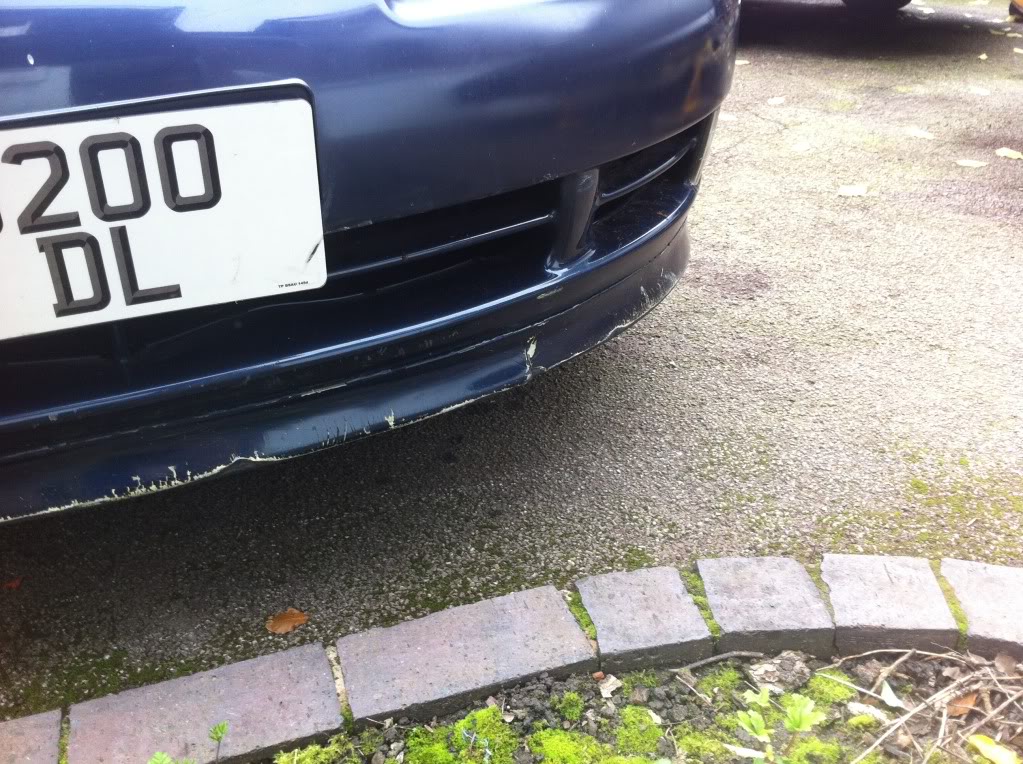 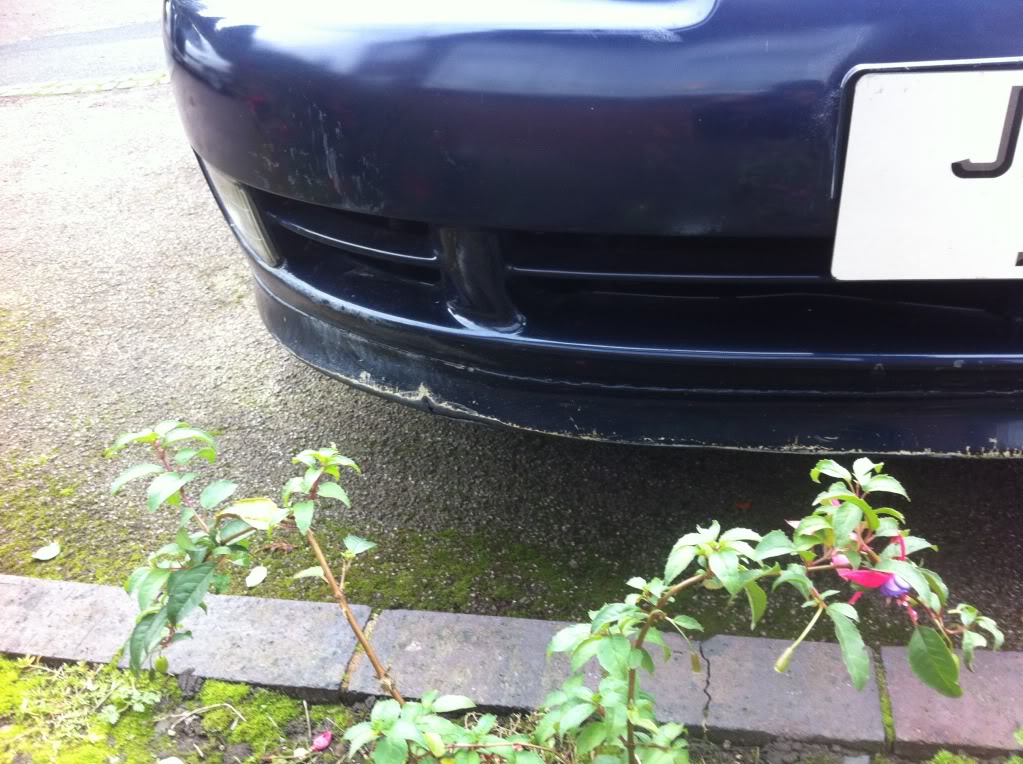 10 points to anyone who knows what this writing means: 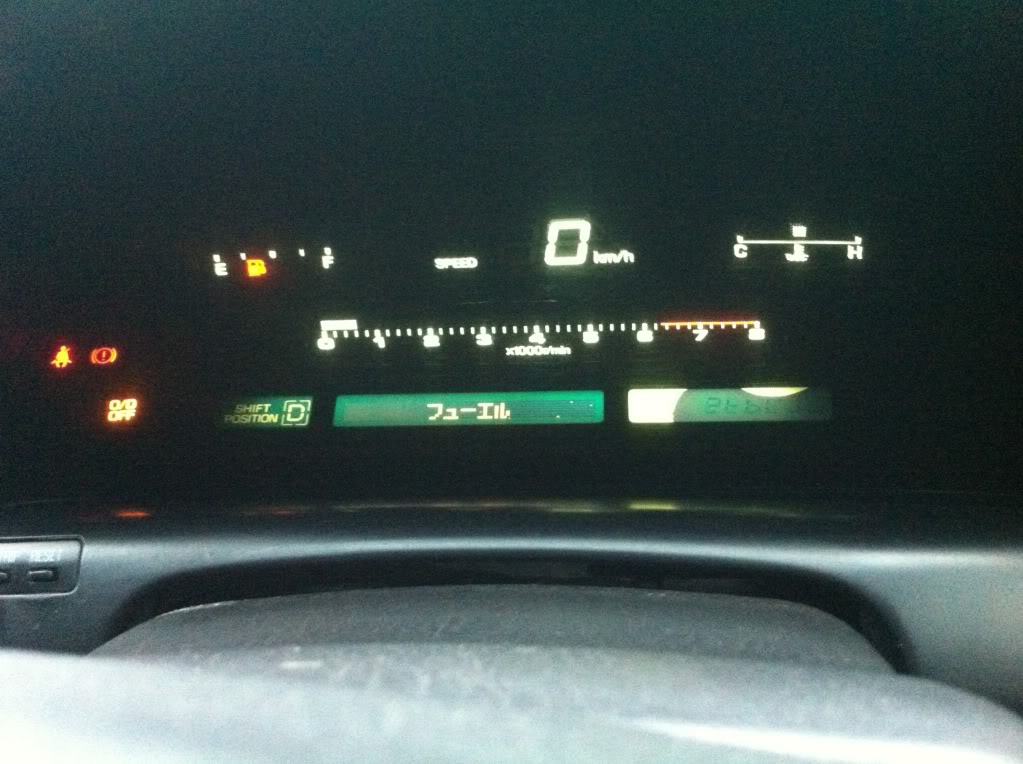 The rat look is coming along a treat there Dom

So, when are you going to learn Japanese then?

CitroJim wrote:The rat look is coming along a treat there Dom

So, when are you going to learn Japanese then?

For lols my girlfriend bought me a "Learn Japanese in 30 days" book, I've not started it yet mind..

I gave the car a wash earlier and I'm coming to terms with the state of the bodywork and I'm considering just sorting the nearside rear corner and drivers door rust, as well as the small patch above the offside rear wheel arch, and leaving the rest! My mate with a Toyota Altezza (a 4-pot Toyota/BEAMS tuned Lexarse IS200) wants me to spray the splitter red to match the spoiler

I get the feeling the car has been lowered at some point, why would anyone lower a car with FULLY active suspension?? It's very easy to rectify though, with threaded linkages akin to the activa ARCS adjuster, undo a couple of lock nuts then turn a fixed nut which adjusts the length of the linkage. There's one in each corner with electronic sensors attached which tells the car what's going on with the body roll/pitch etc.

There's some good squeaks coming from the cambelt/aux belts region, and the cambelt is goosed, so I need to get some of those parts on order me thinks, it seems most of the tensioners/idlers are designed so you can press/drift the bearings out and replace them with bearings from a bearing shop!
Top

One careful lady owner was it?

Oops sorry I missed this post. Yes I think it was, a very blonde lady owner at that!

I've insured the soarer and driven it for the first time last week, considering it's meant to have 100% no bounce suspension, it does bounce like a good un. Feels exactly like a flat sphere so being a Citroen-ist I know this needs re-gassing. The chap I bought it off is a supposed Soarer specialist and assures me it doesn't bounce when it definitely does. I can't be bothered to try and get anything back off him so I'll whip the struts off when I get chance and set about rebuilding them. They all need new gaiters anyway so it's probably worth stripping them while they're off. One of the modifications you can do is to remove the standard pneumatic bleed screw and replace it with a valve (sounds easy doesn't it?

), that way you can easily top up the nitrogen in them. My brother seems adament that just air from a mountain bike shock pump would do, however I'm sure Citroen and Toyota both used nitrogen gas for a reason? A shock pump goes up to 300psi and the shocks need about 250psi in them. There's a genius method that I've read about that allows you to test roughly how much gas in the the struts. This involves getting a pair of jacks under the front corners to just start taking up the weight of the car, then undoing a hydraulic bleed screw on the top of the strut and measuring how much fluid comes out. A good shock with 250psi in should push out 250 ml roughly, any less and there are issues!

AFAIK there are a few o-rings that need replacing to 1 - stop the gas leaking into the oil, and 2 - stop the oil leaking to the outside world. It'll be interesting to get started on replacing these!

I've taken a video of it at full chat, it's not the fastest thing in the world but it does sound very nice

Dommo wrote:The chap I bought it off is a supposed Soarer specialist and assures me it doesn't bounce when it definitely does.

That doesn't surprise me Dom

This is interesting on the suspension units

Nitrogen is used for very good reason. It's inert and thus cannot react with anything it comes into contact with. It is also dry. Air from the sky is wet (surprisingly so) and contains (amongst other things) oxygen. It's oxygen that's the problem. It's very reactive and will, along with the moisture, start oxidizing (corroding) things inside the shockers...
Top

Oops sorry I missed this post. Yes I think it was, a very blonde lady owner at that!

I've taken a video of it at full chat, it's not the fastest thing in the world but it does sound very nice

Which is why I dont like driving my sister car... On the plus side, a lot of people choose to park away from your car in car parks

Where is this video?


Edit - wow, didn't realise how small that video is on photobucket! Looked sizeable on my phone

And of course, that wasn't realllly in k's.. it was in feet per hour, I was actually going less than the speed limit you understand

A couple of things have changed since I last posted. I've spent some money for a start!

I've bought a set of uzz32 clocks (uzz32 being the VIN code for the active soarer) to replace the old non active clocks, this gives an extra test in the diagnostics to check that the four wheel steering system works properly, and also includes an odometer so I know how many miles I've done, which is nice.. Also fitted a KPH -> MPH converter at the same time, I've not really tested either of these to know if it has worked but I'll give it a go when the time comes.

And the front offside strut still leaks and I think the nearside front brake has past it's best, pulls horribly to the right when you stand on the brakes! 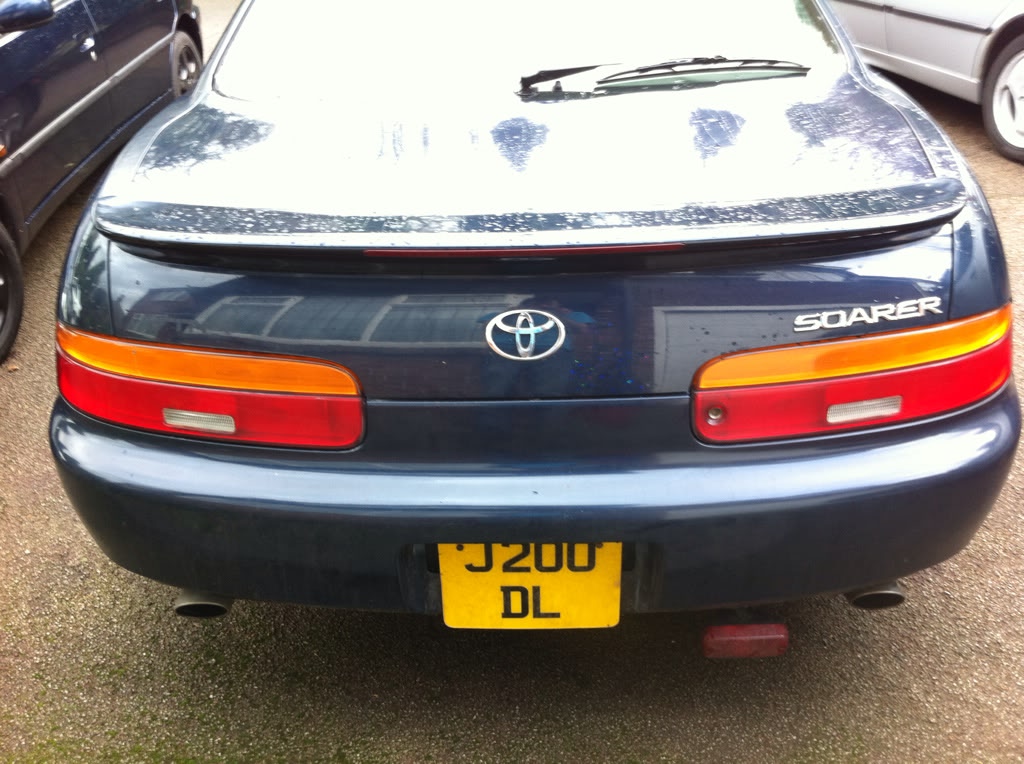 Something my dad tried to sort before was the non working EMV (the touchscreen), on removal we soon found the problem: 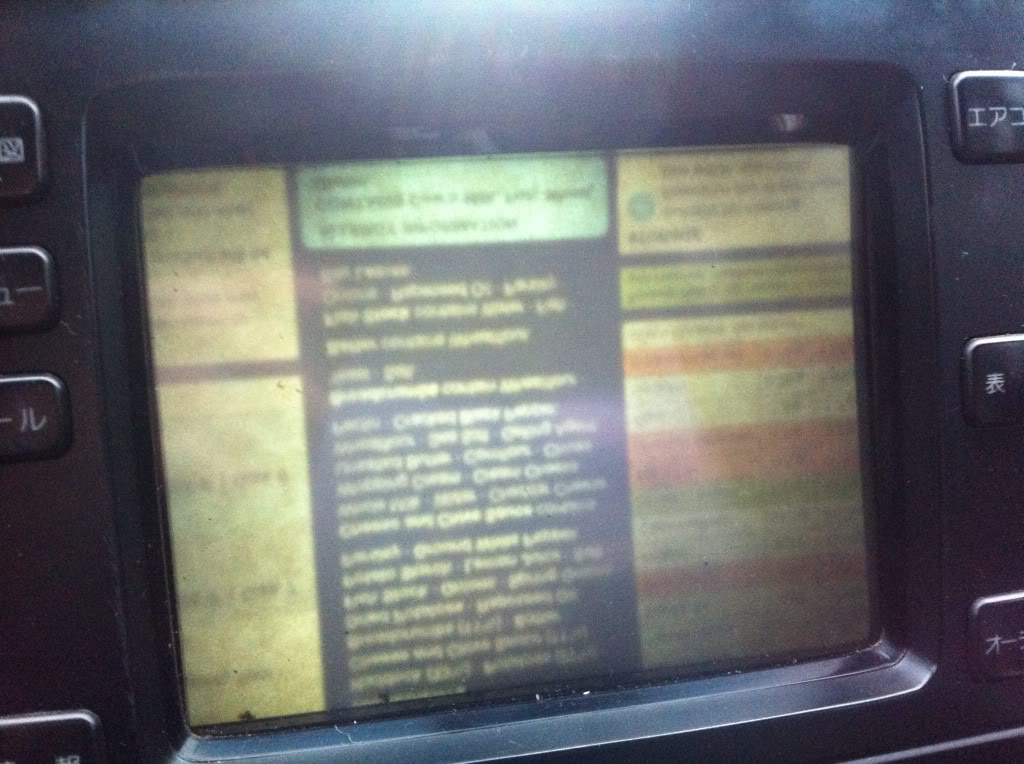 Someone had removed the whole unit and replaced it with a piece of cardboard, which you could only tell once you had removed it and got some light behind it!

We then set about removing things to get the dirty carpet out, surprisingly to get to this stage took only a few minutes, all the screws and bolts were wrong though unfortunately so gawd knows how long it'll take to get it back together again 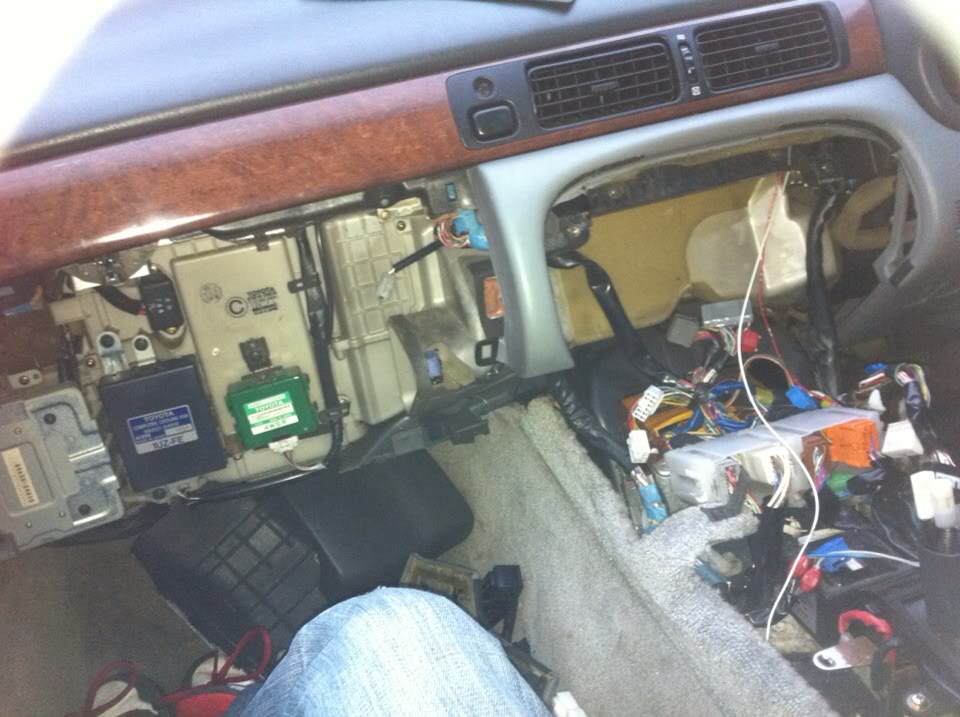 My first JDM YO currency 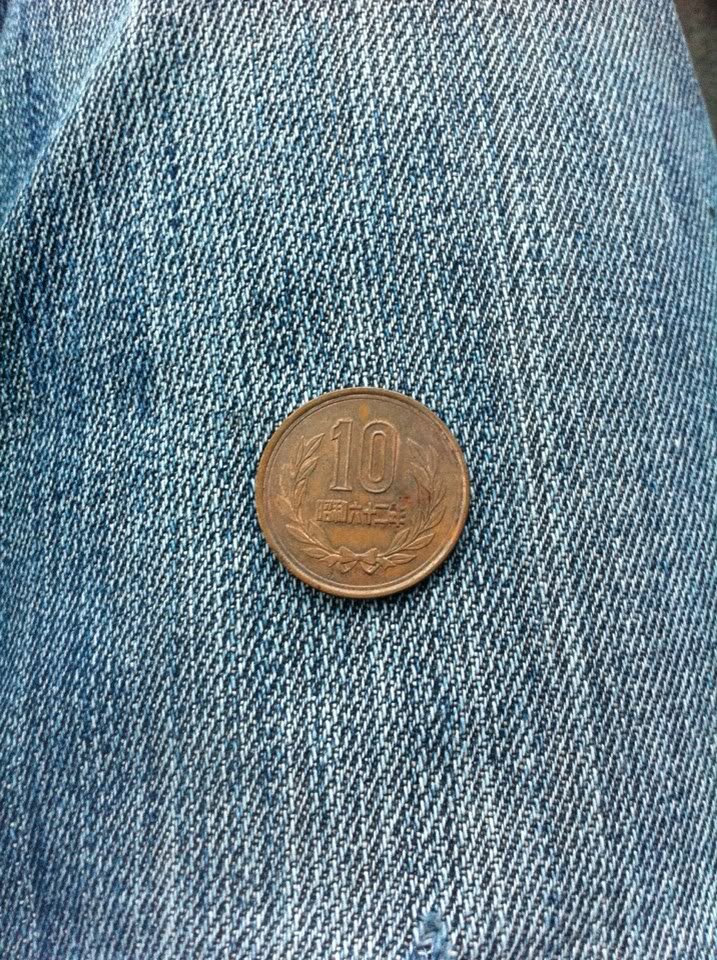 After I got the carpet out we set about cleaning it, first with washing up liquid which worked, but took FOREVER, so we decided to pour warm water and washing powder all over it which seemed to do the trick, until the next morning when we discovered it had bleached it, so rather than being a grey it's gone blue in the most soiled areas (and therefore the areas most covered in washing powder). DOH!!

Turns out it's a woolen carpet, very very posh you see

More to come in the near future - Dom
Top

That's well on the way to being a sorted car.... Good work sir!
Top

Getting hold of parts not proving to be too bad then?
Top
Messages: 140