Excellent on both counts Dean

Here is some pictures of mine Activa

What about the height? good or bad? 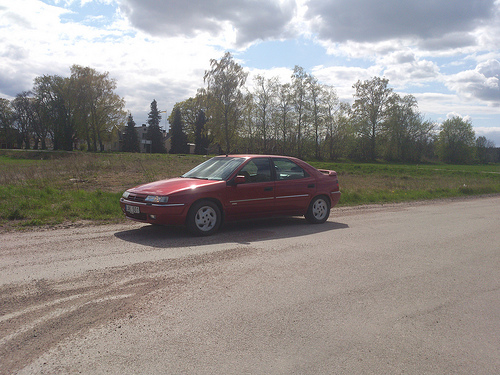 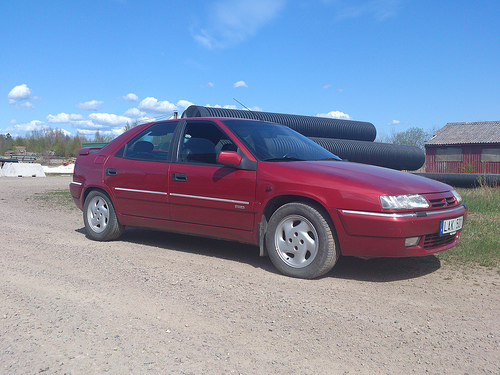 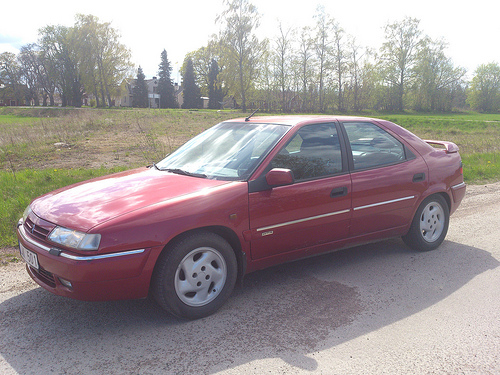 Height looks good Robin, maybe just a touch low at the back

nice car Robin, i like that colour a lot.

Deanxm wrote:nice car Robin, i like that colour a lot.

are you going to replace them with 17's?

Had a visit from a Fellow citroen nutter today, turns out his father is a dedicated Citroen nutter too and im pretty sure he came to look at my XM 6 or 7 years ago, i have also been there to see about some xm's, its a small world, well island anyway.
Took him out for a ride in the Activa to show him what they were all about, i think one brisk corner got the message across. You must be a bad passenger like me Pete

Ive completed the first half of my cpc course this week and just over 700miles over the four days running back and forth each day, one thing became clear in the first day of travel and that is the Activas tyres are shot, the rears were like new but were very hard and starting to perish, the fronts were odd and although my Sunfull tyre that got me out of a hole last year for no money gave good grip and even wear it was awefully noisy on the motorway the tyre the other side was a good one (cant remember the name) now but it was wearing very unevenly, having odd tyres on the front also made the car track differently on different surfaces which was very annoying when going from old to new tarmac and concrete surfaces, there were awefull wobbles from the back end for the first 15 miles too and a steering wobble between 70 and 90, all in all doing a proper run in the activa was a horrible experience.
The final straw came on wed going up the A3, i turned off following a new TT and as we turned on the sharp bend at the end of the sliproad the xant just let the arse go, trying to reign it in with some power was ok for a second untill it started understeering which is fine, it could be held on the throttle but this was at silly low speeds, it was like driving on ice.

Well all that is a thing of the past because she is now running the xm's Pirelli P zero's, ive gone from a 40 to a 45 profile too which has sorted the inacuracy of the speedo which now reads dead on (was annoying looking at the speedo and having to remember it overread by about 8%), just totaly transformed the car, smoother quieter, better handling and a dream at motorway speeds. The only critisism i have of the Pirelli's is they do take a lot of heating up, certainly you couldnt get them up to a decent temperature on the island without driving hire car style the whole time but other than that they are fine, the car desnt look so under wheeled now either like it did before.

Ready for another 700 miles now but in perfect comfort and safety. Other than this rubber related annoyance she has been fine, she used a fair bit of water but thankfully that was just from the washer bottle

1300 miles covered so far now and the course is over, just revising as much as possible before my exam in tunbridge wells on friday, im a little annoyed as having the course on a bank holiday weekend getaway means no ferries are available for me to get home so although i want the 6pm ferry from portsmouth to get home ive got to come back on the 21:05 ferry from lymington and its going to cost £60 one way the robbing barstewards! Activa is going fine apart from an electrovalve which is constantly clicking on and off for about 5 minutes after i park the car up, only does it after a long run but it will need looking at also the front nearside caliper is squeaking at all speeds at a pitch i can only just hear, with the window down its driving me bloody mad so i will have to look at them over the weekend once m exam is out of the way.

Oh running back and forth up the A3 at between 7 and 11mph (x10) i have been getting 34mpg out of the old girl which is ok all things considered, the new tyres have made all the difference too, not that i notice them on the island.

Thanks Jim, it sounds like its coming from under the front footwells, not really had time to look or stand around if im honest, there is a hiss coming from under the car when you switch the engine off too sounds very much like an electrovalve leak and a few times now about a minute after starting the car she has jumped to the right and back to the left very suddenly but ony if stationary (before ive pulled away) its going to want a little fettle but if you have an idea what it could be to point me in the right general direction that would be most helpfull.
I know she hads got the Roy mackey clip in diode mod and i believe its an activa specific version although dont hold me to that, ive got the paperwork for it in the history file...................

Deanxm wrote:
Oh running back and forth up the A3 at between 7 and 11mph (x10) i have been getting 34mpg out of the old girl which is ok all things considered, the new tyres have made all the difference too, not that i notice them on the island.

You really need to be getting your foot down Dean, Activas are very capable with speed

Glad your Xant is going well given its recent high mileage use, they are quite a nice car for long runs and have a lot in reserve at motorway speed.

Tyres do make or break a car, ive had a few different ones on my Activa now and actually find what should be the worse tyres among the best tyres. Primewells, ive heard they are awful but in the dry at least I cant fault them. They were superbly quicky and no doubt awful in the dry but I have not had chance to test them yet. Far more grip than Michelins, Fuldas and Kumhos. I need to get my Pirelli P7s up front and test them out, they hold the back well though.

Good luck with the exam

Finnished the exam Friday, pretty sure i passed the first but im not confident about the 2nd case study exam

only 6 weeks to wait till i get the results........................
Friday was a long day and it took me nearly 4 hours to get back to lymington, i then had to wait till 9pm to get a ferry home, the activa is going fine still but it does want some attention, the squeeking osf calliper being one thing and a leaky down pipe to cat joint being another but i seem to have cought man flue that Ellie has passed on to me so im spending the bank holiday snoozing and generaly doing nothing

i went into work yesterday to continue welding up my frame for the carport but feeling rough i just couldnt get into it and gave up after half an hour (yes i know im a wimp) picked the xm wheels up from work to bring home too, i am toying with the idea of having them painted to match the body colour of the car leaving the stainless trim as ive already sand blasted and painted the front and rear callipers but im not sure if it would look a bit too much if you know what i mean...............might be handy to do a photo shop job on a picture of the car to see what it would look like but that will have to wait, ive got two weeks off starting next weekend so i need to get the carport finnished and errected, then make the gates and then all my time can be put back into getting the xm back together. Cant wait to get her back on the road again

Stopped into the dealers today to pick up my hight corrector diaphrams and dust covers for the activa, also ordered some new handbrake cables as the others were creaking and the o/s one was sticking a little and making the pads drag, im hoping this is the cause of the squeek, if not i will put a spare calliper on, also ordered up a new downpipe to cat gasket and daughnut manifold seal and fitting kit while im at it, got the Vic check confirmation through today too so i will give them a ring in the morning to pay and sort out the booking hopefully next week and then she will be put up on car and classic.................im going to miss this car i can feel it.................

Its replacement has already been inspected while i was in Guildford a couple of weeks ago, its a 54 plate 1.4 6speed Fiat Stilo Active, its got all the toys, looks reasonable and will do 55mpg on a run, most importantly though i can tool about in it and use it without fear of damaging it and run it into the ground if i like, obviously it will be looked after, my automotive ocd will ensure that happens, but its just a disposable motor, got insurance lined up at £200 fully comp with all the extras too so thats a result.