I'm looking to buy a 3-4 years old 407 with a 2.0 HDI engine and got my eyes on one from 2006 with an automatic transmission. It has 177.000 km on the clock and while I have previous experience with Peugeot HDI engines in terms of durability, I have no clue what to expect from the automatic transmission and an overhaul would just be too expensive.

Has anyone gotten any experience with that? Any word of advice? Should I steer clear of used Peugeots with automatic transmission all together?

Thanks a lot in advance.

Hi,
I think it largely depends on the make of the gearbox, Assuming the 407 is a pug C5 I think it will be one of three possibilities.

Unserviced the 4HP20 seems to be good for about 225,000 kilometer (aprox), at which point it may very well need a re-build. The AL4 is far less robust, mine is on its way out at 160,000 kilometers, I've heard of AL4's going longer, but most don't seem to last.
I stress the above figures are unserviced, for some reason the AL4 and 4HP20 gearboxes are marked 'sealed for life', meaning after a while the oil breaks down and kills the gearbox, I've heard of people having much longer lived gearboxes through regular oil changes.

As for the later Aisin AW 6 speed, don't know too much about that, its quite new to PSA cars. What I do know is generally Jap autoboxes are very solid, I've been told by some mechanics these new PSA fitted auto boxes are much better than the old ones, therefore if the car has an Aisin AW its probably safe.

As I would say to anyone thinking of modern 'sealed for life' automatic, the lower the miles the better. The sooner one starts regular oil changes the more reliable the autobox will be.
Top

Thanks a lot for both your repsonses. I had a hard drive cash and did not have access to a pc for the past few days.

The car does not have a 6 gear transmission, so I suppose that makes it either an 'AL4' or '4HP20'. Reading dieselNJ's comment, I think there might be hope i.e. it might have a 4HP20 (good box

). The question is how I determine which one it has. Are there any other indications?

Thx dieselnutjob I was unaware of that.
In which case citroDane if your looking at a 16V HDi (highly probable given the age) then it will have the 4HP20, good news

As for visual indications, the 4HP20 has a identification plate on the top towards the front right (when looking under the bonnet), you will probably have to remove the air box to see this plate, it should clearly have the ZF logo and say 4HP-20, plus a load of identifying numbers.
The AL4 probably has something similar, will check my car later.
Also under the bonnet the heat exchange unit looks quite different, the 4HP20 being most distinctive for its two double circles in a raised oblong on top of the gearbox, you can clearly see on this image. 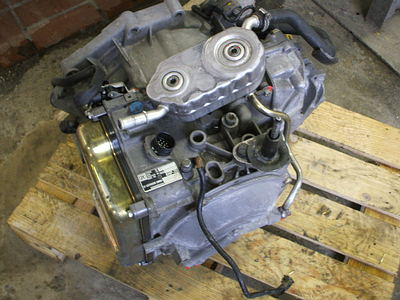 The AL4 heat exchange is a rough horseshoe shape, situated at the back of the gearbox, not easily visible form top, but you can see the pipes going in and out.

If you cant find this under bonnet, its possibly obscured with airbox or other items, you could check underneath. Both gearboxes have different drain plugs, the 4HP20 has a drain plug, where as the AL4 as a plug within a plug style, see this photobucket album, this is a AL4 on a C5.
http://s168.photobucket.com/albums/u171 ... roen%20C5/
Not my photo's thanks to jackafrica who ever you are.

I hope this helps.
Top

Firstly, thanks for all your replies.

Sid (_the_Squid), thanks a lot for your comprehensive reply (you really are spoiling me

). I guess if I can't get a good look at the heat exchange unit, I get a hold of a Mechanics Mirror and try to read that metal plate. So two good places to look for an indication. I can't go wrong.
And if I do, as you suggested dieselNJ, I'll try to get the chassis number and go to a Peugeot parts dealer (good idea).

As said by Sid, regular fluid changes are vital. The filter clogs eventually and damages the 'box and often the torque converter.

EDIT: they must only ever be refilled with the correct ESSO LT71141 ATF. Normal Dexron (the red stuff) is a death sentence to them.

The are very amenable to repair though but spares are expensive and some special tools are required.
Top

Wow, those pictures of the repair procedue are amazing. I've never done any gearbox repair job, let alone on an automatic one (I'm basically your zealous DIY type guy). But this is pretty actually pretty encouraging.