Well I picked up my latest Citroen today.... 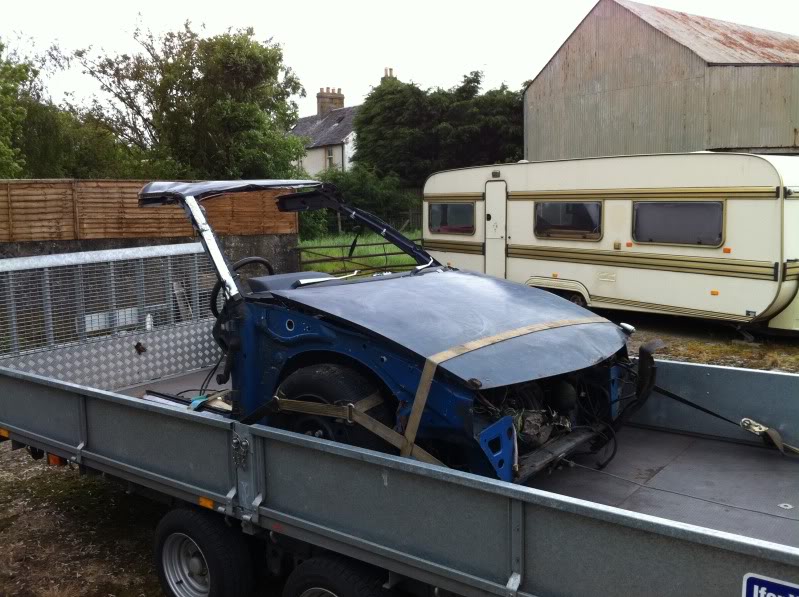 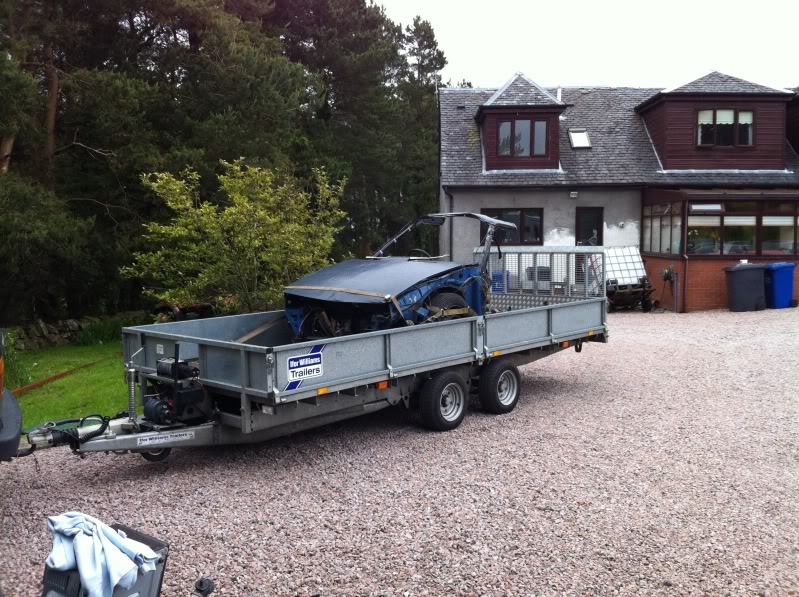 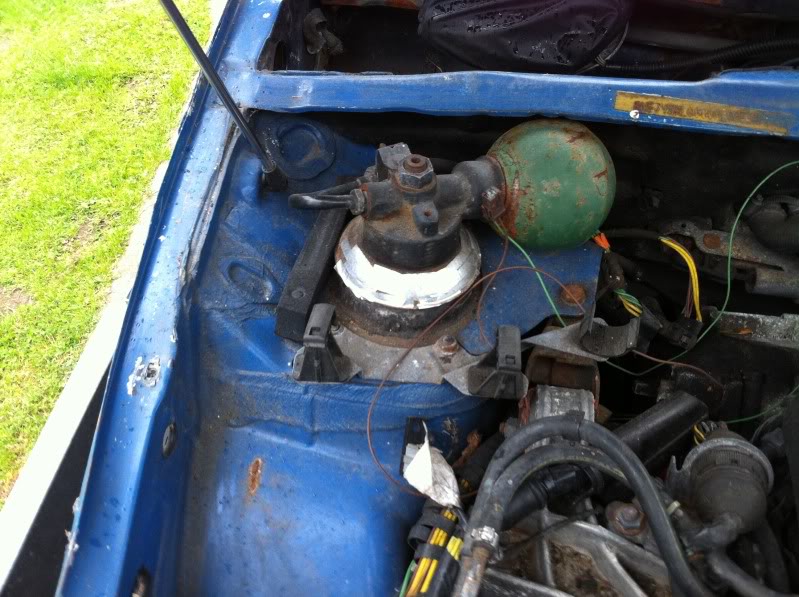 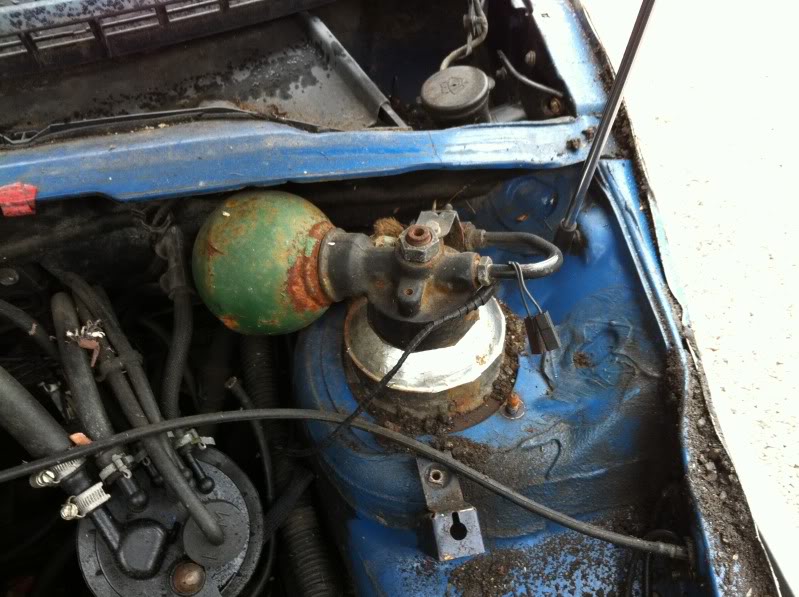 I bet you're all now wondering why I bought half an XM... 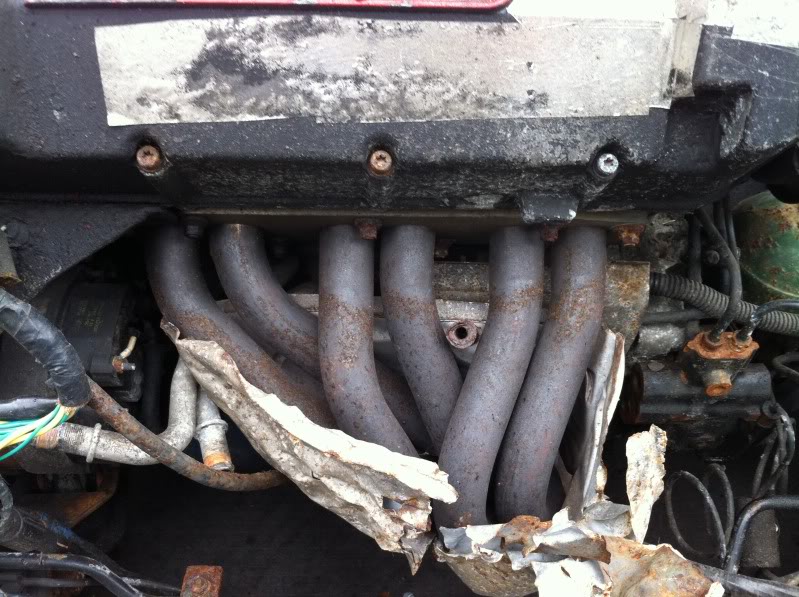 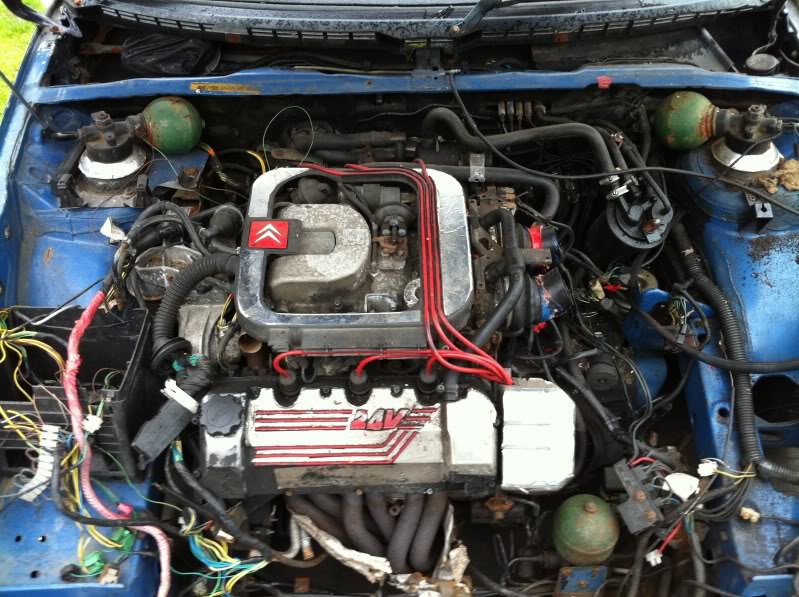 A quick polish and all will be well I'm sure!

The first question that pops into mind is how...then why! What's your plans for it David - going to convert one to a 24V?
Top

Hah! A short Xm rather than a stretch

Well according to the previous owner the reason it's days came to an end was because the clutch had packed in....

Most normal people would change the clutch or take the whole car off the road.

This guy took a oxy/acetylene torch and cut the car in half so that it was easy to store and still mobile.

He then decided he was going to take the engine out of the car, twin turbo it and use it in a kit car.

Luckily for me though... a lack of funds and ill health stopped him from doing it so he sold it to me... I've got the ECU as well which isn't in the pictures.

I'm hoping the wiring loom isn't damaged as I need this for mine, apart from that, I'm going to keep the engine and gearbox as a spare.

Its previous owner does sound a little eccentric!

Easy to store! Where has he hid the rest of it, under the mattress!?

Im intrigued by the colour, that bright, in your face blue which the inner wings and engine bay show dont ring as a true XM colour.

Some people have some odd ideas, surely it would have been even easier to store just the engine and box

His argument was.... It's a heavy engine and gearbox at least with the wheels on it you can pick it up and wheel it around with two of you.

Ahh well, at least a very rare engine has been saved...

Must have been fun driving it around with only the front wheels.... The shower of sparks must have been a bit spectacular...
Top

CitroJim wrote:Must have been fun driving it around with only the front wheels.... The shower of sparks must have been a bit spectacular...

If I had it I'd stick a couple of castors on the back, pop a seat in and have some fun with it!

I've been giving our HDi a bit of attention recently so I can try and get it in fine fettle.

It's had a new intercooler which has completely stopped the smoking problem. After seeing Jim's post about the Eberspacher heaters I decided to give ours a dose of looking at.

I took it off the car tonight and managed to get 3 of the bolts out of the top of it. 2 are small screws which came out no problem at all with the impact driver, the other two need a 4mm allen key (I think from memory), again, one of them walked out with the impact driver, when I got to the last one I was greeted with a rounded bolt from the ham fisted monkey who was in at it before

Oh well.... That's tomorrows job..... try and figure out a way to remove that last bloody bolt to reveal the glow plug!

Knowing where that bolt is David, it will be a bit tricky. On the plus side, they're not normally mega-tight. be aware that those two Allen bolts aren't identical, one is much longer than the other.

A good tip is to drive a larger Torx bit into the remains of the head to bring it out. The bolt will need replacing though...

CitroJim wrote:Knowing where that bolt is David, it will be a bit tricky. On the plus side, they're not normally mega-tight. be aware that those two Allen bolts aren't identical, one is much longer than the other.

A good tip is to drive a larger Torx bit into the remains of the head to bring it out. The bolt will need replacing though...

Better still, using an impact driver and a larger torx bit normally does the trick with stubborn rounded allen heads I find.
Top

Well, it looks like I'm not particularly good at this blog thing!

I got fed up looking at the Eberspacher in bits on the worktop in the shed... I took the side panel off it and spun the ceramic disc a couple of times, wasn't tight but was slightly stiff, free'd off nicely though. Put the heater back in the car and it still didn't fire up. Pulled out the pink relay to try and force it on to no avail so I've put the car back together and left it not working I'm afraid. I got fed up with the grief I was getting off Cheryl to get her car back to her in the end.

We've been looking around the yard and have decided that we need to have a clear out as well, we've got far to many car. Looking out of the back window we're into double figures and there's another three or four at the front of the house as well. In the next couple of months we're going to be selling:

I'm putting them all through an MOT in the next few weeks before advertising any of them.

Am keeping all of the XM's and the Activa though.

Will get some pictures up and some adverts made nearer the time though.

Well... At 2.30am I finish doing prep work for my MOT this morning on the V6 24v XM. At 2am I finally got away from the front end and got the covers back on the engine, I then turned my attention to checking the exhaust system over properly.

I noticed the back box was really scruffy so at 2am I decided to change that for a good one I had in the shed, what an awkward job on the 24v due to the size and weight of the centre section.

Previously at around 11pm I noticed the windscreen washers weren't working so I had a look at the pumps in the reservoir and noticed the front one was seized solid so I swapped the front with the rear.

I sent it for MOT at 8.30am this morning, at 9.45 the tester came to see me and told me how tidy a car it was and that it had passed with flying colours. Only advisory I got was a tiny little hole in the centre section which I knew about. I've picked up the new one today so I can change it when it gets bad.

As a well done I gave it a full tank of V-Power and took it for a lovely run down the backroads home. I'd forgotten how much fun the 24v is, how good it sounds and had definitely forgotten how well it goes in 2nd and 3rd gear.

Still, a lovely result and well worth all the hard work

Those PRV 24v XMs are a bit magic - they sound like a top-class symphony orchestra. Beautiful 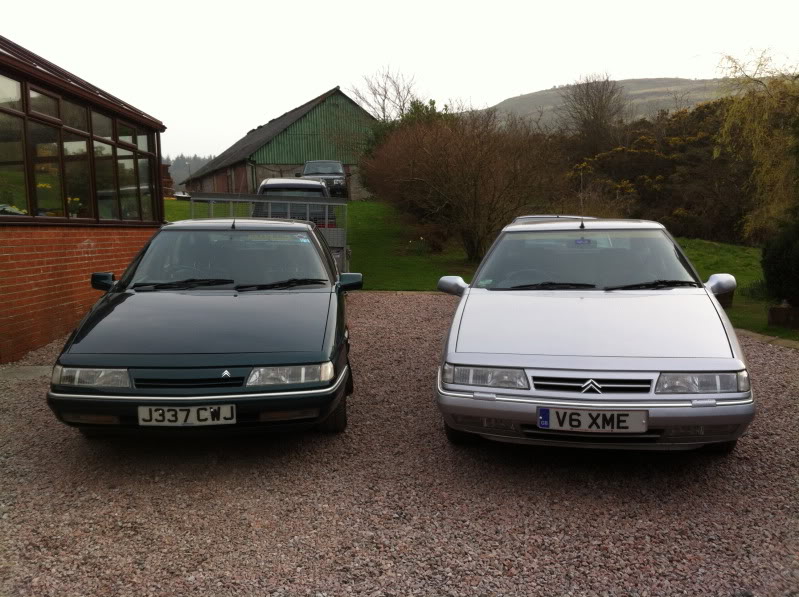 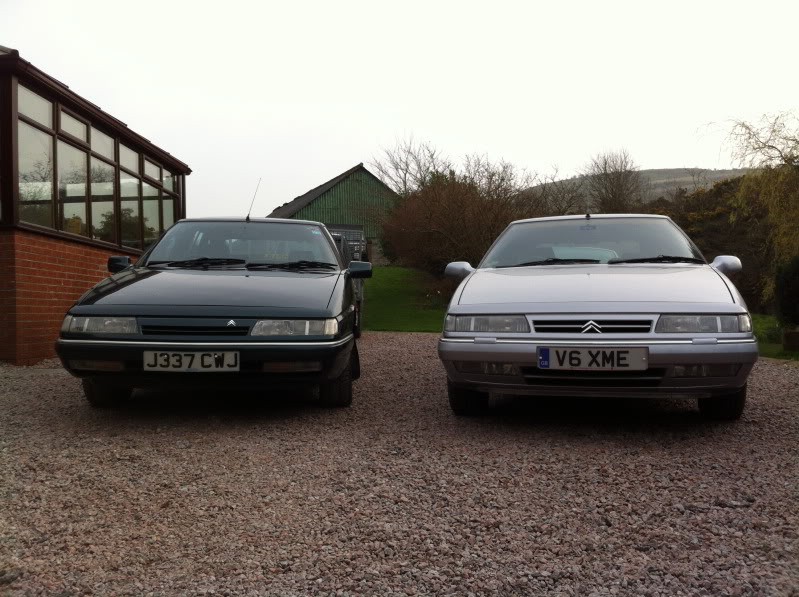 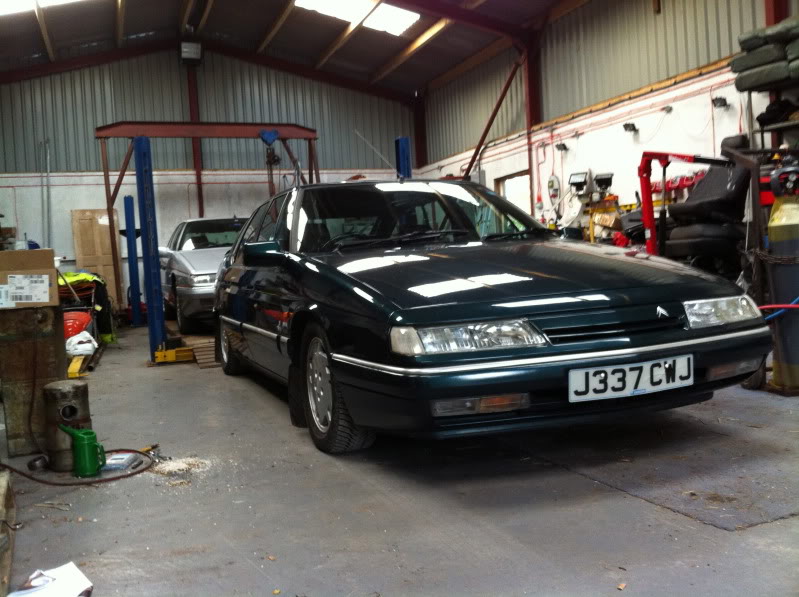 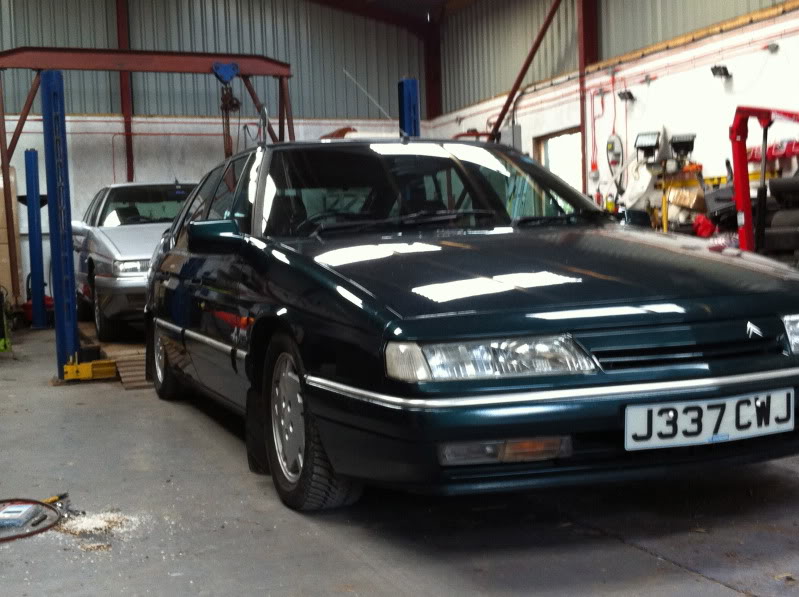