Empty trailer weighs 900kg but the garage don't have room to store it so it needs to come home with me unfortunately.

When does it have to be moved by?
Top

Main thing is, you're OK and secondly all of value was recovered, not least the Activa!

Keep us posted on the conversion progress

A little birdy tells me the V6 transplant is going very well Jim, in fact I'd be surprised if it isn't finished by now based on the progress this morning where the engine was already up and running.

I look forward to seeing the full report.

Mandrake wrote:A little birdy tells me the V6 transplant is going very well Jim, in fact I'd be surprised if it isn't finished by now based on the progress this morning where the engine was already up and running.

I look forward to seeing the full report.

Well a MASSIVE Thank You goes out to Robert, Barry & John at BL Auto's in Welwyn Garden City.

Despite my efforts to travel down on Friday to be there early going to pot they have still turned this around in a weekend.

They were meant to have my Activa to start work on it on Friday afternoon however I arrived at 18:35 on Friday. They did however get the car in, on the ramp and have the exhaust off it on Friday evening. This is the last time the TCT engine ever ran in my Activa as the hydraulics were depressurised for the final time under TCT power on Friday 6th June 2014. I can't figure out how to embed the video so click on the link below:

I went to the hotel on Friday night and fell asleep at 22:00 and woke up at 08.30 on Saturday morning, over an hour after I'd wanted to as I had fallen asleep before setting an alarm on Friday night.

I got to the garage just after 09:30 to find that the last couple of engine mounts needed to be undone and the TCT was free to come out. 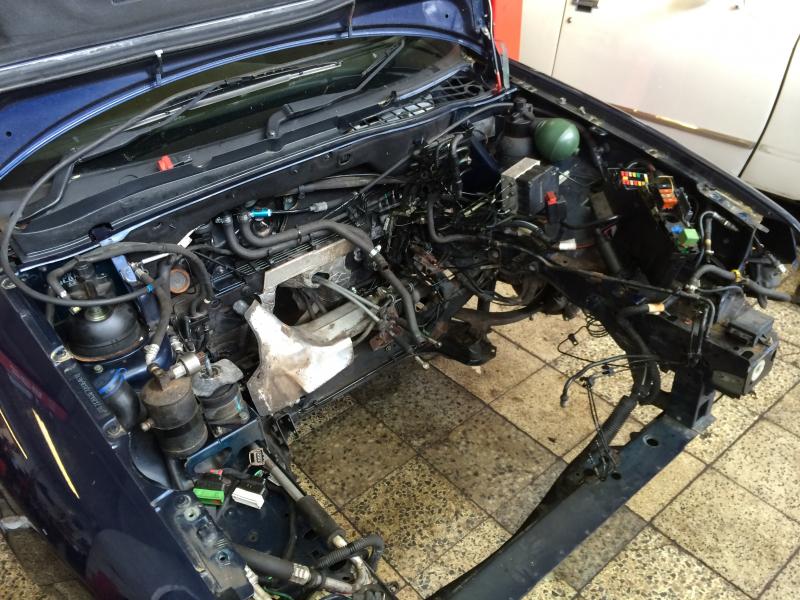 Everything was then changed over to the V6 components, steering rack pinion, pipework, etc. Whilst Robert & John were doing this, Barry was giving my engine a once over and cleaning up anything that I might have missed before sending the engine down.

The V6 engine then went in without any giant problems: 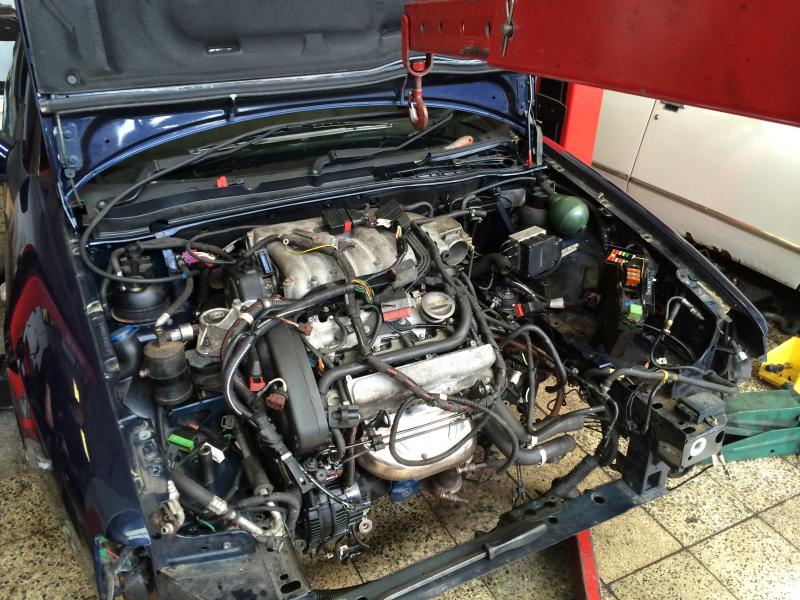 After all of this was done, the mounts were connected up, all of the piping etc. was connected up and there was oil added to the engine and gearbox the car was left overnight on Saturday.

On Sunday morning, Robert wasn't happy with a couple of hydraulic pipes so he swapped them over to make sure that they were spot on. Shortly after this, the cooling system was filled with water and the engine was ready to be started. This is the first time the V6 engine was run in the Activa. It had been running for a second or two before I managed to get the camera recording on my phone:

This was before the exhaust was put on the car hence it sounding a little noisy.

The front of the car then started to go back together: 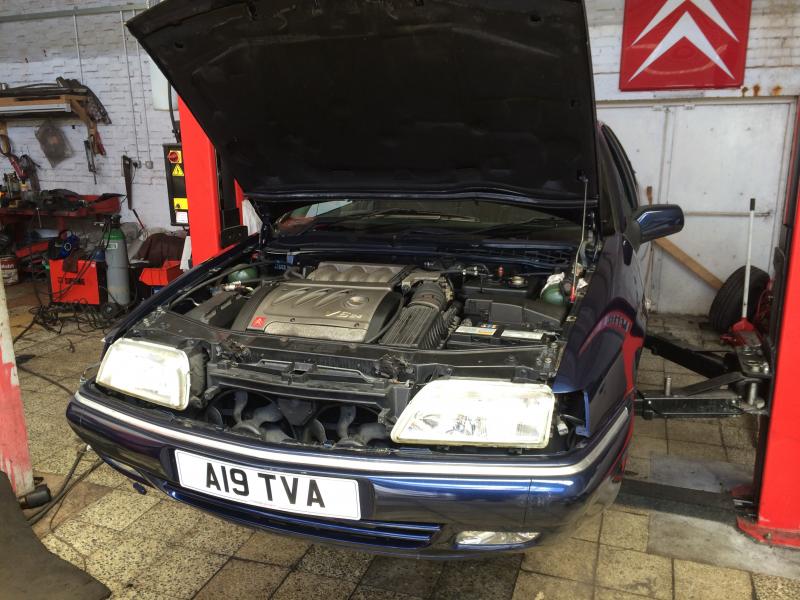 The back bumper was then modified to take the V6 exhaust. It actually sits in the cut out perfectly. 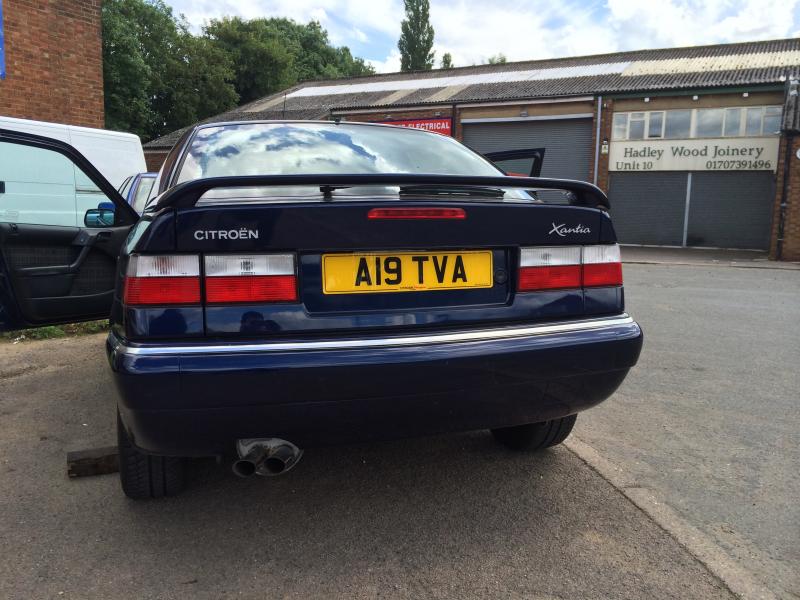 Initially when trying it on the ramp, it felt as if the gearbox wasn't engaging 2nd, 4th and reverse properly which was infuriating as the gearbox had just been reconditioned. Robert then took it for a quick run and said that it was engaging properly after it had been moved so it was probably just needing to move to settle in as it had just had major surgery.

Robert then came back form his run and asked if I wanted a go. I grinned and jumped in. The transformation just moving off in first gear is phenomenal. The car is so much smoother and quieter and is just perfect! It has totally changed the car and it is 100% better then it was before. It pulls all over the power band rather then needing to be "in the zone" like it does in the TCT. I didn't get a chance to open it up as it was busy and I didn't want to be away too long in it as there was still the heater matrix to do.

John then set about taking the dashboard apart to do the matrix: 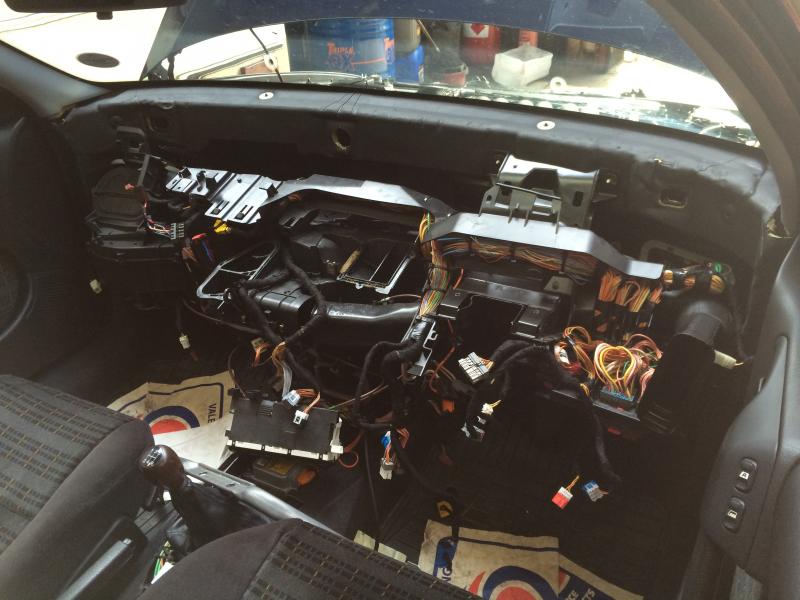 Unfortunately the heater matrix that I bought on eBay as being listed for a Xantia, isn't for a Xantia so we're having to try and source a genuine Valeo matrix tomorrow. The pipes on this one face the wrong way: 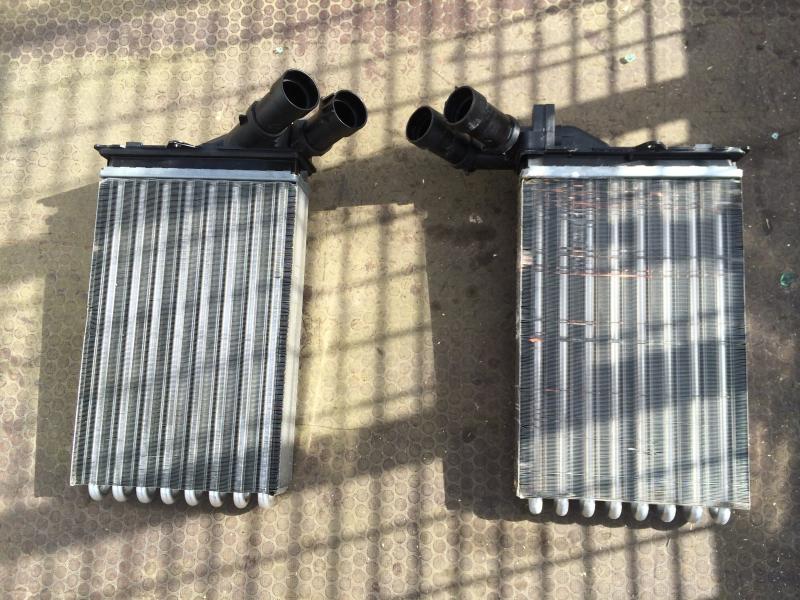 It's a bit of a shame as it would have been nearly finished today had we had the right one.

Anyway, the Activa is now a V6 and it's perfect. There isn't a rattle of vibration from anything. It's got all new engine and gearbox mounts and it just behaves as if it should have been there since day 1. The only issue is it seems to be idling slightly high. The fault code stored is for the idle control valve which I can resolved once we get the car home.

The catalytic converter on my V6 donor car was aftermarket and tiny so I bought an original cat from BL so that I had a proper one on the car. You can see the difference in size below: 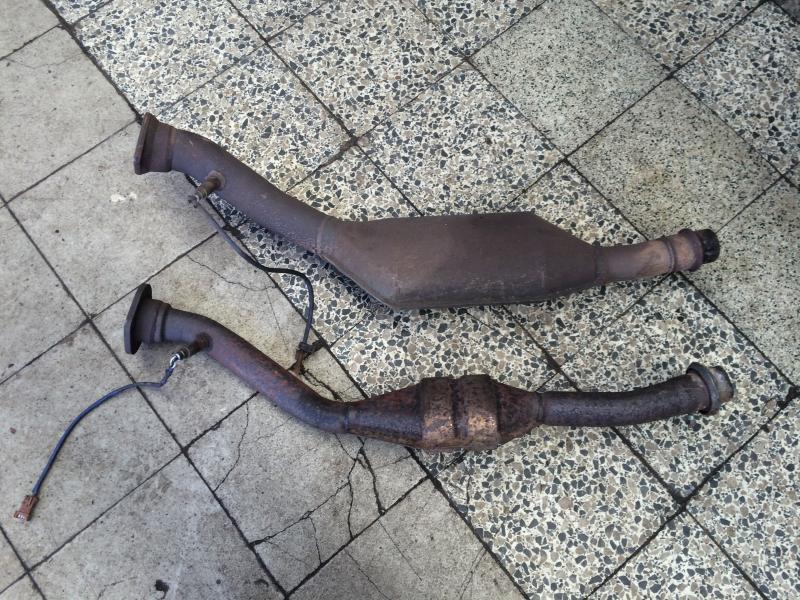 The Range Rover shopping has commenced as well as I'm trying to get back home to Glasgow with minimal fuss. I think I might have found one so all is starting to fall together

DHallworth wrote: However, I'd just like to repeat **MY ACTIVA IS NOW A V6**

Nice result despite Rover throwing a spanner in the works.
Top

A bummer about the heater matrix though!

The fact that it's a mirror image is just bizarre... I'm glad to see I'm not the only one who suffers from 3rd party parts not being "as advertised" ! Hopefully you can find one today to get the job finished.

Regarding the high idle, what is the exact fault code and how high is the idle ? If you haven't fixed the idling problem by the time you read this I have a few suggestions of some quick easy tests.

First check key on engine off and make sure the ICV is vibrating - you should hear it hum as well if the surroundings aren't too noisy. If it doesn't vibrate at all there may be a problem with the ICV/wiring/ECU.

Assuming it's humming, try unplugging the ICV connector during a hot idle - it should actually increase the idle when you unplug it as the normal "rest" position of the solenoid is about 40% open, which gives a hot idle of around 1000 rpm. On a cold engine it won't make any difference as the commanded opening is about the same as the natural rest opening.

Next thing I would try is disconnect the idle bypass hose from the air filter box and try blocking it while it's idling too high - if it doesn't stall (or at least drop below normal idle) then you must have a vacuum leak somewhere, maybe one of the crank case or cam box breathers is broken, (they're brittle as hell at that age, one of mine broke when I had the fuel rail out) and because they are connected after the throttle plate any significant leak in the breather system will cause a fast idle.

If blocking the idle bypass hose stalls the engine (as it should) but it still idles too high then the ICV may be stuck and need cleaning out. (I've read they can also fail by the magnet becoming demagnetised which means replacing it...) Checking the Idle Valve OCR % on the Lexia may be helpful too - normal at a hot idle with no A/C is about 28-33 % or thereabouts. If its really low (below 25%) the ECU is trying to close it down to compensate for the fast idle.

The bad news is that if it still has the original hose clamps on the two small pipes its nearly impossible (perhaps impossible) to get it out in place without removing either the upper inlet manifold or the coolant expansion bottle as you can't get enough access to get the hose clips off.

I replaced mine with worm drive jubilee clips with the worm screw facing in the right direction when I had it out so it's JUST possible to get them undone and the ICV removed without removing all that other stuff...

Sounds like you've already got a big grin on your face from the first test drive, I can't wait to see it in action with the V6 engine unleashed on a manual gearbox...

Interesting that you say that it's quieter than the TCT engine as I found your TCT pretty quiet inside... also I'm intrigued to see whether the V6 will have a worse or better fuel consumption than the TCT when coupled to a manual gearbox - although I suspect the first few drives it will be worse as you won't be able to help yourself...

Is that a LHD Xantia matrix?

Where did you source a new V6 upper engine mount? They have been NFP for several years.

My experience is that you need to drive a manual ES9 quite carefully to match the economy of a 4HP20.
Top

Re: Re: David Hallworth's Blog aka All Things V6!

Mandrake wrote:
Interesting that you say that it's quieter than the TCT engine as I found your TCT pretty quiet inside... also I'm intrigued to see whether the V6 will have a worse or better fuel consumption than the TCT when coupled to a manual gearbox - although I suspect the first few drives it will be worse as you won't be able to help yourself...

I would be interested to know how the economy stacks up against an auto V6 too. I'm currently getting around 31-33 mpg (accurately measured) out of mine.

As for the noise - the V6 is way smoother and quieter than the 2.0 TCT.
Top

Re: Re: David Hallworth's Blog aka All Things V6!

It looks fantastic! I hope you enjoy it as it should be enjoyed David.
Top

Really pleased to see it's coming together after all your efforts, it will certainly be a fantastic car. Looking forward to maybe experiencing the "full Activa" trip someday.
Top
Messages: 1861